A new ‘warm hatch’ from Peugeot has been revealed, called the Peugeot 308 GT. It’ll make its official debut at the Paris show next month. 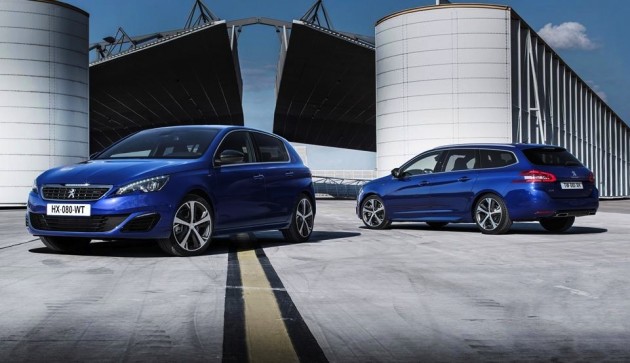 The 308 GT will enter the market in hatch and wagon forms, bringing a mildly sporty set of features and driving dynamics to the range.

Interestingly, the French company will offer the GT in turbo-petrol and turbo-diesel forms so it appeals to a wider audience.

For petrol buyers there’s a 1.6-litre turbo producing 150kW of power and 285Nm of torque. From there, the oomph is sent through a six-speed manual transmission and into a front-wheel drive system.

As for the diesel, it comprises of a 2.0-litre turbo BlueHDI producing 133kW of power and an impressive 400Nm of torque. It’s match up to a six-speed automatic transmission.

Performance figures for 0-100km/h are yet to be announced, however, we can expect more details at the car’s debut at the Paris Motor Show, including official fuel economy figures.

To help the GT stand out among the regular models, the exterior is enhanced with some new LED headlights and indicators, with a black diffuser section at the back surrounding twin-outlet exhausts.

Some tweaks are also made to the suspension to provide more sporty and direct handling, while a special responsive accelerator setting is added as part of the standard Driver Sport Pack.

Peugeot Australia is yet to confirm if the new variant will make it to local showrooms. More details will probably come at the Paris show, starting October 2. Stay tuned for updates.