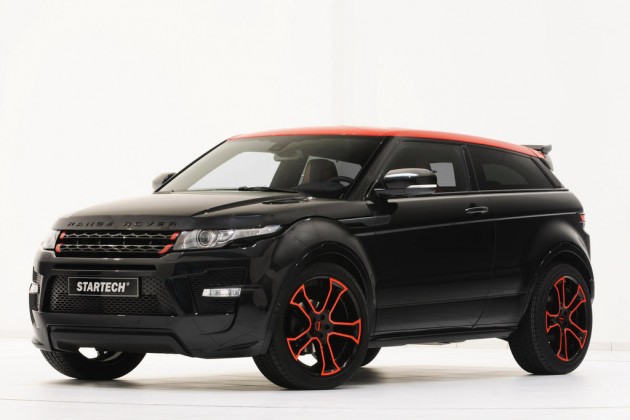 The Range Rover Evoque is an exciting new entry-level vehicle from the Tata-owned Jaguar Land Rover group, presenting not just a funky-looking SUV body, but it also promises to offer great on and off-road performance and elegance, all with the luxury and cachet of that iconic Range Rover badge.

Startech has come up with an upgrade for it which mainly focuses on cosmetic and interior modifications to amplify the Evoque’s natural characteristics – Startech has mentioned that it is working on some under-bonnet performance modifications for the future.

On the outside, the Startech Range Rover Evoque features a comprehensive two-tone bodykit with revised front and rear bumpers, as well as a rear diffuser and a large roof-top spoiler mounted on the hatch, for a more aggressive look

Blending in with the stealthy black with orange-highlighted bodykit is a set of two-tone black and orange Startech alloy wheels. These can be had in sizes ranging from 20 inches to 22 inches. Assisting in the ‘redback’ SUV style is a lowered suspension kit which brings the body down by 30.5mm.

Inside, there’s a number of Startech revisions including a full leather upholstery with Alcantara trimmings, a new sports steering wheel, aluminium pedals, and a set of sporty bucket seats to compliment the already well-equipped Range Rover interior.

As for the normal production Range Rover Evoque, which went on sale in Australia on November 7, pricing and trim level details are as follows: