As previously reported, Porsche has confirmed a new Porsche 550 Spyder (nickname) ‘baby Boxster’ is on the way. Information has now come through that Porsche is working on the ‘baby Boxster’ engine, which will be a new four-cylinder boxer item. 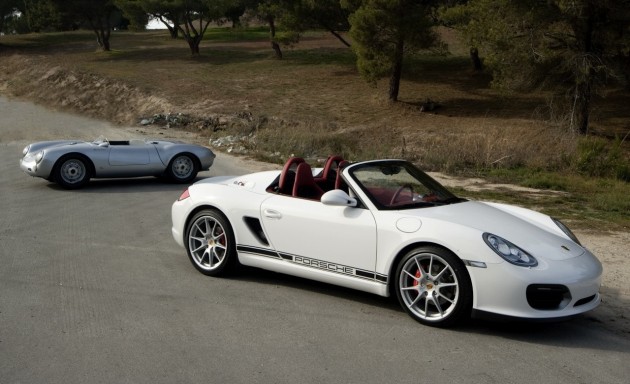 Full details and specifications haven’t been finalised yet but according to an Autoweek report, Porsche has commenced engineering of a four-cylinder engine based on the new 2012 991 Porsche 911 engine, dropping two cylinders. The same 4.65-inch bore will apparently be used offering an overall capacity ranging from 2.0-2.5 litres.

It won’t be a simple matter of cutting off two cylinders though, Porsche engineers will be ensuring maximum balance and torque is obtained from the new motor, as well as optimum fuel efficiency.

Being behind on power compared with a Porsche Boxster isn’t such a bad thing though as the new Porsche 550 is likely to be light in weight providing a very agile and fun driving character.

Perhaps best of all, the new Porsche 550 baby Boxster is expected to fall underneath the Porsche Boxster in terms of price too, and will become the new entry-level model in the Porsche lineup.

As far as showroom introduction goes, the new Porsche 550 baby Boxster is expected to hit the market some time in late-2013/early-2014. We’ll keep you posted on definite details as soon as we hear more.

A cheap and cheerful Porsche, sounds like fun. Any takers?