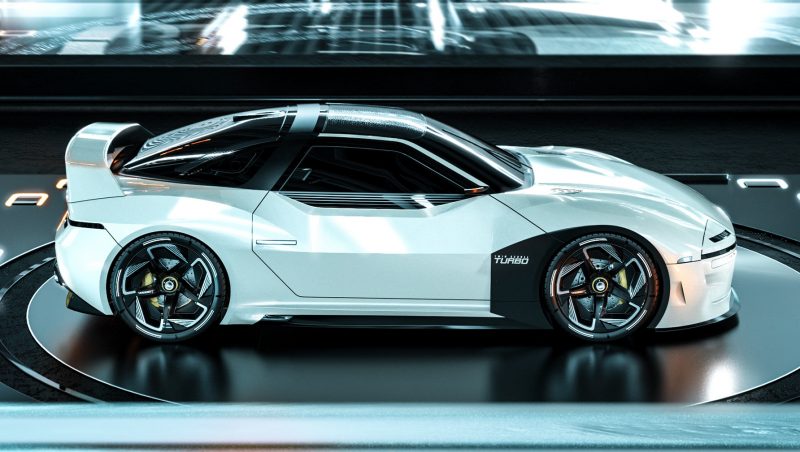 Can you imagine if Mitsubishi revived the iconic 3000GT (also called the GTO)? Well, relax your brain, you don’t have to imagine as someone else has already done it for you by creating these awesome digital renderings. Avid fans of the original Gran Turismo Sony PlayStation game, in particular, will remember the somewhat subtle and almost ignored Mitsubishi 3000GT of the 1990s. However, in its day there was no disregarding its specs and supercar-scaring performance.

It was originally pitched as a four-seat grand tourer to rival the likes of the Toyota Supra and Nissan 300ZX, but even to swipe some of the sales from the Nissan GT-R to some extent. At its peak, power came from a 3.0-litre twin-turbo V6 that produced 210kW and 407Nm. Acceleration could be dispatched in the high 5.0-seconds range.

Later in its life the power was turned up to 239kW and 427Nm, helping, among other things, to reduce the 0-100km/h time to the lower end of the 5.0-second range. A special GTO MR version appeared in Japan in 1994 (Mitsubishi Racing), showcasing a variety of motorsport-inspired enhancements – mainly comprising of weight-reduction measures. Before we get into these renderings though we must point out that, as unfortunate as it is, Mitsubishi does not currently have any official plans to resurrect the sports car. Last month, Renault-Nissan-Mitsubishi Alliance announced plans to enhance the competitiveness and profitability of each brand.

With this, the Alliance is set to pull some of the brands back from certain markets. Or as it calls them, “reference regions”. Essentially, each brand will focus on its core region and thus focus more rigorously at being the most competitive in that region. In a statement, the group said:

“Under this part of the scheme, Nissan will be the reference for China, North America and Japan; Renault in Europe, Russia, South America and North Africa; and Mitsubishi Motors in ASEAN and Oceania.” With Mitsubishi not focusing on North America and Japan, a halo sports car, which would be expensive to develop – especially if from the ground up – seems like it’d be the last on the list for the Alliance. Although, as Nissan is now a step-brother to Mitsubishi, maybe there’s scope or even a pipe-dream for the co-development of the next-gen R36 GT-R and a new 3000GT? We won’t be holding our breath.

Nonetheless, some very intriguing renderings have been created by artist Matthew Parsons. They are quite detailed, showing all angles and in various colours.

We absolutely adore the dished wheels, which seem both traditional and futuristic. There’s also plenty of inspiration drawn from the original GTO, including with the thin full-width taillight, the wrap-around rear windscreen, and even some of the original dimension characteristics like the front and rear overhangs were taken into account.

The artist has called it the 4000GT. An obvious successor and evolution of the 3000GT, but also suggestive of a 4.0-litre turbo engine. Perhaps even a twin-turbo V8? We’ll leave the power source up to your imagination. Whatever it’s powered by, we’re sure you’ll agree, it looks positively spectacular. And a fitting tribute to the icon.