Toyota is showcasing a special Toyota Mark X sedan at this year’s Tokyo Auto Salon featuring a full carbon fibre roof. It’s believed the car gives us a glimpse into the sort of technology we can expect in future Toyota and Lexus vehicles. 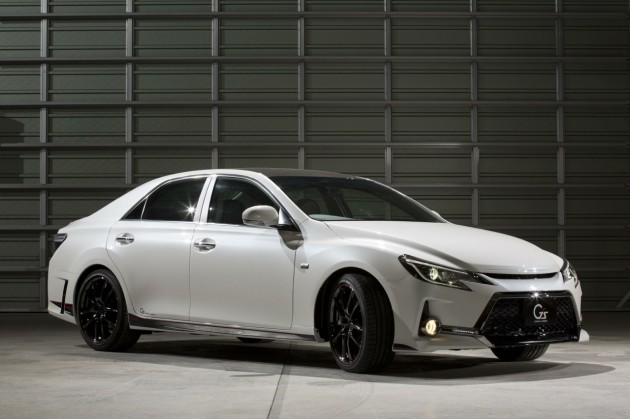 Even though production of the epic Lexus LFA has ended, Toyota isn’t letting all the effort that went into creating the supercar go to waste. It’s understood the Japanese company is looking to adapt certain areas of the supercar to its more mainstream vehicles of the future. We saw evidence of this earlier today with the unveiling of the new Lexus IS 250, which features a futuristic ‘human machine interface’ instrument cluster just like the LFA.

Will this mean we’ll be seeing a Toyota Camry in the next few years with carbon fibre panels? As ridiculous as it sounds, such measures could very well take place, but not in the name of performance like you or we might think. Instead, carbon fibre is universally known as a perfect material to help cars shed weight, and, in turn, reduce fuel consumption.

The Toyota Mark X (Japanese market only) on display at the Tokyo Auto Salon may only be a concept, however, according to a recent Automotive News report in the US, the facility that made the LFA, including its mainly carbon fibre structure, is now sitting in idle. Being at the pointy end of being the biggest car manufacturer in the world, speculations suggest Toyota may soon use this facility to manufacture parts for more mainstream vehicles. (Hopefully we see a carbon fibre Toyota 86 of some description in the near future.)

As for the carbon-roof Toyota Mark X, the lightweight roof saves 6kg in overall weight, and also lowers the sedan’s centre of gravity, potentially improving handling. Toyota hasn’t spoken of any plans to release a production version for the market (yet).