Lamborghini has pulled the wraps of its latest concept called the Lamborghini Aventador J concept speedster. The special model is a one-off creation, featuring no roof or windscreen, while offering a top speed of over 300km/h. 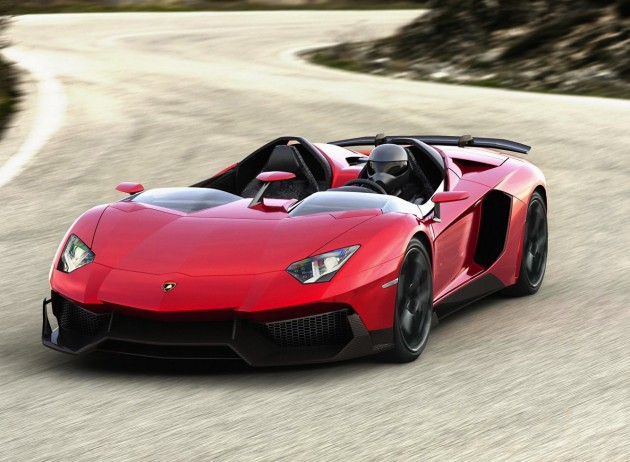 The Lamborghini Aventador J concept was revealed in leaked images on Sunday, however, this is the car’s first public unveiling. Lamborghini presented the concept at a special Volkswagen Group preview event to the Geneva show.

It is simply spectacular to behold, from every angle, like a true Lamborghini. Although it is based on the Aventador production car, this is far from production. With a lack of roof or A-pillars, it becomes Lamborghini’s new lowest vehicle ever made measuring just 1110mm in overall height.

Apart from the obvious divided two-seat layout, other highlights include a cool rear-view mirror which sits on its own in the middle of the dashboard, and a new deep-scooped carbon fibre front bumper bar, with massive intakes on the sides, as well as a carbon fibre rear wing and diffuser, and a jet-fighter-like quartet of exhaust outlets. 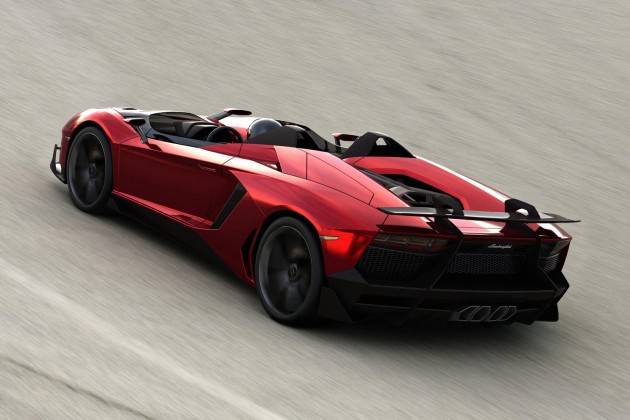 As previously thought, the Lamborghini Aventador J is powered by the 6.5-litre V12 engine as the normal Aventador. It produces 515kW of power and 690Nm of torque, matched up to Lambo’s new independent shifting rod transmission and onto an all-wheel drive system.

As for the name, the letter J pays homage to the 1970 Lamborghini Jota, which was a performance version of Lamborghini Miura. The letter J also relates to FIA racing regulations, and the ‘Appendix J’ defining the technical specification of race cars in various classes.

Lamborghini boss Stephan Winkelmann recently said that the Aventador J takes the company’s latest themes and extends them to the outer edges. He said,

“The new Lamborghini Aventador J is the most radical open supersports car of Lamborghini’s history. Its name comes from our tradition and combines an unconventional design with technology innovation.

“Nowadays we are confronted with several regulations that we face in the spirit of challenge. The Aventador J is the proof that, despite the rules, Lamborghini will always make people dream, even in the future.”