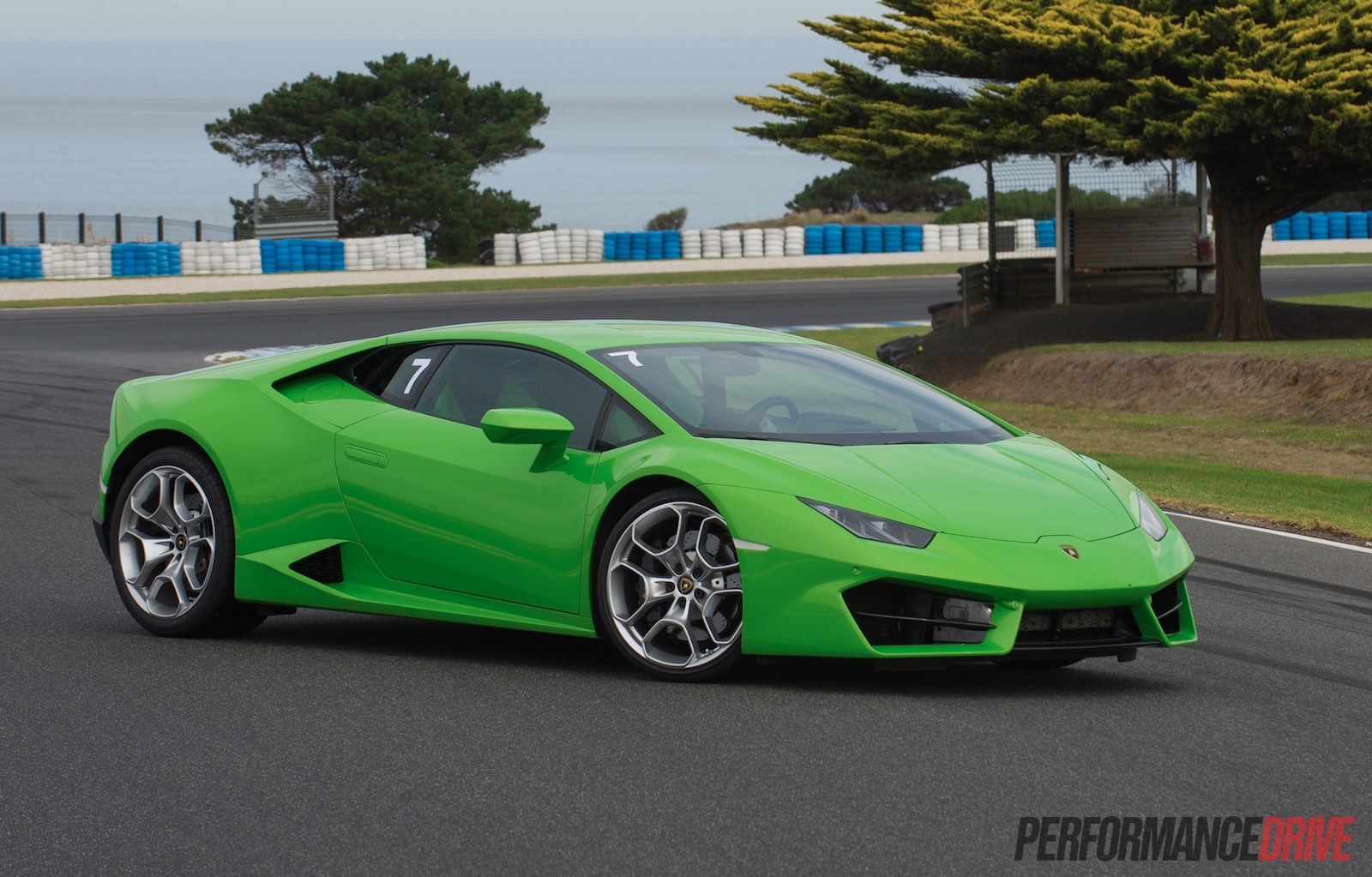 Driving a supercar is more than just using a vehicle to get from A to B. It’s a life experience. And for the latest Lamborghini Huracan LP 580-2, that’s exactly what the legendary company has put together; an experience. 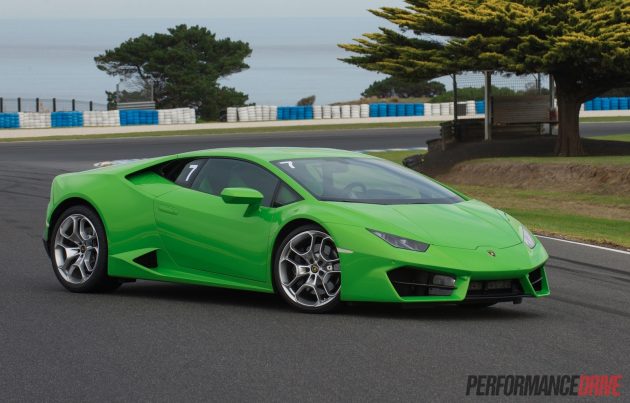 Why has Lamborghini gone for rear-wheel drive? Aside from offering customers the opportunity to do burnouts and drift, of course, the underlying character and personality of the Huracan is completely changed from the LP 610-4 all-wheel drive version. Weight distribution is altered from 42:58, front to rear, to 40:60, meaning there is slightly more weight on the rear wheels and less on the front. This alone brings some noticeable differences in the way the car behaves coming into corners, through the apex, and exiting bends. With rear-wheel drive, it also means you can use the throttle to help steer the car. 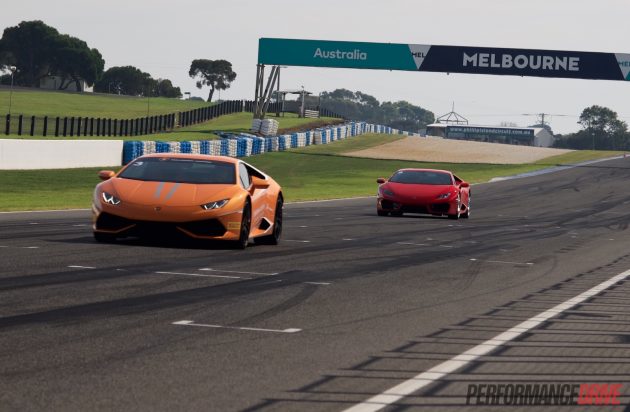 Lamborghini invited Australian media to a special drive program at Phillip Island GP circuit to experience these changes first hand, as part of an event it calls Esperienza. We were under strict supervision and guidance from official Lamborghini instructors, who spend most of their time touring the world teaching customers and potential customers the how-to of driving a modern Lamborghini, but unfortunately we weren’t able to fully explore the Huracan’s capabilities. We were able to sample some of its skills though and of course take in all of its melodic aural capacity.

First up, you need to sit in the Huracan. Getting in requires the supercar-typical folding of your body, to get right down below that low-profile roofline. The Huracan stands just 1165mm tall, which is a bit over half the height of a Toyota LandCruiser. Once you’re in, it’s there you realise you’re not in an everyday car. This is your first taste of that supercar experience.

The low roofline and A-pillars spear toward you but somehow there is enough headroom without feeling claustrophobic, and legroom isn’t going to be an issue for most drivers thanks to a long-range slide-adjustable seat. Lamborghini, owned by Audi (Volkswagen Group), puts together a very luxurious cabin environment too, with leather for the dash and door trims, and a selection of exquisitely-sculpted buttons making up the fascia. Every aspect is presented in a flamboyant way as to match the striking exterior design, and build quality for the controls feels top notch, no doubt thanks to Audi overlooking things. 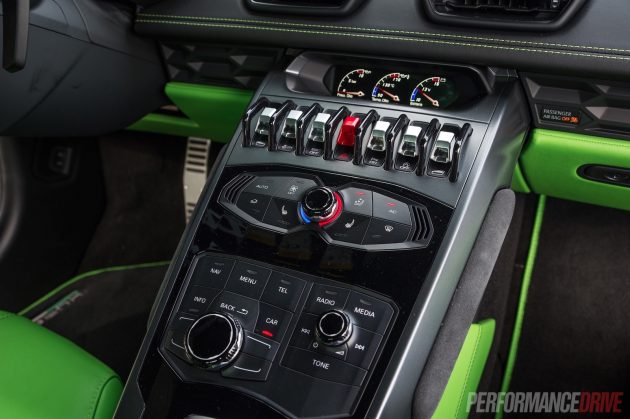 Once you’re ready to fire up the spectacular 5.2-litre V10 engine that sits right behind your ears, you need to activate the starting procedure which is done via a fighter-jet-inspired ignition button. The starter motor whirs and whines in a distinct high-pitch tone, not too dissimilar to the sound of an older F1 car being started up. It bursts into life so abruptly and with so much theatre, you soon find goosebumps rippling down your spine. Give it a tickle and just listen to that V10 bellow and purr. You could sit for quite a few minutes simply playing tunes with the throttle.

Out on the track the Huracan is a seriously quick piece of gear. We couldn’t notice the difference in acceleration compared with the regular 449kW AWD version; it’s still savagely quick working up through the gears. Throttle response is instantaneous, jumping directly to the speed that your right foot demands. It gets up to speed so effortlessly in fact, at times it feels like you’re only doing about 100km/h. That is until you glance at the speedo and notice it displaying 200km/h-plus. This is one of the greatest engines on the market at the moment in our opinion. There is so much character to it. And being bolted right behind you and straight onto the chassis, its power is as close to your body as it can be. This means you not only hear it revving with your commands, you can also feel it working through its vocal range. 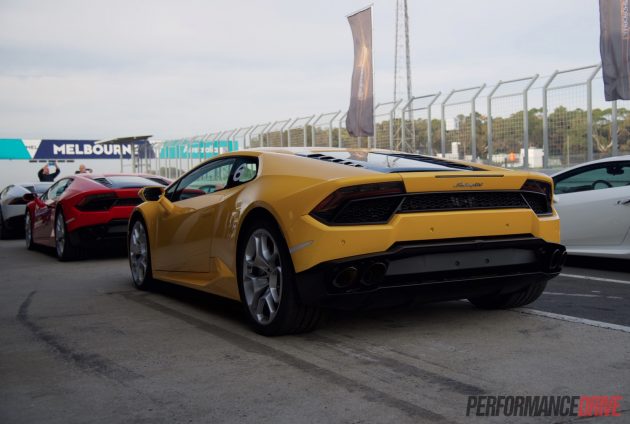 In terms of handling, we weren’t able to fully explore its abilities as mentioned, but on first impressions we can notice the more active and playful driving dynamics. The front end feels more engaging and seems less prone to understeer, resulting in a perhaps less stable drive near the limit compared with the 610-4, but while offering more fun and interaction.

If you’re in the market for an enjoyable supercar, and one that doesn’t just look good but also one that you’d actually like to head out into the mountains to drive, the 580-2 is a highly recommended product. If we had a spare $378,900 in the bank it would definitely be one on our shortlist.

Click play below for our quick driving demonstration video. Due to time and track constraints we weren’t able to put together our usual engine sound and acceleration test video, or do any lap times, but we’re sure you will enjoy the sounds this thing makes as much as we did. It’s also interesting to watch how quickly the speedo rises; it’s almost like Phillip Island, at these speeds, is a complete walk in the park for the Huracan.