With the Paris Motor Show being one of the biggest auto events of the year, it’s no surprise Lamborghini is wanting to get in on the action and will unveil a special concept at the event. 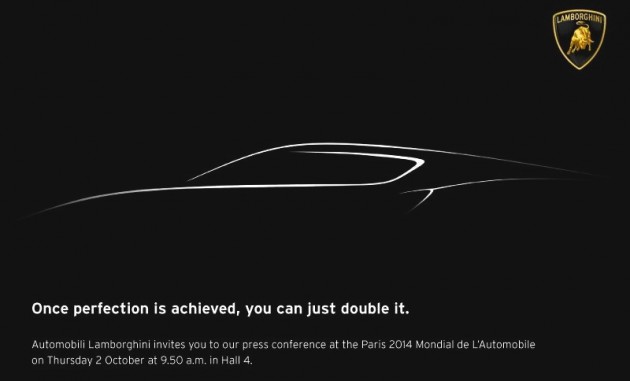 Only this faint teaser image has been revealed so far, with the text “once perfection is achieved, you can just double it”. Whatever that means.

There are a few ideas that are circulating in the industry as to what Lamborghini might be planning. One idea is that it’s another concept SUV. Lamborghini executives are still apparently assessing the possibility of launching an SUV in the next few years.

Almost all manufacturers offer an SUV, with Bentley and even Rolls-Royce set to offer one soon. It makes sense too, because if you look at the monthly and yearly car sales stats you’ll see SUV sales are rising, particularly compact SUVs and high-end SUVs.

Just as a quick blatant example in Australia, Porsche has sold 935 examples of the Cayenne so far this year compared with 753 during the same period last year.

In the teaser image we can see some aggressive rear wheel arches that appear to come with their own intake vents. The roofline sloops down gradually suggesting this could be a shooting brake or wagon of some kind, potentially an SUV.

On the other hand, the company could be planning something different altogether such as a completely bespoke concept, or one based on the Aventador or Huracan.

We’ll have to wait and see. All will be unveiled at the show starting on October 2.