More and more companies are deciding to reveal their special cars and crazy concepts before their official Frankfurt show debuts. The latest comes from Kia; the Kia Niro concept. 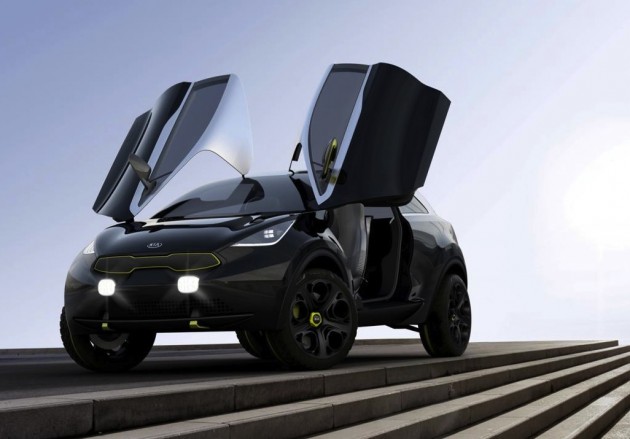 Showcasing an extravagant compact crossover layout, the Kia Niro features upswinging doors, like an exotic supercar, as well as huge alloy wheels, “purposeful” dimensions, and a perched up ground clearance.

It was designed at Kia’s design studio in Frankfurt. Designers envisaged the “substantial yet stylish” body shape to have a distinct multi-tone colour scheme using contrasting materials including stainless steel.

Inside, it’s just as futuristic. There’s a huge LCD screen sitting atop the dash, seats which blend in with the shape of the centre console, and various green highlights to give it a modern spaceship-like character.

Details on the engine are yet to be announced, however, Kia says the Niro comes with an innovative new powertrain designed for urban environments.

It’s understood the Niro previews an upcoming funky compact crossover production car Kia is planning for the future, ready to take on the likes of the Nissan Juke. Kia says,

“The Kia Niro hints at a possible future B-segment contender ready to take on the urban environment with style and tenacity, and will preview an innovative new powertrain when it is revealed on September 10.”

All of the details will be revealed at the Frankfurt show, which starts on September 10. Stay tuned for plenty of coverage.