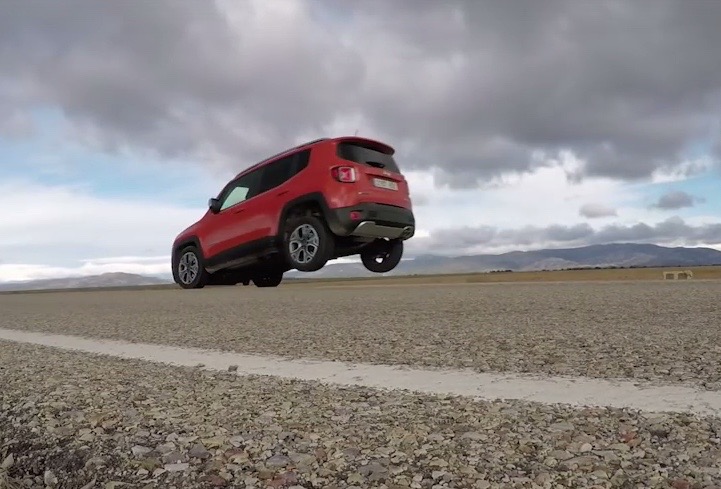 Jeep, a brand already embroiled in plenty of safety recall issues in Australia and around the world, is in the spotlight in Europe after its little Renegade was reported to ‘endo’, lifting its back wheels under hard braking.

With 765 sales for a 1.0-percent share of the small SUV segment year-to-date in Australia, the Jeep Renegade is only a small-time player in its playground, dwarfed by several other competitors.

Nevertheless, its funky and rugged styling with clever retro cues are sure to appeal to some. It’s available with both front- and all-wheel drive configuration, with various four-cylinder engine options.

One area of concern that has propped up appears to be a tendency to pivot on its nose under braking, like a motorcyclist performing a ‘stoppie’. During a test last year in Spain by journalist Pablo Gonzalez, a 1.6 diesel front-wheel drive Renegade was subjected to a 135km/h emergency stop test, resulting in its rear wheels becoming airborne.

“The body leaned forward, nothing strange, it was expected. But he [the car] continued to lean and reached a point where the sky disappeared from my horizon. All I saw was asphalt and asphalt, moving quickly before my eyes. Despite this I kept stepping on the pedal with all my strength. I had the feeling that the rear wheels were in the air, which surprised me to not feel any blow when they returned to their site [the road],” said the Spanish auto-scribe.

Fiat Chrysler’s Spanish technicians found the braking system was faulty for that particular car but over one year on, the same journalist has almost repeated the result in a 2.0-litre diesel-powered version, from the same 100-0km/h distance as PD tests cars.

An Italian website, HDMotori.it, experienced a similar problem in 2015. PerformanceDrive tested the Renegade (FWD) in March and found no issue, so perhaps this is limited to overseas models. Here are all three videos, including ours at the bottom, so you can judge for yourself.