Two new Nissan Altima V8 Supercars have been unveiled today, ready to compete in this year’s season. The two, Jack Daniels and Norton, are Nissan factory-backed teams and will run two cars each this year. 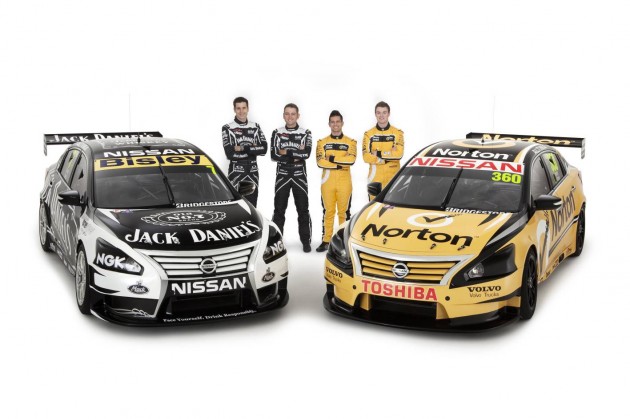 The black and white Jack Daniels cars will be driven by Nissan Motorsport co-owners Todd and Rick Kelly, while the gold Norton cars will be piloted by James Moffat and Michael Caruso. For Moffat and Caruso, it will be their first time being factory drivers.

For Rick Kelly, Nissan Motorsport commercial director, the unveiling has been a proud moment,

“Today is an incredibly exciting day for our team and actually it comes almost 12 months to the day after we first announced our partnership with Nissan.

“Not only do we officially welcome James, Michael and Norton to Nissan Motorsport, but we also unveil our Nissan Altima V8 Supercars in race trim, including the first black and white Nissan Altima of our long-time friends at Jack Daniel’s, as well as marking the next significant step in Nissan Motorsport’s journey to the grid.”

As previously reported, the Nissan V8 Supercars are powered by a new Nismo-developed 5.0-litre V8 engine which uses a twin overhead cam layout, as opposed to the push-rod types from Ford and Holden. It will be very interesting to see how the Nissans shape up against the rest of the field this year.

The first official V8 Supercars event for this year will be the pre-season test day at Sydney Motorsport Park at Easter Creek. After that, the race season will kick off in Adelaide for the Clipsal 500, running from February 28 until March 3.

As for the Altima, Nissan will introduce the road-going version to the Australian market towards the end of this year. William F Peffer Jr, Nissan Australia managing director and CEO, recently said,

“Nissan has a raft of new models soon to be released in Australia, including the all-new Altima sedan.

“The 2013 V8 Supercar Championship is an important part of the Nissan Altima’s marketing strategy. Australian new car buyers will have an entire year to get to know the Altima name and shape before it goes on sale later this year.”