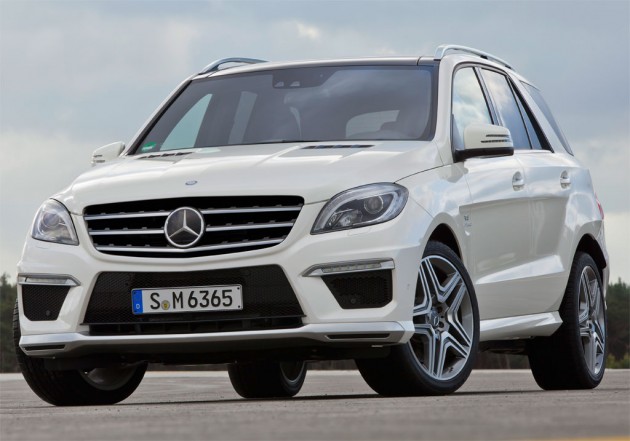 Of course, the main upshot to the new engine is increased performance. The 2012 Mercedes-Benz ML 63 AMG will do the 0-100km/h dash in just 4.7 seconds, improved from 5.0 seconds. It’s a truly cracking time for very large SUV. The brutal ML 63 also has a top speed limited to 250km/h, however, when equipped with AMG’s now famous ‘Performance Package’ option, which boosts power to a whopping 410kW and 758Nm, top speed is 280km/h.

Inside and out, the new 2012 Mercedes-Benz ML 63 AMG comes with all the usual AMG performance appointments, such as 20-inch or 21-inch alloy wheels, Active Body Control with AN AIRMATIC Air Suspension and Adaptive Damping System (ADS), including ACTIVE CURVE SYSTEM suspension which minimises bodyroll and enhances handling. The serious SUV also gets a decent smattering of AMG badges including blue-illuminated sills and various logo trimmings.

Other features include a seven-speed AMG SPEEDSHIFT PLUS transmission, LED lighting, an AMG bodykit with front and rear spoilers, quad tailpipes and a rear diffuser, as well as all the luxury features you’d expect in a top of the line Mercedes-Benz.

The 2012 Mercedes-Benz ML 63 AMG will go on sale in Australia later in 2012. Stay tuned for official pricing.

Check below for further equipment details: