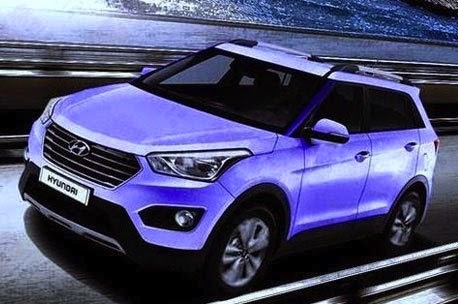 An image, believed to be official, of the all-new Hyundai ix25 compact SUV has surfaced online, giving us a preview of what the new model will look like before its expected debut in Beijing next week.

The new model is reportedly based on the i20 hatch, offering similar interior proportions, with a jumped up body and increased ground clearance. It will sit beneath the current ix35 in the company’s lineup. It’s unknown if it will come in all-wheel drive form.

With the compact SUV market segment becoming increasingly popular, it was only a matter of time before Hyundai jumped on board and offered something for the market.

The ix25 will apparently go on sale in the Chinese market initially, but could become a global product depending on its success.

As you can see, the ix25 will take on a similar design theme as the larger ix35. At the front is a form of the company’s prominent hexagonal grille layout, elongated headlights, blacked-out A-pillars, and a rugged undertray.

Under the bonnet, power is expected to come from a range of four-cylinder engines, including a 1.2-litre unit and 1.4-litre, as well as a 1.4 turbo-diesel.

More details will be revealed at the 2014 Beijing Motor Show starting on April 20.