A few records have been broken in the world of fast cars recently. The latest is this twin-turbo Hennessey Performance Ford GT, which has just broken the standing mile (1.6km) top speed record, achieving 414km/h (257.7mph). 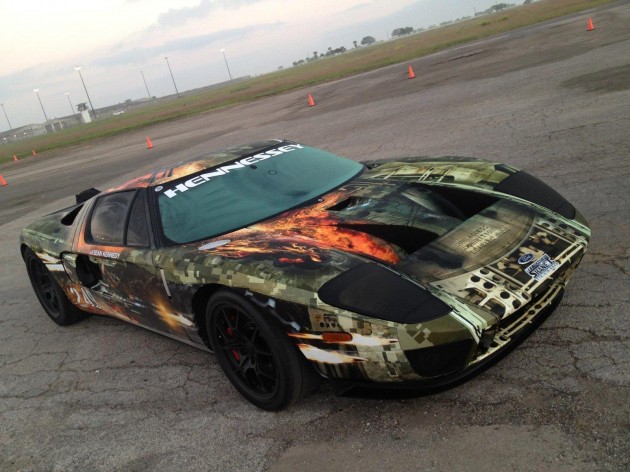 Running at the Texas Mile high speed event at the Chase Field Industrial Complex last weekend, the Hennessey Performance Ford GT was 7.4km/h fastest than the second-fastest car on the day. The team hit 250.1mph (403km/h) on the Saturday, but waited to see how the weather panned out on the Sunday for a full attempt.

With more favourable conditions, Sean Kennedy drove the iconic machine – owned by Mark Heidaker – out to 414km/h in just 1.6km of strip. Kennedy said, “I was impressed with how hard it pulled in fourth and fifth gears on that run. I think I can do better in the lower gears next time and we can run an even better speed.”

Powered by a 5.4-litre Accufab Racing twin-turbo V8 engine, the unit uses Precision Turbochargers turbos running at 36psi, and runs on 117-octane racing fuel. It’s all controlled by a MoTeC engine management system. Overall power output is said to be around the 1400hp mark (1044kW).

The team hopes to break the 260mph mark (418.6km/h) record at the Texas Mile event again in October.

Click play on the video below for a look at the record run.