Ford Performance Racing (FPR) has revealed its new prototype V8 Supercar ‘Car of the Future’ (COFT) wearing the new global EcoBoost motorsport colour scheme. The livery is used all around the world. 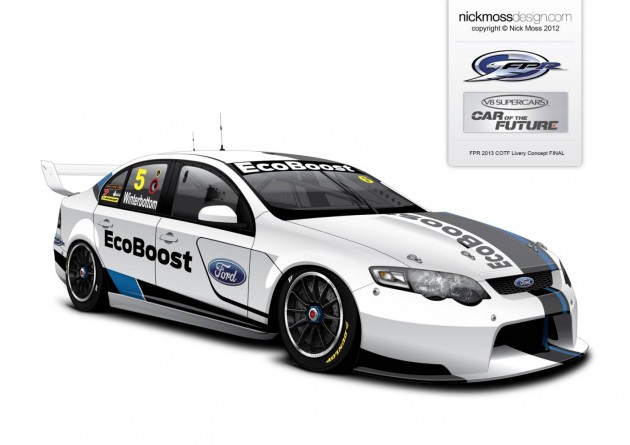 From the Ford Fusion EcoBoost NASCAR to the 2012 EcoBoost Formula Ford open-wheeler, Ford is really looking to push the EcoBoost brand image.

“EcoBoost is the future of Ford’s engine technology globally so it makes sense that we use Car of the Future (COTF), the future of V8 Supercars, as our platform to promote it.

“Ford Performance Racing’s first Falcon COTF will carry the same EcoBoost livery that all of Ford Racing’s official teams around the globe have run throughout the month of August.

“This further aligns our V8 Supercar program with Ford’s global motorsport plan and places it alongside the likes of NASCAR and the World Rally Championship.”

Underneath, you won’t find a direct-injected turbocharged engine, but the FPR EcoBoost V8 Supercar COTF prototype does use the new chassis and independent-rear suspension setup.

The new layout, which will be used across the complete grid from next year, is also lighter weight (dropping 100kg), uses bigger wheels, and incorporates a new fuel cell position in front of the rear axle instead of behind. 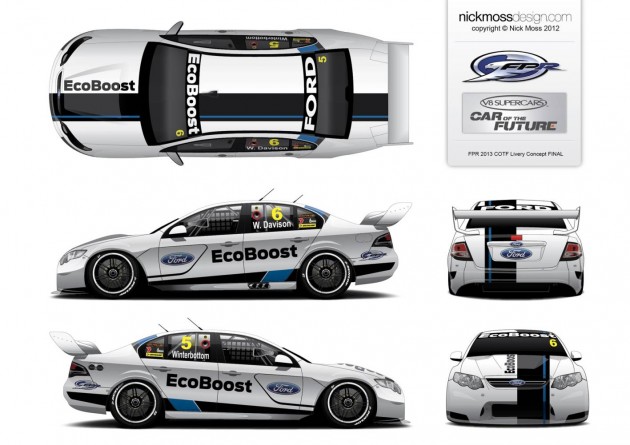 The prototype will wear the EcoBoost colour scheme during its testing stage, before FPR will reveal its new racing colours early next year. FPR Team Principal Tim Edwards recently said,

“The impending debut of our first COTF Falcon coincides with an important time for Ford globally as the company rolls out more and more models featuring EcoBoost technology.

“By running our test program in Ford’s EcoBoost motorsport colours we are not only showcasing our team and category to the world, but also showing we are an important part of Ford’s racing program.

“It is also appropriate that we are running it on our Falcon at the same time road-going Falcons with EcoBoost engines are being produced just across the road from our workshop.”