Ever wondered what the quickest production hybrid vehicle is? Wonder no more, the Infiniti M35h sports sedan has just been crowned the quickest on the quarter mile by the Guinness World Records with a time of 13.896. 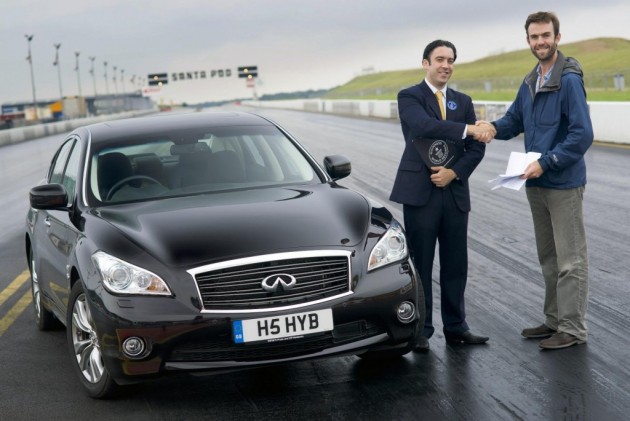 It’s not a bad time, and not just for a hybrid. To give you an idea, the latest Subaru Impreza WRX manages the quarter mile in around the same time, Wheels magazine even ran a WRX STI (non-spec R model) in 14.1 seconds.

It’s no surprise though really. The Infiniti M35h comes equipped with a 3.5-litre V6 petrol engine outputting 225kW of power and 350Nm of torque. The V6 is backed up by a hybrid electric motor system which provides an extra 50kW of power from a 1.3kWh lithium-ion battery pack.

With a total of 275kW, the Infiniti M35h also set a 0-100km/h time of just 5.5 seconds while at the UK’s Santa Pod Raceway. This makes it the quickest accelerating hybrid vehicle currently on sale, overseas.