A super-rare and extremely fast Porsche 911 GT1 Strassenversion (street version) is up for sale on duPont Registry in Germany. It is just one of 20 in the world. 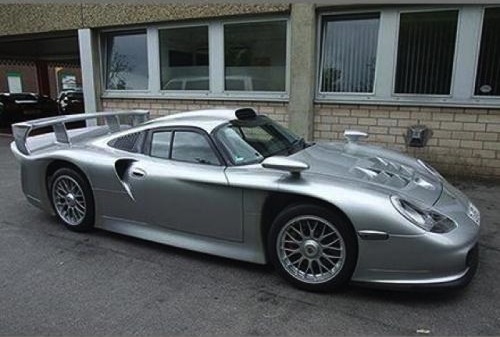 The Porsche 911 GT1 was a Le Mans race car. Porsche decided to go a bit mental in the late Nineties and created a street version, known as the Strassenversion. It features a very low-sweeping body profile, with vast aerodynamic elements to help it cut through the air at high speed.

In the back sits a 3.2-litre twin-turbo flat-six engine producing a colossal 400kW of power. Even by today’s standards that level of power is extremely high. In a car weighing just 1149kg, you can begin to imagine what sort of acceleration and speed this thing is capable of.

The 0-100km/h dash can be dealt with in just 3.9 seconds, using its rear-wheel drive drivetrain and a six-speed manual transmission. Top speed is rated at just over 300km/h.

For the street version the ride height is raised slightly compared with the track-only versions that went on sale. There’s also carpet in the cabin for more comfort and reduced noise, steel brake rotors instead of the carbon ceramic type, while the seats are more comfortable sports items rather than a single racing bucket.

This example is actually number 20, so it’s the last GT1 Strassenversion ever made. As you would expect, the example is attached to a very impressive price tag. If it’s any consolation, it has only covered 4900km, but anyway, it’s available through duPont Registry for approximately AU$2,217,671.82.