The 2015 Volkswagen Touareg facelift has been revealed, with the V6 TDI variant getting a slight rise in power and all models benefiting from improved economy. 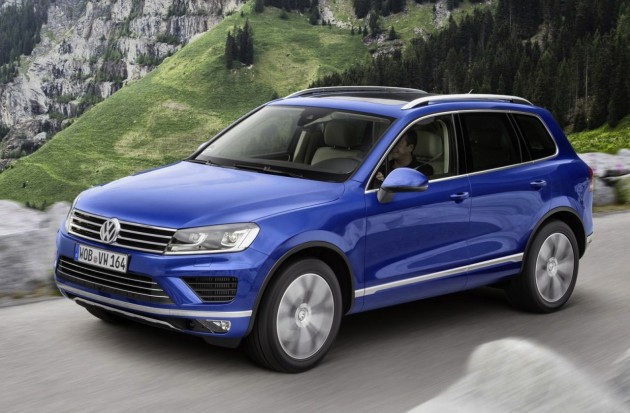 Showcasing mild styling tweaks, the 2015 Touareg can be distinguished via updated bi-xenon headlights for all variants and new taillights. There’s also trimming updates for the chrome package and some new exterior colours in the mix such as Reef Blue Metallic, Sand Gold Metallic, Black Oak Brown, and Moonlight Blue.

Under the bonnet of the V6 TDI version, the 3.0-litre turbo-diesel engine gets a new catalytic converter which helps the big SUV pass Euro 6 emissions standards. It also helps increase power from 180kW to 193kW.

Despite the added power, fuel economy is improved from the average rating of 7.2L/100km to an impressive 6.6L/100km. The base model 150kW variant using a similar engine also gets improved efficiency, dropping from 7.0L/100km to 6.6L/100km as well.

For a large premium SUV that isn’t a hybrid, these are some great figures. For comparison, most small hatchbacks offer official average consumption figures not far off 6.6L/100km.

Part of this improvement is thanks to a revised eight-speed automatic transmission which now features a coasting function. Essentially the technology disengages the transmission to utilise kinetic energy during coasting with no throttle input.

Volkswagen has also made updates to the suspension and says the handling has been optimised for better agility. The air suspension option continues, providing an adjustable ground clearance of up to 300mm. The system automatically lowers the vehicle at speed above 140km/h.

Inside, the infotainment system gets new online services, with Google Earth maps and Google Street View functions. There’s also some new colour options and materials, with new-look aluminium switches and white illumination instead of the outgoing red. 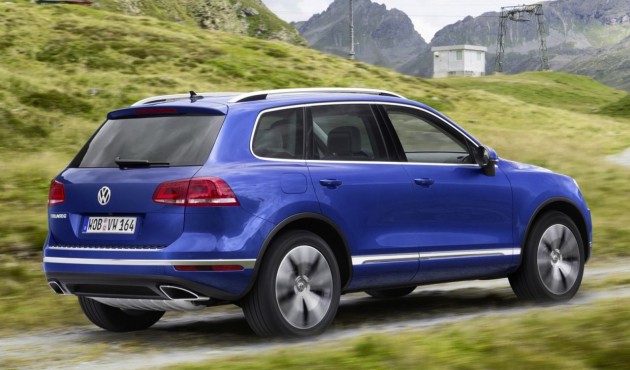 Volkswagen Australia is yet to announce local details, however, it goes on sale internationally in October so we expect an announcement soon.

So far this year Volkswagen Australia has sold 1325 examples of the Touareg, giving it a 9.6 per cent share in the ‘SUV Large above $70,000’ segment (according to August VFACTS). It outsells both of its brothers that share the same chassis and compete in the same segment; the Audi Q7 (1005) and the Porsche Cayenne (935).