As previously reported, Audi is set to reveal the new 2013 Audi RS 4 Avant at the upcoming 2012 Geneva Motor Show next month. Here’s a rendering of what to expect. 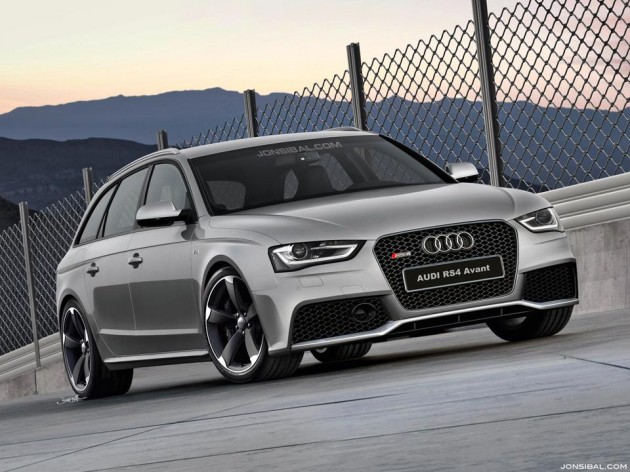 Although no further details or confirmation has been made, this rather appealing artist’s rendering has surfaced on the web, outlining what the new RS 4 Avant could look like.

Renowned auto artist Jon Sibal has conjured up the preview of the new high performance model. Like the B5 twin-turbo iteration of the performance A4, the new version is set to come in wagon form only.

Not wanting to compete with itself, it is believed Audi won’t be producing a sedan as an upcoming Audi RS 5 Sportback will fill that market. Audi has also expressed that wagons are often the better selling variant.

Is anyone going to argue? Not likely. As this rendering proves, wagons are just cool, especially performance wagons. Sibal has added the awesome 20-inch alloy wheels to it too, borrowed from the Audi Quattro concept.

The 2013 Audi RS 4 Avant is expected to come with a 4.2-litre naturally aspirated V8 engine producing 331kW of power and 430Nm of torque; the same unit as seen in the current Audi RS 5 coupe. Acceleration from 0-100km/h is expected to take under 4.9 seconds.