The Fiat 500 may not be the manliest of cars upon initial thought, but this 224kW (300hp) Fiat 500 Abarth Cinquone Stradale with a very aggressive and chunky widebody bodykit may change that notion. 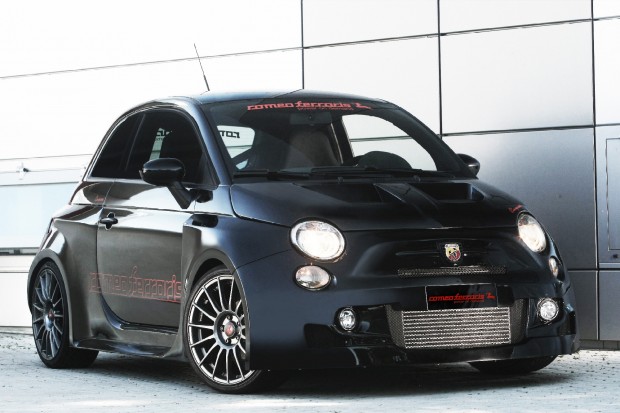 The Fiat 500, especially the Fiat 500 Abarth (Esseesse in Australia), has been a hot favourite amongst the petrolhead world since its debut, with many car experts and critics around the world praising its go-fast attitude and ability – even Michael Schumacher has one as a daily driver.

This Fiat 500 Abarth Cinquone Stradale on the other hand though, just takes that punchy yet cute theme and blows it out of the weeds. It’s the Arnold Schwarzenegger compared to the Rocky Balboa Abarth.

Apart from the obvious bodywork, the Abarth Cinquone Stradale features an extremely pungent 1.4-litre turbocharged engine that is boosted to develop 224kW (300hp).

Inside, the Fiat 500 Abarth Cinquone Stradale comes with a race-ready roll cage, Alcantara and leather trim, carbon fibre highlights and a pair of hip-hugging bucket seats.