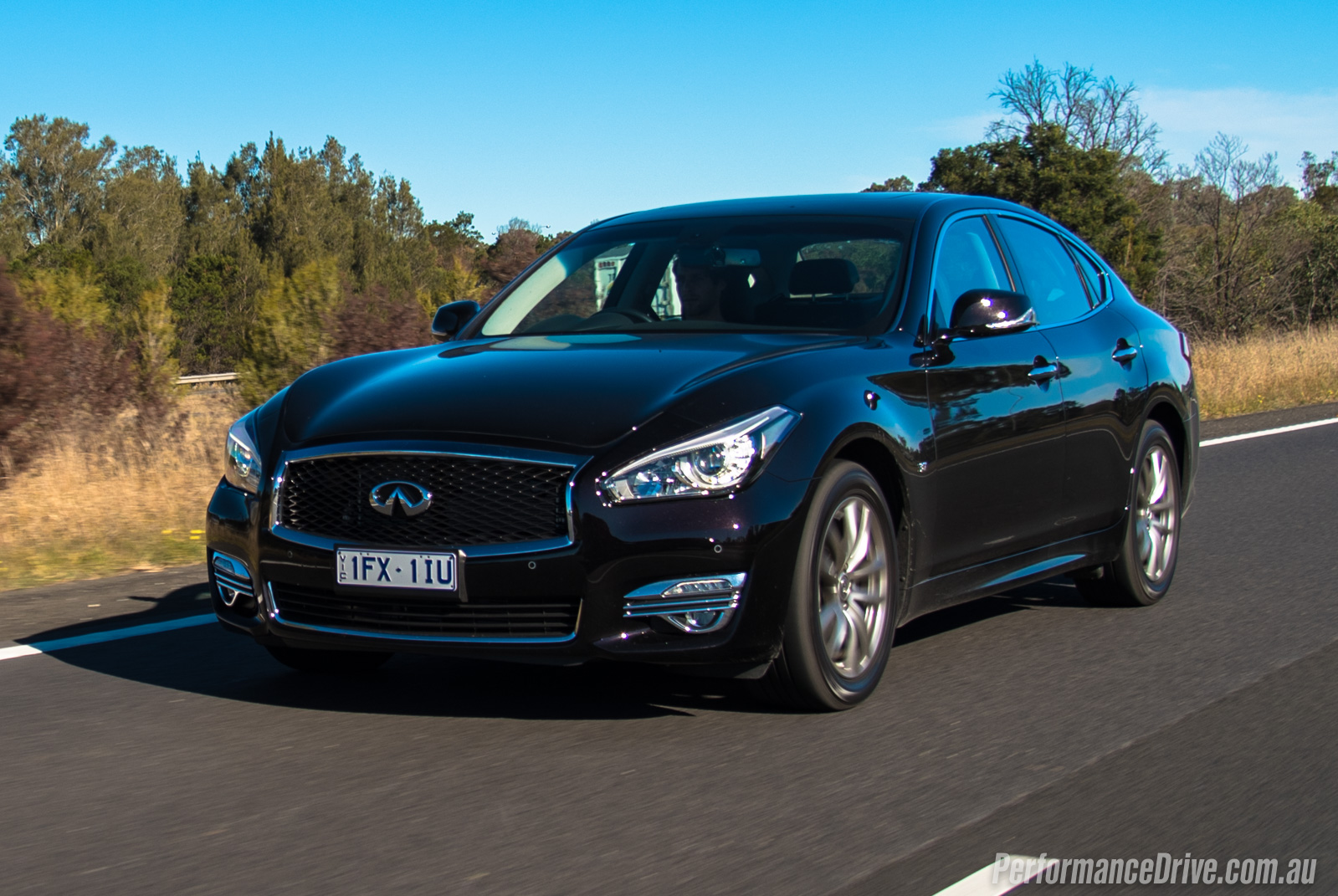 The business world is one that is notorious for being cut-throat, filled with individuals that are mercilessly unforgiving. Those same individuals have settled into a fairly familiar group of automobiles for the daily commute, tending not to stray too far from the usual German suspects from Audi, BMW, and Mercedes. 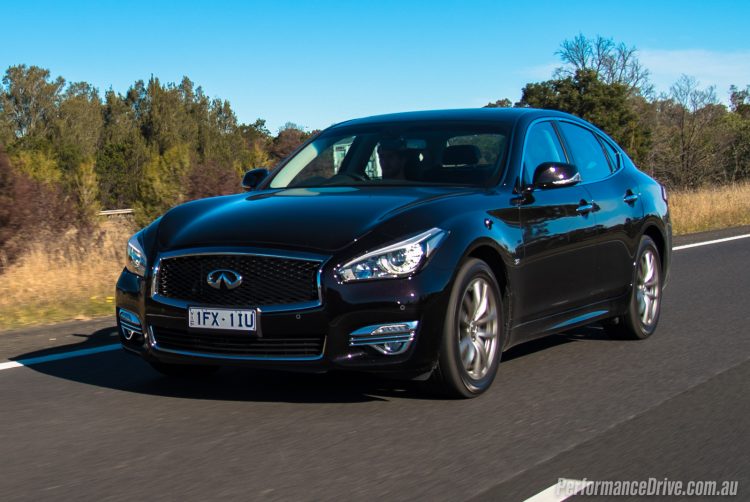 But that may well be changing, with the past few years throwing up interesting new offerings that aren’t from Germany, like the Hyundai Genesis, Lexus GS, and Jaguar XF. Now then, the underdog of the group, the Infiniti Q70 wants a bigger piece of the pie, having struggled to make strides here in Australia. According to VFACTS figures compiled by the FCAI, Infiniti managed to move just 22 units in 2015, and has so-far posted 26 sales this year.

Why the lacklustre sales? We thought we’d have a go in the base model GT Q70 to find out. It will set you back $68,900 (plus on-roads), powered by a V6 petrol engine mated to a seven-speed automatic transmission with rear-wheel drive. Stepping up to the Q70 S Premium, featuring the same 3.7 V6, demands $78,900. It adds 20-inch wheels, sports suspension and unique brakes, a 16-speaker Bose sound system, and adaptive cruise control and collision intervention tech. The flagship Q70 GT Premium is priced from $82,900 and features a clever 3.5 V6 hybrid engine for added torque and increased efficiency.

As you might be able to tell, all of these prices are well below the equivalent German rivals, making the value factor one of the Q70’s main attractions. 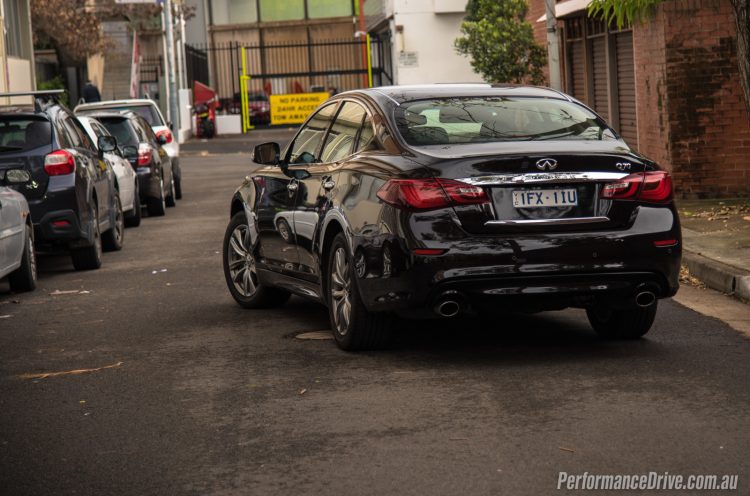 Let’s start with the exterior. The Q70’s styling is admirably bold at one end and disappointingly bland at the other. The front end delivers on the road-presence that you would expect from an executive sedan, with a defined and sophisticated front fascia and massive chrome grille, with bespectacled LED headlamps. The design lines, integrated fog lamps and undulating curves on the bonnet add to this muscular design aesthetic.

We just wish the same treatment was applied to the rear. At the back you’ll find a rather featureless posterior that leaves us looking at cars like even the Hyundai Genesis for some design inspiration.

Stepping inside the cabin, things are remarkably different to the conservative Germans. You’re welcomed by a spacious interior with curvy furniture, and a big slab of white ash-wood around the central console. The wood flows through the passenger dashboard, around the door sills, finishing at the rear of the cabin. A luxurious centre-mounted clock adds to that executive feel that the Germans have so long capitalised on.

Parts of the centre console appear a little crowded, and buttons for the AC and multimedia system are seemingly scattered with no real logical arrangement. It’s a small detail but addressing things like this could improve the overall comfort and ergonomics. Speaking of comfort, the big leather-wrapped seats have four settings for both heating and ventilation, and there’s also a heated steering wheel. 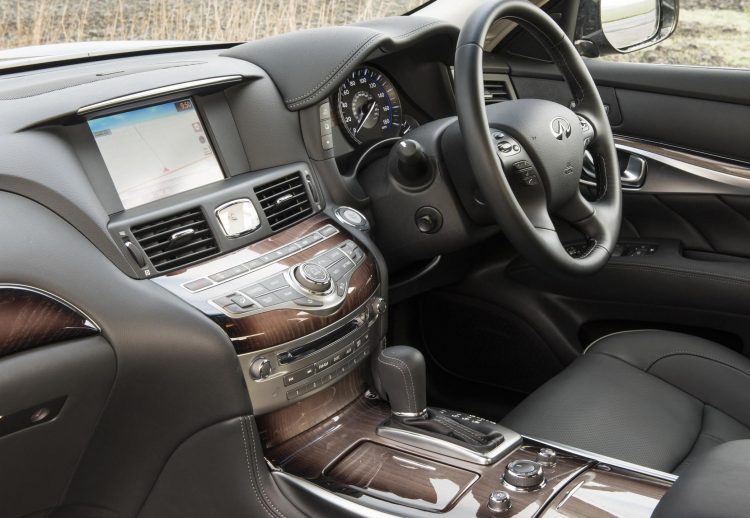 You’re going to hear us mention this point again before the end of the review, but arguably the Q70’s strongest selling point over its rivals is the amount of kit you get for your $68,900.

Roll out of the factory in a stock Q70 and you’ll receive cruise control, dual-zone climate control, a sunroof, dual stainless steel exhausts, keyless entry, heated and ventilated seats, automatic wipers and lights, a reversing camera with forward and rear sensors, leather upholstery, bi-xenon headlights, tinted windows, and an 8.0-inch infotainment system with navigation and a DVD player. The Q70 shines ahead of its competitors thanks to the lack of pricey options, with the only available tick-box for this car being metallic paint. This is a refreshing change from the German rivals that are notorious for their expensive and extensive add-on lists.

Infiniti’s powerful 10-speaker Bose sound system sets new standards for a standard setup. This unit is connected to what we can most kindly describe as a dated interface. There’s no Bluetooth streaming for Apple or Android users, only Windows phones (really?), and the overall appearance and functionality lacks in comparison to even the much more attractive MMI installed on the cheaper Infiniti Q50.

In terms of practicality, the Q70 petrol fares better than the hybrid brother, because there’s no obtrusive battery pack, meaning boot space increases from 350L to a more spacious 500L. There’s more than adequate headroom, and you’ll never hear complaints from the rear of the cabin in terms of legroom. The Q70 is a bit of a limousine in this respect.

On the ownership front, Infiniti offers a four-year/100,000km warranty with four years roadside assist. Services are 12 months or 10,000km, averaging around $512, with the Infiniti Assurance program lasting eight years of ownership. 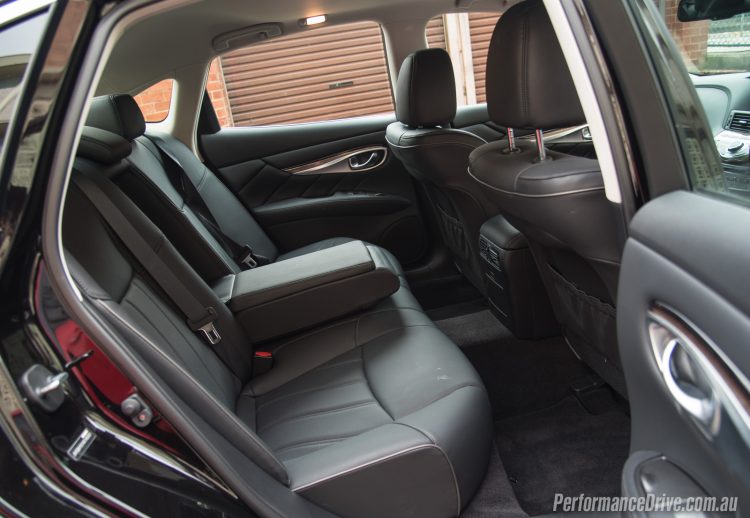 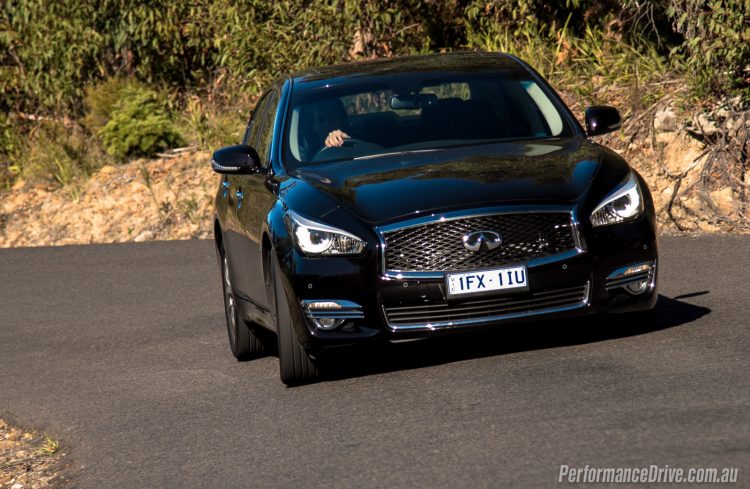 The Infiniti marketing team would have you believe the Q70 is a luxurious executive sedan with genuine sporting pedigree. We’ll counter that claim. Rather quickly, too.

The Q70 weighs just under 1700kg but it manages to feel even heavier at speed and around corners. The front axle has sufficient bite for initial turn-in, but once the weight begins to shift around, the ride is somewhat spoilt by boat-like swaying tendencies when pushed. Obviously, as a former F1 team, Infiniti knows there are ways of sorting this out, but as you’ll discover, it would undoubtedly counter the Q70’s forte; the ride.

In previous years the Q70 was criticised for its overly firm ride. Now though, Infiniti engineers have been working away at making sure it offers an American-quality ride, which it does. It glides over irregularities without a problem, ironing out bumps with barely a vibration transmitted through the cabin. It’s a lovely ride, and one of the main reasons we think you should be looking in this direction.

Infiniti has given the Q70 four driving modes. Snow – almost completely irrelevant here in Australia – Eco, Normal which offers small morsels of power and a lighter steering feel, and Sport, which livens up throttle response and thickens up the steering feel. Even when left in Normal or Eco mode, there is more than enough power from the V6, with absolutely effortless acceleration.

Stick the driving mode in Sport however and you’ll want to open the windows to get as much of that sweet V6 note into the cabin as possible. Infiniti has sound-proofed the Q70’s cabin so well from the outside world that you’ll wish you were standing on the footpath so you can listen to it drive past. There’s active ride noise cancellation technology, which combined with the comfort-oriented suspension calibration, really drowns out the outside world and creates your very own little microcosm of comfort. It is a very smooth and quiet drive. 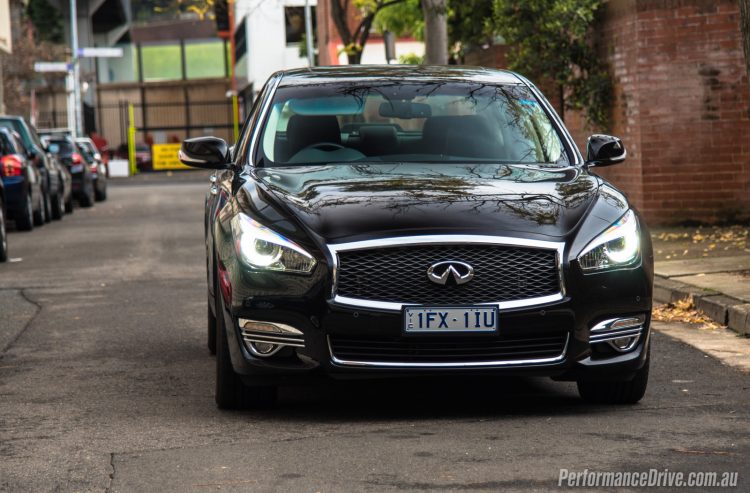 At 4945mm, the Q70 is 100mm longer than a Range Rover Sport and one of the longest vehicles in the segment (just – only the Jaguar XF is longer), which becomes all too obvious in tight spaces. The nose can scrape on some speedbumps too, so you do need to be cautious when threading through inner-city streets and when navigating around roundabouts.

If economy is something you’re looking for in your next car, you’ll need to opt for the hybrid variant. It averages 6.5L/100km. If you go for this V6 be prepared to never see economy in single figures. Even with the gentlest of right feet, we weren’t able to better the claimed 10.2L/100km average, returning figures of 12.5L/100km in the real world.

As much as the marketing people want you to believe the Q70 is a sports sedan, it’s not. Granted, the 235kW push is enough to hit illegal speeds rather rapidly, but the overall nature of the Q70 comes through as more of a comfortable cruiser than a luxury sports sedan. Infiniti would have to ruin one of our favourite aspects of this car, the sublime suspension, in order to change this.

So, why the lacklustre sales? There is weight to the argument that just like a Rolex purchased from Indonesia, while it might look identical; it’s not a Rolex. And for the business execs that are in this portion of the market, that might be enough to turn them off.

CONS:
– Fuel consumption
– Too soft for any sportiness
– Dated dash and interface, no Bluetooth streaming