It seems every week an all-new company sets out to produce a fully electric sports car. This time we hear of such from a Spanish company called Applus+Idiada. It’s planning to unveil the ‘Volar-E’ at the upcoming Geneva show. 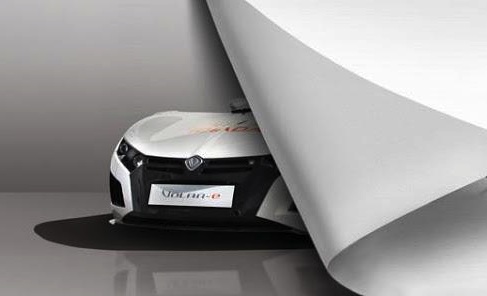 In terms of its design only this teaser image has been revealed, which includes a sneak peek at a sleek and low profile sports-car-like front end.

The entire body is made from carbon fibre to keep weight down, while power comes partly thanks to Rimac, the Croatian company that made the awesomely powerful Rimac One concept last year.

Like the Rimac, the Volar-E is set to be a powerful electric beast. Output will come from a 38kWh battery system feeding current into four hub-mounted electric motors. A combined rating of 596kW and 1500Nm has been given.

Although specific acceleration figures and performance hasn’t been mentioned, the Volar-E could potentially cover 0-100km/h in under 3.0 seconds.

All will be revealed next week at the 2013 Geneva Motor Show, starting March 5. Stay tuned for plenty of coverage.