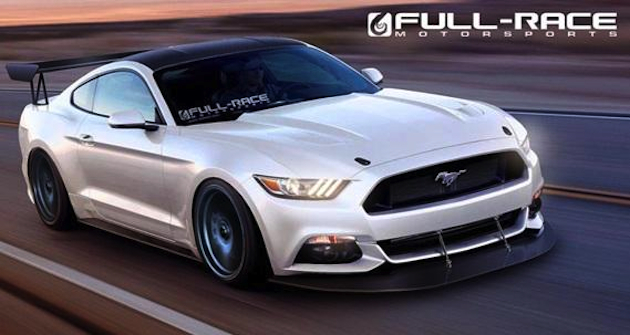 The SEMA Show is set to be a cracker this year with various tuners ready to show off performance kits for the new sixth-generation Mustang. One more Mustang has just been announced, and will sit on the official Ford stand at the Las Vegas event.

The Full-Race Motorsports Mustang has been designed to compete in Sports Car Club of America events, as well as time attack challenges. The exterior shows off a new carbon fibre rear spoiler and front splitter. Other useful items include an uprated limited-slip diff and Brembo Brakes.

“We’re building this as a real race car. After SEMA, it will compete at SCCA events and eventually time attack events. This will be a plated, fully functional, street-driven track car that’s very competitive.”

Based on the 2.3-litre turbo four-cylinder EcoBoost model, the car features what Full-Race Motorsports calls the ‘FreakoBoost’ performance kit, adding a new intake, turbo downpipe, exhaust manifold, intercooler, cat-back exhaust system, as well as a larger twin-scroll BorgWarner turbo. As a result output is boosted to 373kW and 609Nm, up from 231kW and 433Nm.

The new Ford Mustang will officially go on sale in Australia for the first ever time in 2015.