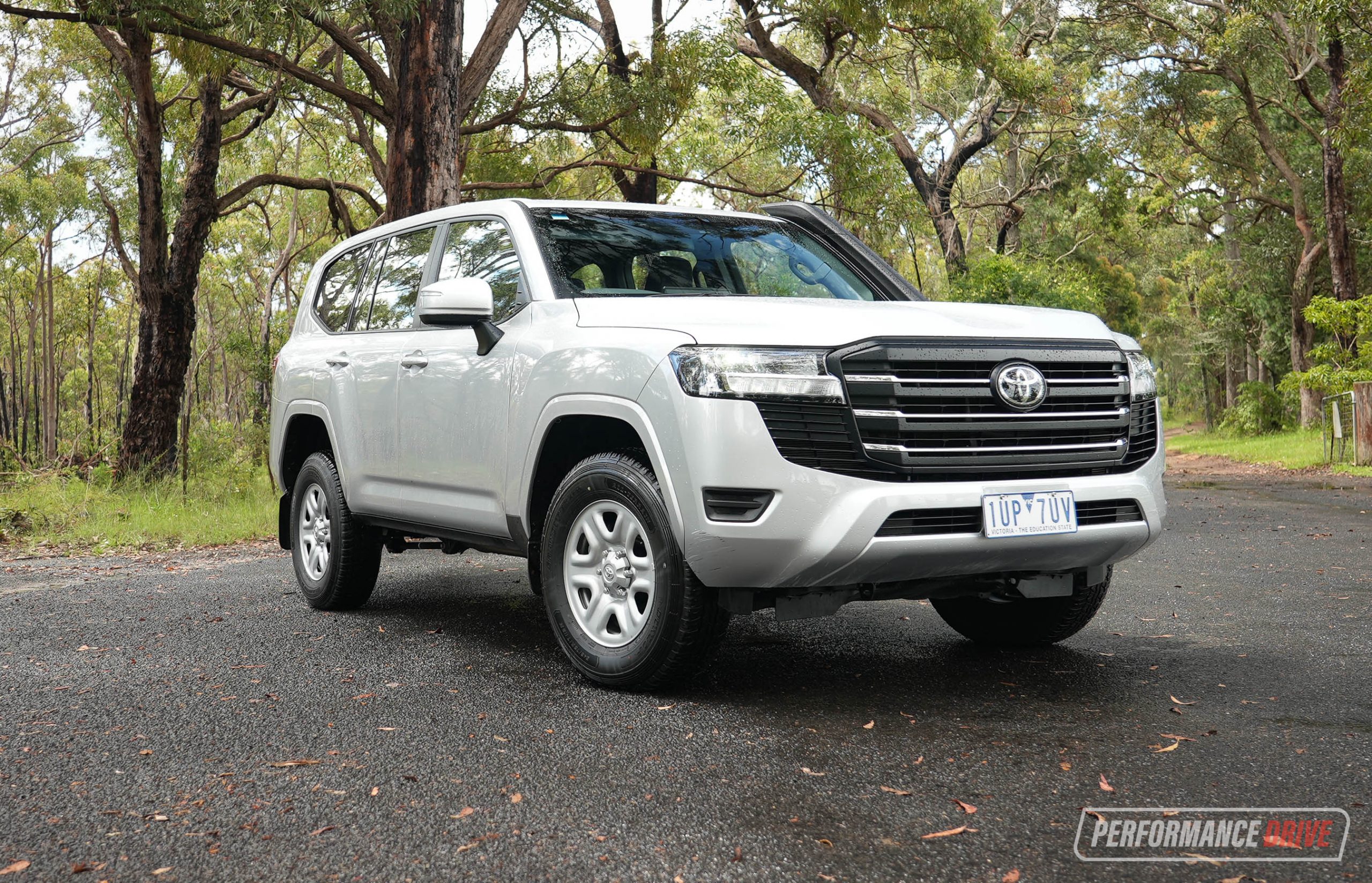 After much anticipation and secrecy for fans and sceptics, the 2022 Toyota LandCruiser 300 Series is finally here. December 2021 saw the port gates open and the first batches to start arriving in Australia. 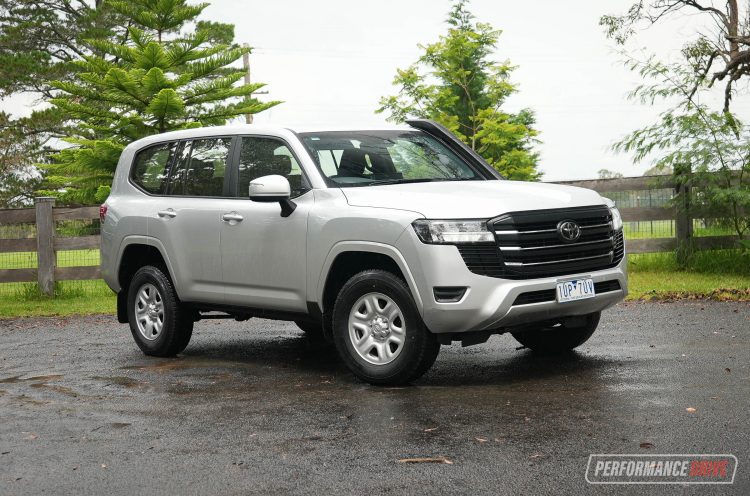 Like with many Toyota models recently, the LandCruiser has undergone major changes and has been redesigned from the ground, up. It’s a tricky business for Toyota, as the LandCruiser has a cult following that is probably the most sensitive to change. A long history shows it has been one of the most solid and capable 4x4s you can buy. But modern times call for modern tech and law-enforced fuel efficiencies.

Key changes include a new 3.3-litre twin-turbo V6 diesel engine and 10-speed auto transmission, a new platform and exterior using the Toyota New Global Architecture (TNGA-F), and many safety tech additions. There are also two new variants joining the existing four; the GR Sport and Sahara ZX. They sit above the GX, GXL, VX and Sahara.

Here, we’re testing the base model GX. It targets buyers and companies that need brute without the bells and whistles. Though, it now inevitably has some bells. Prices start from $89,990 for the GX, and rise to $138,790 for the top-spec Sahara ZX (excluding on-road costs). 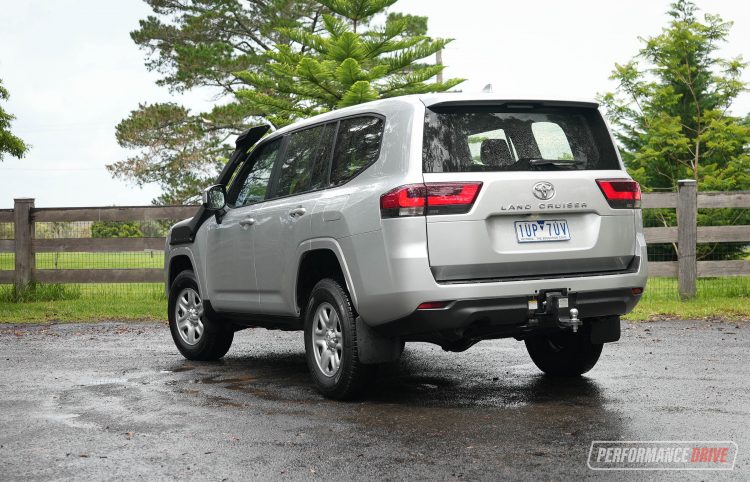 Even though all variants get the same new 3.3 diesel powertrain in Australia, the spanning price range of the variants is equivalent to the cost of a new Toyota Kluger. So, expect to see the GX as a very different vehicle to the Sahara ZX. The 200 Series GX was raw, stripped back, and ready to get dirty. The 300 Series GX follows this recipe with its vinyl floor, hard-wearing cloth trim, no third row of seats, an air intake snorkel, 17-inch steel wheels, and mudflaps.

But now that we have some of the toughest safety ratings in the world, it gets some added tech. You now get forward collision mitigation with pedestrian avoidance and braking, distance-controlled cruise control (including low-speed off-road cruise), auto headlights with auto-dipping high beam, LED headlamps and taillamps, lane departure warning, road sign recognition, an electric park brake, height adjustable front seats, and proximity keyless entry with a start button. 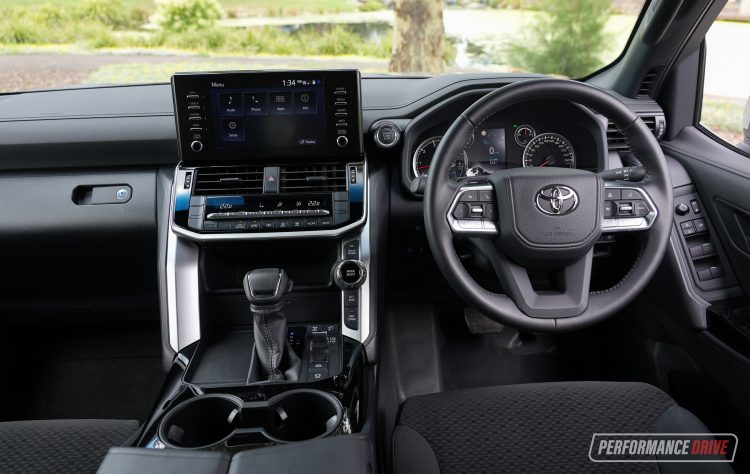 You also score a 9.0-inch touch-screen (down from 12.3in in upper variants – but better than none as with the 200 Series GX), a six-speaker stereo with Bluetooth, digital radio, Android Auto and Apple CarPlay, and dual-zone climate control.

For drivers that don’t want some of the above driving aids, don’t worry, most of them can be switched off. But we found they were intuitive and less intrusive than most, and worth giving a try before reaching for those off buttons.

We spoke about the new-look exterior in our Sahara ZX review here, but for the GX specifically, Toyota has done an excellent job in making it look strong and familiar, but in a modernised way. The GX accidentally looks more off-road ready and less chunky with its lack of side steps, lack of alloy wheels, that snorkel and a large black front grille. 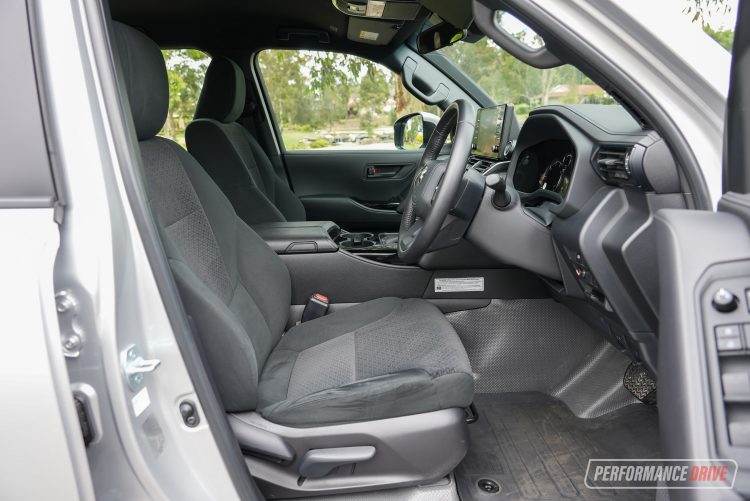 On the inside, it’s not as primitive as the 200 Series GX. The interior certainly looks more modern, but not too much to lose its hard-wearing strength. Plastics feel solid and secure, and controls and buttons feel durable too. The interior is still very easy to navigate as the layout and button placement does not overwhelm. As for space and storage areas, it feels virtually limitless.

The seats provide acceptable levels of comfort and minimal bolstering so larger frames don’t feel hemmed in. If you like to be seated higher than the cars around you, the GX absolutely offers this. But you don’t feel particularly high within the cabin itself. The aluminium bonnet has two bulging contours that impede on your view ahead, which could be slightly irritating for shorter drivers. 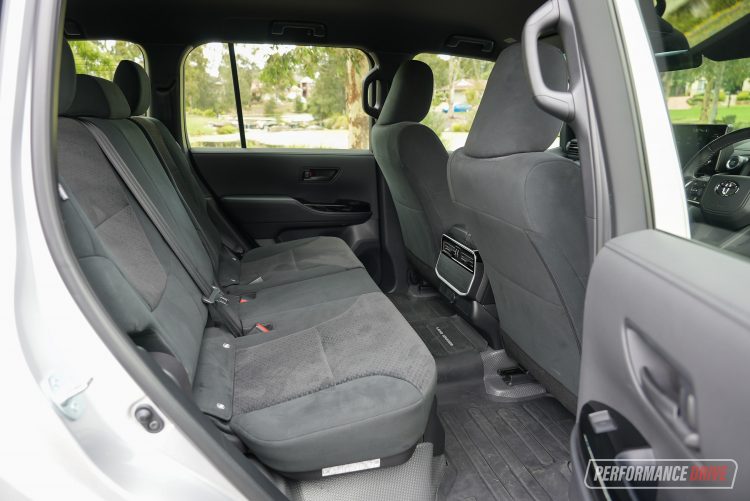 Because the GX does not come with a third row of seats it is the variant with the largest boot space of up to 2052 litres (like the Sahara ZX, also five-seat only). It is huge and perfect for long getaways off the grid.

Servicing intervals are required more often than the average, at 10,000km or every six months. Toyota offers capped-price servicing so you can gain some assurance with running costs, and warranty is offered for unlimited kilometres for the first five years. 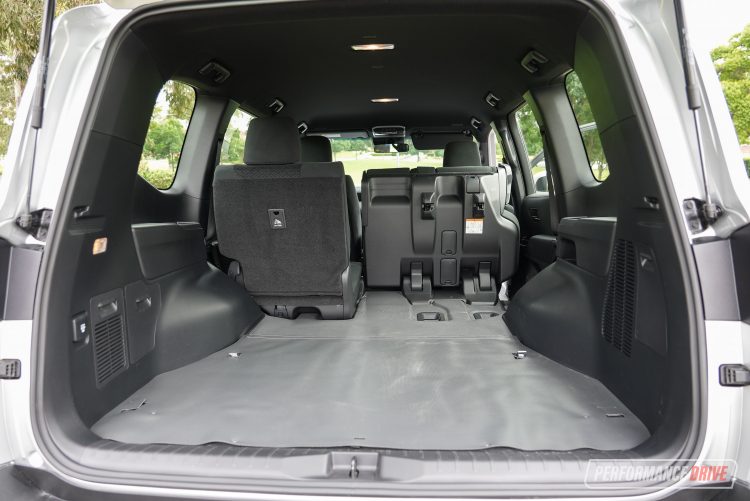 It will be a difficult pill to swallow for some, but the V8 engine had to go. Fuel economy and emission standards are now the priority. But Toyota has made the argument undebatable. You now get 27kW more power, 50Nm more torque (227kW/700Nm), and better fuel economy from the smaller 3.3-litre diesel V6 engine. The GX has also lost about 120kg along the way (2410kg tare). As a result, it feels more powerful and agile. Punch the throttle and it surges away with confidence. We timed 0-100km/h in just 7.43 seconds, which is not bad at all for such a big SUV. And it bettered our Sahara ZX time of 7.61 seconds. Performance also squashes the old 4.5 V8 diesel GX, according to our previous tests of 8.92 seconds.

The 10-speed auto transmission makes the throttle feel a little sluggish when driven steadily. It might just be in the programming to make it as economical as possible, but because there are so many gears, it feels like it spends a lot of time slipping the torque converter or floating between the ratios. Only when you plant your foot down more does it feel like it solidly engages the gears and provides a more confident surge. In that sense it can seem like a CVT during low loads. We’ve noted a similar experience in other vehicles that feature a 10-speed auto too – e.g. the Ford Ranger. 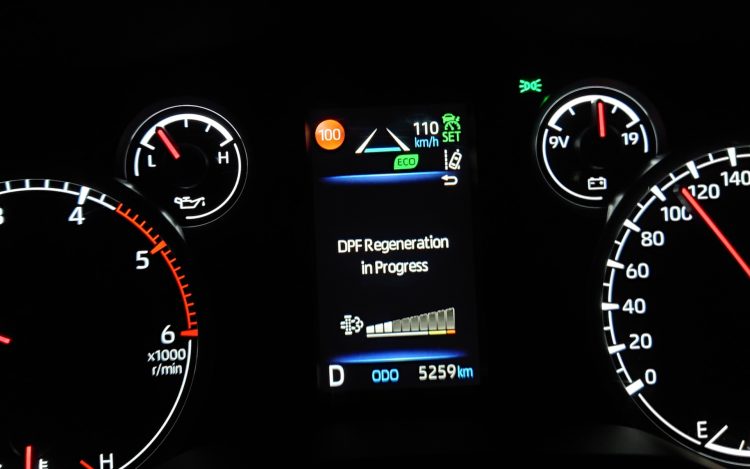 For those who may be sceptical about diesel particulate filter issues from other vehicles, Toyota has included a very transparent feature in the 300 Series. Basically, DPFs need to activate a regeneration cycle regularly at highway speeds, so the filter does not fill up. Not only does the LandCruiser now tell you when the regeneration is taking place, it also has a progress indicator in the dash. You can also manually activate the process by pressing a button in the dash if you know the car won’t get an opportunity to activate the process for an extended period.

Compared with the previous diesel V8 engine, the GX has officially improved its average fuel use by 0.6L/100km. Interestingly, the ‘urban’ fuel figure (11.3L/100km), under the same ADR81/02 standard, remains almost the same as the old 4.5 engine (11.2L). In other words, when driven hard or in areas with lots of stops and starts, the new engine seems to burn about the same amount as the old V8 engine.

During our time with this GX we averaged 10.2L/100km from a mixture of highway and city-style trips, although more so on the highway. That includes performance and off-road testing as well though. It’s still a little high when you compare it to SUVs with similar sized engines and performance figures, especially from the premium marques. Emissions has decreased by 15g/km to 235g/km. 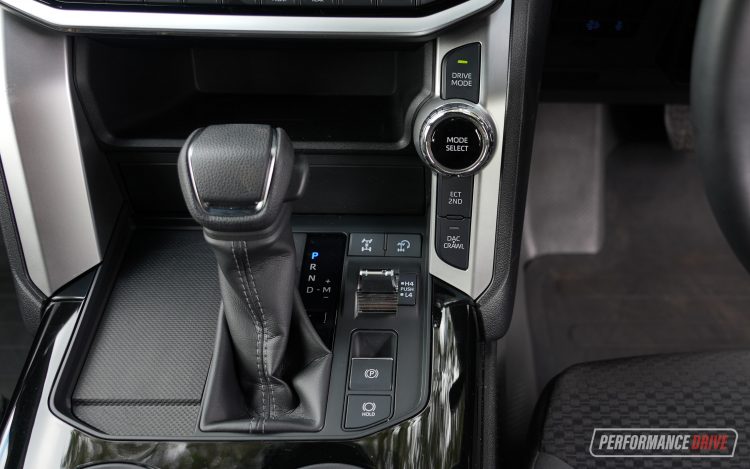 Disappointingly, the fuel tank in all variants has been reduced. It is now 110 litres instead of 138 litres. This would have been especially important for drivers travelling in remote areas or long distances. At least it contributes to that reduced weight. The theoretical range is now 1236km in this GX, down from 1453km in the 200 Series GX that had a 138L tank.

True, rugged off-road performance is demonstrated in many ways, with all models offering a greater ground clearance of 235mm (previously 230mm) and 245mm on the GX, low speed off-road cruise control, downhill assist control, hill-start assist control, and crawl control. Though, we were disappointed with the brightness of the LED headlights and high beam. They could be brighter for the Aussie outback. Approach and departure angles remain relatively unchanged, at 32 and 25 degrees respectively. 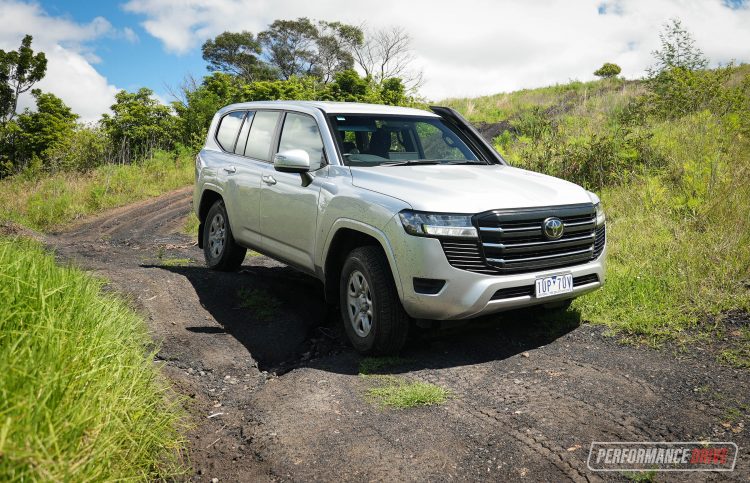 Off road it remains one of the most capable SUVs on the market in our view. It just gets on with ploughing through wherever you’re trying to go. And it doesn’t stop or even seem bothered. The GX comes with a centre diff lock while the GR Sport gets front and rear locks. But, honestly, if you’re tackling an area that stumps the GX, you’re probably so far off the track you should probably turn around anyway. Toyota has clearly ensured all of the important bits underneath are all tucked away, because now it looks almost completely flat under there. And there are some protection plates and so on for further assurance.

Based on the new TNGA-F ladder-type chassis with a live-axle rear end, lean and understeer expectedly manifest around corners on the road when pushed hard, especially given its size and off-road focus. You also get some tyre roar when you take corners briskly, but the GX does feature proper all-terrain tyres measuring a tall – and skinny – 245/75 (down from 285/65 on the old GX).

The steering is appropriately predictable, with more turns to full lock required than a regular SUV, and it gives adequate feedback for a vehicle of this stature. If you’re planning mostly on-road driving, we’d recommend the other variants as they are more suitable and designed as such. In saying that, you could fit some wider tyres here and it might help to improve feel and confidence. 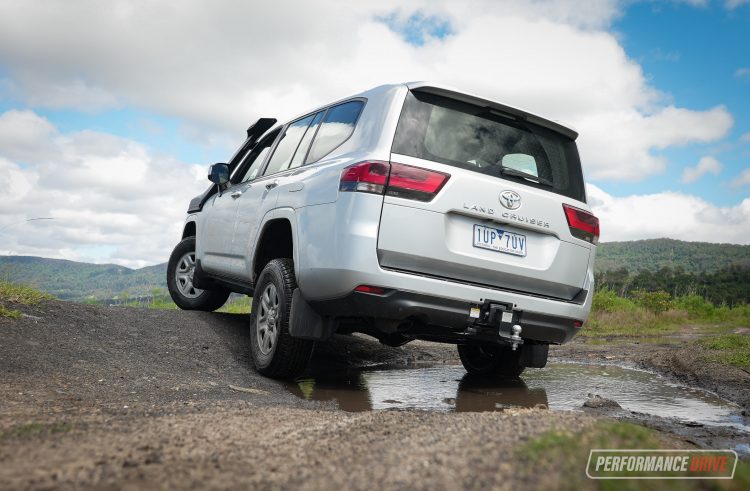 The modernisation of the Toyota LandCruiser in the new 300 Series has been excellently executed. Changing or even evolving a loved recipe is difficult, but the rewards are plentiful for the buyer in this case. Even though the V8 is gone, you can enjoy more power/torque and better fuel economy. It just makes sense.

For the GX specifically, it is the variant aimed at buyers who intend to hit the dirt on the reg’. Even though its price has increased by $9k over the previous generation, it comes with many more safety features and tech than ever before. And it still offers unmatched ruggedness and durability.