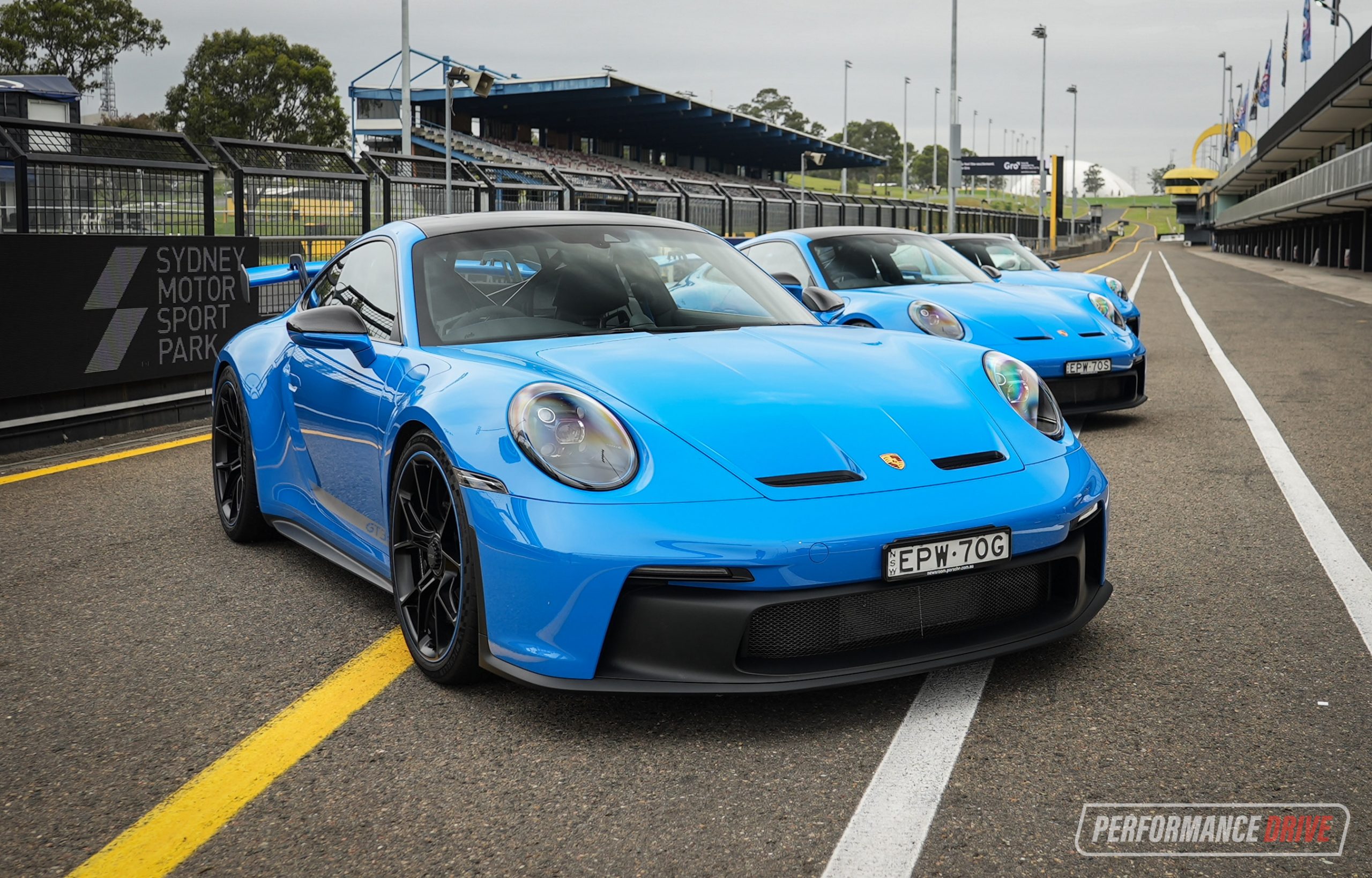 A race car that’s road legal? Pretty much. The new 2022 Porsche 911 GT3, 992 series, is about as close as it gets. And what better place to test it for the Australian launch than out on the track. Specifically, Sydney Motorsport Park. 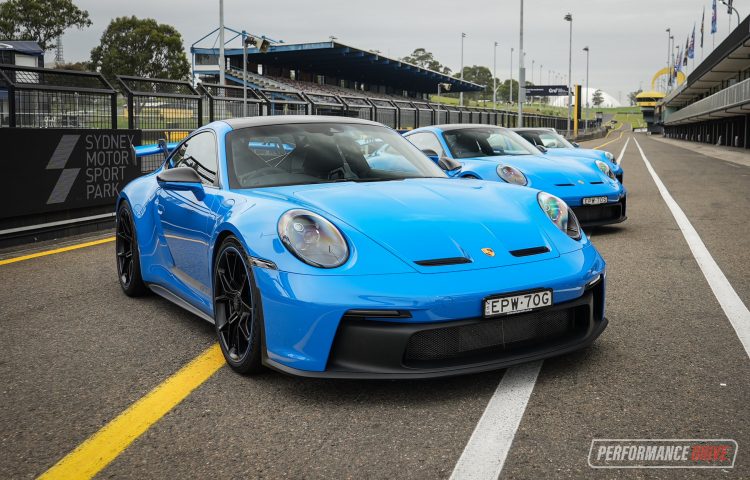 Unlike some rivals and other track specials out there, the 911 GT3 is developed directly through a dedicated motorsports division – Porsche Motorsport. You could say it is primarily developed as a racing car and then some adjustments are made so it’s road legal and provides some level of comfort and convenience.

For the 992 series, as per usual with Porsche products, engineers have made incremental improvements and tweaks. It is a forever-evolving nameplate, with bits and pieces carried over from the same fundamental profile, but there are plenty of upgrades and revisions to ensure it is even faster around the track. 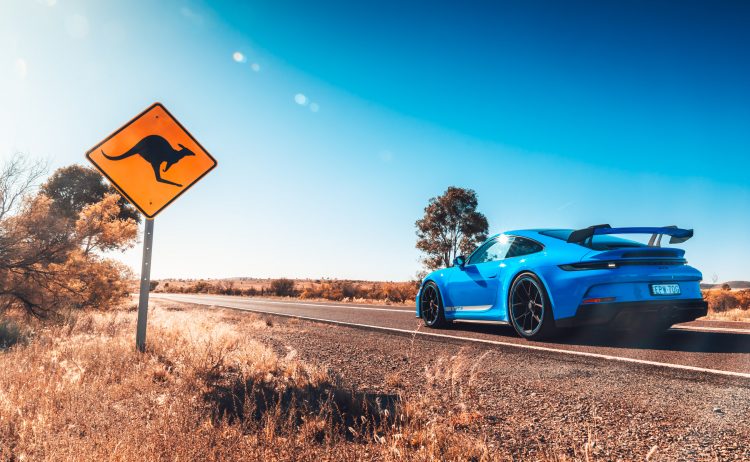 Just two versions are on sale in Australia. The PDK seven-speed dual-clutch auto and the no-cost optional manual. That’s it. But you can go nuts with customisation options to tailor your toy to suit your needs. For example, you can option for the no-cost-extra Club Sport Package which brings in a roll cage system, six-point harness for the driver, and a motorsport-certified fire extinguisher.

You can also add racing bucket seats ($11,250), harness belts for the passenger, a carbon fibre roof ($7470), and the Porsche Ceramic Composite Brake package ($19,290). We feel the PCCB package should probably come as standard, considering Porsche says most buyers take the vehicle to race tracks anyway. 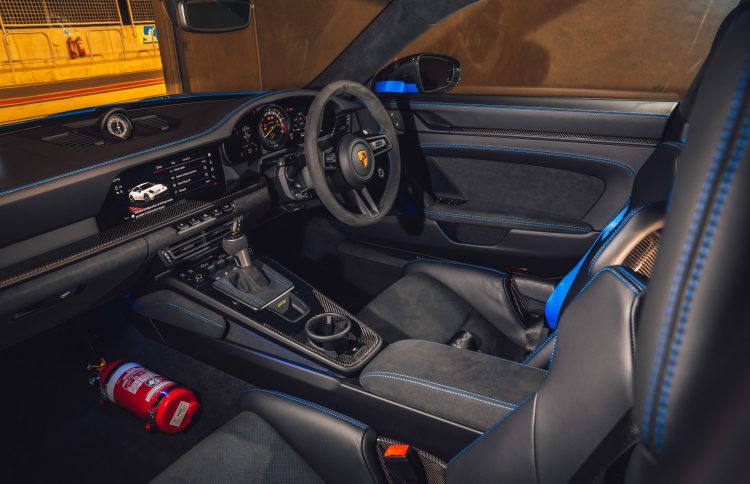 You can also go the other way with options, which we find interesting. For example you can add a 12-speaker Bose sound system, heated seats, extended leather interior, and opt for a range of badges and logos spread throughout the cabin.

There are also cool decals for the sides on the outside to choose from, and options to have various bits and pieces in a custom colour combination. In other words, you don’t have to worry about confusing your GT3 with somebody else’s. There’s also the Touring Package which deletes the big rear wing, adds a nose-lift suspension function for speed bumps and driveways, digital radio, and a rear-view camera, among other things. 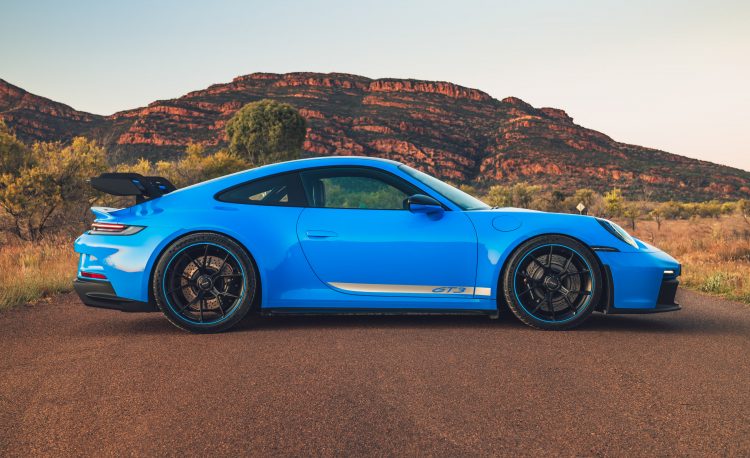 The engine is derived from the GT3 R racing car engine, and features dry-sump lubrication, six individual throttle bodies, and a variable intake manifold to ensure the engine is always getting the air it needs. A stainless steel exhaust system helps provide that iconic and intoxicating flat-six howl, while also saving 10kg.

Although the GT3 has never been about outright straight-line speed or acceleration, Porsche says the new model can sprint from 0-100km/h in just 3.4 seconds. That’s the same as before when fitted with the PDK auto. During our test we did clip the Vbox on to see what it could do.

Using the main straight at the track we recorded the sprint in 3.87 seconds. However, the Vbox showed a slight uphill rise of 3.27m in altitude from start to finish. We were also told to leave the traction control on during the event and, as you can see in the video below, this can cause the car to bog down due automatic brake intervention. It could definitely achieve much quicker times in ideal conditions. 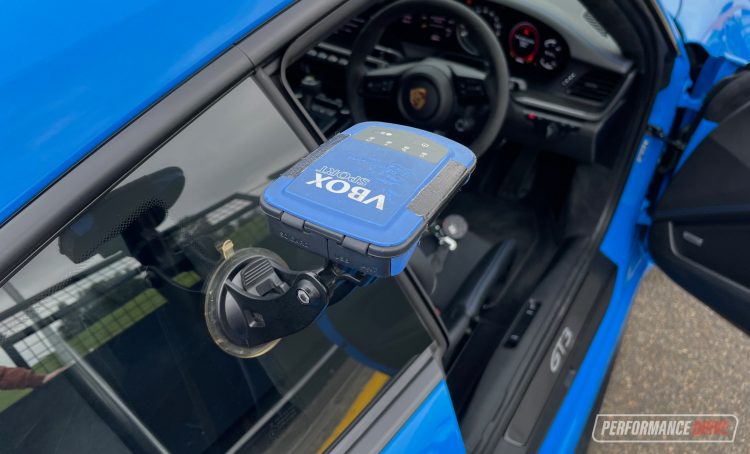 What this car is designed for, above anything else, is attacking corners, sprinting between them including getting the power down to the ground, and decelerating as quick as it accelerates. And boy does it live up to its design brief.

Starting with the steering and handling, the new model feels mechanical, natural and highly engaging. The steering is not too twitchy but provides all the feedback and knowledge you need to make comfortable and confident turns. You’re immediately aware if there is a minor traction loss, although you do need to push extremely hard to experience such an event (or ignore the natural racing lines). And it is easy to correct.

For example, a bit of understeer can be fixed by simply rolling off the throttle, gently, and then reapplying the power to engage the electronic differential lock (mechanical lock in the manual transmission version). From there you can apply the throttle progressively and enjoy the naturally aspirated six-cylinder as it sings its glorious song. Power-down traction is incredible, no doubt thanks to the 315/30 rear tyres (up 10mm from before). 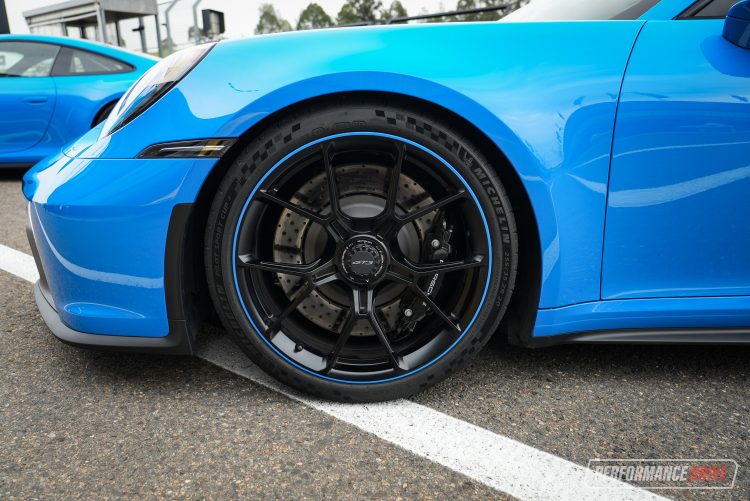 Speaking of rear end traction, you may have noticed the awesome swan-neck rear wing. It’s not there for decoration. Thanks to the top-hanging mounting configuration the new wing provides 50 per cent more downforce in the default setting compared with the previous setup.

Owners can adjust the wing’s aggressiveness too, and in its track setting Porsche says there is up to 150 per cent more downforce than before, at 200km/h. It’s no wonder this new model is 17.5 seconds quicker around the Nurburgring than the predecessor. Out at Sydney Motorsport Park you can enter the first corner at around 180km/h or more. And it’s here where you can feel the rear end being planted into the ground, resulting in utter stability. All you need to do is focus on when to apply power and get ready for the next corner. 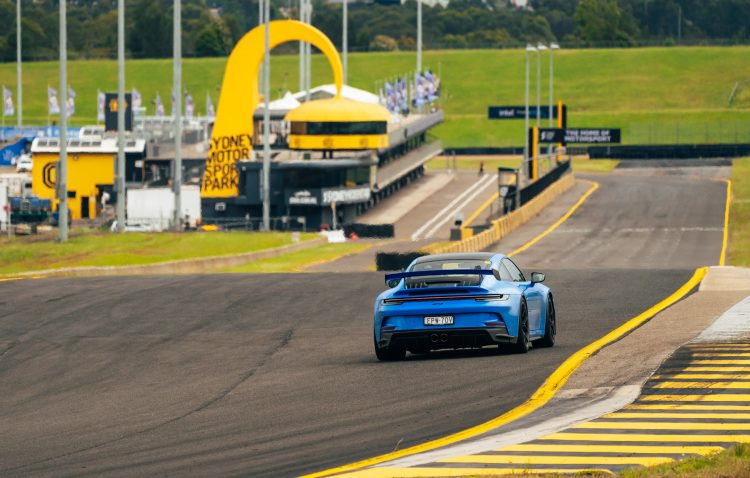 The front end is also restyled and incorporates a low splitter, helping to reduce lift. The new-look lower intakes are also marvellously simplistic, with a deep central air dam channelling flow to the radiator and side shrouds guiding cooling air to the front brakes.

Airflow is then vented through a motorsport-style two-part opening in the carbon fibre bonnet, which also helps to press the front end downward for more grip. A new double wishbone front end helps the car lean into corners, too, while providing optimal tyre footprint on the ground at all times.

Braking performance is exceptional, as we’ve all come to expect from Porsche. We clocked 100-0km/h in just 34.37 metres, which is proper supercar stuff. But more importantly the resistance to brake fade and deteriorating pedal feel is not evident. At all. Even after multiple fast laps on the circuit, the pedal and the braking performance feels exactly the same. There is no change. It is unbelievable good.

If you want a new vehicle that can be taken to the track, for leisure or competition, straight from the showroom floor, and you can afford around $370k, we’d strongly encourage you to buy one of these. We would. This has been specifically designed for exactly that sort of thing.

Thousands, if not millions of man-hours, over decades of evolution and precise, incremental improvement has gone into this car. It’s extremely fast, spectacular to listen to, and it offers surplus adjustment and customisation both in terms of options and driving characteristics. As a driving enthusiast, you’ll adore every speck of it.