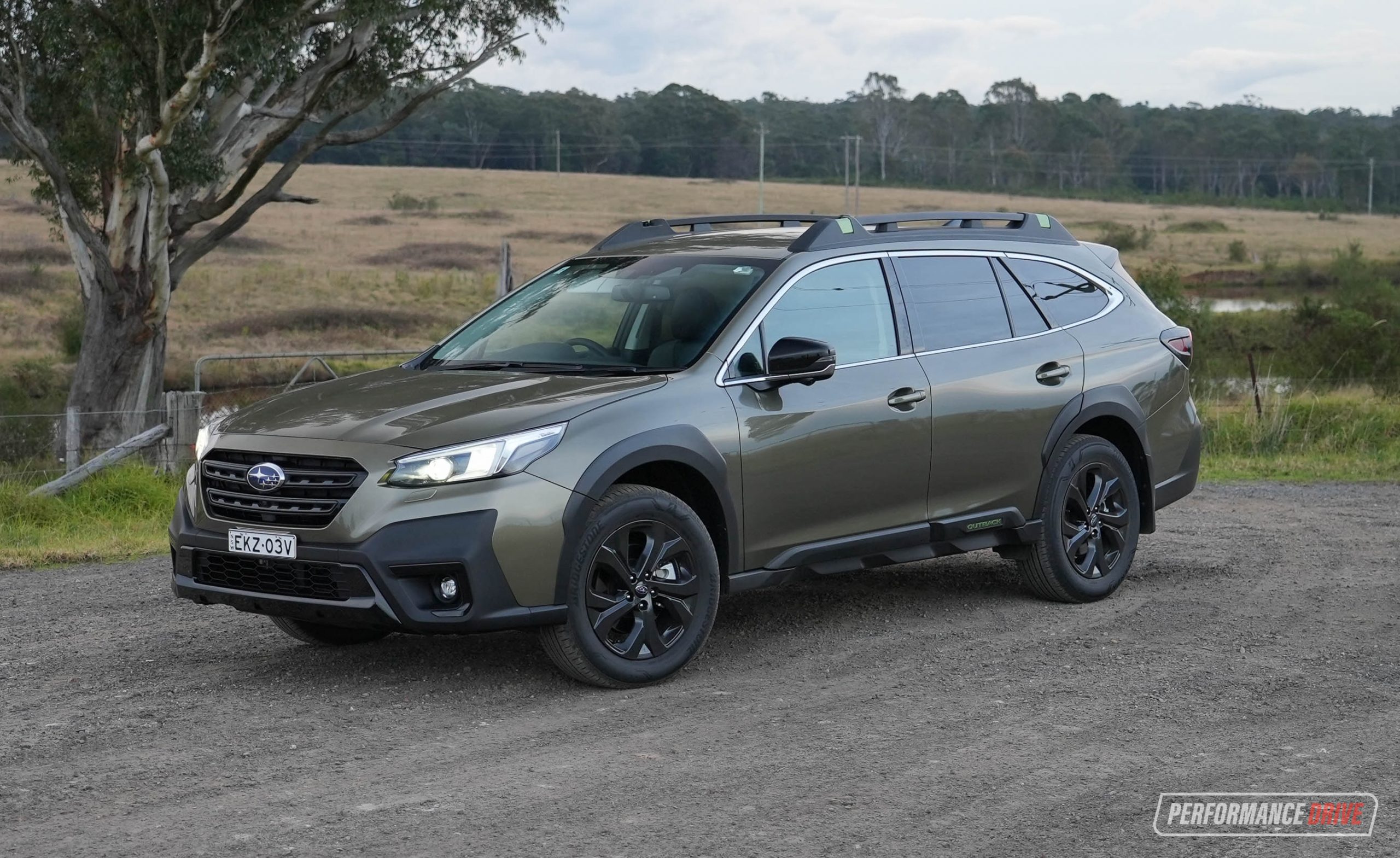 It would have to be one of the most iconic all-wheel drive wagons in Australia. Way back in 1996, the first Subaru Outback was an instant hit with Aussie buyers. It was a perfect match to our rough terrain and adventurous lifestyles. Yet, it was sophisticated enough for the commute during the week and to drop the kids off to soccer practice, without the excesses of a large SUV. 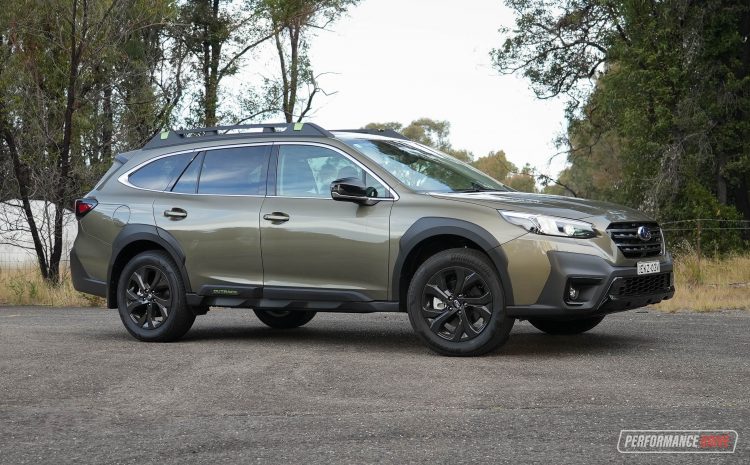 Now smarter, safer, bigger, and with more rugged styling, the sixth-generation, 2021 Subaru Outback has touched down and it wants to keep the heritage flame burning.

Despite its popularity Down Under, the lineup has been simplified to three variants and just one powertrain. The plainly named Outback, the Sport, and the Touring. All variants come with a 90-per-cent-new 2.5-litre, four-cylinder naturally aspirated petrol engine, and still in the trademark Subaru ‘boxer’ horizontally-opposed layout. A constantly variable automatic transmission continues to drive all fours permanently as part of the Japanese brand’s main differentiator from the masses. 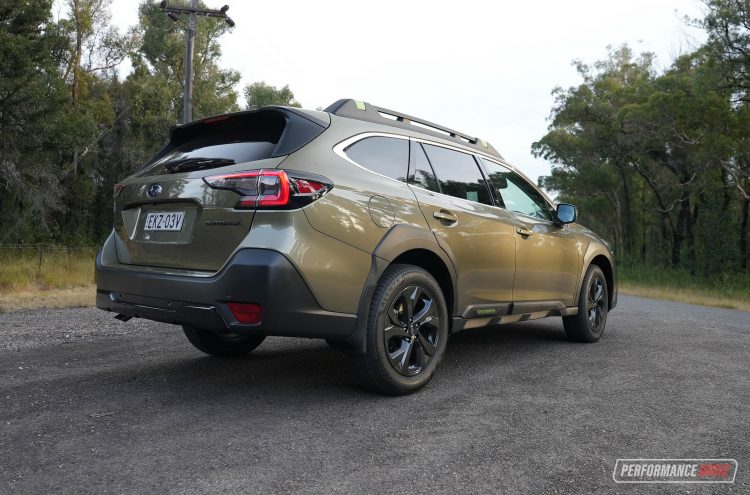 First and foremost, the new Outback has made giant leaps in external design since that humble ’90s family wagon. But at the same time, it has not lost its overall proportions of that conservative heightened wagon we fell in love with. Now, it looks rugged through and through. There is a mix of chunky unpainted panels and glossy black areas that give off the vibe of adventure and strength. Roof rails, lower spotlights and black alloys also make the Outback look tougher than ever before.

At the rear, there is more plastic cladding, so you don’t have to worry about scratching the paint, a large roof spoiler, and jagged three-dimensional horizontal taillights that help to increase perceived width. Overall, the design is spot on for conveying the Outback to be a rugged and robust and soft-roader for active lifestyles. 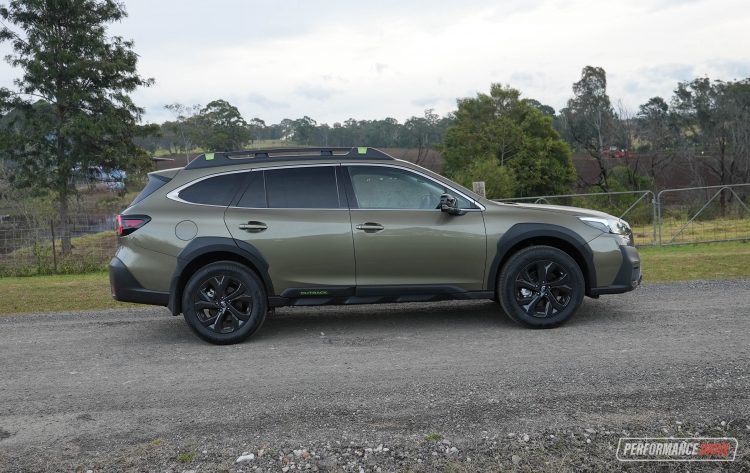 The Outback has also grown. It is now longer, which increases rear legroom by 6.1mm and cargo length by 23.9mm. Shoulder and hip room have also increased by 7mm and 30mm respectively, and there is 20mm more cargo opening width over the previous model. Volume-wise, the boot has also grown. It now fits 10 litres more than the previous version, with 522 litres, or 1267 litres with the second row folded down.

VFACTS classes the Outback as a ‘large SUV’, which means it has one of the smaller boots among its competition. But the Outback is more of a station-wagon. And if we still sold those, the Outback’s boot space would be near the top of its class. Measurements aside, you do feel there is a healthy increase in available space. The rear will comfortably fit three kids on long trips and three adults on shorter trips, as there is loads of legroom. 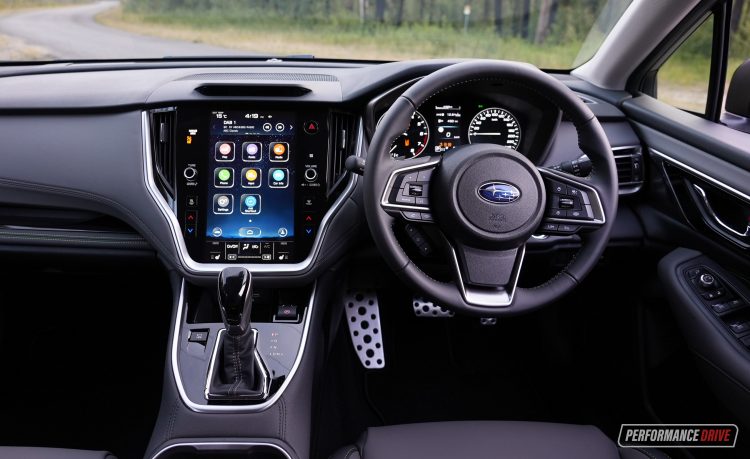 Still on the inside, rugged and chunky seem like main design themes. Buttons and materials look and feel hard wearing. However, the switch on the roof light detached itself and fell on our test car. Not very assuring. There are lots of storage holes and tiered shelves to throw your belongings into/onto. Our test vehicle had a robust honeycomb-holed rubber anti slip boot mat, which we highly recommend as it prevents cargo from sliding around, really well.

Taking over the centre console is an 11.6-inch portrait-oriented touch-screen that controls many functions of the car. From here, you control the multimedia, car settings and the seat and air-con settings. Even with our extended time with the Outback, we found the touch panel to be too busy and overloaded with settings. 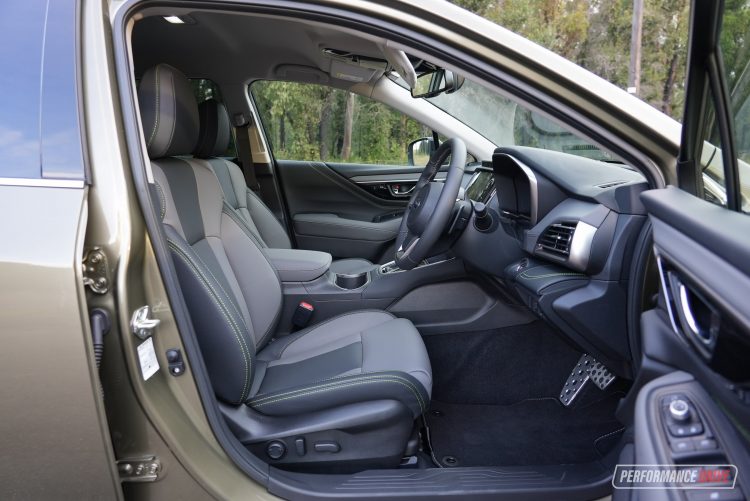 Subaru has missed the mark here we feel, especially considering its traditional owners’ interests. Other brands have been able to incorporate a lot of new settings into a touch-screen in an orderly layout that is quick and easy to grasp while driving. With the Outback, it’s as though they have thrown everything on the screen with no thought to separate items into sections, or at least make different sections uniquely and swiftly identifiable. We asked five different people (including a current 2006 Outback owner) and they all thought the same. One even suggested the screen being just as distracting as using a mobile phone while driving.

There is also a small 4.2-inch info display between two large mechanical and rather old-looking dials within the instrument cluster. In fact, there is not a lot of elegance or classiness about anything inside if that is what you are attracted to. At least Subaru has improved on the blocky alien movie styled font used in previous generations. 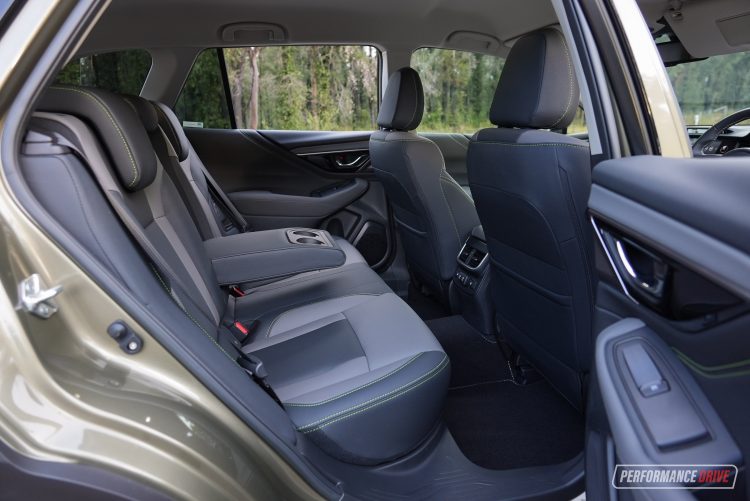 An area where Subaru has become a trailblazer is in safety. The Outback scored a record high of 96 per cent in the ‘Safety Assist’ category by ANCAP. Is Subaru the new Volvo? No matter which model you opt for, all of Subaru’s latest safety tech comes as standard in the 2021 Outback. One differentiating feature is Subaru’s very advanced driver attention detection system.

Driver focus levels are detected through driving behaviour and an on-board camera that monitors the driver’s eye movements. If low focus is sensed, an alert is sounded. We found it quite accurate in getting our attention at the appropriate times, though some argumentative driver types might find it annoying – it can even pick up a yawn, for example, and notify you to keep your eyes on the road.

We also appreciated a feature we haven’t seen before. The adaptive cruise control has adjustable acceleration response. In other words, you can adjust how heavy you want acceleration to be when it comes to maintaining your set speed on a hill, or when the path becomes clear of vehicles ahead. Very driver centric. 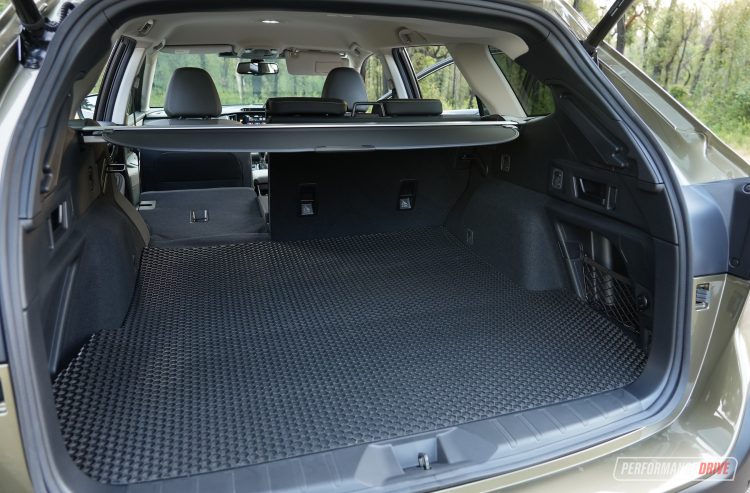 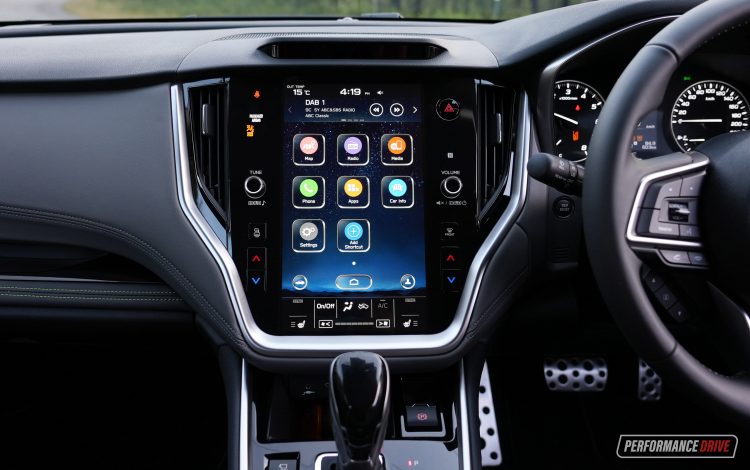 Opting for the Sport variant and you also receive sat-nav, front- and side-view cameras, a powered and handsfree tailgate, water repellent seat trim, heated front seats, sports pedals, an increase from four to eight cargo area tie-down points, and black-painted exterior elements. In a rare offering, you also get heated rear seats in the Sport and Touring models, though there is no wireless phone charger available in any spec.

Subaru offers a fantastic five-year, unlimited kilometre warranty and 12 months of free road-side assistance. You also get five years or 62,500km of capped-price servicing. Servicing is required every 12 months or 12,500km 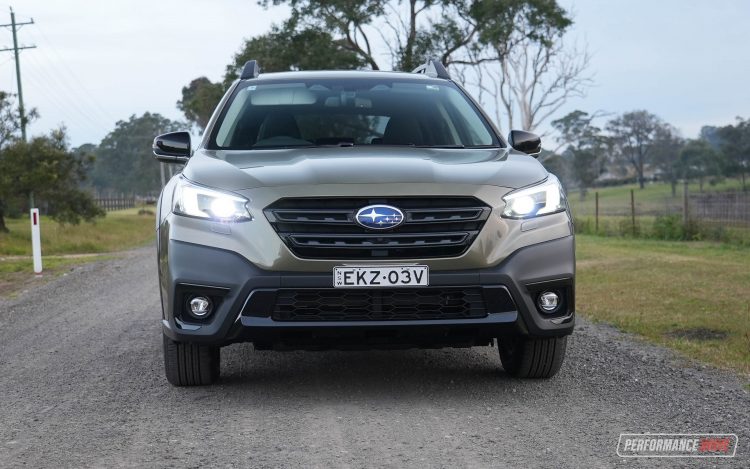 It seems that Subaru will only be dragged away kicking and screaming from its unique four-cylinder horizontal setup. While most manufacturers are moving towards hybrids and fully electric powertrains, Subaru won’t even add a turbo to this all-petrol lineup. Although, overseas, there is a fresh (and highly appealing) 2.4 turbo available, but Australia misses out.

Subaru states that this 2.5-litre unit is 90 per cent new, yet it only sees moderate power and torque gains, and the same fuel economy average from over five years ago in the old 2.5i Outback. The new unit produces 138kW at 5800rpm, and a measly 245Nm of torque between 3400-4600rpm. This is an increase of 9kW and 10Nm over the previous generation.

On the road, the lack of torque is the what you notice the most. The engine revs need to be high to get the job done. Especially up hills or when you are carrying a load. The engine does not feel like it’s in its natural habitat during high revs, either – so you really feel like you’re pushing it when you’re not even driving with haste. At the least, a turbo boost would immensely help the Outback here. We clocked 0-100km/h in a best of 9.42 seconds using our Vbox. 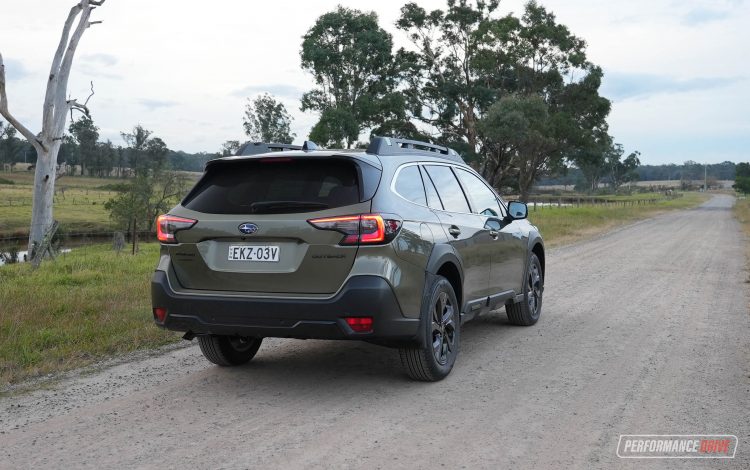 In what we hope was just a one-off event, our test car’s ‘check engine’ light appeared two days into our review. After a couple of engine cycles and about 100km travel back to base, while keeping an eye on things (it drove normal), the light disappeared by itself and didn’t come back. Our OBD2 scanner reported that the cause was “intake manifold flap; bank 1: stuck open”. 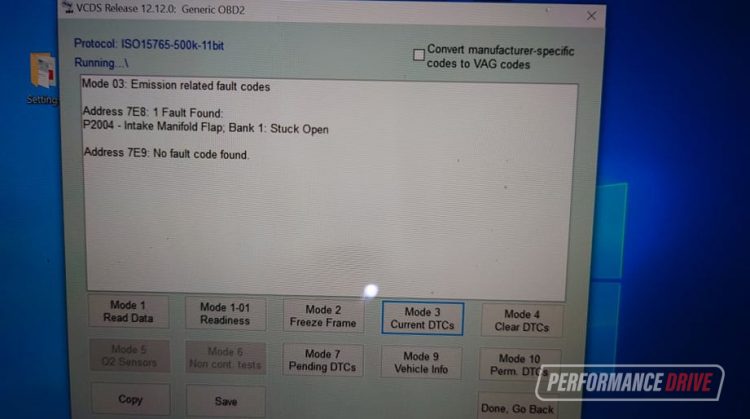 The engine was not under any significant pressure during this time, with the fault occurring at 49km/h, and at 16.9 per cent throttle, at 1073rpm, according to our scanner. This is likely an isolated issue but we can’t help but wonder if this is a red flag in terms of ongoing reliability? 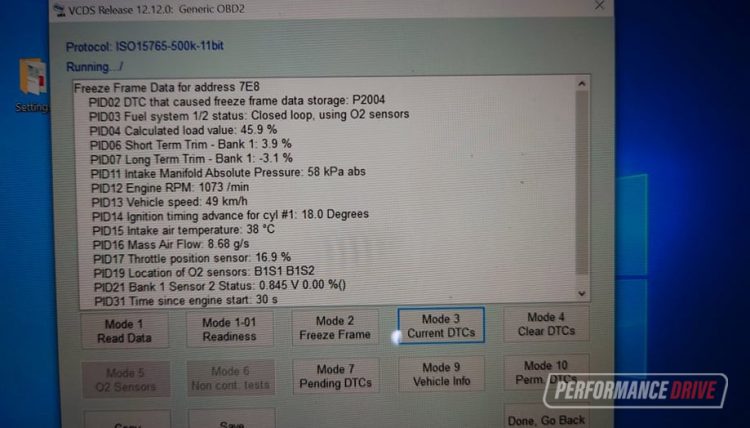 The CVT auto has been redesigned over the previous generation as well. There are eight artificial steps built into acceleration to mimic a conventional auto transmission’s gear shifts. But it still feels and sounds shrill and breathless to drive. The overhauled transmission and engine contribute to an increase in towing capacity to 2000kg (braked), which is a welcomed improvement from 1500kg.

Another important attribute where the Outback lags behind the competition is on fuel consumption. Over a 2000km distance of mixed city and highway driving, our average consumption was 8.0L/100km. The official average is 7.3L/100km. As engines become smaller and more fuel efficient, these figures trail behind market expectations, especially when you consider the low power outputs and performance you get in return. 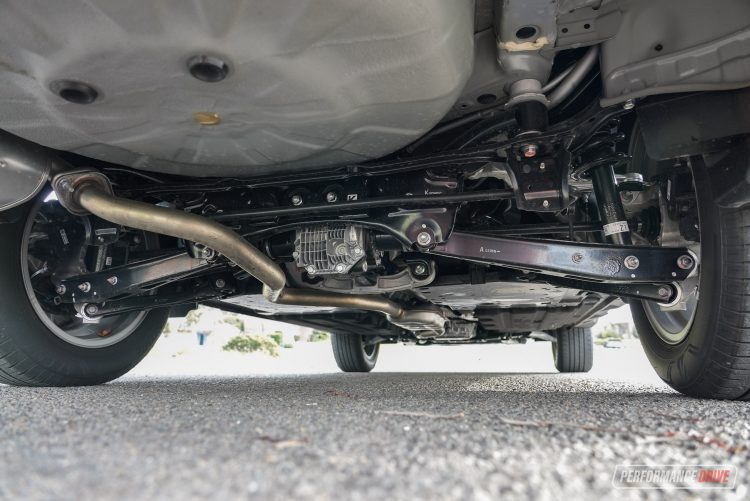 If the engine had more power, we think these fuel averages would be acceptable. In Subaru’s defence, unlike most SUVs, the Outback runs all four wheels permanently to give maximum traction and confidence during precarious driving conditions. Most SUVs and crossovers run an on-demand system, predominately powering two wheels.

A legacy trait that has flowed through over the years is its off-road performance. The suspension is soft, which means it absorbs bumps with minimal disturbance in the cabin. It will happily take the dirt roads for camping trips and the like. In turn, this means handling on the bitumen is on the sloppier side when it comes to tackling corners profligately. But appropriately so. It’s all within a rational and comfortable range. The steering is light in manoeuvrability, which is great for parking.

The Subaru Outback has built up a strong and reputable image of being a rugged adventurer that’s not too tall, excessive, or elegant to be taken on adventures. And nowadays, it’s one of the safest SUVs you can buy. We also love its rough appeal, practicality and onboard tech.

Wouldn’t it be great if it also had a powertrain with a bit more spice, or more frugal economy? We know Subaru has it in its soul. If it could have dug deeper, the Outback would be the ultimate adventurer that brings soft roading, performance, and safety all rolled into one.