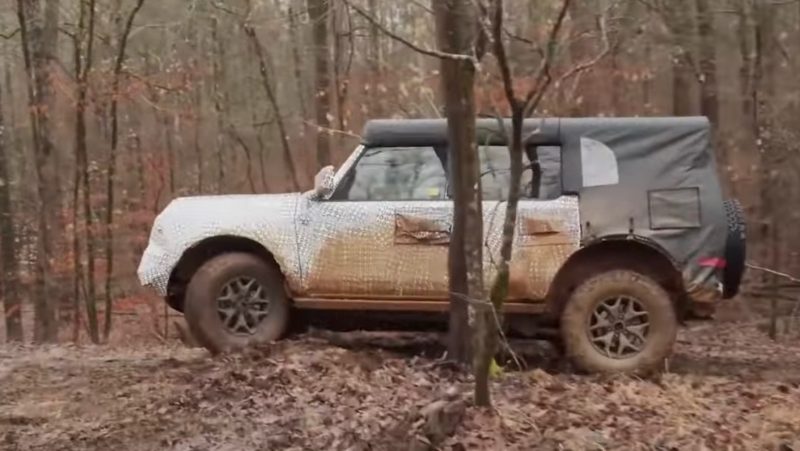 A preview of the upcoming 2021 Ford Bronco has surfaced on YouTube showing a prototype playing around in the mud. And boy does it look like a series off-roader, even featuring a ‘front dig’ function. The new model is set to be one of the most off-road-capable production cars around, featuring independent front suspension and a live axle rear end. There’s also set to be a huge range of driving and suspension modes, with speak of an optional electronically-adjustable package that can alter the ride height at the touch of a button.

Ford is set to offer a range of hardcore accessories and option packs for the new model as well, such as mud-bogger tyres mounted on special smaller-diameter wheels, extended wheel arches, and loads of colour and trim packages. In fact, according to reports Ford is planning over 150 different accessories for the 2021 Bronco.

Potentially included in the range of accessories and options is an array of serious components, such disconnecting sway bars, locking differentials, and a terrain response system of some kind. Within all of that, somewhere, it looks like there will be a unique feature (potentially optional), known as a front dig.

As shown in the video the front dig function essentially disconnects the rear axle from drive and allows the driver to lock the back wheels from turning – a bit like a handbrake. But with power continuing to be sent to the front wheels, wheelspin effectively tightens the vehicle’s turning radius. This is shown at around the 0:23 mark. It’s difficult to see if only the rear inside wheel is locked or both. If it is capable of braking just one wheel it’ll be a very appealing function,  particularly for the nerdiest and most avid of off-road driving enthusiasts.

The video also shows the awesome approach and departure angles of the new Bronco, as well as its impressive ground clearance. These will no doubt set new standards in this market space. Speaking of which, the 2021 Bronco will be pitched into the most rugged SUV segment, against the likes of the Jeep Wrangler Rubicon, as well as the Suzuki Jimny, Toyota LandCruiser 70 Series, and Mercedes-Benz G-Class to some degree. Both two- and four-door options will be available – also shown in the video – with removable roof/doors, at least as an option.

A full debut was set for the New York auto show in March but due to the coronavirus pandemic the unveiling will apparently take place later in the year. Market entry in the US will happen in 2021, though, according to reports. Check out the teaser video below for a preview of its impressive off-road performance.