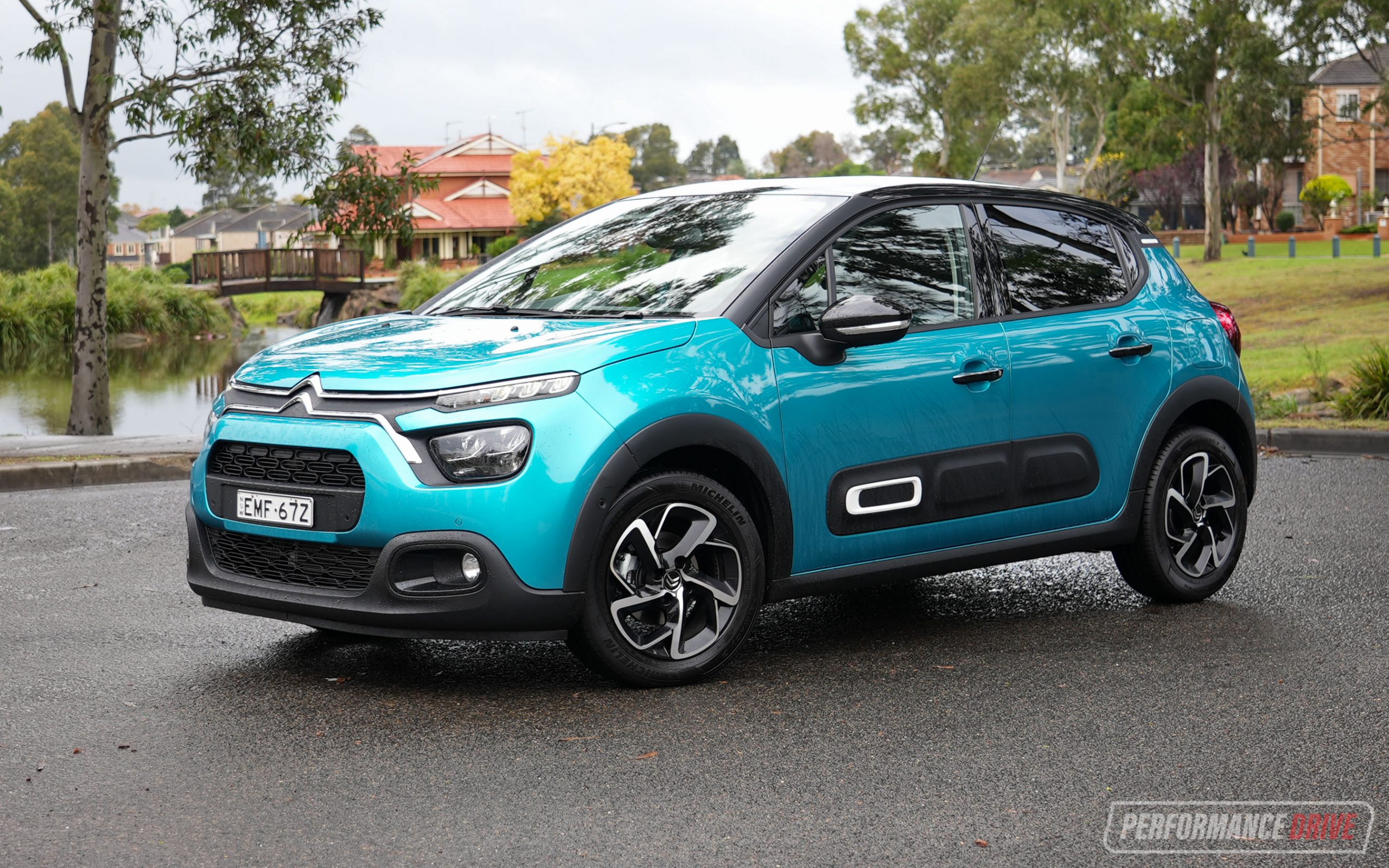 If you’re the type of person who has little interest in conforming to the conventional, the mainstream, or the boring, then you’re a candidate to be a future 2021 Citroen C3 Shine owner. Many cars on the market today follow a common theme. But not the C3. 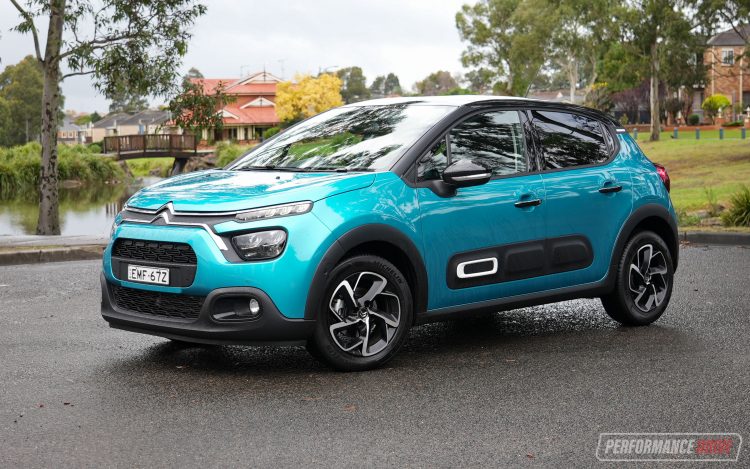 The Slovakian-built small hatch competes against the likes of the Audi A1 and MINI Cooper in Australia (according to VFACTS). But it doesn’t sell anywhere near as many units. This might be why Australia is only offering one engine in one variant, called the Shine. You get a thrifty 1.2-litre turbo-petrol three-cylinder engine that outputs 81kW and 205Nm. This is matched to a six-speed auto as standard.

The asking price is $28,990 (plus on-road costs). Let’s hop in and see what the French company is capable of producing among the tough standards of today. 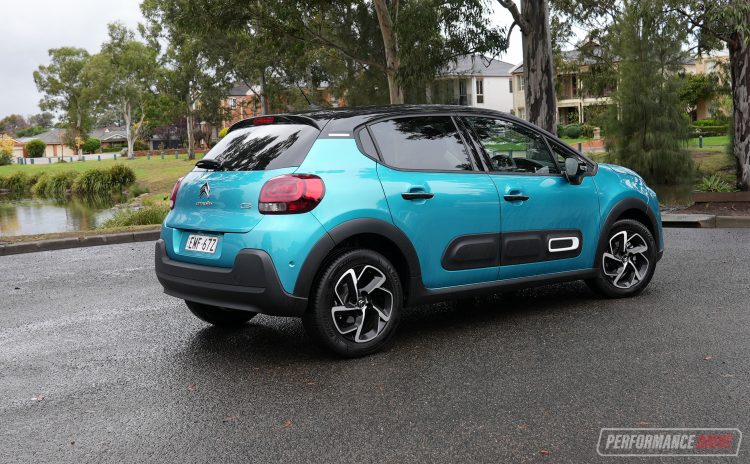 But there is a ridiculous omission. There is no adaptive cruise control. Nearly every car on the new car market now comes with this as standard, and here, you can’t even pay extra for it. Even worse is that the hardware is there (autonomous emergency braking). We’d also like to see high speed emergency braking, wireless phone charging capability, and a bigger infotainment screen. Comparing the price to the competition, it is on the more affordable side so you can cut it some slack, however, you can get more for your money with some non-direct rivals. 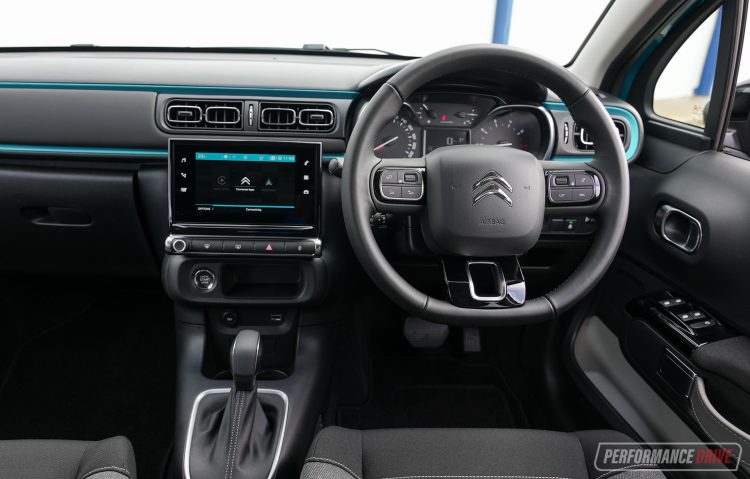 As for its funky external design, it’s a mix of quirky, sporty and fresh. There are lots of black plastics to make it look strong and sturdy, and the red painted inner surrounds around the fog lights and on the doors look athletic. At the front are high-sitting headlights and a slim chrome grille that incorporates the Citroen logo elegantly. The C3 invents a tri-colour theme that adds to its freshness. For example, you can get white body paint with red side mirrors and roof, and then there are those contrasting black areas.

The most unique item has to be what Citroen calls Airbump. These are the plastic cladding sections on the door, featuring a pocket of air inside. They go a long way to stop inevitable light damage from other car doors, trolleys, or other moving objects in car parks. We think they look cool, and they offer useful protection. We love the overall roundedness of the C3, too – it makes it look cute and agile at the same time. 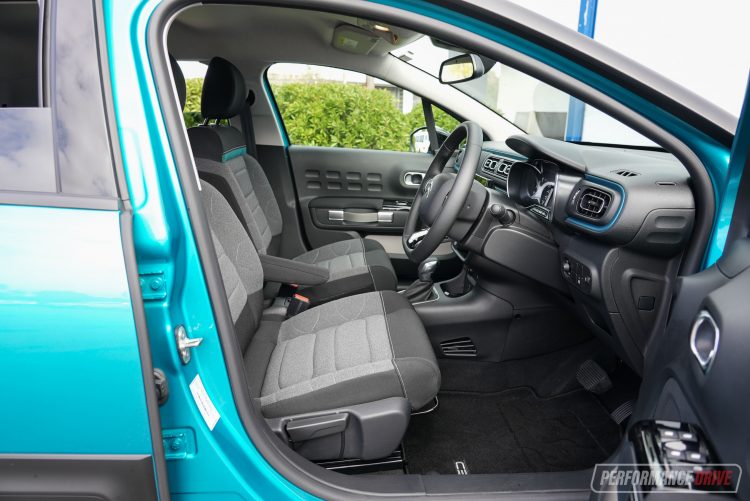 There is a common design theme that flows from the outside, in. Soft-cornered rectangles everywhere you look. From the air vents, to the steering wheel buttons, to the door handles. The layout is smooth, neat looking, and easy to grasp. Although, there are lots of hard scratchy surfaces as well, but everything feels strong and secure. Individualism is elevated with suitcase-like door grab handles and a youthful looking trim.

A real standout for us are the heavily bolstered seats. They are wonderfully supportive and pack plenty of padding. They feel like they would never wear out thanks to the canvas feel, and it seems like an easy to clean material. However, seat adjustments are manually operated. 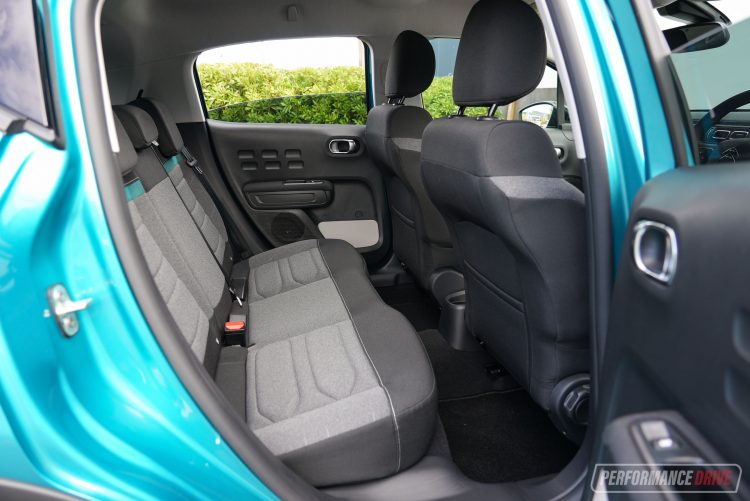 The interior is not without other misses too. Bottle holders in the doors, useable-size cup holders, and a centre console are all omitted. And the size of the glovebox is a bit of a joke. We also noticed an annoying delay when navigating through the touch-screen menus.

At 300 litres, boot space trumps the larger class Toyota Corolla hatch’s 217 litres, and the Kia Picanto’s 255 litres. But it falls short of the Audi A1’s 335L. If more room is required, the rear seats can be folded, but they don’t fold completely flat. 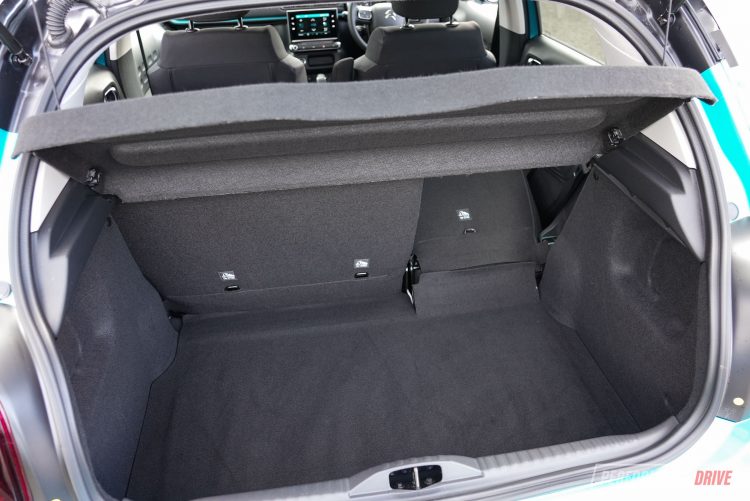 The only engine offered in the C3 in Australia does not sound like a willing unit on paper. Behind the wheel it feels faster than it is. It may be that the peppy three-cylinder sounds busier and more animated to four pot ones. Vibration levels and engine roughness is high, and it sounds like it revs higher than it is, giving off a false sense of progress.

It could also be that it produces lots of torque for a car that only weighs a little over a tonne (1067kg, tare), and from just 1500rpm. The official 0-100km/h sprint is achieved in 10.9 seconds. Our test measured it in just 9.47 seconds. It might not win you a lead off the traffic lights, but it is not fazed by hills like some small cars. The performance is very respectable against some of the larger rivals, too. 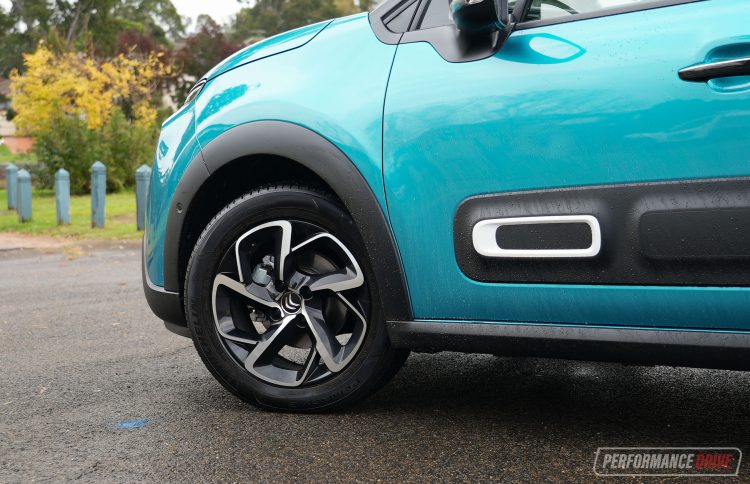 The ultimate advantage of a tiny 1.2-litre engine is in the economy it brings. The C3’s official average is a low 5.2L/100km. But we feel that this figure is quite optimistic in the real world. We could only achieve 6.8L/100km in our mixed suburban and highway routes.

You might be able to achieve closer to 5.2L/100km under specific driving conditions if you’re lucky. But our 6.8L/100km average is a little disappointing. It also requires a minimum of 95 RON petrol, which will cost you more at the petrol pump. 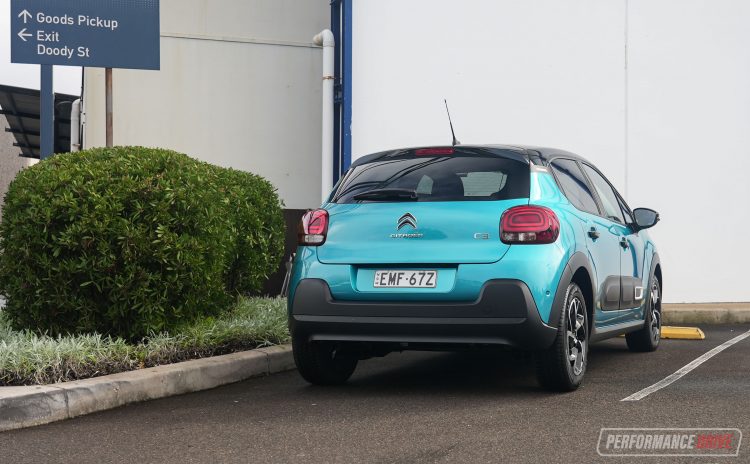 When the C3 is driven gently, the six-speed auto displays traits of delay and confusion, like a dual-clutch unit. It much prefers to be driven harder. This behaviour also ties in with troubled power delivery. Acceleration is often inconsistent and unrefined, almost like you’re constantly driving with an unsteady right foot.

The steering is well-balanced to give a confident feel on the freeway, and to zip around a tight carpark easily. But push it harder and it can flop around due to the soft, albeit very comfortable suspension. As a result, body roll is pronounced when taking on corners swiftly. It can be a lot of fun though, and with the characterful engine, it sometimes feels like you’re driving a cartoon.

We think the Citroen C3 makes a wonderful run-about small car. There’s a dash of added charisma and personality, and those unique looks and design elements go a long way to differentiate itself from other, more common compact hatches. But it doesn’t go far enough to make up a luxury light car like its price tag might suggests. If the price started from around $23-25k, it’d be much more appealing.

For the price to be justified there needs to be a little more refinement in NVH levels and power delivery, fewer hard plastics inside, and the availability of adaptive cruise control. It wouldn’t hurt if the interior was made to be more practical too. And we don’t mean the type of practical that is easy-to-clean or hard wearing – it does that well. We mean better storage and a centre console rather than just a driver’s armrest.

Overall though we think cars like this do have a firm place in the market. They inspire us all to think outside the box every once in a while and try something unique. In the end, this is more comfortable than any competitor, and its spirited engine is fun even though its main focus is economy – a feat plenty of manufacturers fail to match.

PROS:
– Zippy and willing engine performs better than its size might suggest
– Funky design that differentiates from the norm
– Seats are well-padded and supportive, material looks and feels cool too
– Comfortable ride
– Very light in weight, fun to drive