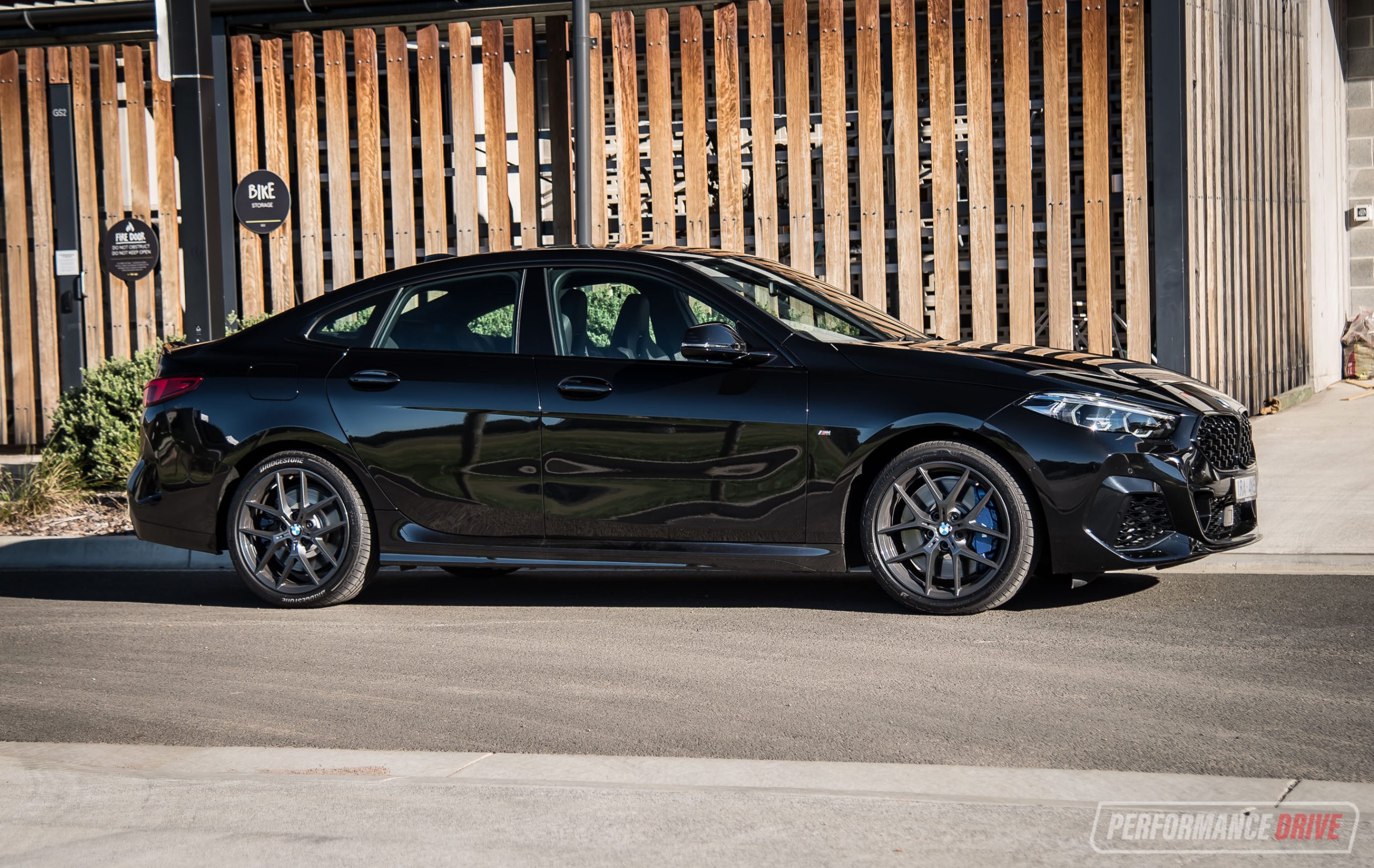 BMW steps into the small four-door coupe segment for the first time with the all-new 2 Series Gran Coupe. And sitting at the top of the range is this, the M235i Gran Coupe. It’s sleek, all-wheel drive, and features BMW’s most powerful turbo four-cylinder production engine it has ever made. All good so far. Avid BMW fans will be upset the M235i badge is no longer associated with a sick turbo six-cylinder, powering a rear-wheel drive coupe. But this new model steps into an all-new world. So it’s got to meet the demands of all-new customers. With all-wheel drive, it might actually be quicker from point-to-point on your favourite back road, too, especially in adverse conditions. But let’s talk more about that later. Given that this is the first Gran Coupe we must automatically give the new 2 Series praise as it is more practical than the previous 2 Series coupe models. With four doors, rear passengers can now enter and exit while retaining their dignity. And there are three seats in the back as opposed to just two in the old two-door coupe/convertible.

That middle rear seat is pretty tight and the rear door aperture is narrow, but no matter what way you look at it the practicality is improved over the predecessor. Rear headroom will be limited for taller passengers, but legroom for the outer seats is actually quite good considering the 2 Series is classed as a ‘small’ premium vehicle. BMW has even provided rear climate vents and a duo of USB-C charging ports, cup holders and bottle holders. Up the front it’s a typical BMW atmosphere. The dash and centre console are ever-so-slightly skewed toward the driver, with an excellent driving position, fully adjustable steering column, and power sports seats with encouraging side bolsters. Going for the M235i also adds a lovely three-spoke M sports steering wheel, matching M alloy pedals, and a dusting of M branding for the digital instrument cluster.

Being the flagship model the M235i comes extensively equipped. There are some optional extras available though, but these are mostly items that add frill rather than exist as a necessity. Gesture control is available from $600, which isn’t a bad price add-on in our opinion considering this technology debuted on the grand 7 Series not that long ago. A panoramic glass roof is $2600, active cruise control should be standard but is an $850 option, and metallic paint is $1700. Up on the dash is a 10.25-inch media screen which can be controlled via either the intuitive iDrive system on the console or by common touch operation on the screen. It’s running BMW’s latest 7.0 software, which is easy to understand and offers lots of depth but without being too complex.

It also presents some interesting apps, including a Sport Display page that shows you things like real-time g-force and turbo boost pressure. The interface includes Apple CarPlay but unfortunately there is no Android Auto. Digital radio, sat-nav, and an in-built hard drive are all included. There is a rear-view camera as well but no surround-view option available. ANCAP hasn’t tested the new 2 Series GC but with standard autonomous emergency braking in forward and reverse, pedestrian detection, a plethora of airbags and all of the customary stability and traction control mechanisms, it should pass modern standards with no problem. A Torsen mechanical limited-slip differential for the front axle adds further stability on the road, and the adaptive ‘xDrive’ all-wheel drive system can split the drive 50:50 between the front and rear axle if it needs to – in Comfort and Eco Pro driving modes the AWD system apportions drive only as required, to help conserve fuel.

Boot space is measured at 430 litres, which is about average for a small to medium sedan. It does feature a sedan-like boot lid and not a swooping hatch tailgate like you get on some four-door coupes. Although such an arrangement could improve practicality by opening up the access gateway into the boot, it might diminish the tight-packaged dynamics of the car. These modern four-cylinder engines really are amazing. To think this unit offers the same peak torque as the old M235i 3.0-litre turbo inline-six (later M240i models offered 500Nm), it’s no wonder carmakers downsize their engines. And it’s not like the outputs are only available in specific parts of the rev range. Here you have the full 450Nm available between just 1750rpm and it’s maintained up until 4500rpm.

You can really feel this behind the wheel. It surges strongly in high gears, effortlessly pulling and gathering speed with only mild throttle. You don’t need to change down gears as often as you might think, including during enthusiastic driving scenarios. Cross country conditions are eaten up particularly well as you can lean on that 450Nm early and utilise the AWD grip. Add some weather in there and we doubt the old rear-drive model would stand a chance keeping up in such conditions. We notice there is some understeer present, especially when using the throttle to push hard around bends. We found the best way get the most out of the AWD system was to pounce into corners, wash off speed abruptly, get the weight on the front end, and then feather the throttle around the apex before opening up the taps from then onward. You can really rely on that big torque to fling you onto the next corner.

Compared with the old RWD coupe this new M235i GC doesn’t feel like as much of a driver’s car in the corners, at least in the traditional sense. It’s not as tightly-strung as some serious hot hatches either. However, with all-weather grip and, we think, broader overall dynamics this new model will appeal to a wider audience – BMW should sell more of them, in other words. But overall we don’t think BMW has set it up to be as serious as the old model. Let us give you an example. This test car uses 225/40 Bridgestone Turanza T005 tyres front and rear, mounted on optional 18-inch alloy wheels (standard are 19s with 235/35). These tyres, in our opinion, are fine for a premium hatch but they aren’t as competent as the staggered-size (225/245) Michelin Pilot Super Sport tyres that you got on the old RWD M235i/M240i. In saying that, the Bridgestones are more affordable, retailing from approximately AU$260 per tyre compared with around $335 per tyre for the Michelins (based on 225/40 size, just as an example).

With superior tyres – such as the Pilot Super Sport – we think the GC could handle just that bit sharper and some of the understeer might recede. Again though it seems like BMW is preferring to reach a broader market with this new model by adopting a wider balance in settings and components compared with the old M235i/M240i. Fuel economy is rated at 7.6L/100km on the official combined cycle. That’s the same as the first M235i with the old N55 3.0-litre six. However, the later M240i with the newer B58 3.0L six consumed just 7.1L/100km on the official average cycle. It’s disappointing not to see an improvement in this area, even though this new model is all-wheel drive which does add load to the drivetrain and obviously adds weight.

So, what about the acceleration numbers? Using the standard launch control system, which optimises the peak 450Nm of torque for first and second gear, we saw a best 0-100km/h run of 5.08 seconds. That’s extremely quick for this style of vehicle. We also recorded the quarter mile in 13.34 seconds at 172km/h. We think the power level is just right, while the big torque is the stuff that really puts a grin on your face. The torque also helps to provide effortless mid-level performance when you want to drive with subtlety, such as during traffic light standoffs.

It’s not as sharp or a pure as the rear-wheel drive, inline-six M240i that it kind of replaces. The tyres aren’t as good, it’s a bit heavier, and the fuel consumption is higher. However, we think the new Gran Coupe with all-wheel drive and four doors gives the M235i nameplate a more dynamic and overall broader market reach. It should appeal to more consumers as a result. The in-car technology and the interior layout is superb, making it a user-friendly and approachable performance car. And one that anybody could happily use on a daily basis.