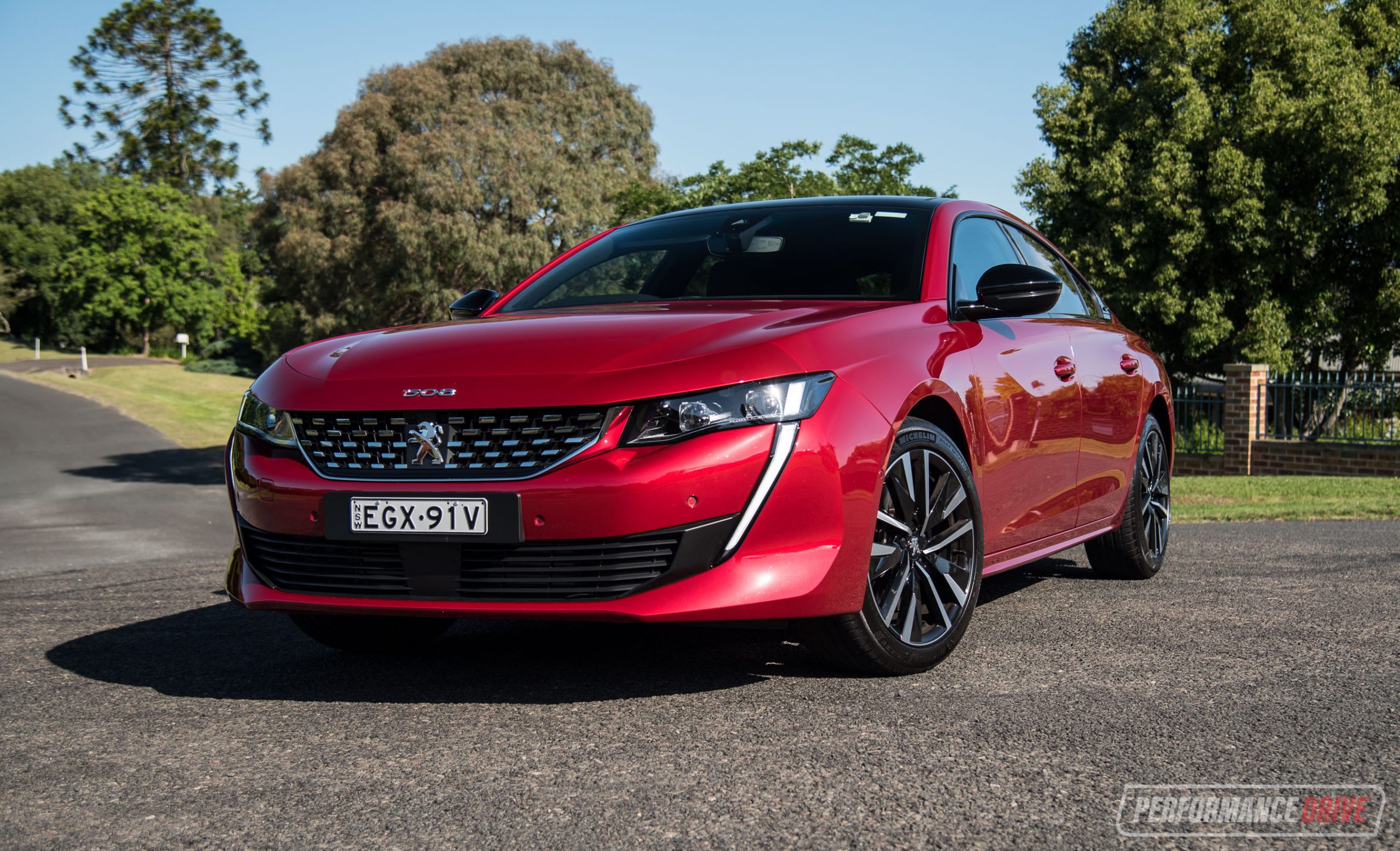 If there is one sedan that has a chance of bucking the SUV trend, it’s the 2020 Peugeot 508 GT. If you haven’t heard of it before, the new 508 plots itself in the medium sedan market with its tremendously bold looks, quality interior, and high level of luxury features. According to the Federal Chamber of Automotive Industries, it goes up against the likes of the Mazda6, Subaru Liberty, and the very popular Toyota Camry. 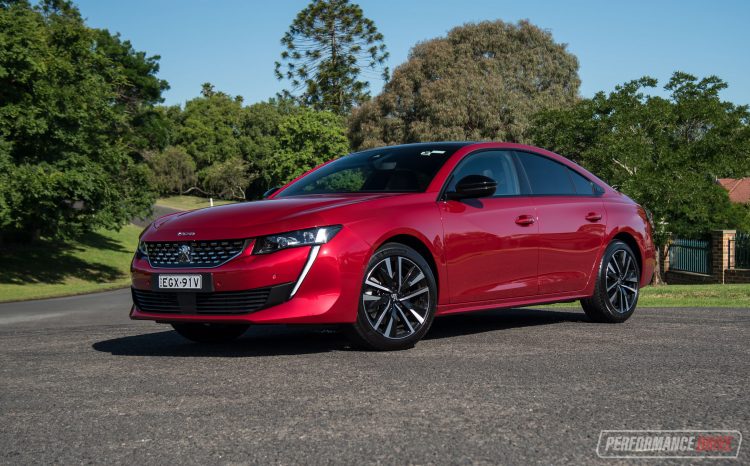 True to the Peugeot legacy, the 508 is French-built. It is available as a Fastback (similar to a sedan, except the rear window rises with the boot like a hatch) and Sportswagon. To keep its image high, the 508 only comes in the one high-spec GT trim in Australia. It moves along with a 1.6-litre turbo-petrol four-cylinder engine that kicks out 165kW and 300Nm, sent through the front wheels via an eight-speed auto transmission. 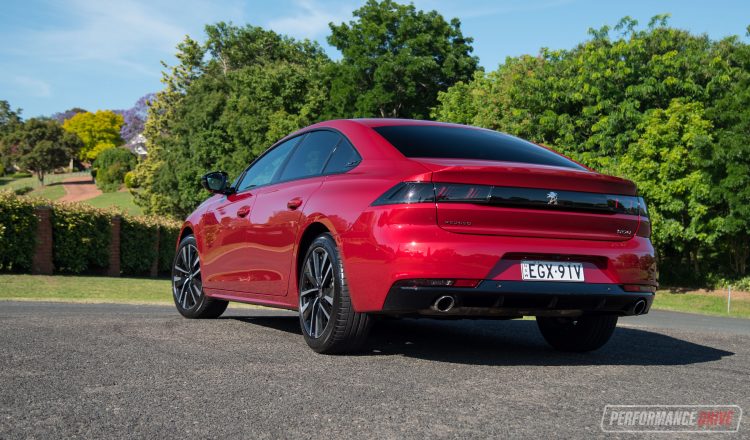 The first and most stunning element you’ll notice about the 508 is its bold styling. It looks totally unique, in a brilliant way. It doesn’t look like any other sedan on the market. At the front, it gabs your attention with its low arching bonnet line and swooping lower skirt. There is also a dotted chrome grille, and daytime lights that protrude down from the main lights to give off an angry and aggressive look – like the tusks of a powerful beast. The rear is just as eye-catching with a black lighting panel that bridges the ‘Claw’ LED taillights. There is an in-built spoiler that adds a sporty edge. We love it. 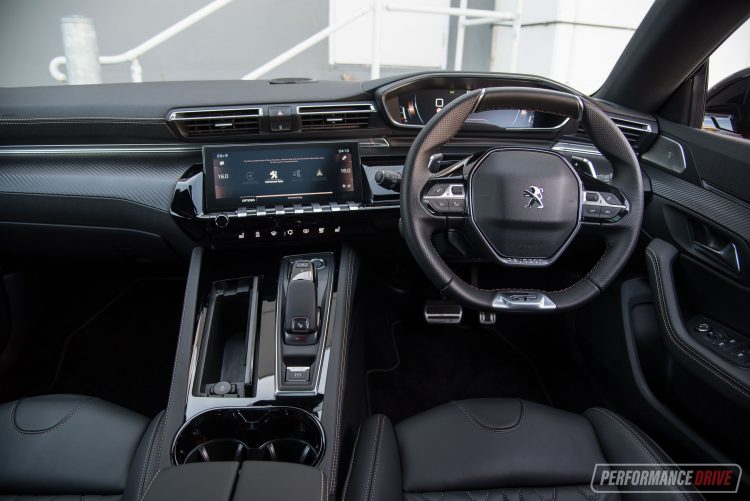 On the inside, the cabin exhibits the freshest of designs on the market today. There is a notable level of quality taken into every material you see and feel. The centre console rises up to an easy-reaching level like a Lexus, and the fully digital instrument cluster layout is clean and quick to grasp.

We especially love the large pronged buttons in the centre area, the aeroplane-like slanted gearstick, and the quilted Nappa leather seats – the front seats can even give you a massage as well. There are lots of soft-touch materials and a good balance of carbon-like trimming, polished metallic and glossy black areas that make it feel very luxurious. In fact, we think this is the best cabin of the segment in terms of design and quality. 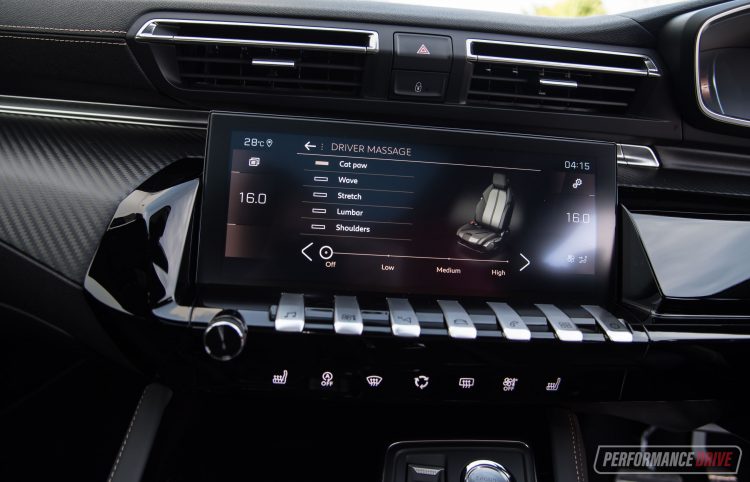 However, the excellent layouts and levels of luxury tend to eclipse practicality. There are not many cup holders or general spaces to dump your hand sanitiser or other essentials, compared with others. We also find the steering wheel positioning restrictive, blocking the view of the high-mount instrument cluster. It also goes without saying that cabin entry and exit is somewhat strenuous due to its low-cut roof. Once you’re in, you sit low to the ground.

Rear passengers suffer from a tight space if average-height passengers are in the front row. And because of that low swooping fastback roofline, head space is lacking for anyone over 180 centimetres. There are climate vents and charging ports in the back, which is great to see. 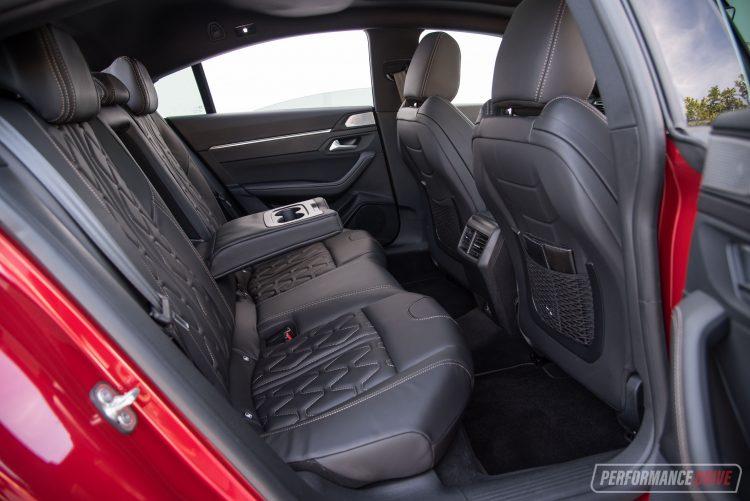 The boot in the 508 Fastback is not too shabby compared with the rest of the cabin’s space. Thanks to the full hatch liftback design, you get a huge opening space, and a wide and long boot floor. But it is quite shallow. Officially, it presents 487 litres, or 1537 litres if you flatten the rear seats down.

Being the GT, which is the top-spec in countries that offer more variants, equipment levels are very generous. As standard, you get autonomous emergency braking with forward collision warning and pedestrian detection, lane departure warning with active lane keeping aid, and blind-spot sensors, distance-controlled cruise control, a splendid 10-speaker sound system with a subwoofer, and Android Auto and Apple CarPlay via the 10-inch touch-screen. 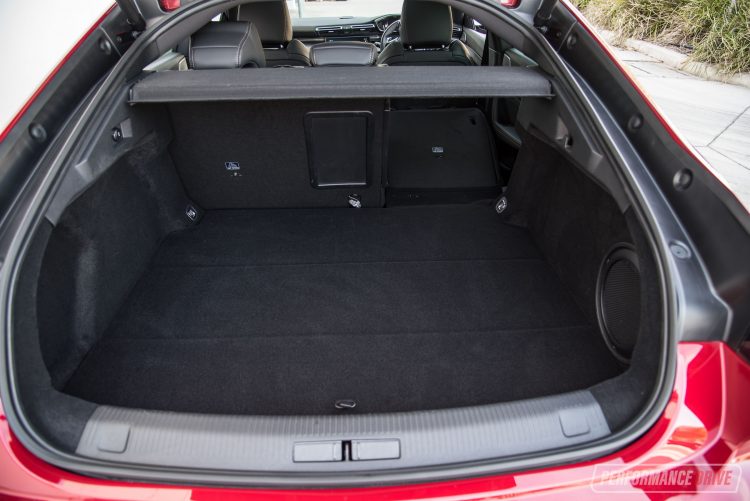 There’s nothing worse than a vehicle that looks fast and is suggestive of being sporty, but ends up being far from it. Well, 1.6 litres doesn’t seem like much, but as engines become more sophisticated, size doesn’t always count. 165kW is an impressive figure to extract from a 1.6, but more importantly, the very low tare weight of 1385kg of the 508 GT means it doesn’t need a big figure. This translates to a claimed 0-100km/h time of 8.1 seconds. Our testing revealed a best of 8.27 seconds. It’s not the fastest in its class, but it is right on the edge of being an exciting sporty car.

A higher output engine would no doubt make the 508 the ultimate medium sedan. However, with 300Nm of torque, it never feels like it struggles up big hills. It’s easy to stay ahead of the traffic without really trying, and it’s a terrific cruiser on the freeway. Eight gear ratios help to keep the engine revs low at higher speeds to conserve fuel.

The engine itself feels very smooth and naturally happy to rev. It’s not a shrill-sounding four, either. You get a cute, modest gurgle between gear shifts when driven hard. Sound and vibration levels are exceptionally well muted in the cabin. And the eight-speed auto is smooth and organised, and seems well calibrated to the small-capacity engine and its output delivery. 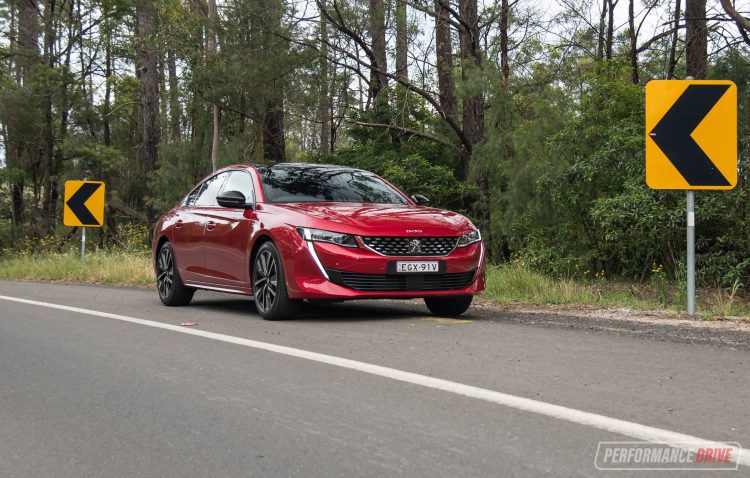 In the way of driving dynamics, Peugeot tends to orient its cars to be more comfortable than stiff and athletic. But the 508 GT ventures away from its French roots and offers a sporty rigidity, perhaps in line with what the design and GT name suggests. It’s still a very compliant ride, but it is also able to tackle corners with speed and confidence. Body roll is minimal, and you appreciate the length of the car as the front starts to do different things to the rear, and vice versa, when really pushed hard.

Being a low-riding sedan, there is not a lot of suspension travel from the independent front and rear setup. This means large potholes challenge the absorbability of the ride. But it takes on smaller bumps with absolute poise and composure. A perfect amount of feedback is returned to the driver through the tiny steering wheel. And the steering operates with a sporty weightiness at highway speeds and lighter weight at low speeds.

Braking performance deserves a special mention here, as the 508 exhibits one of the best-feeling brakes we have experienced in this class. They are brilliantly smooth and progressive. Digging in or jerking traits are non-existent. You can really show off your chauffeur skills when coming to a stop, with absolutely no back-and-forth wobble. 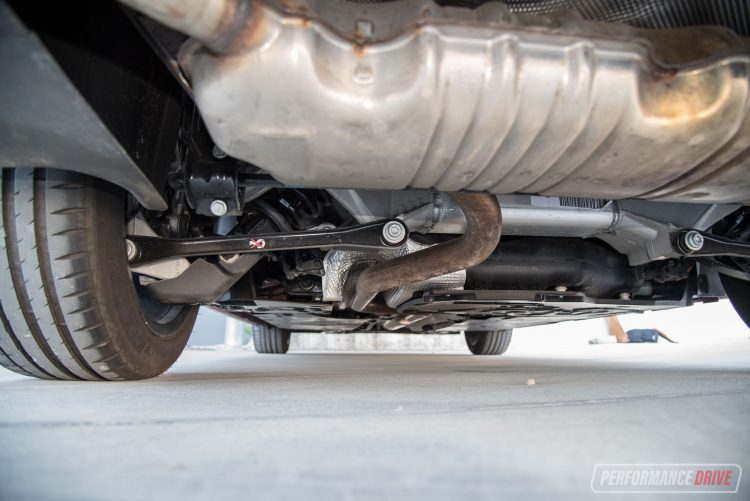 During our spirited testing, we achieved an average fuel consumption of 8.1L/100km. Its official rating of 6.3L/100km is commendable considering the power outputs, but you will probably only achieve that on long cruises or if you consistently take off gently. A more real-world average is still satisfactory. The fuel tank is quite large (62L), so although the fill up cost might seem high at the bowser, you can expect to travel at least 750-800km between fuel stops.

If you’re worried about reliability and support from a French-built car in Australia, fear not. Peugeot has done the needful and now offers a generous five-year, unlimited kilometre warranty, and roadside assistance for the same length of time. This is especially important for a rare and foreign brand (in Australia). Servicing is also required less than usual, with intervals set at 20,000km or 12 months, whichever comes first. Capped-price servicing plans are also available if you’re worried about on-going servicing costs.

Our week with the beautiful Peugeot 508 GT has been nothing short of majestic. On the outside, the design turns heads. On the inside, there’s no mistaking the efforts made to make this French fastback as luxurious as they come. On these points, well done, Peugeot.

Its price point in this market segment is quite steep. But it is very much a luxury proposition against the more conservative rivals. We suppose it would be even more appealing if there was more engine power on offer to make up for some of the additional costs. Nonetheless, it still excites, its just that sedans of today need to work a lot harder to lure customers away from the ever-common SUVs.

CONS:
– Rear seat can be squashy for some with that fastback roofline
– Steep price for this vehicle class
– Restricted to one variant in Australia