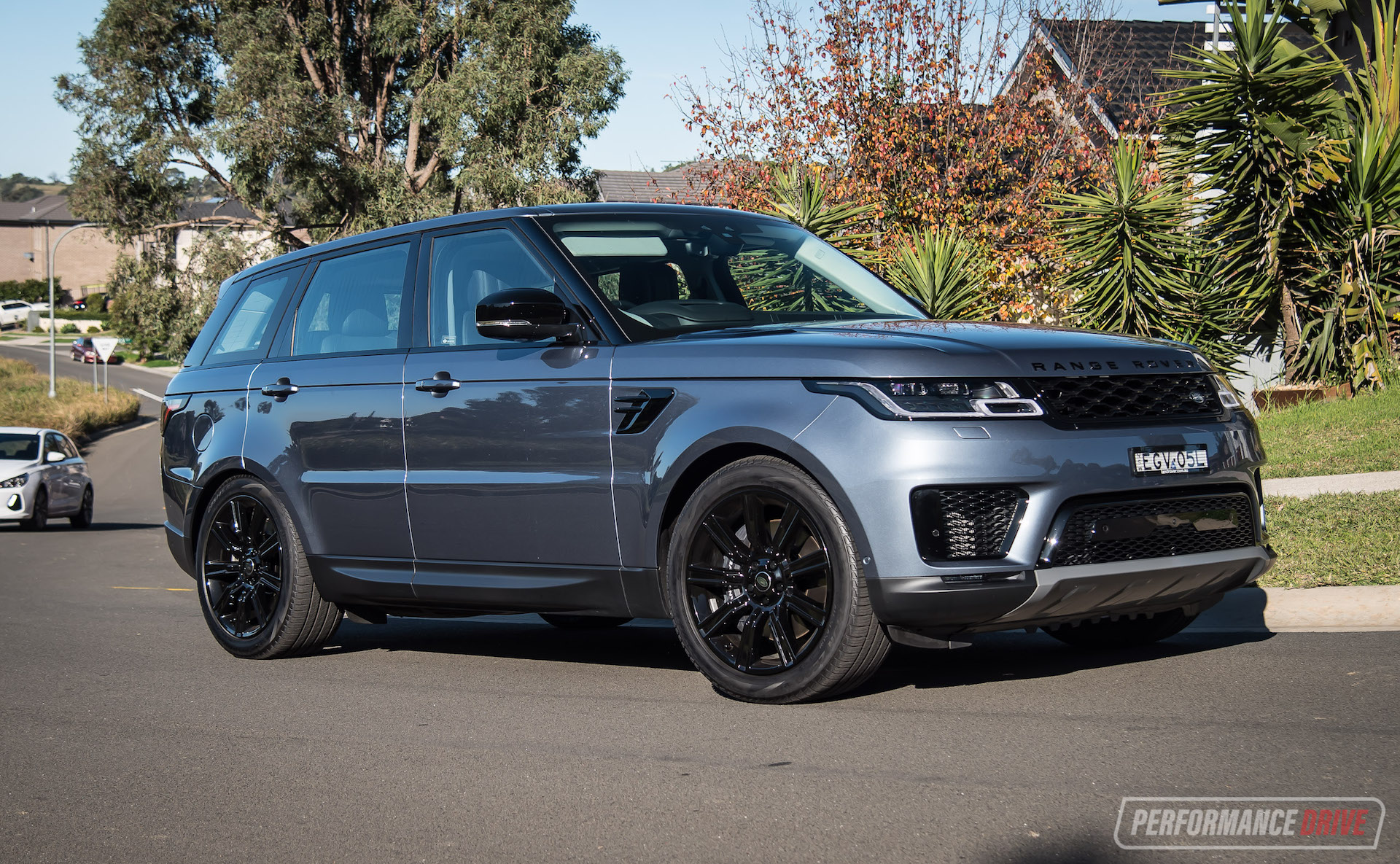 The latest Range Rover Sport is such a handsome SUV, isn’t it? And now to make it even more attractive to more of the market, in particular, the market that could be regarded as its arch nemesis; greenies, Land Rover is now offering it with a plug-in hybrid powertrain. It’s called the P400e. 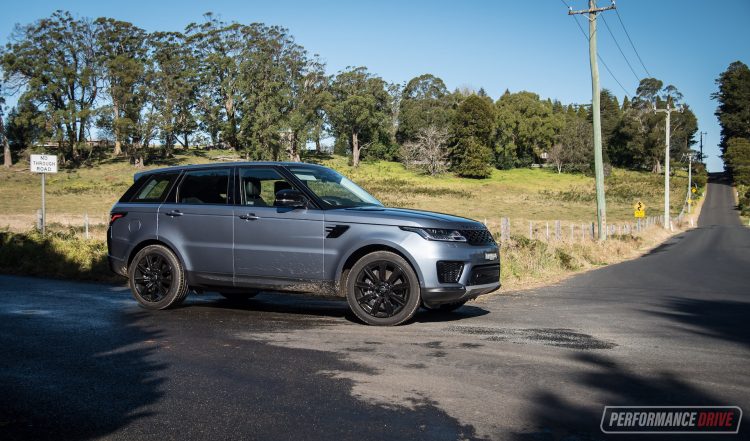 Aside from a discreetly blocked off section of the front grille, which houses the charging socket, the exterior of the P400e is exactly the same as the regular Sport. So that’s great. You still get the stately and gallant style but with eco-friendly aspirations.

Here we’re testing the SE variant. One of just two P400e options available in Australia – the other being the flagship HSE. Prices start from $133,677 for the SE (excluding on-roads). That puts it in a similar price bracket as the SDV6 version (soon to be superseded by an inline-six for MY2021). 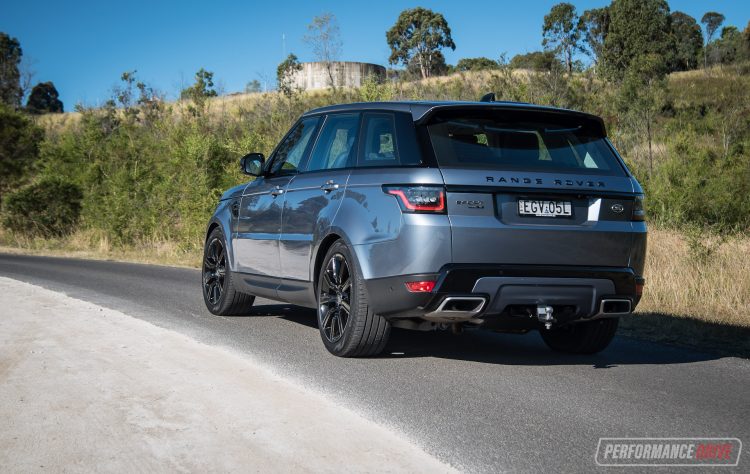 This example shows of the must-have black pack, which includes a black roof, black window surrounds and side mirrors, and black grilles and other trimmings. It looks stunning. And we love this Byron Blue colour option as well. It goes very nicely with the black highlights. Topping off the exterior is a set of 21-inch alloy wheels, in black. Interestingly, Land Rover Australia decided to show off one of the off-road-style tyre options available with this test car, even for the 21-inch rim.

Underneath you’ll find a standard height-adjustable air suspension system, which is great to see on the base SE variant (entry level for the P400e anyway). At the touch of a button you can raise or lower the vehicle. It seems like such a basic thing but having this at your finger tips really enhances the overall versatility of the Sport. Lower it down and you have a refined and very cool evening car. Raise it up and it’ll tackle off-road terrain like a pro. 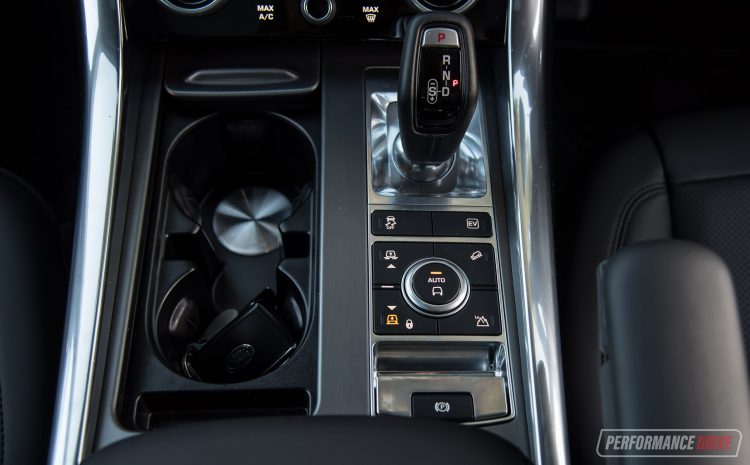 If you thought the exterior was enchanting, the interior is even more alluring. Check out the dual touch-screens (called Touch Pro Duo) which flow elegantly down from the dash. The lower one incorporates all of the vehicle settings and Terrain Response 2 drive modes, while the top one is for the media and communication. We love that these screens are blended seamlessly into the dash design. And we adore the lower rotary dials with their see-through centres and changing displays. 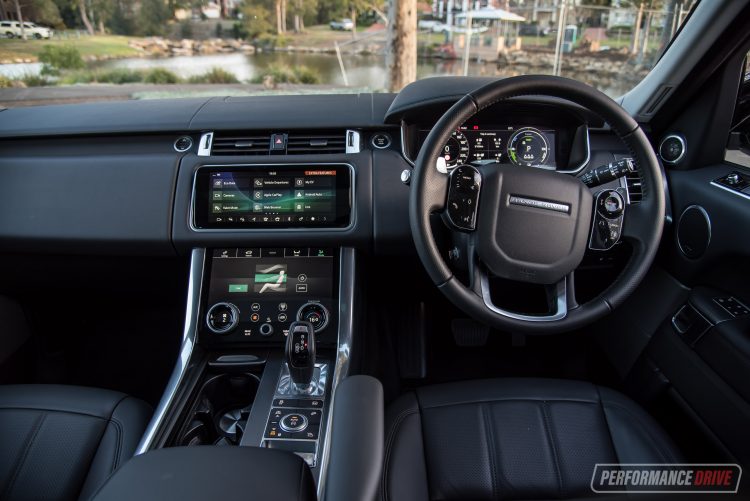 Front passengers are treated to armchairs. And we really mean arm chairs. There’s a flip down arm rest – with adjustable positioning – so you can sit back and relax like you’re the king of the road. It feels so good.  Headroom and legroom is of course no issue for a vehicle in this segment, and with the suspension automatically lowering down during its ‘access height’ setting, it’s really easy to get in and out. 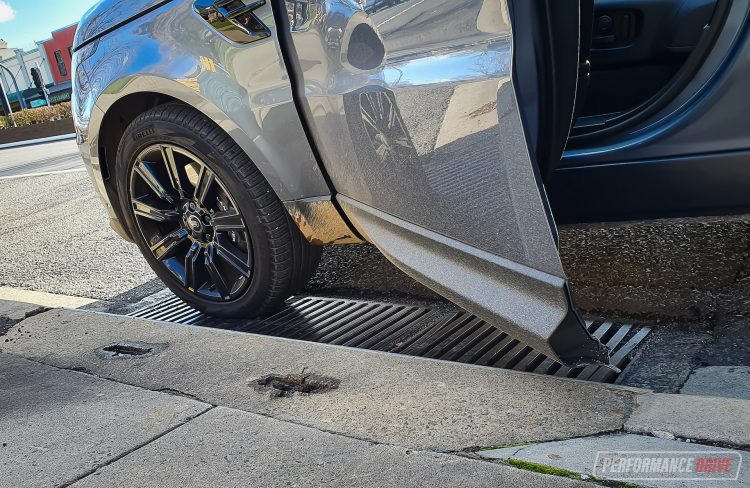 Range Rover was one of the pioneers of extended door panels. These are there so your pants or legs don’t brush against what could be a dirty sill. If there is one word of warning for these it’s that you sometimes need to be careful when parking alongside kerbs, as the access height system can lower the body quite close to the footpath.

Rear seat accommodation is also very impressive. There’s seat heating on this example, climate vents and multiple charging ports, a big flip-down centre console with cup holders, and lots of headroom and legroom. It’s super comfortable back here. You can even recline the backrest and enjoy a royal-like journey similar to the front passengers. Unlike some rivals, even the middle seat is comfortable thanks to a flat floor. 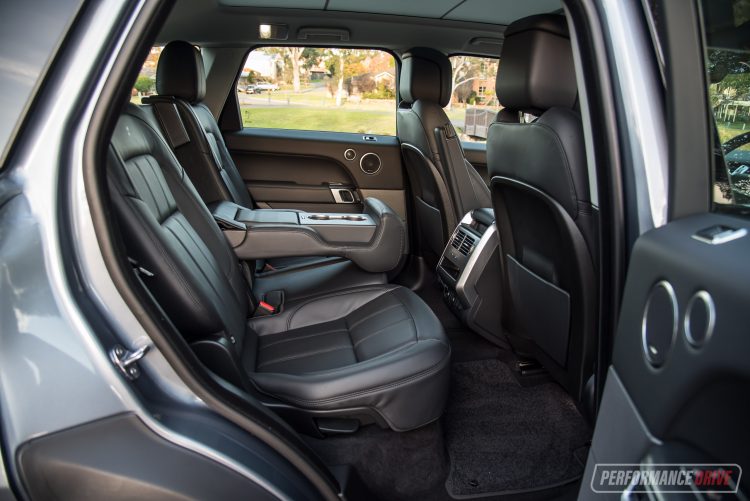 Boot space is rated at 446 litres in the default seating setting. That’s down from 522 litres in the non-hybrid model. Flip down the rear seats and that opens up to 1686L. A power socket and load height adjustment is available from the back for added convenience.

The Range Rover Sport is one of the most confidence-boosting, majestic, and empowering SUVs to drive. It feels so good to be driving one. It’s no wonder these are a hit with celebrities and VIPs. Nothing compares. Even if you roll up next to a Ferrari at the lights, you’ll often get a nod of respect from the driver. Everybody knows these are just the business when it comes to luxury SUV motoring.

Visibility is superb thanks to the relatively thin and clean-cut pillars – and traditionally big windows – and despite being almost two metres wide (1983mm) this big rig is pretty easy to park and navigate in tight city conditions. The ride quality, with air suspension cradling the cabin, is like riding on a cloud. Even the shoddiest of bitumen surfaces in the city are no challenge for the Range Rover. It irons over everything. There’s no doubt in our mind this is the most comfortable ride of any luxury SUV in this specific class. 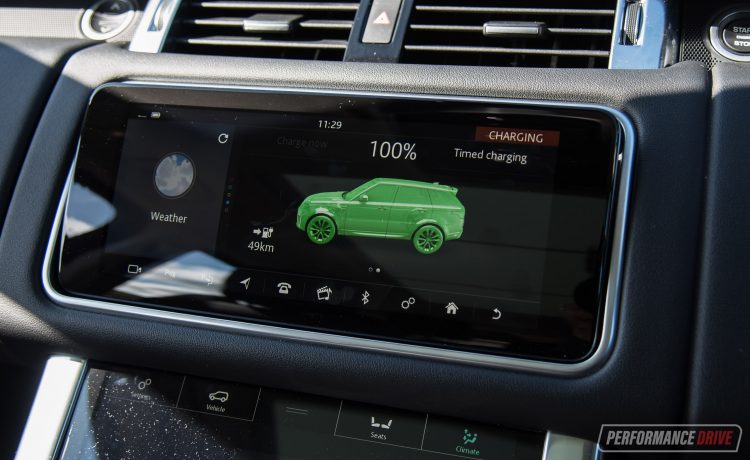 So, what about that new hybrid powertrain? Well it comprises of the 2.0-litre turbo-petrol four-cylinder engine from the Si4/P300 variant, which develops 221kW and 400Nm on its own. That’s paired with an electric motor that brings the outputs to an eyebrow-raising 297kW and 640Nm. This makes it more powerful than any other available engine in the Sport this side of the supercharged V8 options.

Even without the use of the electric motors, with the battery level at zero, this 2.0-litre turbo four-cylinder really is enough. Even with the hefty weight of 2415kg. All 400Nm from the petrol engine is available from just 1500rpm, which helps to provide immediate low-down response. The electric motor helps in this area too, making it quite a nimble and zippy powertrain around town. 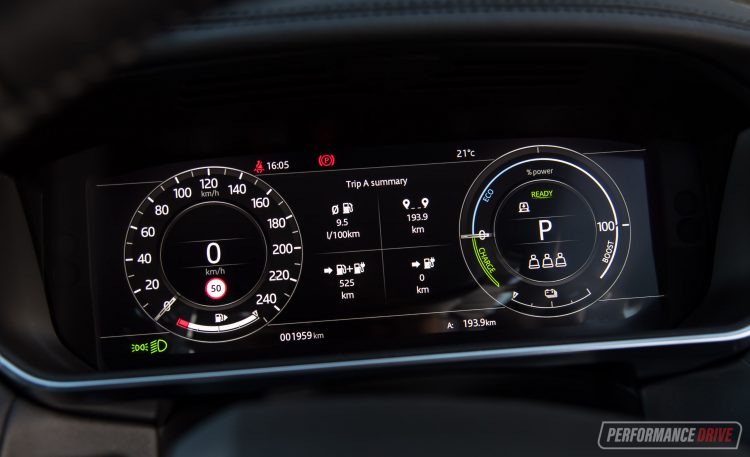 Top end power and speed is good as well. With all of that power combined, the Range Rover Sport P400e has no problem getting up to highway speeds, and can perform overtaking manoeuvres with confidence. We also find this eight-speed auto transmission calibration works nicely with the low-end torque, effortlessly surging through higher gears.

If you’re considering the P400e because you want pure economy and you’re attracted by the 2.8L/100km official fuel consumption average, we’d like to warn that you probably won’t achieve that figure in the real world. Yes, the powertrain does provide an electric-only range of 48km when the battery is fully charged. But during our test, we found the range display to be rather optimistic.

For example, we drove away from our home with a max 49km range showing, turned down a few streets and came to a set of traffic lights. The range said 39km. That was driving completely normal with no excess throttle, and literally about 3-4km away from home. Then getting on the highway, the range soon dropped to 31km, then 28km, and by that stage a feeling of range anxiety did sweep through. Fortunately, this is a hybrid and there’s no need to worry – it will continue to drive even when the battery is at 0%, thanks to the 2.0L petrol engine. 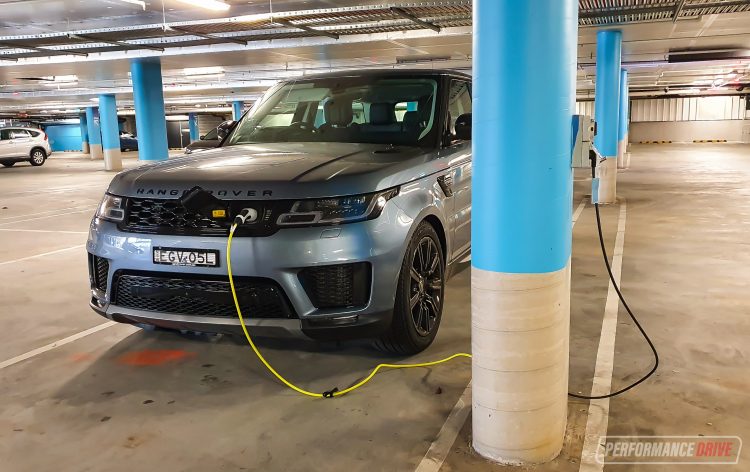 If you live in the city and you do only drive around 20-30km per day, the P400e package will definitely show some benefit. You could literally drive it every day and not use any petrol at all, given the right circumstances. Range Rover uses a Type 2 plug, but there is an on-board cable that allows you to plug it into a conventional household outlet. Although, doing that does require a lot of charging time. Around 10-12 hours from empty, in fact. If you’re buying this model though, you can of course have a faster charging system installed at your home, and then just trickle charge at the office when you can.

Our main criticism with charging is not necessarily Range Rover’s fault. It’s the number of different plug types manufacturers have come up with. Some public charging stations only support certain types, which we find extremely annoying. Again, this isn’t the car’s fault but the industry’s fault, and perhaps some blame can be directed at the Australian infrastructure/government. But even that, the government is probably just responding to and providing for the quite low volume of EVs out there at the moment. Other countries are far ahead, in terms of customer take-up and infrastructure support. 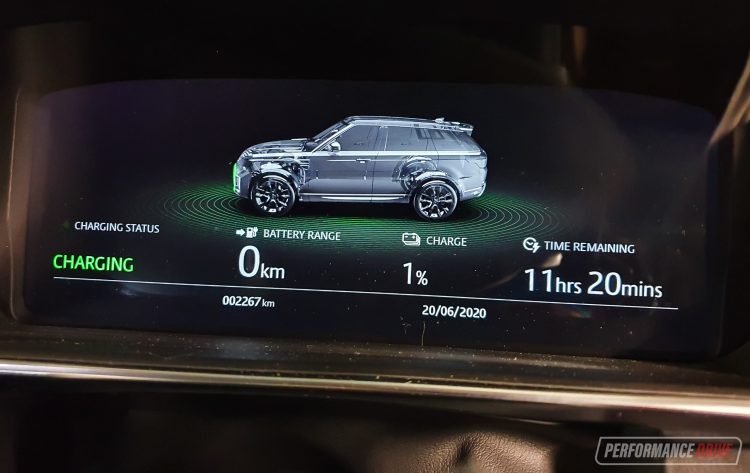 Drivers can choose between a plethora of driving modes, including an on-road Dynamic setting for sporty driving, or sand and rock crawl modes. As the P400e SE comes with the Terrain Response 2 package, it includes a two-speed transfer case with low-range, as well as an electronic active differential with brake-type torque vectoring. We have to admit, we only ventured onto some rough dirt roads during our test. But we get the sense there is more than enough capability here for any potential buyer in this class. And in that sense, we’d be confident in saying the Sport does offer the best off-road performance out of any of its main rivals.

The standard ground clearance is a pretty average 213mm. However, raise the suspension up and it expands to an impressive 278mm. In the raised position the Range Rover Sport can swim through water crossings as deep at 850mm, too. That’s more than some heavy-duty utes and ute-based SUVs currently on the market. 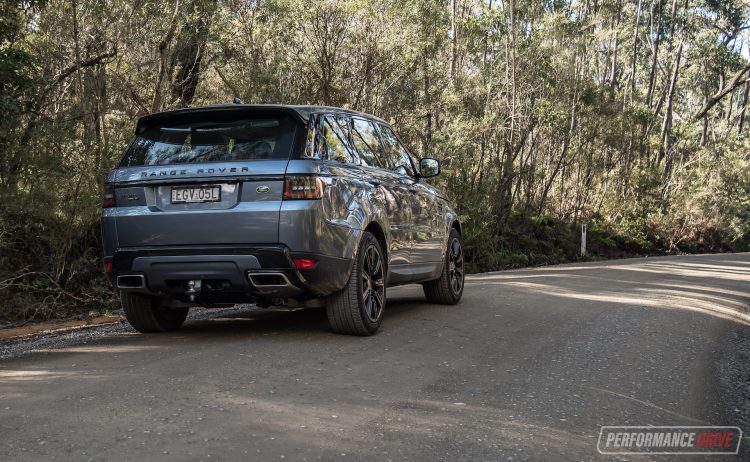 We don’t think you should dive into the P400e with your heart set on saving the Earth. Yes, the official fuel consumption is just 2.8L/100km. But like many hybrids on the market, this test-lab figure is far from what you’re likely to see in the real world. That is unless you’re driving in very specific conditions; drive under 30km per day and charge it every day.

For now, we reckon the turbo-diesel six-cylinder options are the pick. And with the all-new inline-six arriving soon, with up to 258kW and 700Nm, we think the widest variety of drivers out there will experience better economy than what this offers anyway.

As for the Range Rover Sport alone, it continues to be an endearing and thoroughly versatile large luxury SUV. It’s gorgeous to look at, inside and out, and really lovely to drive.