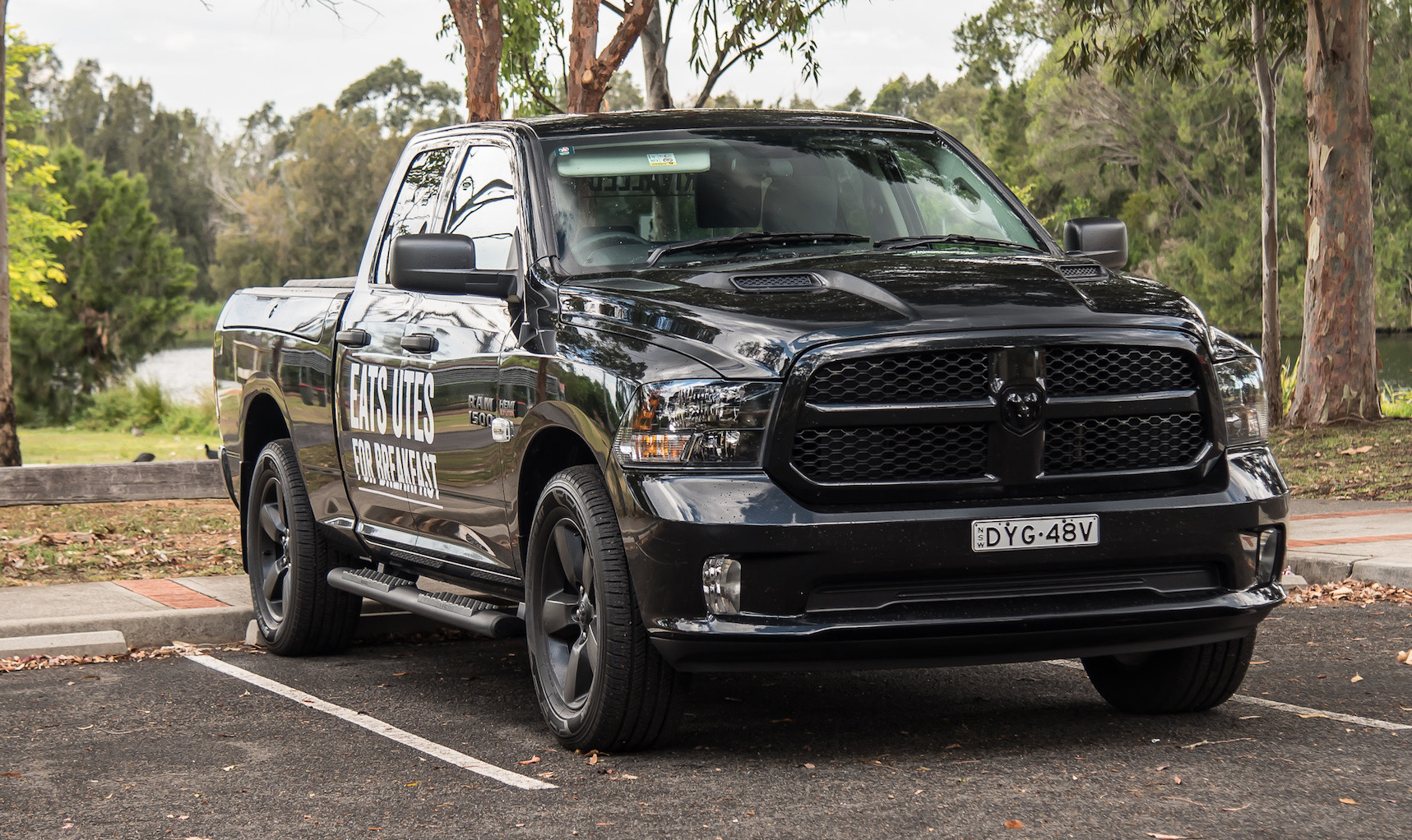 With a 5.7-litre HEMI V8, the 2019 RAM 1500 Express doesn’t just eat utes for breakfast, but lunch and dinner as well. It is the most powerful and quickest factory ute currently on the Aussie market. 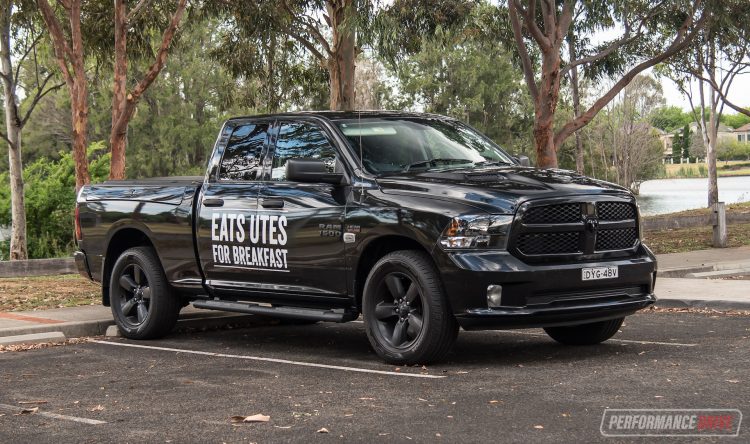 If you’re reading this in America or as an American, you might as well tune out now. Because these monstrous utes are the norm to you. But to us Australians, this is really exciting. It’s massive, for starters. And this 1500 version isn’t even the biggest available. In fact, it’s the smallest. Compared with the segment’s best-seller, the Toyota HiLux dual-cab, the RAM 1500 dwarfs its overall length by a whopping 487mm, and spreads 162mm wider. In other words, if sheer size is your top priority in a workhorse, look no further.

To give you some background, RAM pickups can be purchased new in Australia and are backed by a three-year/100,000km warranty. All models are shipped over from the USA and then converted to right-hand drive locally via a partnership deal with Walkinshaw Automotive Group and Ateco Automotive.

The local arm has invested over AU$10 million into the project recently, and this year the production facility in Melbourne is set to roll out around 3300 RAM trucks. Interestingly, the local hub is the only factory-authorised remanufacturing facility for RAM trucks in the world. The facility is also the only 24-hour vehicle production factory in the country. 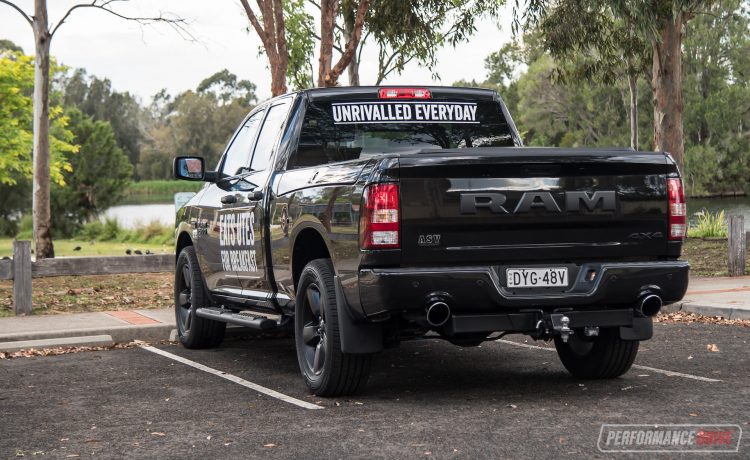 A range of body styles are available in America, from 1500, 2500, to the 3500. But in Australia we’re only offered the 1500 and 2500. There’s also Express and the more luxurious Laramie trim levels. Up until recently only the 5.7-litre V8 petrol engine was available. But now local buyers are offered a 3.0-litre turbo-diesel V6 – an engine that’s also seen in other Fiat-Chrysler vehicles such as the Jeep Grand Cherokee.

Here we’re testing the 1500 Express V8, with the optional Black Pack and the ‘RamBox’ storage system along the edges of the tray area. Prices start from a rather steep $84,450, plus $5000 for the Black Pack. This test car also features a gnarly sports exhaust option which adds $3267 to the bill.

It is expensive compared with the common diesel 4×4 utes, but with this you are literally getting a lot more vehicle for your money. And we suppose there is some justification in the fact that it does need to be converted from its original left-hand drive state. Needless to say though, there is nothing else quite like it on the Aussie car market. Not with petrol V8 power like this. 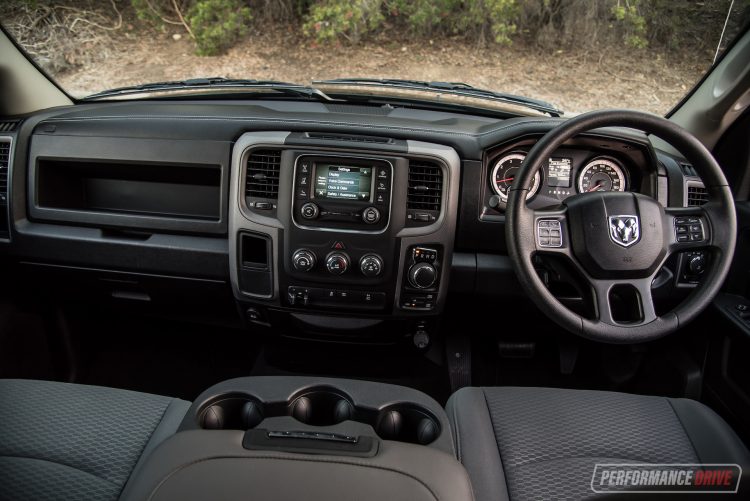 When we first approached this vehicle we couldn’t help but smile. We’re not particularly big fans of American muscle cars and pickup trucks, but there’s just something almost cartoonish about the RAM 1500’s size and presence that makes you grin. It engulfs your vision and commands your respect. This is even more so when you jump inside, because it’s massive in here, too.

Being the base model Express means the interior is fairly bland. And to be honest, some areas are pretty old-fashioned and even crude. Take a look at the dash, for example. It showcases a media touch-screen that’s smaller than most smartphones. There’s no Android Auto or Apple CarPlay, either, but it is available on the Laramie. Most of the controls, such as for the climate and even the rotary gear selector, lack any design finesse. 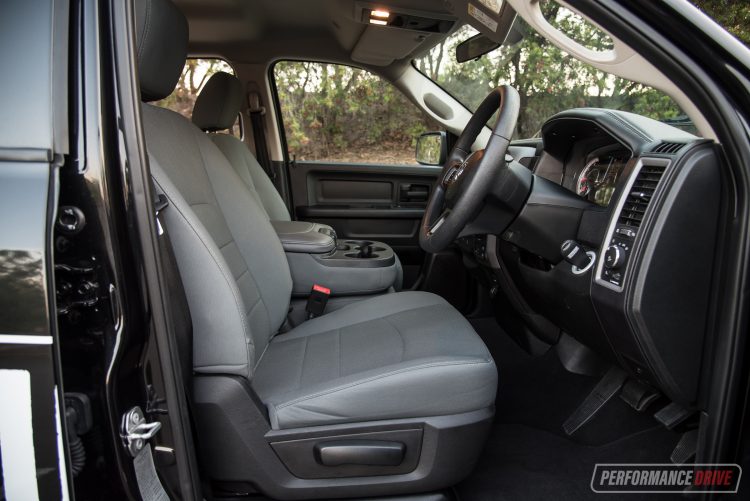 In saying that, this example, although new in Australia, was actually around in America back in 2013. So there’s a reason it looks a bit old; it is old. But new. If that makes sense. That doesn’t mean we don’t like the interior however. There are a lot of thoughtful snippets of practicality, such as a pull-out tray at the bottom of the dash fascia, three multi-size cup holders on the centre armrest, and plenty of storage options for your things.

What we like most though is the uncluttered layout. It’s a great everyday workhorse as the cabin doesn’t feel claustrophobic at all, which helps to make you feel less stressed no matter how busy your day might be. All of the controls are easy to reach and most are clearly marked so you know exactly what they do from first glance. 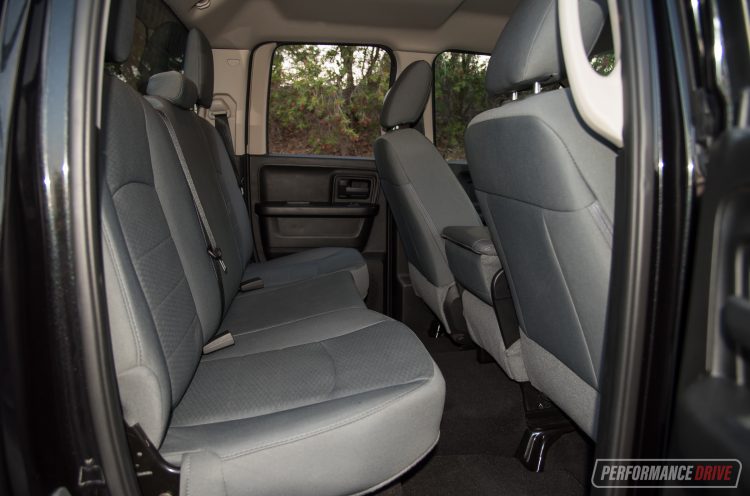 Passenger space in the front is very generous. And with no chunky centre console running down the middle, the sense of legroom seems boundless. We’re not a fan of the foot-operated park brake, mainly because it feels like you’re stepping on a carton of half-frozen custard each time you engage it. But, it obviously clears up space around wherever else it would be located.

Rear passengers aren’t treated to the same expansive vastness, unfortunately. This is strange considering the monumental exterior proportions. Legroom seems a bit tight and tall people will find it difficult to get really comfortable. Compared with the smaller diesel 4×4 utes, the RAM isn’t really any bigger in our opinion. Width-wise, yes. The shoulder room is impressive, but headroom and legroom are average. There are cup holders down on the floor in the middle, and only the Laramie gets rear climate vents. 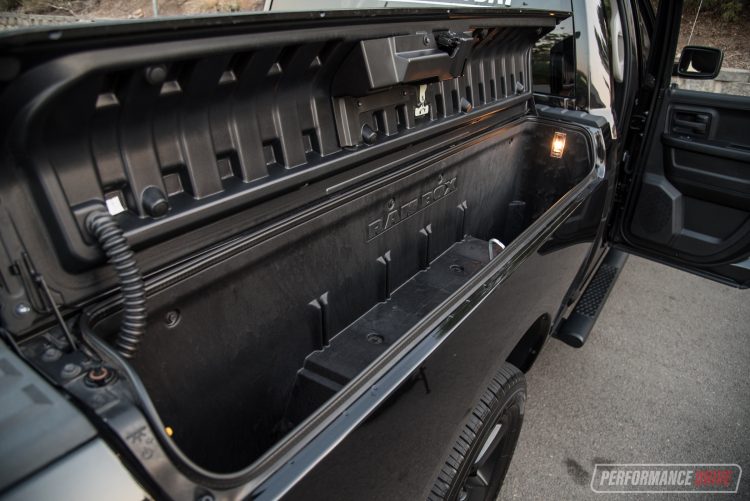 This body style is called RamBox. That’s because the walls of the tray area feature these clever storage containers. Why? Why not? Did we mention the 1500 is big? It’s so big there is leftover space in the sidewalls of the tub for Pete’s sake. These 243L boxes are lockable and provide deep pockets for additional loose items, such as tools, fishing gear, tie straps or tow bar attachments. Or, even a place for some ice and beers. They’re great. We love the little lights that automatically switch on when you open them, too. It’s evidence that RAM has done plenty of research and knows what a typical buyer of a workhorse needs.

As you’d expect, the tray area (tub) is also large. Across the bed floor it stretches 1.939 metres, with a width of 1.270m with the RamBox option. The tray width without the RamBox option is 1.687m, with 511mm of tub depth for either. Overall, the tub offers a volume of 1.6 cubic metres. If you need to carry a lot of stuff, regularly, you need to check out the RAM 1500. 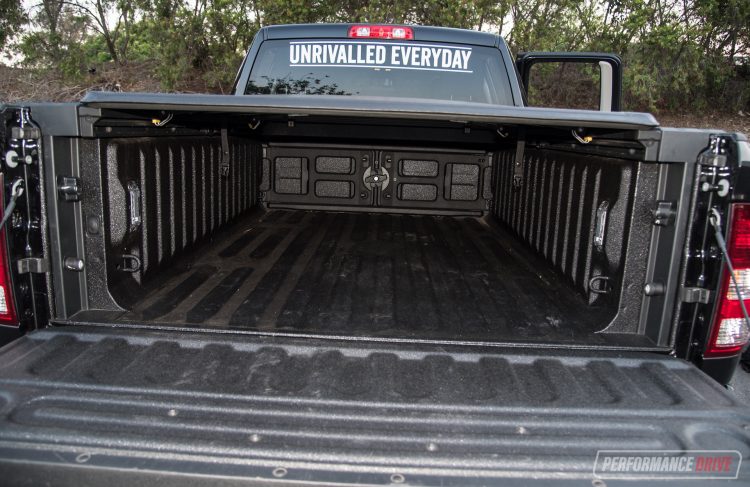 Helping in this area is the 1500’s ability to tow. With a braked trailer the official capacity is a whopping 4500kg, or 750kg unbraked. That tub in the back offers a payload of 845kg as well. The gross combination mass is 6261kg with the standard 3.21:1 final drive ratio, or 7237kg with the optional 3.92:1 ratio. With a kerb weight of 2605kg, it leaves 3656kg of total cargo-carrying capacity (including trailer), or 4632kg with the shorter diff ratio.

In terms of the overall build quality, you wouldn’t know this has been converted from left-hand drive. As mentioned, the interior is a bit old and lacks technology, mainly because it is an older design. However, the materials used and the fit and finish aren’t really any better or worse than some of the segment rivals.

Yes, the towing capacity is outstanding and the tub area is huge and very useful for working class folk. However, the powertrain is undoubtedly one of the star attractions. It’s a rumbling and growling 5.7-litre HEMI V8 petrol that effortlessly oozes out 291kW and 556Nm. Behind this is an eight-speed automatic transmission, with selectable rear-wheel drive and four-wheel drive, and high and low range.

This powertrain and the big teddy bear body and cabin are a perfect marriage. Given that kerb weight of 2.6 tonnes, it does need something with lots of grunt to get it moving. RAM has more than compensated for the weight, fortunately. So this actually goes pretty quick. On our usual private road we clocked a best 0-100km/h in 7.32 seconds. In cooler conditions (our test was at 29 degrees) and with less fuel in the 121L tank we reckon around 6.5 seconds would be possible. 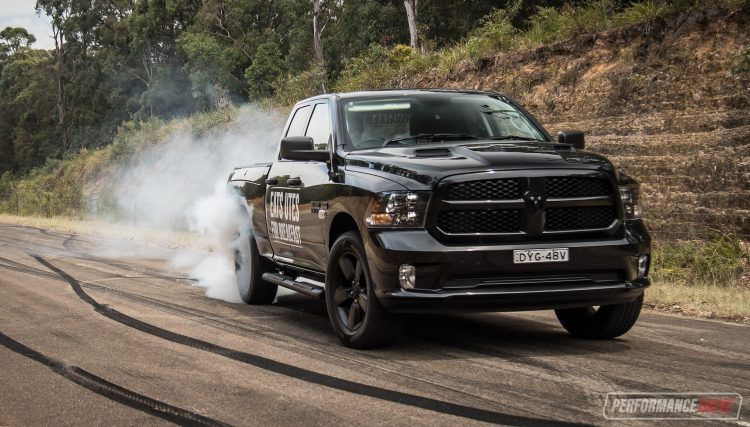 According to our performance testing of pretty much every dual-cab ute on the market, the RAM 1500 V8 is the quickest you can buy (as an official new vehicle with factory warranty). With 291kW on tap, it’s also the most powerful ute, especially since the Ford Falcon and Holden Commodore went out of production. In that sense, if you do long for a V8 with a tray at the back, again, the RAM is your answer.

In terms of the fuel consumption it is a thirsty beast, obviously. The official average rating is 12.2L/100km and we averaged around 18L/100km during our week-long test. RAM has developed a cylinder-cut technology for the HEMI, called Multi-Displacement System, which shuts down cylinders when cruising. Does it help? We can’t really test if it does but what we can say is, it is totally seamless. You won’t even know when cylinders are being shut down or when they fire back into life. 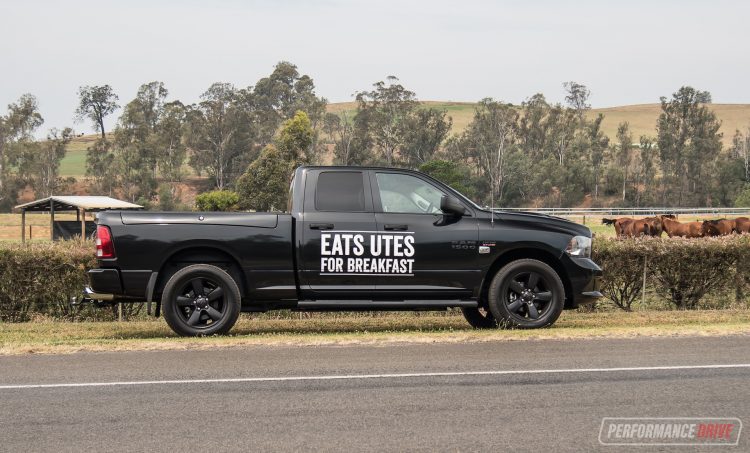 This is a big vehicle – we did mention that, didn’t we? So as you would expect cornering agility is not its forte. Having a good go through some vigorous bends proves it’s not as ponderous or as unpredictable as you might think. It gently leans into bends and holds a stance, with surprisingly high resistance to tyre squeal. The steering is light and quite reactive when needed, but awesome for highway cruising. There is adequate feedback as well, for this style of vehicle. In the end though it is not the most dynamic vehicle in this class when it comes to outright handling, but neither is it the least.

In the city it is a bit unnerving to drive. Really tight streets are simply too small for it, and most car parks are not long enough. In Australia, that is. We’re sure over in the US the infrastructure is designed to cater for these friendly giants. But here, you will have to make some sacrifices and add in some extra planning time for trips to really built-up areas. Again though, that engine is the ideal companion in such times of stress, as its grumbling beat can have a calming effect. 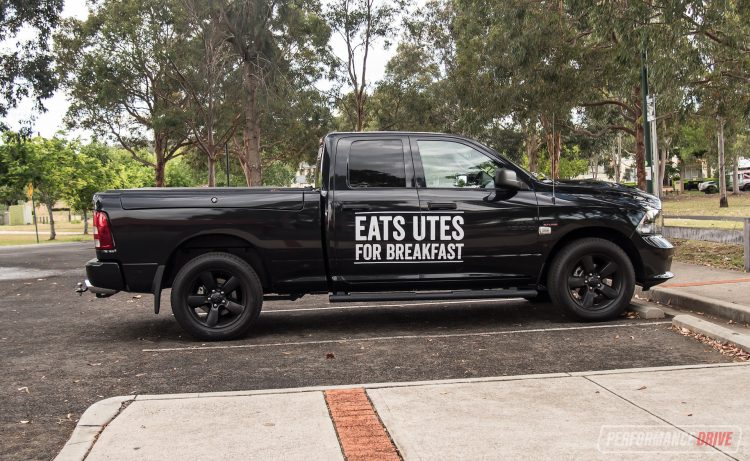 It has a loveable personality and an acute ability to put a smile on your face every time you get in. You know you’re bigger than everyone else and with that comes a certain sense of empowered superiority, but somehow not in a highbrow or pretentious way. And that V8 just rubs it in. It is so nice and smooth, and the performance is very respectable for this type of vehicle. Yep, we’ll have one please. In black.