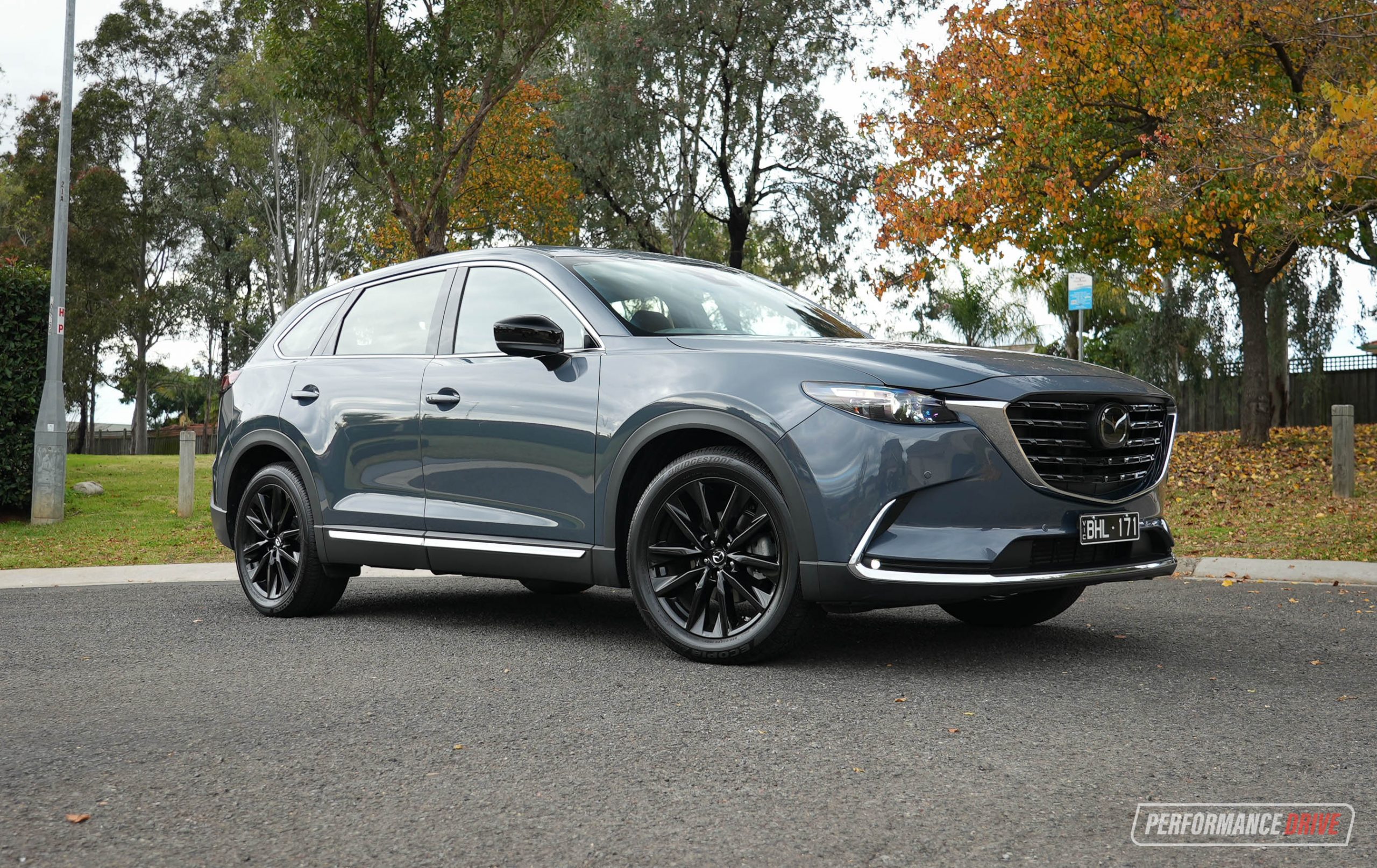 With 5696 sales so far this year (through October), the Mazda CX-9 remains one of the most popular large, 7-seat SUVs in Australia. But the current generation has been around now for over five years and with no major updates. Can the sporty new GT SP variant help reinvigorate the appeal? 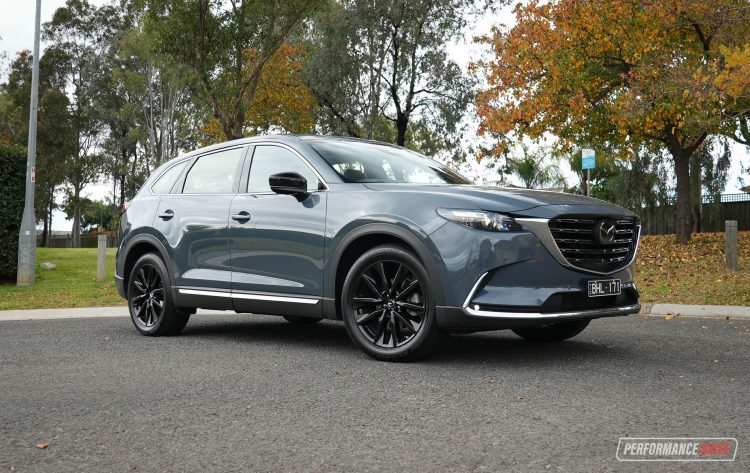 Yes, everyone loves a black pack exterior kit. Especially on SUVs. Mazda has been smart to jump onto the trending fashion with the introduction of the GT SP. New from 2021, this variant might promise sportiness and even a sliver of higher performance connotation, but in fact it is just a cosmetic makeover.

That shouldn’t matter though as many consumers already succumb to the alluring temptation of the CX-9 as it is. This pack should simply be a cherry on the top. Prices start from $63,490, which is only 500 bucks more than the regular GT on which it is based. It’s available in FWD and AWD. We’re testing the latter here, which starts from $67,490 – $4000 extra for AWD is quite steep.

* Figures based on previously tested 2019 CX-9 LE, as tested by PerformanceDrive on the day. Factory claims may be different 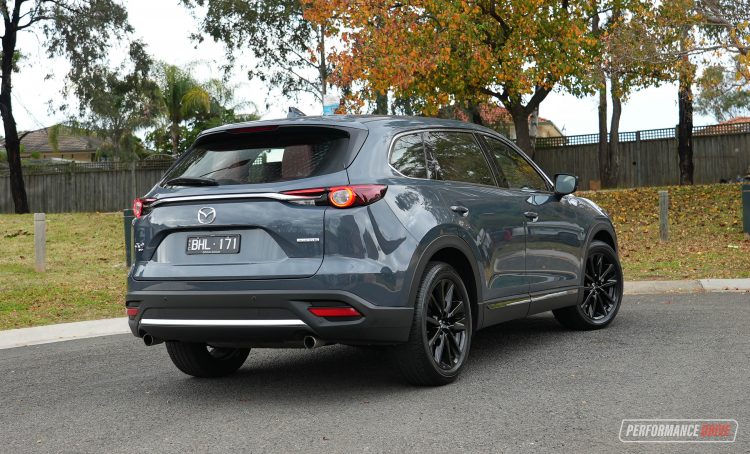 Mazda has been putting together splendid interiors lately, shrewdly edging itself closer and closer to the premium marques. And this rethink in philosophy of premium quality and refinement was actually kicked off around when the current-gen CX-9 was introduced.

It’s still a surprisingly lavish place inside, especially the upper variants such as the GT and GT SP. Mazda goes further with this too, offering a special Azami LE trim level that showcases quilted Nappa leather and captain chair seating for the second row. 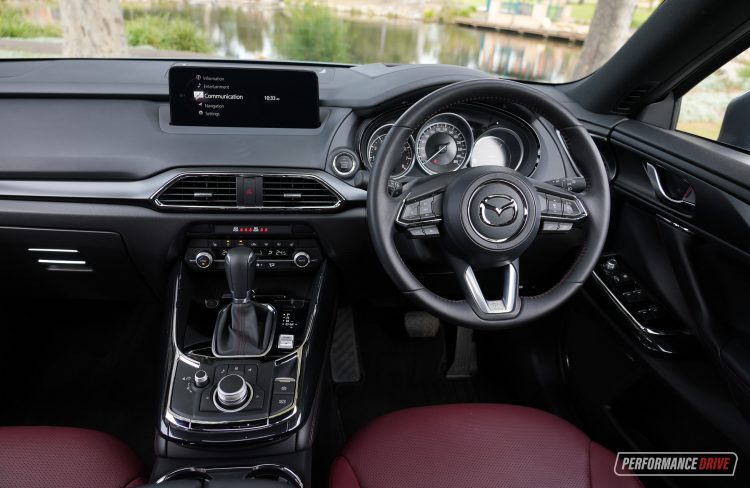 In the SP though you get soft leather-wrapped seats in a vibrant burgundy red, with ‘extended’ upholstery for the centre console and door trims with contrast red stitching, including for the steering wheel. It may not be as sporty as the SP badge suggests, but it is special enough to stand out and justify the $500 offset over the GT.

Passenger space remains very competitive in this class. The perched-up seating means it is easy to climb in and slide out, so it’s perfect for busy mums and dads on those busy weekend sporting errands. But it is also snug once you’re in thanks to a high centre console. It feels good behind the wheel, and the driving position is spot on. 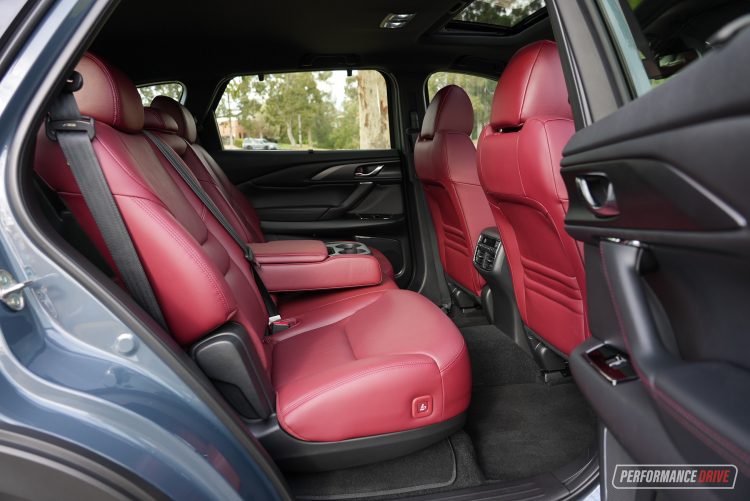 The middle row offers impressive room, particularly legroom, and the entire bench slides back and forth so you can prioritise space where you need it most. Rear climate vents, temperature control, and heated outer seats add to the overall all-family convenience and inclusion. Strangely, we couldn’t find charging ports in the second row but there are USB sockets in the third row. 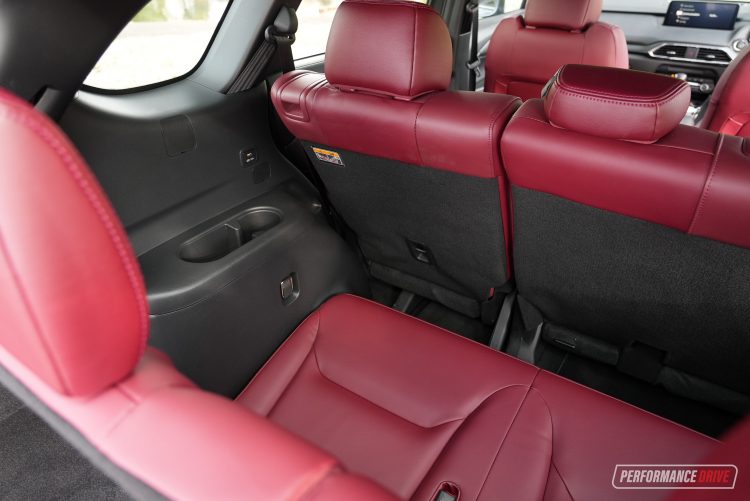 Speaking of which, the third row is accommodating enough to support adults so long as they aren’t taller than average. Longer trips are perhaps more of a concern for such individuals. Headroom is decent but legroom and foot space can feel pretty constricted. Not many rivals do much better in this department, except for the super-size models like the Hyundai Palisade and Nissan Patrol.

There is enough boot space leftover for light shopping or sporting gear with all three rows up. Officially, the volume is stamped at 230L, and there are some competitors that offer more in this configuration. Fold down the third row though and you have a whopping 810L to play with. That’s more than enough to take on a fortnightly shopping trip for a full family. 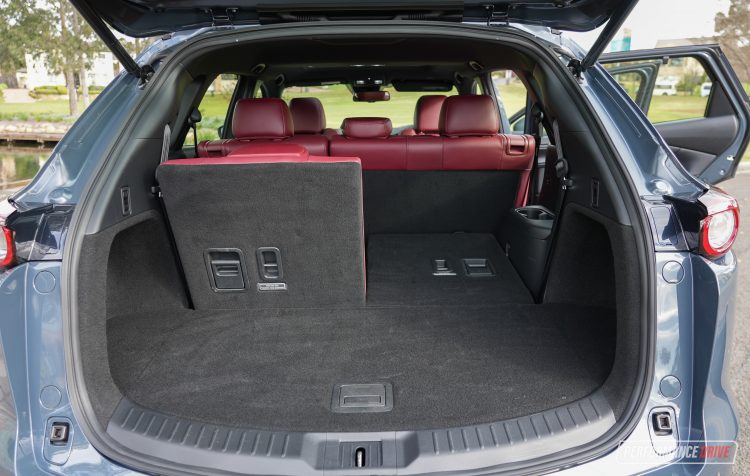 This 2.5-litre turbo-petrol four-cylinder engine was a great move initially, following the downsizing trends of the time. On paper it was a lot more economical than the V6 it replaced, and still now it offers one of the lowest official consumption rates for a large, petrol, seven-seat SUV, at 9.0L/100km.

However, dig a bit deeper though and you’ll soon realise many of the rivals are still using bigger-capacity V6 engines, presenting quite a lot more power. So the comparison is not completely fair. In the real world we averaged 11.2L/100km during our week in this. In our opinion, the consumption is reasonable but we can’t help but constantly look over at the turbo-diesel options also available in said rivals. 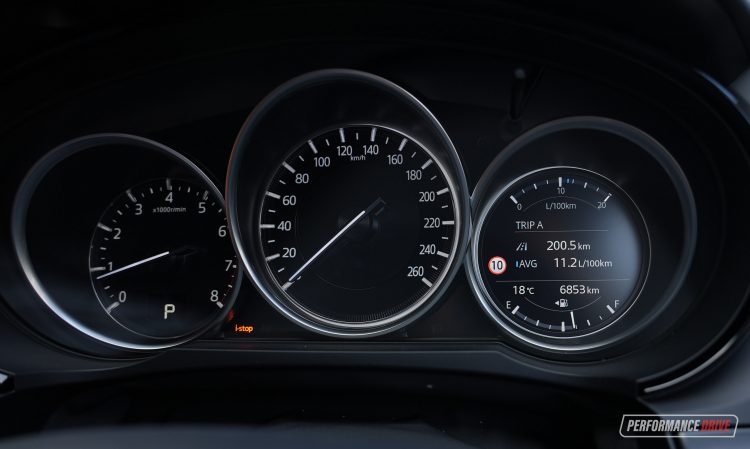 With a turbo-diesel, especially a modern one, you get torque. And that’s a more important figure to note. It’s the twisting force of the engine. The stuff that actually gets the car moving. And since this is a big car, with a kerb weight of 2010kg (without passengers), it’s always good to have plenty of torque.

The engine here offers 420Nm, which is respectable, for sure. Some of those aforementioned diesels develop around 440Nm. So this is not far off. However, we feel this six-speed auto does restrict the full potential as well. With more ratios we’d imagine a greater splicing of useable torque. But instead this tends to remain in, say, third gear and pull through. There isn’t much left in the bag, in other words.

If you really push it, it takes a big step down for the next gear and then you end up with some jerkiness. And it kind of seems like, to everyone else, you’re trying too hard. We think this overall process impacts fuel consumption, too. 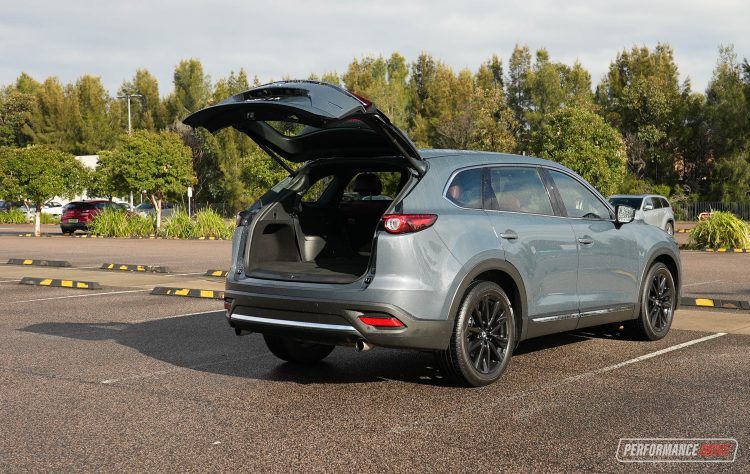 The CX-9 offers a pleasurable ride, with excellent suspension tuning that seems well suited to Australian conditions. It can soak up dodgy pot holes and changing bitumen surfaces with control and compression, yet it feels tight and responsive in the bends. This’ll help to reduce the likelihood of car sickness.

As far as handling and steering go, the CX-9 remains as one of the best all-rounders of the class in our opinion. It can feel a bit soft, with some body roll if you push too hard, but many key rivals are either equal to or less supportive of these demands. We really like the steering as it provides the ideal balance of weightiness, precision, and feedback, perhaps even surpassing the expectations of this style of vehicle.

Our main worry or consideration is that there is no real distinction between the SP and the standard GT. Perhaps there is scope for a unique suspension tune or slightly tuned engine? If it were the 1990s and Mazda introduced an SP variant, it’d have drastic changes over the regular variants.

Even the 20-inch wheels – albeit black-painted – feature the same size (255/50) tyres as the GT. Again though, you’re only having to pay an extra 500 chips so it’s unreasonable to expect more. 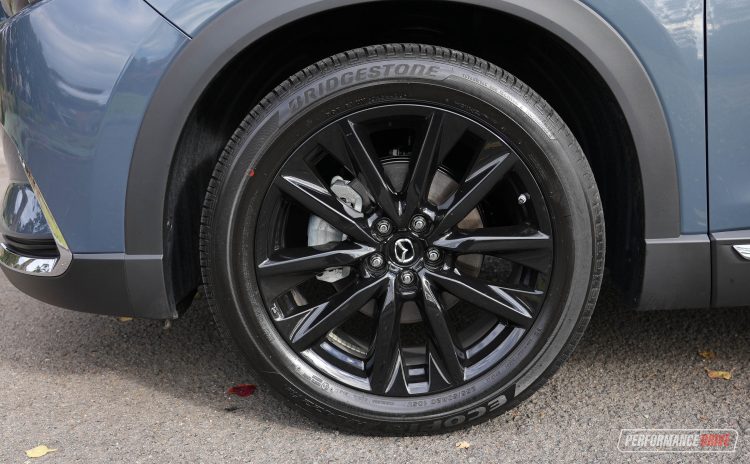 The CX-9 is still a surprisingly luxurious, really refined, highly practical and family-friendly seven-seat machine. While we were expecting more of Mazda’s sporty heritage with the SP badge, it’s hard to argue against the $500 premium over the regular GT. It’s a smart buy and definitely one worth looking very closely into if you’re in this space.

CONS:
– Thirsty by modern standards; no hybrid or diesel option
– 2000kg towing capacity is overshadowed by some rivals
– No surround-view parking camera
– It’d be nice to see more SP pedigree in here