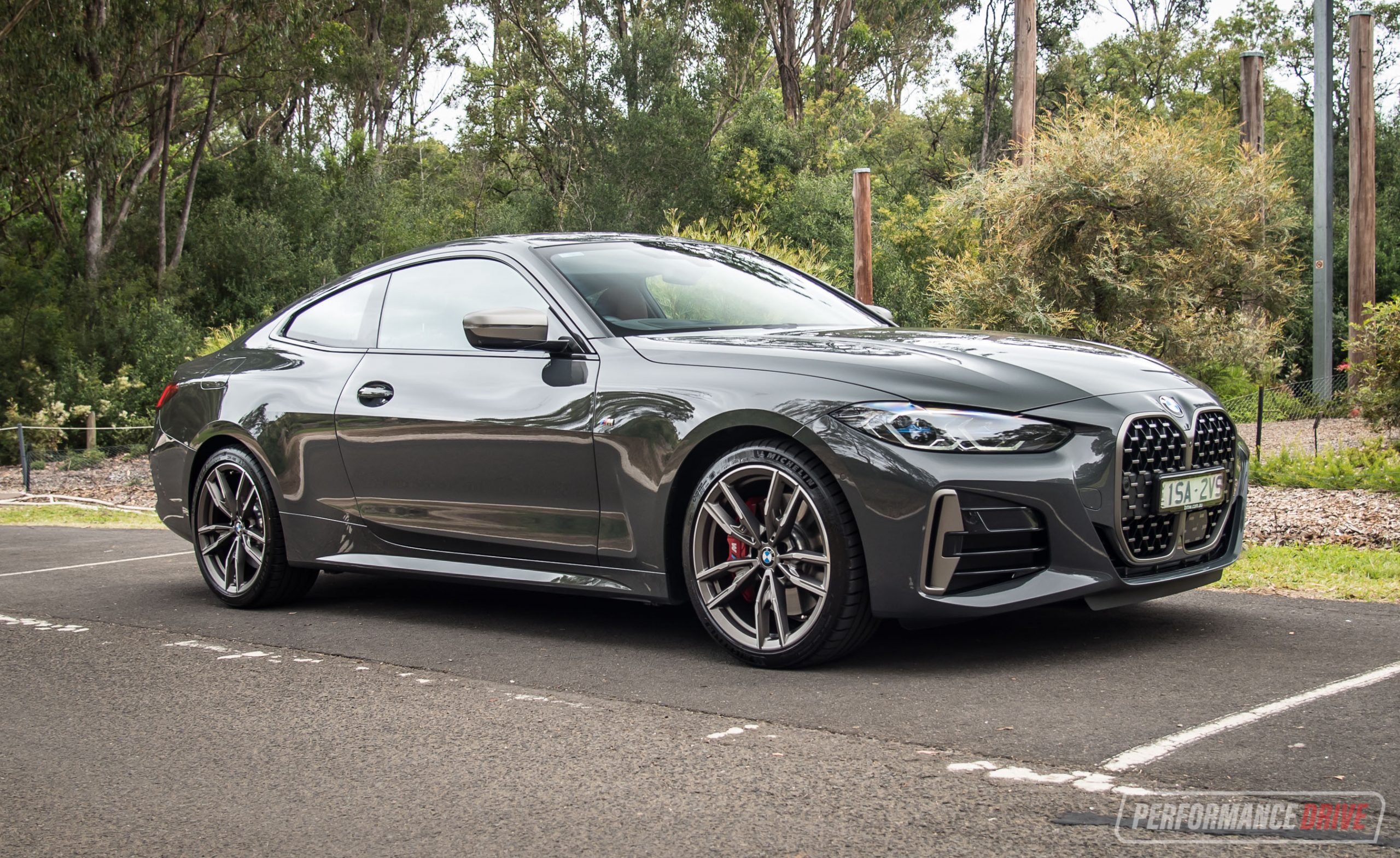 Unlike the M340i xDrive sedan, the new 2021 BMW M440i is not a sleeper. How can you expect to fly under the radar with these front grilles? If the design team’s mission was to make a bold statement with the new 4 Series, they’ve succeeded. 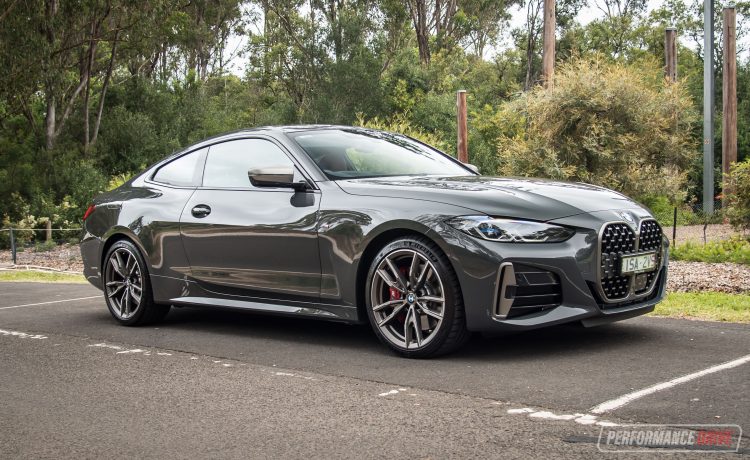 Okay, now that we’ve dished out the obligatory ridicule for the new-look front end, can we just get on with the rest of the car? Because this is a big deal. It’s the new two-door 3 Series (now called 4 Series); a model line that has its roots spanning almost 50 years, since the E21 BMW 02 Series (which debuted as a coupe). In fact, you could say it established the refined, rear-wheel drive sedan-based coupe segment.

Here we’re testing the flagship example, called the M440i xDrive. It features a sweet inline-six engine, all-wheel drive, and all the gadgets and gizmos you’d expect on a top-line luxury mid-sizer. Prices start from a rather northern $118,900 (excluding on-roads), which is quite a step up from the previous top-notch 4 Series; the $103,200 440i coupe, although, it was rear-wheel drive and came with fewer luxuries and so on. 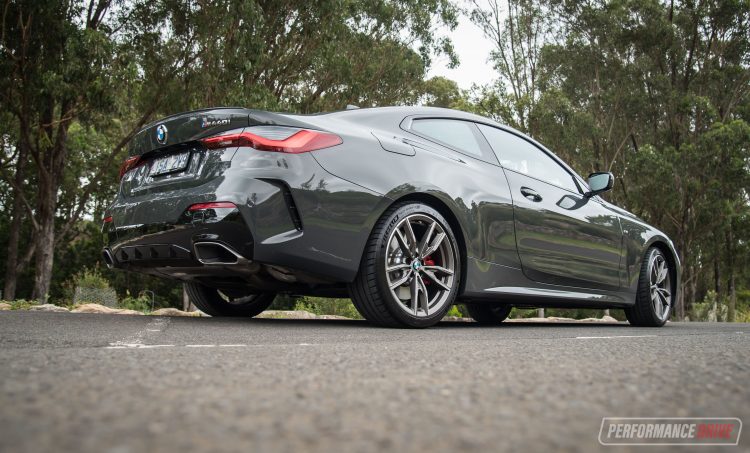 We might as well start with the design. Yes, we can already hear you complaining about the grille. It’s supposed to be a modernised take on classics such as the 1930s BMW 328 Coupe, and the iconic 3.0 CS from the 1970s. While the link is a fairly exaggerated one, the grilles here are functional and provide massive cooling mouths for the engine and its components. Check out the walk-through video on the new M3/M4 detailing the intricacies of the new front end.

Here, they feature active shutters that open and close to prioritise cooling or efficiency, whatever is needed for the current situation. Moving beyond the front end the new 4 Series is as elegant as ever. The side profile shows off its smooth sweeping curves and roofline, with nicely bolstered wheel arches hinting at the serious driving credentials. 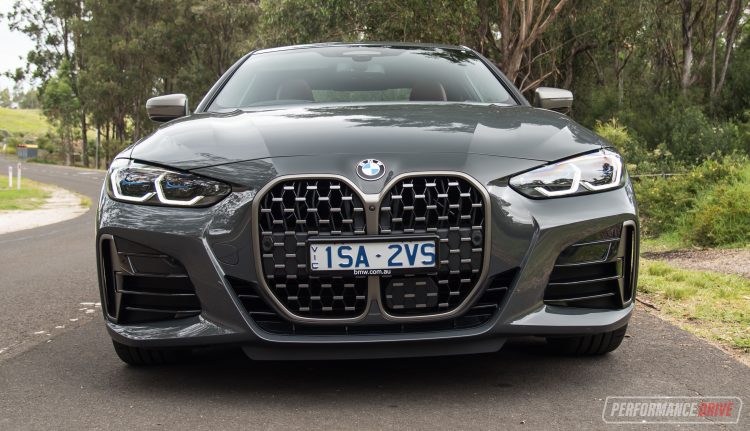 It’s all underpinned by BMW’s CLAR platform. The 4 Series is one of the last rear-drive-based models to make the switch to this modern architecture. Only the 2 Series coupe/convertible is left. With this platform comes a huge array of benefits, from increased passenger space, improved safety, technology, efficiency, and driving dynamics.

The dimensions are enlarged, too. The overall length is extended by 130mm over the predecessor, with 27mm in added width, and 41mm merged into the wheelbase. The front and rear tracks are widened by 28mm and 18mm, respectively, and the rear track is 23mm wider than the latest 3 Series that shares the same platform. Speaking of which, the centre of gravity on the 4 Series is 21mm lower than the 3 Series. This means even more focused and capable handling. 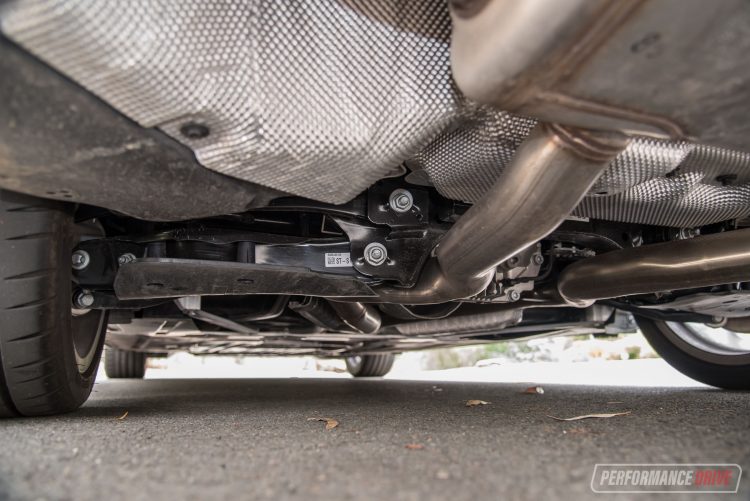 What does all of this mean inside? Well, the interior is definitely more spacious and liveable. This isn’t a specialist sports car that you need to make sacrifices for. Front passengers are cradled in lovely M Sport seats that offer a wide range of electronic adjustment, including side bolster adjustment, while the driving position is highly configurable so you can really settle in.

Rear seat space is very respectable for this class, with standard climate vents and temp control, and even a flip-down centre arm rest and storage pockets in the wall. Boot space is down only 40L compared with the 3 Series sedan. With 440L (coincidence?) the M440i could quite easily be used as a daily driver, suitable for a single-child family or couple. However, volume is down 5L compared with the old 440i. 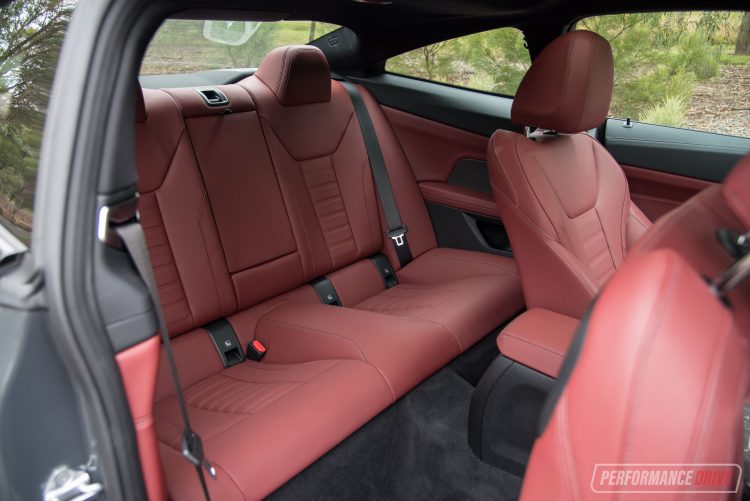 As for the on-board tech, BMW has infused its latest 7.0 operating system into the 4 Series, incorporating a 10.25-inch main interface with touch control, and a fully digital 12.3-inch instrument cluster. We love the iDrive hand controller for the main screen. It’s just so easy to use and it reduces distraction by not having to reach up to press the screen.

In the M440i specifically, you get a 16-speaker premium sound system by Harman/Kardon, full surround-view parking cameras, while all variants come with digital radio, wireless phone charging, head-up display, and wireless Android Auto and Apple CarPlay. We like the quality feel of the controls, and the dash design and button placement is very ergonomic. Some additional configuration for the instrument cluster would be nice, like on M models. 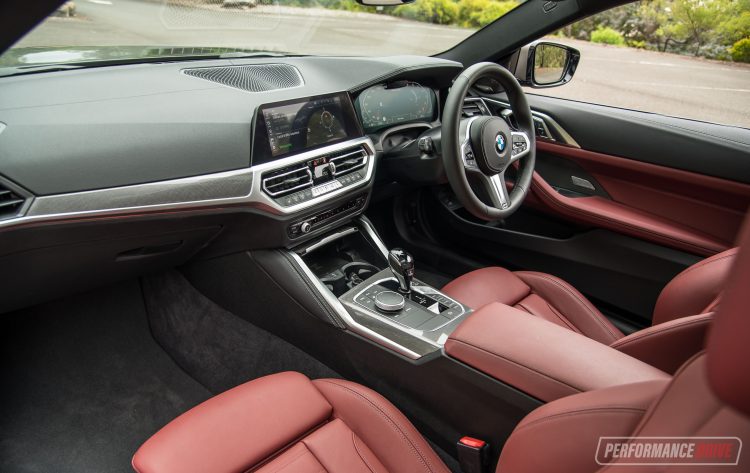 BMW knows has to make a great inline-six. After all, the first production engine it ever made was an inline-six; the BMW IIIa aircraft engine. And here we have yet another splendid example. Codenamed the B58, this 3.0-litre is so good even Toyota, the world’s biggest car manufacturer, was happy to put its badge on it – powering the GR Supra. Although, Toyota also put its badge on the VN Commodore-based Lexcen… 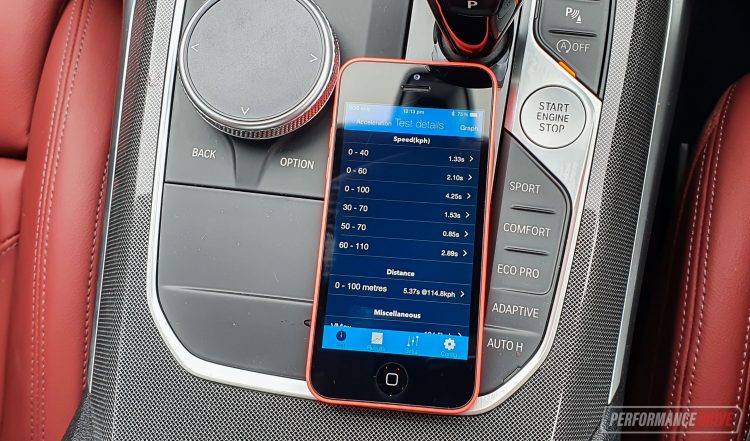 Making the most of these outputs is the almost faultless ZF-based eight-speed auto. We say almost faultless because, sometimes, it seems to read your every move so closely that it sometimes thinks before you have. For example, coming into a normal roundabout it’ll actually dip down a gear in anticipation of a speedy exit. However, in Comfort mode, sometimes you just want to cruise. This is hardly a negative though as many gearbox calibrations on the market today are tuned to remain in the highest gear possible for as long as possible. And that can get very frustrating.

Gearshifts are as smooth as silk yet, if you flick it into Sport or Sport+ mode, or use the paddle shifters, the shifts become extremely rapid. It’s easy to see why BMW M has begun using conventional autos for the latest M5 and M8, for example. There really is very little to complain about even in the hottest of moments. It just does what you want, when you want. 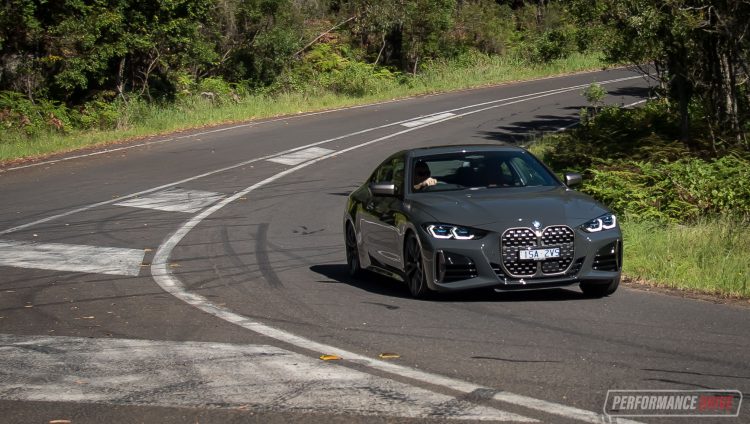 Around corners the M440i feels mostly neutral, and even slightly towards rear-wheel drive at anything under 80 per cent aggression. The all-wheel drive system does a brilliant job of getting all of that torque down to the ground nice and early, slingshotting you away from corners with much more control and speed than any previous flagship 3/4 Series coupe.

At anything above 80 per cent, you do start to experience very mild understeer. It’s only very mild and it does return to neutrality just past the apex with some power on. However, we can’t help but wonder if rear-wheel drive would fix this.

One of the best things about the handling is just the sheer confidence and control. There is no nervousness, even at the limit, and the steering, while not as organic as older BMW systems, provides excellent engagement and feedback. Grips levels are extremely high, too. BMW doesn’t usually stuff around with tyres, and here the very good Michelin Pilot Sport 4 S tyres are equipped, with staggered widths of 225/40 on the front and 255/35 on the back. 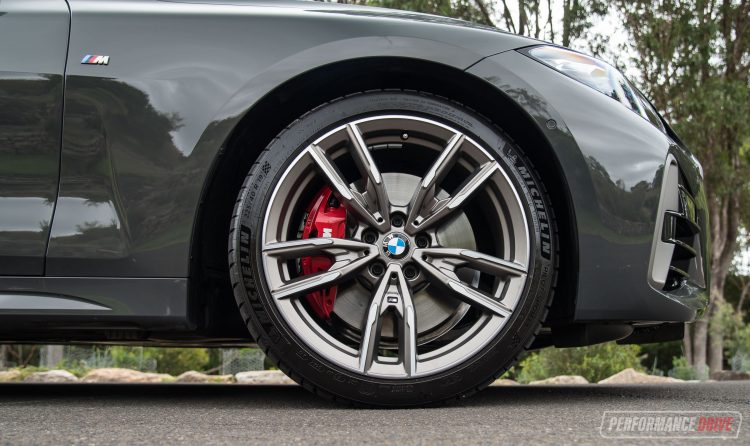 Adding to the confidence is the M Sport brakes, which you can apply at the last minute if you want to and they will instantly pull the car into line. As standard the calipers are painted in trademark M blue, but this test car shows off the optional red-painted items (no-cost option). We’d prefer the more subtle blue.

As a potential daily driver the M440i is gentle and well-mannered in traffic conditions. The suspension is firm but not overly rigid, considering this is the high performance variant. And you can sort yourself a custom driving mode, mixing and matching the different adjustable parameters to suit you. For example, you can have Sport for the engine but Comfort for the suspension. It’s a versatile package.

According to the official Australian specs, the average fuel consumption is 7.8L/100km. That’s a decent jump up from the old 240kW/450Nm 440i’s 6.8L/100km rating. However, that figure is from the older, less-realistic testing cycle. The old model was also rear-wheel drive and had a tare weight of 1517kg. This new model has become a bit of a fatty, weighing 1703kg (tare). Interestingly, the M340i xDrive sedan is 70kg lighter. During our week of testing, covering around 830km, we averaged 9.7L/100km. That’s not bad given the performance that’s on offer. 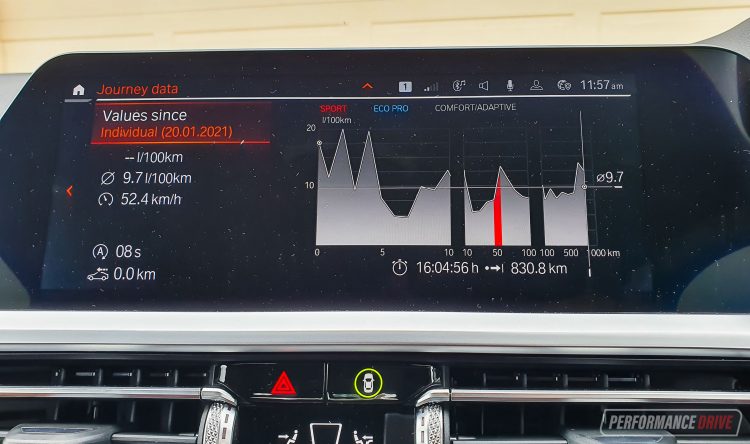