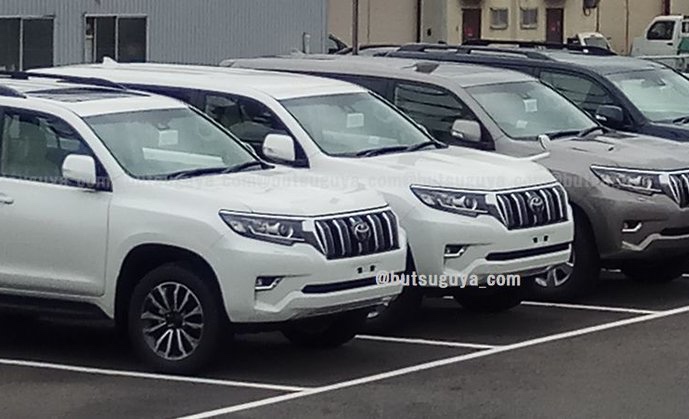 Toyota confirmed a couple of weeks ago that it will be unveiling the new model at the Frankfurt motor show this year, saying it will feature a “segment-unique body-on-frame construction”, unlike more and more rivals that are switching to a monocoque-style setup.

As far as we know the same powertrains will be carried across from the current model, including the still relatively new 2.8-litre turbo-diesel four-cylinder that develops 130kW and 450Nm. The 4.0-litre naturally aspirated V6, with 207kW, will probably carry over as well, although it might swap to the more efficient 3.5-litre which was recently revised to produce 218kW.

These examples here, spotted by Twitter user @butsuguya_com, look like they are sitting in a holding yard of some sort ready to be shipped off to their respective markets. In Toyota fashion, the new model will probably hit the market very soon after its official public debut, taking place on September 12.

Aside from the new-look front end incorporating more advanced headlights and LEDs, the 2018 Prado is set to come with a vastly updated interior and in particular a smartened up dash fascia. We’ve seen leaked images showing a neater stack for the climate controls, and a more advanced touch-screen system with separate audio controls.

Also part of the refreshment is expected to be the introduction of advanced driving assistance safety technologies, like autonomous emergency braking, radar cruise control, and pedestrian detection. These features should help it retain its five-star ANCAP rating next year when the scoring criteria gets tightened up.