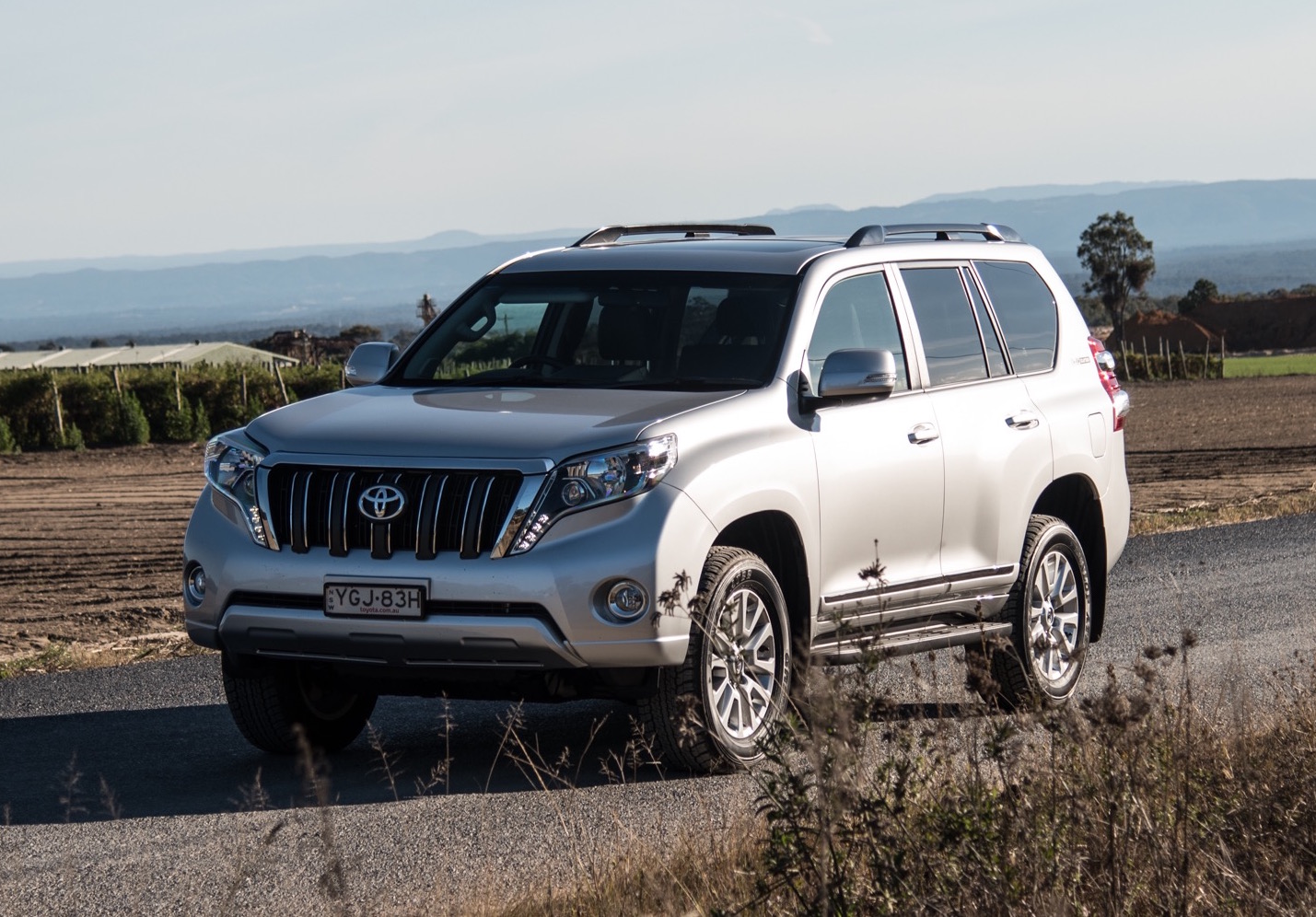 SUVs are fast-becoming the staple mode of transport for families, and the most staple of all is arguably the Toyota LandCruiser Prado. To help freshen its appeal Toyota Australia has introduced the Altitude special edition. 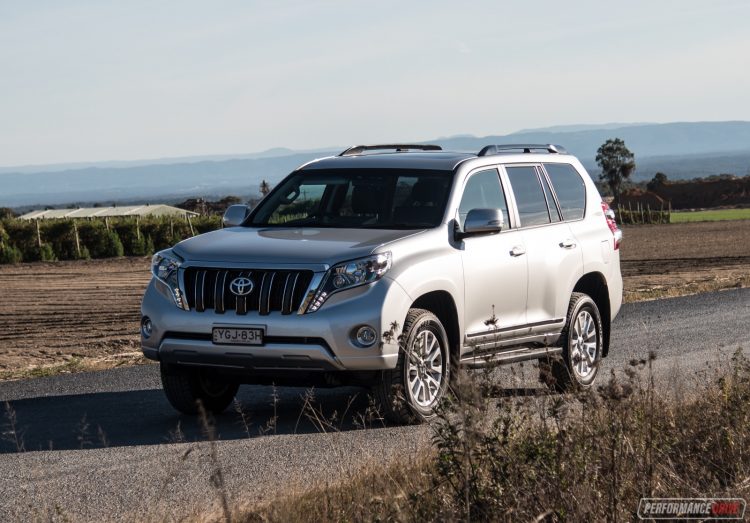 Toyota Australia is enjoying big sales this year, as usual, and the Prado is keeping the large SUV segment on its toes. So far this year (through July) the Prado is the best-seller in the class, posting 9874 sales. This is over 2000 sales above the nearest competitor, the Subaru Outback. Even more amazing, Prado sales are up a whopping 11.8 per cent year-to-date, despite constant onslaught from newer, smarter, and more attractive rivals all attacking for the same slice of pie.

To ensure the Prado remains at the top, the Altitude brings in around $10,000 worth of added extras for about $5000 more than the equivalent GXL on which it’s based. Prices start at a fairly steep $68,230, which places it at the upper end of the segment in terms of price. It’s available in six-speed automatic form only (manual available in some non-Altitude models). 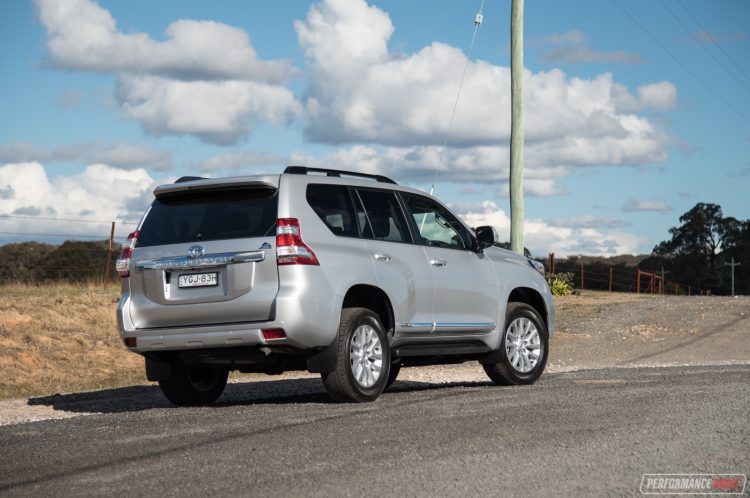 Based on the GXL, which is the mid-range variant, the Altitude comes with a decent array of standard creature comforts and luxury-inspired highlights. A leather upholstery adds a touch of prestige to the otherwise utilitarian cabin, while a 14-speaker JBL sound system improves in-car entertainment. Digital radio, USB and Bluetooth helps diversify playback options, while a 9.0-inch LCD screen flips down from the ceiling in the back to keep the kids happy. The screen can play DVD and Blu-ray, and has RCA ports for other gadgets.

Rear seat passengers in general are well catered for actually. Firstly, there’s a huge amount of legroom in the adjustable middle row, with headphone jacks (with three sets of headphones) and separate volume control left and right, along with a remote controller which is sure to get lost in the black hole down the sides of the seats at some point. There’s also separate climate control with airplane-style vents in the ceiling for the second and third row. The third row bench isn’t the largest in the class in terms of legroom, due to the floor running very close to the seat cushion, but there are neat cup holders on the sides and even a 220V/100W power outlet with the Australia three-prong socket. 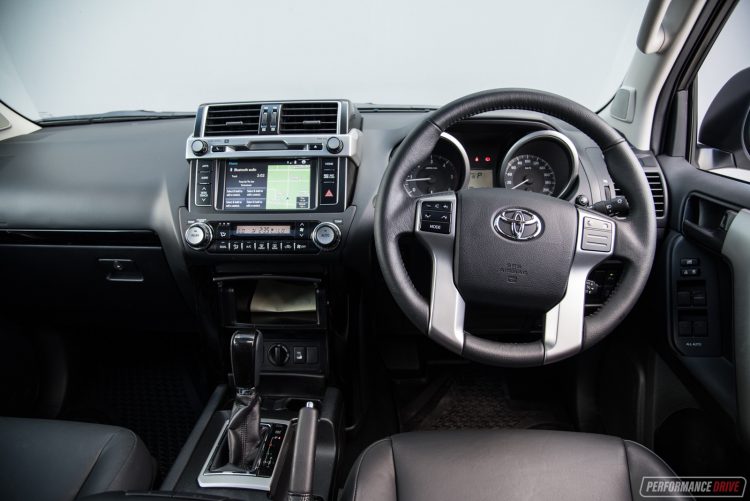 You can immediately tell Toyota has engineered the Prado for rugged use, whether it’s for families with multiple kids climbing all around the cabin, or for country folk in arid and remote areas where cleanliness and gentle use falls second-best to getting stuck into it and getting stuff done. You’ll notice the heavy-duty rubber floor mats that spread to the far corners of the floor to protect the carpet, and almost every flat surface features a dedicated step pad so you can pretty much walk your way around the cabin. We like this practical and robust attitude as it’s sure to be durable and wear well after years of use.

Up front though the driver and passenger are greeted with a rather bland but purposeful upright dash, complete with Toyota’s latest 7.0-inch touch-screen media interface. It comes packaged with sat-nav and tile-like apps. In our opinion Toyota still falls behind the market in terms of media interface functionality, graphics, and operation. However, it is quite easy to use, with big buttons and only the basics making it less fussy than some rivals, and perhaps more suited to a wider audience.

For the Altitude, Toyota has fit a side-swinging tailgate with an exclusive opening window section, with the spare wheel mounted under the rear end as opposed to on the tailgate. This does help when it comes to tight car parks and light shopping as you can simply pop things in the back without swinging the big heavy door right open. There is an infinitely-adjustable strut that holds the door open, even on steep hills, and we must say it is quite easy to operate. But the weight of the door is likely to become overwhelming for some, especially if the car is parked on an angle. 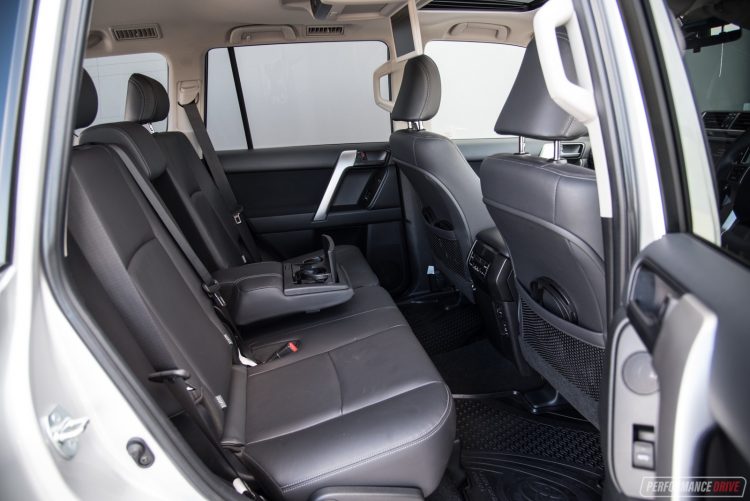 We haven’t driven the latest 2.8-litre diesel in the Prado since it was launched in 2015, but we’ve forgotten just how smooth and quiet it is. This is a great engine, emitting a consistent albeit subdued clatter at idle. Once it’s up and running it is surprisingly subtle. At highways speeds it purrs along, quieter than many rivals in our opinion. The noise is fairly low frequency and there is only one main tone, unlike some diesel rivals that produce all kinds of racket, high and low pitch. Toyota’s six-speed auto, built by Toyota-owned Aisin, is also suitably geared for the 2.8’s character and helps keep the revs at the sweet spot.

There has been some argument that the 2.8 is not powerful enough compared with the previous 3.0-litre model. In our opinion, and on paper, the new 2.8 is superior in almost every way. With 450Nm of torque available between 1600-2400rpm – against 410Nm between 1600-2800rpm of the 3.0 – you’ll quickly notice the difference here. Power is also higher, but by only 3kW, however, the engine feels freer-spinning and less prone to lag. Sheer overtaking grunt isn’t superb, but no seven-seat diesel SUV in this class offers anything near what could be categorised as superb. For all other duties, whether it’s around town or tackling short and steep ascents, the 2.8 is a great unit. Under full power we timed a best 0-100km/h of 12.04 seconds, which is about the median for this class.

On-road driving manners are a bit of a letdown in this class we think. There is noticeable dive under braking, even moderate braking, which can send kids’ drinks hurling, while body lean is evident around long sweeping bends. It can seem a little cumbersome threading through cringe-inducing inner-city streets, especially around tiny roundabouts, and the massive side mirrors can obscure some of your view in certain seating positions. The driver’s position isn’t all that natural either, in our opinion, but you do get used to it. 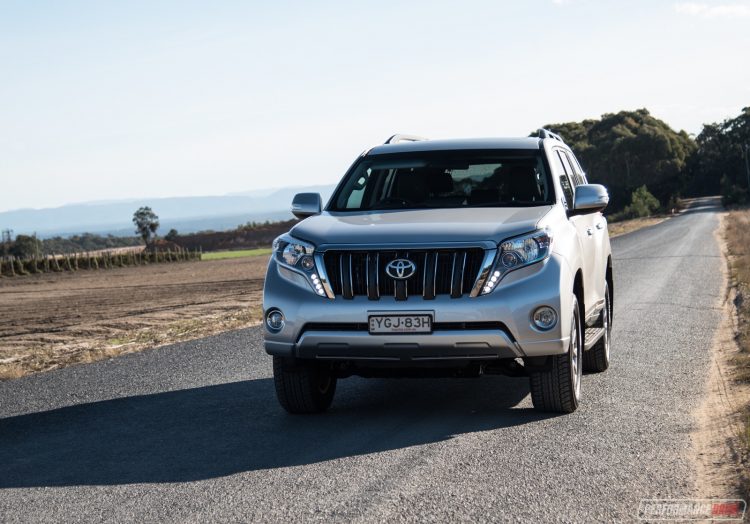 Motorists looking for a high-riding view will love the Prado. It has high-mounted seats and tall windows, and the cabin is actually quite a distance from the ground. In other words, this is an SUV where you’ll really use the side steps and grab handles. Like the interior, you can think of the Prado as like a durable leather RM Williams boot; it might not be the flashest design or the most charismatic or advanced, but it is very practical and tough, ready for real-world use.

This all gives you some clue of its off-road intensions and capabilities. While some rivals are definitely more compliant and more dynamic on the road, the Prado’s off-road skill is outstanding. As Toyota will be proud to tell you, it has over 50 years experience researching, testing and building vehicles that are designed to travel off road. Some of this testing is done right here in Australian conditions, too.

You’ve got a 32-degree approach angle and 25-degree departure, along with a 22-degree ramp-over angle and 220mm of ground clearance. Max water wading depth is 700mm. Underneath, there are various protective plates and well-concealed components which are ready to tackle fairly serious trails. A live axle rear end with five-link suspension, and an independent front end for comfort provides decent wheel travel (for a factory car), with the brake dive being a compromise to help with overall suspension flex. If you’re planning on going off road on a regular basis, the Prado remains one of the best-prepared vehicles to do that in, in this class. A limited-slip centre differential with a locking function, along with low-range, makes it almost unstoppable in extremely slippery conditions. 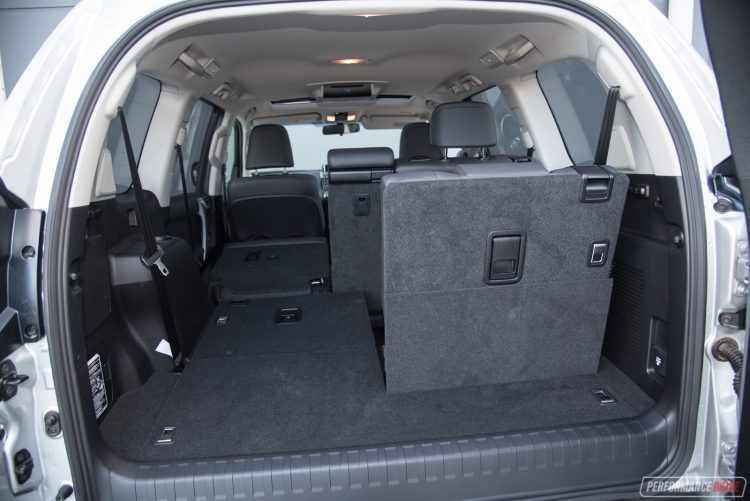 For families and outback motorists, the Toyota Prado will be most appreciated for its dependability, durability, and off-road confidence. It’s not the most elegant design in the class, inside or out, but the sheer practicality, size, and relevant creature comforts will be very attractive to most buyers looking in this class. Around town the Prado is a big, truck-like beast, and thus some rivals are more friendly to drive and easier to manoeuvre. Of course, none of the rivals offer a reliability history as successful as Toyota’s. If you’re thinking of buying a Prado GXL, the Altitude is obviously a no-brainer, adding near-Kakadu levels of luxury at a fraction of the cost.