Why does Australia always miss out on the fun stuff? Mazda Europe has just announced a new limited edition Karai Mazda MX-5 Special Edition Roadster Coupe for its local market. Not that this is the most exciting of special editions, the bright green Karai MX-5 at least breaks up the normal lineup a bit. 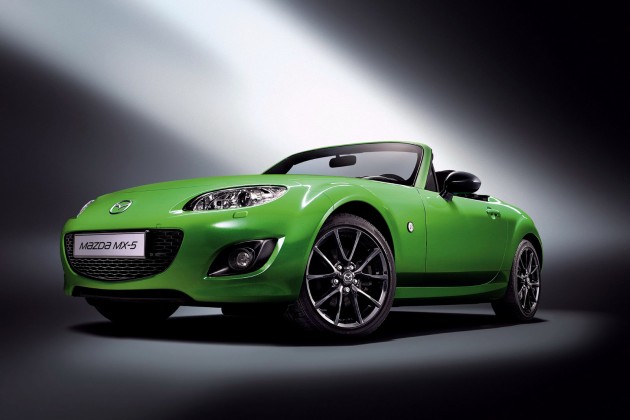 The car features a smattering of unique revisions. There’s the paint of course, which is called Metal Green Metallic, a new set of shadow chrome 17-inch wheels, and a gloss black folding roof and gloss black side mirrors to contrast that bright Kermit Frog paint. The green and black theme is also extended onto the headlight surrounds and front grille trimmings.

The interior of the Karai Special Edition is treated to a set of racy Recaro sports bucket seats – which makes you wonder why such seats are not available as an option on the standard model, especially with the MX-5’s natural ability to tear your face off in the bends. These items are trimmed in leather and soft Alcantara. Other interior touches include aluminium pedals, a leather-wrapped steering wheel and distinct gloss black details, replacing the usual silver items on the standard car.

So, has anything been tickled under the bonnet? Unfortunately Mazda has stuck with the trusty 2.0-litre naturally-aspirated four-cylinder unit which churns out 118kW (160hp). This isn’t such a bad thing though as it leaves the MX-5 with its perfect balance characteristics which have made it one of the most popular drop-top sports cars of the past 10-20 years.

Mazda is providing customers with the option of a sports package which upgrades the suspension for a lower more rigid compliance. Other unique stuff includes iPod/MP3 and USB-capable stereo system and a set of special edition floor mats.

Just 165 examples will go on sale, all of which will be sold in the German market for €30,000 (approx. AU$40,490). Price includes a special matching Sinn hand watch which is presented with green dials to match the car.

So okay, maybe the Australian market isn’t missing out on that much with this special edition. We’ll have to wait for the next-generation to debut, which is expected to happen sometime in 2013, after an unveiling possibly late next year. It’s anticipated to be a little ripper of a car.