Mercedes-Benz Australia has announced the Mercedes-Benz C 63 AMG Coupe Black Series price. The V8 coupe will hit the market in April 2012, offering vast cosmetic, chassis and engine revisions over the standard C 63 AMG Coupe; however, it does come with a $90,000 premium. 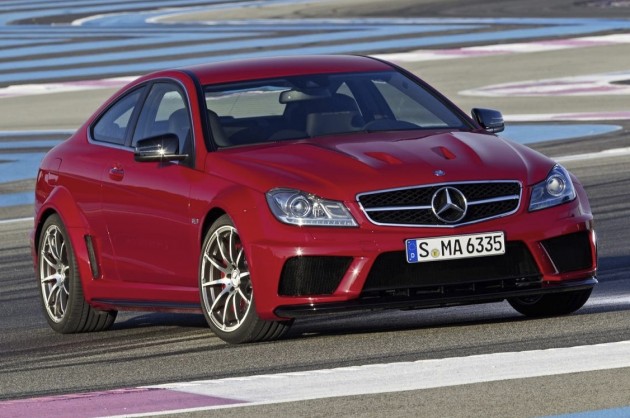 The first aspects you’ll notice on the Black Series are the intense muscles pumped out from the body. There’s bulging front and rear wheel arches, an angry carbon fibre rear diffuser and an equally eager front spoiler arrangement.

Under the bonnet sits a 6.2-litre naturally aspirated V8 producing 380kW of power and 620Nm of torque; enough to propel the Coupe from 0-100km/h in 4.2 seconds.

Other performance features include track-focused lowered suspension, an AMG locking differential at the back, and a race-inspired interior with two bucket seats and plenty of soft Alcantara.

“The C 63 AMG Coupe Black Series will be limited to a total of 35 units for Australia and New Zealand. Obviously we wanted to get more but, the global customer demand for this latest Black Series has seen our allocation limited to just 35 units.

“Many CLK 63 AMG Black Series owners see the C63 AMG Coupe Black Series as the logical successor and we already have a double figure order bank.”

So there you have it. Only 32 are headed for the showrooms, with many orders already placed; better be quick if you want to snag one of these bad boys.