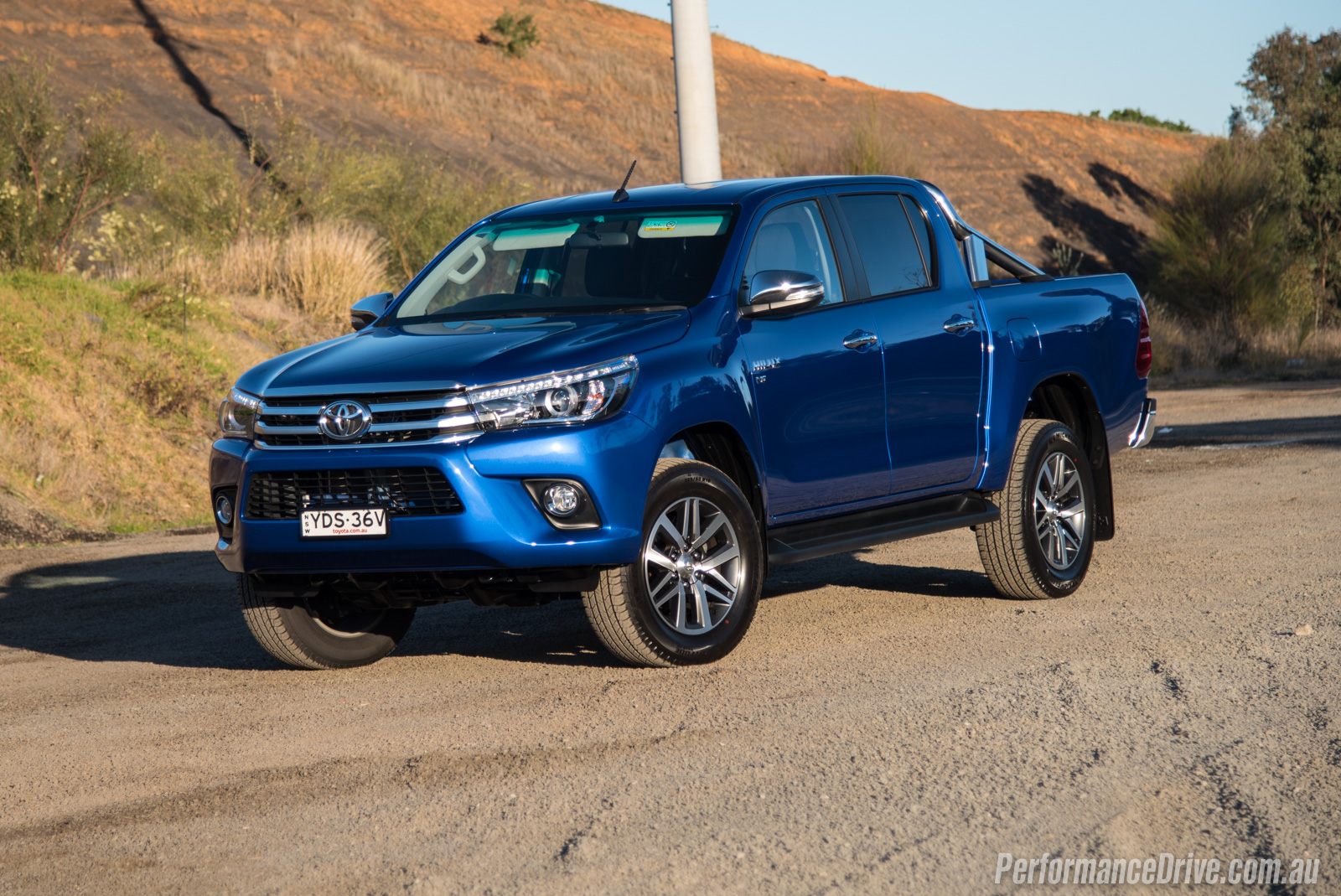 It’s not the most popular engine option but the 2016 Toyota HiLux V6 is the most powerful petrol 4×4 ute in the class (excluding American imports). Does this make it more appealing than the 2.8 turbo-diesel? We’re testing the top SR5 dual-cab 4×4 to find out. 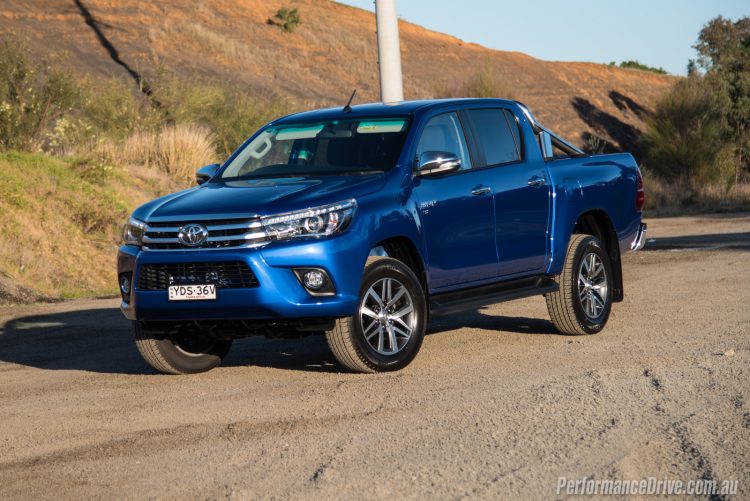 Toyota Australia offers 31 different variant and body style combinations of the new HiLux, and despite seeming complicated it does mean there is likely to be an option to meet your needs. Both automatic and manual is available, however, the V6 comes in auto form only.

Prices for this top SR5 dual-cab start at $55,990, making it one of the dearest options around. Although, most top-variant utes in this 4×4 segment are priced similarly high, and some are even more expensive.

We tested the dual-cab chassis with the diesel late last year, so this test is mainly going to concentrate on the V6 and its viability. Click here for our more in-depth HiLux review including off-road test. 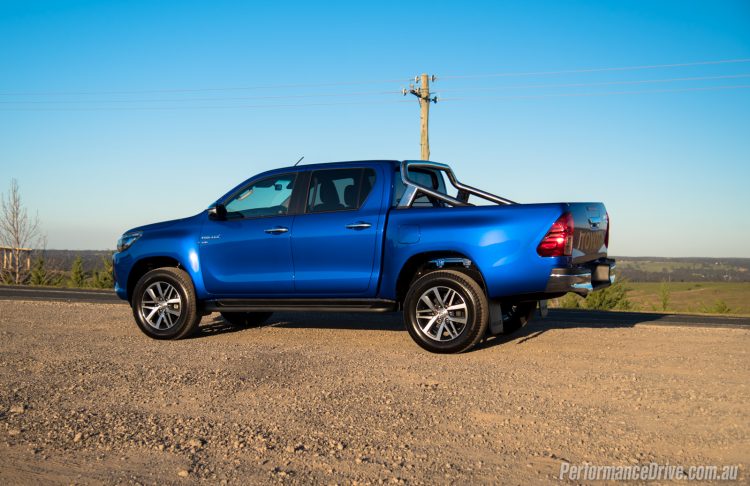 For the latest generation HiLux Toyota has spruced up the interior. There’s a more sophisticated and modern dash design meshing in with appealing door trims, and a fresh “high grade” seat upholstery. Every surface feels tough, although almost everything is hard plastic, including the top of the dash which is cleverly moulded to appear like stitched leather. It is all broken up into multiple tones and plastic textures though, with silver highlights making it, overall, one of the nicer cabin designs in this segment we think.

Despite being the top SR5 model it is alarming to see six button blanks to the right of the steering wheel. Some of the buttons are carried over from previous generations too, such as the rear diff lock and cruise control switches, and this does seem to bring down the crispness of the decor. Functionality is good, with most of the on-board entertainment housed within the smart new touch-screen interface. The 7.0-inch interface comes packaged with digital radio and Pandora apps as standard, along with sat-nav, a rear-view camera, and full Bluetooth integration with voice command functionality. 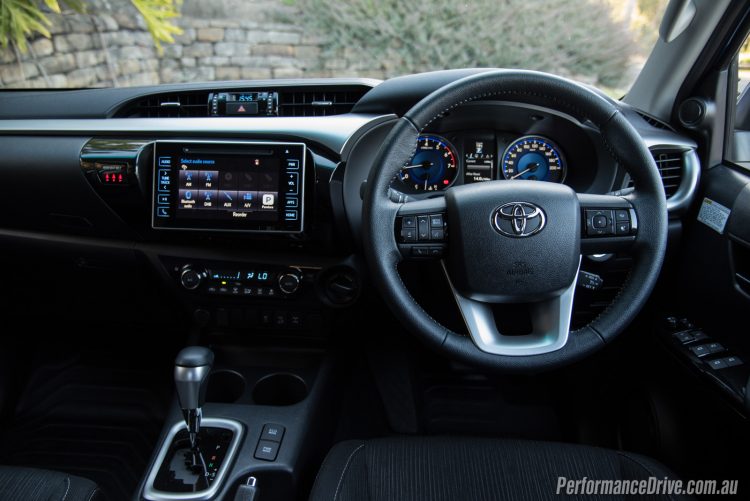 In terms of accommodation, we think the new HiLux sits about average in the segment. Front seat space is great with a well-forward dash making it airy and easy to move about. We did find it difficult to find the perfect driving position, but the steering column can be adjusted for both rake and reach. As for the rear bench seat, it provides decent headroom but legroom can be hindered if the front passengers are tall.

There are no rear climate vents in the back like on some rivals but there is a handy flip-down centre armrest with two cup holders, and bottle holders in the doors. As a bonus, all power windows feature an auto up/down switch – we’ve never understood why some carmakers make this functionality only available for the driver’s window. There’s also an air-conditioned centre console box large enough for two 600ml bottles, and neat carry bag hooks in the backs of the front seats for added practicality.

Going for this dual-cab body style tray gets you a 1000kg payload capacity. The tray measures 1569mm lengthwise along the floor, and 1645mm wide (widest point). It’s also 481mm deep and the loading floor stands 861mm from the ground. All of these dimensions are greater than what was offered on the previous dual-cab model, except the loading height is now 4mm lower to the ground. Strangely, the petrol dual-cab offers a braked towing capacity of 3000kg while the diesel auto is rated at 3200kg. Only the manual diesel sits at the segment benchmark 3500kg. 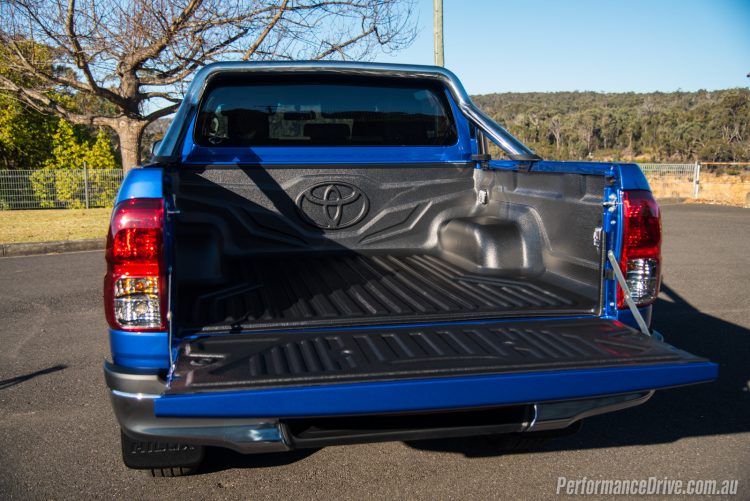 Opting for the V6 auto makes the HiLux a noticeably smoother and quieter drive compared with the diesel. The fact that not many rivals are offered with a high-powered petrol like this does give the HiLux a level of advantage. Out on the highway the V6 just cruises along with no real effort, and it is responsive and powerful.

Unfortunately, the latest HiLux does miss out on the most potent version of the ‘1GR-FE’ V6. Toyota fans will be quick to point out this 175kW version isn’t at the same 200kW level as the one fitted in the FJ Cruiser and Aurion. And actually it’s less powerful than very early iterations of this engine fitted in old Prado models, which offered 179kW (less torque, higher fuel consumption).

Does it really matter? Well, performance is surprisingly lethargic. There’s plenty of low-down grunt which quickly moves the ‘Lux off the mark, but top end isn’t all that impressive. We timed 0-100km/h in 9.14 seconds, which is quicker than most of the diesel offerings, but we don’t think the performance benefit is really worth it.

Fuel consumption is very high, recording 12L/100km on the official combined cycle. We tried hard and saw our average get down to 11.6L/100km. But we don’t think all that fuel use is worth the performance, especially with the figures being rather mediocre. Secondly, the new six-speed auto transmission tends to hesitate quite a lot and jump around gears, disrupting forward momentum somewhat. However, we’re not sure if this is common or just an isolated problem with this specific test vehicle.

As for the rest of the drive experience, the HiLux is a well-rounded package. Ride quality is a bit jiggly due to the leaf-sprung live axle rear end, but the steering isn’t exhaustive like in some rivals and overall handling and body control is very good for this class. In our opinion, the HiLux presents one of the best on-road driving manners for this class, nearing the VW Amarok and sitting close to the Ford Ranger/Mazda BT-50. 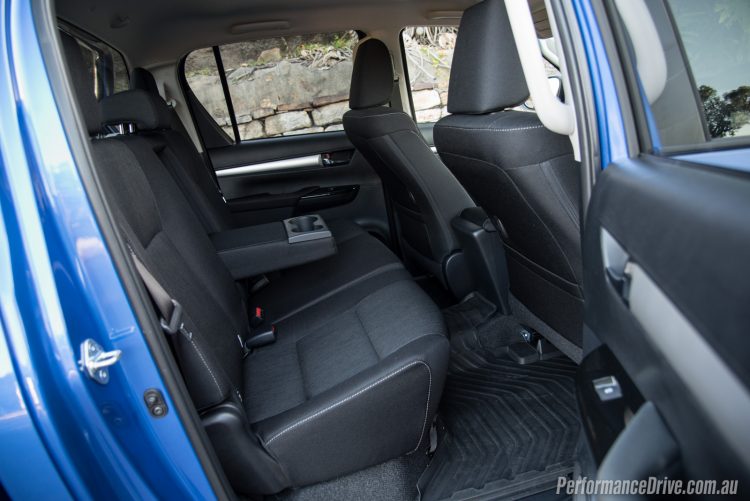 So, should you try the V6 or follow the crowds and go for the diesel? The V6 is definitely a nice smooth engine and it does make the drive more relaxing compared with the diesel counterparts, particularly out on the highway. But if you’re after performance and performance only, you might be a little disappointed. Fuel consumption is also something you will have to take into consideration.

We enjoy the torque of the diesel and the six-speed auto seems better matched to the turbo. For this reason it is the combination we’d recommend most.