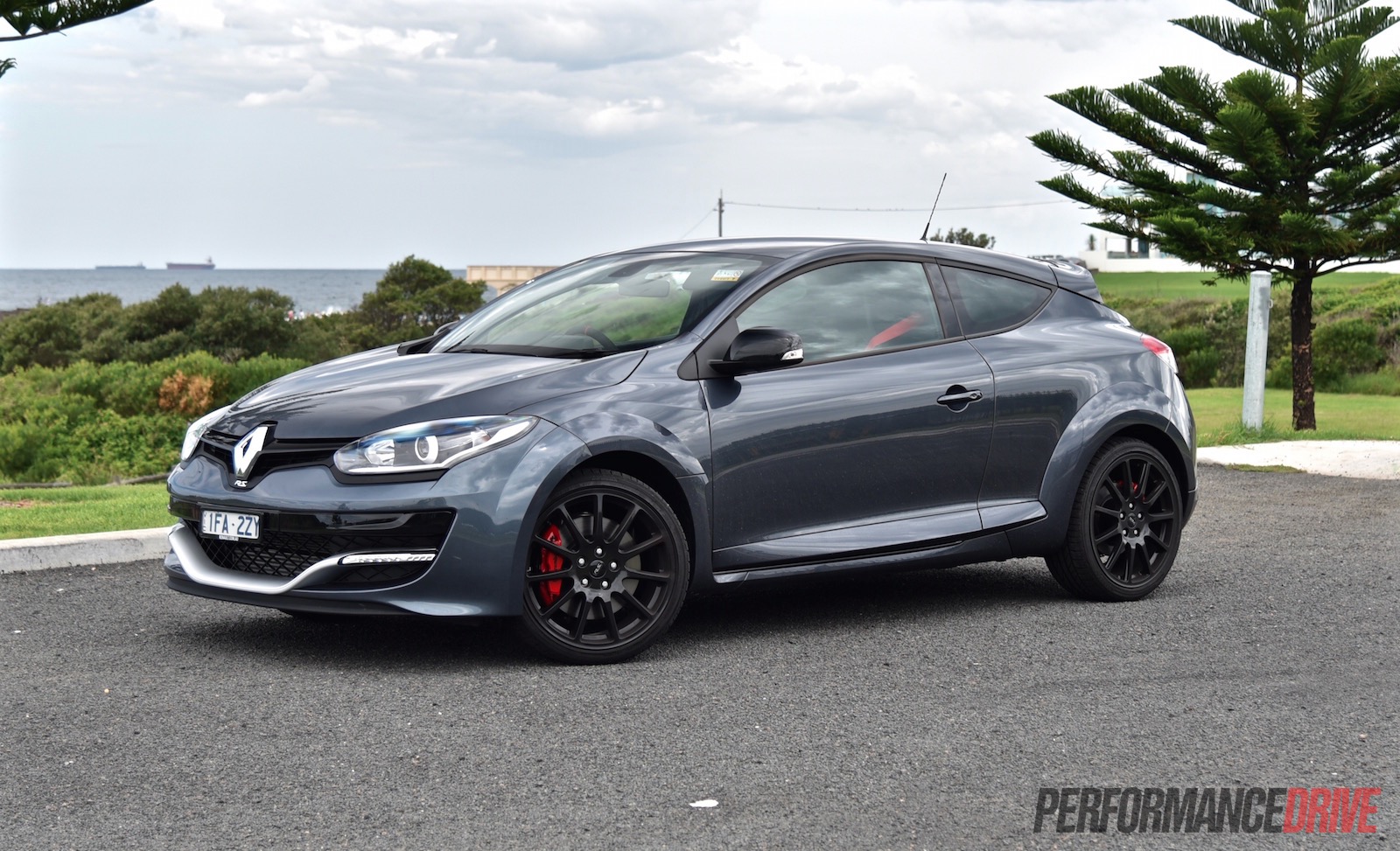 Renault is calling it a highly potent road warrior. Facts tell us it is one of the quickest front-wheel drive hot hatches on sale, as well as being the most powerful currently on the market. 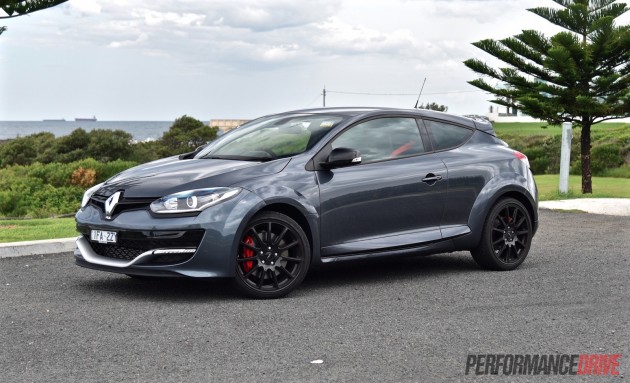 The Renault Megane R.S. 275 Cup Premium isn’t quite the most potent hot hatch the French company sells, stopping just short of the R.S. Trophy-R. However, this one isn’t a special, limited edition model. Instead, it’s a regular part of the showroom range, along with the less-powerful R.S. 265 Cup and 265 Cup Premium.

Under the bonnet sits a 2.0-litre turbo-petrol four-cylinder generating a mighty 201kW of power and 360Nm of torque. This is channelled through a six-speed manual transmission and into a limited-slip-diff-equipped front-wheel drive system. There is no automatic option here; this is way too hardcore for that.

There are – or have been – three variants of the R.S. 275 in Australian showrooms. This Cup Premium version is one of the most affordable, priced from $52,990. Even still, that’s a pretty high price for a hatch. It’d want to be bloody good. 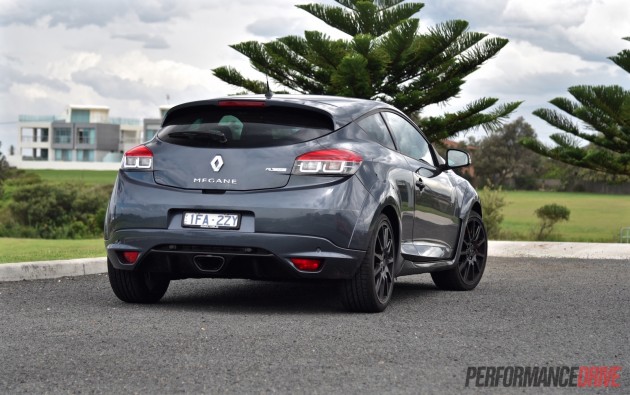 You don’t get a lot with the Cup Premium in terms of feet-sweeping disposition or aesthetic awe. To the untrained eye, it just looks like a sporty hatch with some spoilers and fancy red bits. It’s not until you dive deeper and start unravelling the foundations before things start to build goosebumps and make you want to drive it.

Starting with the cabin. You’ll notice big – and we mean big – rib-cage-grasping Recaro bucket seats contrasted with racy red seat belts. Don’t expect too much comfort with these. They’re all about holding you in place when hitting massive g-forces around corners. They’re so vast they do intrude on rear-seat space and make forward visibility for the unfortunate ones in the back very poor.

The accommodation score for rear passengers is pushed down further due to the small side windows that can make it feel pretty claustrophobic back there. Actual kneeroom and headroom is surprisingly good though, and the seat cushion is much softer than the seat cushion, or lack of, stuffed within the Recaros’ skin in the front.

French cars are usually quirky and unconventional, and it’s the same with the R.S. 275. Buttons are randomly placed around the dash, with a hidden controller stalk behind the steering wheel providing you with some administrative privileges. There’s also a cruise control button sitting lonesome on the centre console, for some reason, and the cup holder is really only useful as a coin holder, at best. As you can probably tell, we don’t like the interior setting, at all. But, hey, if you like things a bit different and unique, then you’ll feel right at home here. We do like some of the materials used inside, such as the Alcantara-wrapped steering wheel and seats, and bits of carbon fibre on the dash, albeit fake. 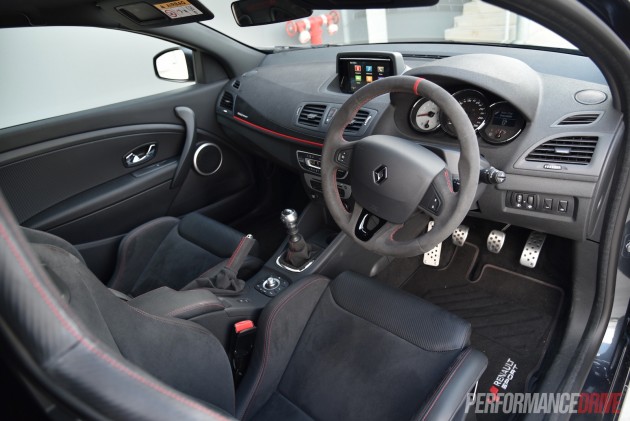 On the dash is Renault’s latest multimedia interface. This is probably the best part about the cabin. It’s not the most advanced system out there but it does incorporate nice clear graphics, with a remote hand pad control module down on the console, almost comparable to other decent systems out there like Mazda’s fantastic MZD arrangement, BMW iDrive, and Audi’s MMI, et cetera. It packs in various apps, including sat-nav and a rear-view camera as standard, as well as some cool R.S. menus showing things like live boost pressure (1250mBar/18.1 psi peak, for us), a g-force gauge, acceleration tests, and even a wheelspin monitor.

Unfortunately, music lovers won’t enjoy the eight-speaker stereo system that’s packaged in. For us, it crackled when turned up and produced less-than-appealing clarity and bass. It recorded 99.5dB at max volume, at which point the speakers sounded like they were going to blast off. (Obviously the stereo is not meant to be cranked up as loud as possible, but under the same conditions with the same song, other cars have been able to handle the test much better – keep in mind we always test with the equaliser settings at default). 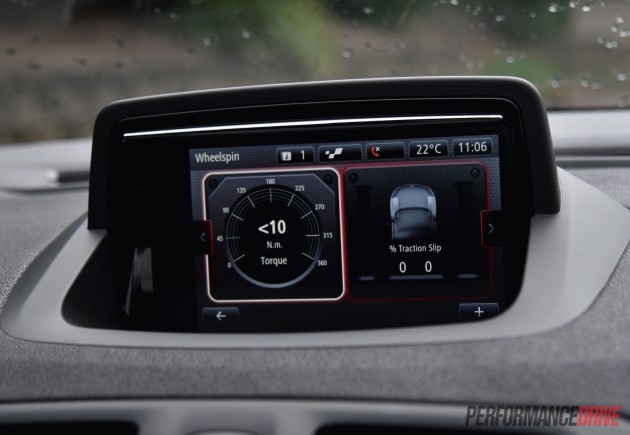 Anyway, let’s get onto the more pressing features that build up this package as it’s not really designed to be used as an everyday-commuter or Sunday-shopping-retriever. This is a hardcore hot hatch that has been developed on race tracks. The best stuff is packed underneath.

The Cup Premium comes with dedicated sports suspension, separate to even the setup on the R.S. 265, with MacPherson struts and lightweight aluminium wishbones up front and a taut torsion beam rear end. There’s also a mechanical limited-slip differential, and a unique six-speed manual transmission with bespoke ratios. The rack and pinion steering is electric and variable, and the same as the setup on the R.S. 265, offering quick gearing with 2.6 turns lock-to-lock. However, it doesn’t share the 11.35-metre turning circle as the R.S. 265. Instead, it does it in a slightly tighter 11.05m. 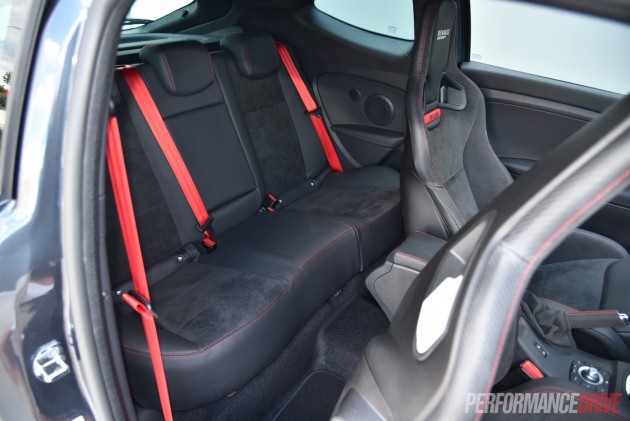 As you’ve probably gathered by now, this is not the ideal vehicle for suburban driving and zipping around the city. The suspension is ultra firm. We usually like a firm setting here at PD, but this is seriously hard-riding. Regular drivers right up to pseudo racing car drivers will notice how rigid it is. On a poor road – like most in Australia – it’ll jiggle your bones right out of their sockets. There is a benefit to this of course, but we’ll get to that later.

Around town it is pretty easy to drive. The clutch doesn’t require a spiritual awakening to understand where its energy lies, it behaves just like a regular clutch, and the power and torque delivery is as predictable as a modern Formula One season. Visibility is also great, with thin pillars and a relatively low dash making it just as practical as the regular Megane.

Working through the gears and using the engine’s strong mid-range pull is rewarding, even in suburban conditions. The engine doesn’t actually rev all that high, with peak power coming in at just 5500pm. It almost possess the characteristics of a potent diesel.  This means you’re able to experience near-enough to full power without looking like an idiot to other road users, revving the bejesus out of it just to surge past a slow truck, for example.

Up to this point you probably won’t be too impressed by the Megane R.S. 275. And in fact if you buy this car and all you do is drive it to work and back every day, you’re never going to understand what it’s all about. Let us explain. 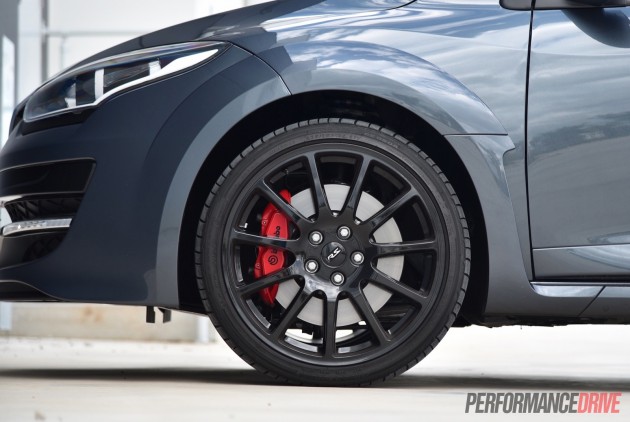 Firstly, find yourself a nice piece of deserted mountain road, preferably with a mix of slow-speed hairpins and high-speed sweepers, or, better yet, attend a track day – such as one of GP EXEC’s private track days – and schedule a few hours away from the wife/kids/parents/pets. Pull over that fancy red seat belt and get ready to tickle all corners of the steering wheel and pedals.

Around corners this thing is insane. It will hold on far longer than other hot hatches, pulling grip from who knows where. There is virtually no body roll at all, and a huge amount of chassis grip. This is a serious setup. The best thing about the handling, in our opinion, is the suspension tune. It is firm, yes, but this more than pays off. It can manage the highest of g-forces and absorb mid-corner bumpers extremely well, while maintaining utter composure and balance throughout. Down our usual, very demanding and technical mountain route, which includes a lot of off-camber bends, unforgiving road contours, and a harsh tarmac surface, the Megane R.S. is pure brilliance.

Okay, so the handling is definitely at the pinnacle of any other front-wheel drive car on the market at the moment, and even potentially at the top of any sub-$60k car. How does the engine shape up?

We’ll just give you some figures to digest first. We timed a best 0-100km/h of 5.82 seconds using our VBox Sport GPS tool, and a quarter mile of 14.51 seconds. The on-board ‘R.S.’ performance timer showed a best of 5.50 and 14.40, respectively, but we can’t confirm if this reading is from GPS data or just the speedo. In any case, for a two-wheel drive car – especially a front-wheel drive where weight is thrown to the back of the car under acceleration, unweighting the front wheels – these are super-impressive figures.

The engine is powerful and provides rapid acceleration, but, you do tend to walk away expecting a bit more. The chassis could certainly handle it. It’s a nice engine but it doesn’t live up to the R.S. pedigree, or rather, the French hot hatch lunacy that we were expecting. A muscular mid-range and plenty of low-down shove does result in excellent performance, but the experience and overall potential to induce goosebumps just isn’t there at equal proportions as the handling. It does produce a tasty note though thanks to a titanium (from centre) Akrapovic bi-modal exhaust.

Stopping performance is, fortunately, just as good as the acceleration. We timed a 100-0km/h stop in just 36.31 metres and taking only 2.79 seconds. This doesn’t reveal the full story, like in any one-off brake test, but after repeated abuse on a demanding road the brakes maintain strong force and continue to dissipate heat, waiting for you to throw them some more. 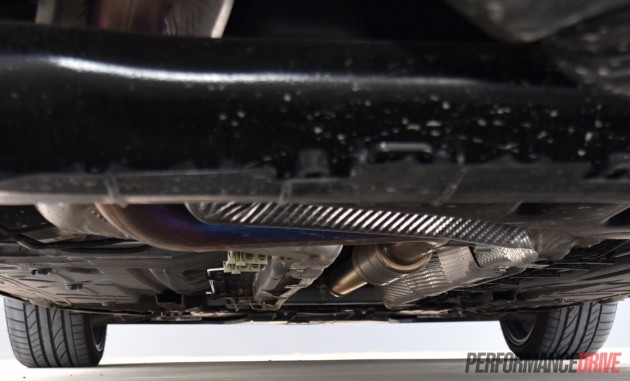 So, it’s an interesting verdict we have for this one. It seems the R.S. 275 Cup Premium is a bit of sleeper, with surprisingly so-so first impressions blown away by the 10-10ths performance and cornering ability. It is the best-handling front-wheel drive car on the market and it gets as close as you can imagine to being the best-handling four/five-seat passenger car under $60k. The only real letdown is the excitement of the engine and low peak revs, and of course the quirky and confusing French-car interior. If you take one of these for a test drive, make sure you sample it on a decent road otherwise you just won’t get to understand what it’s all about.