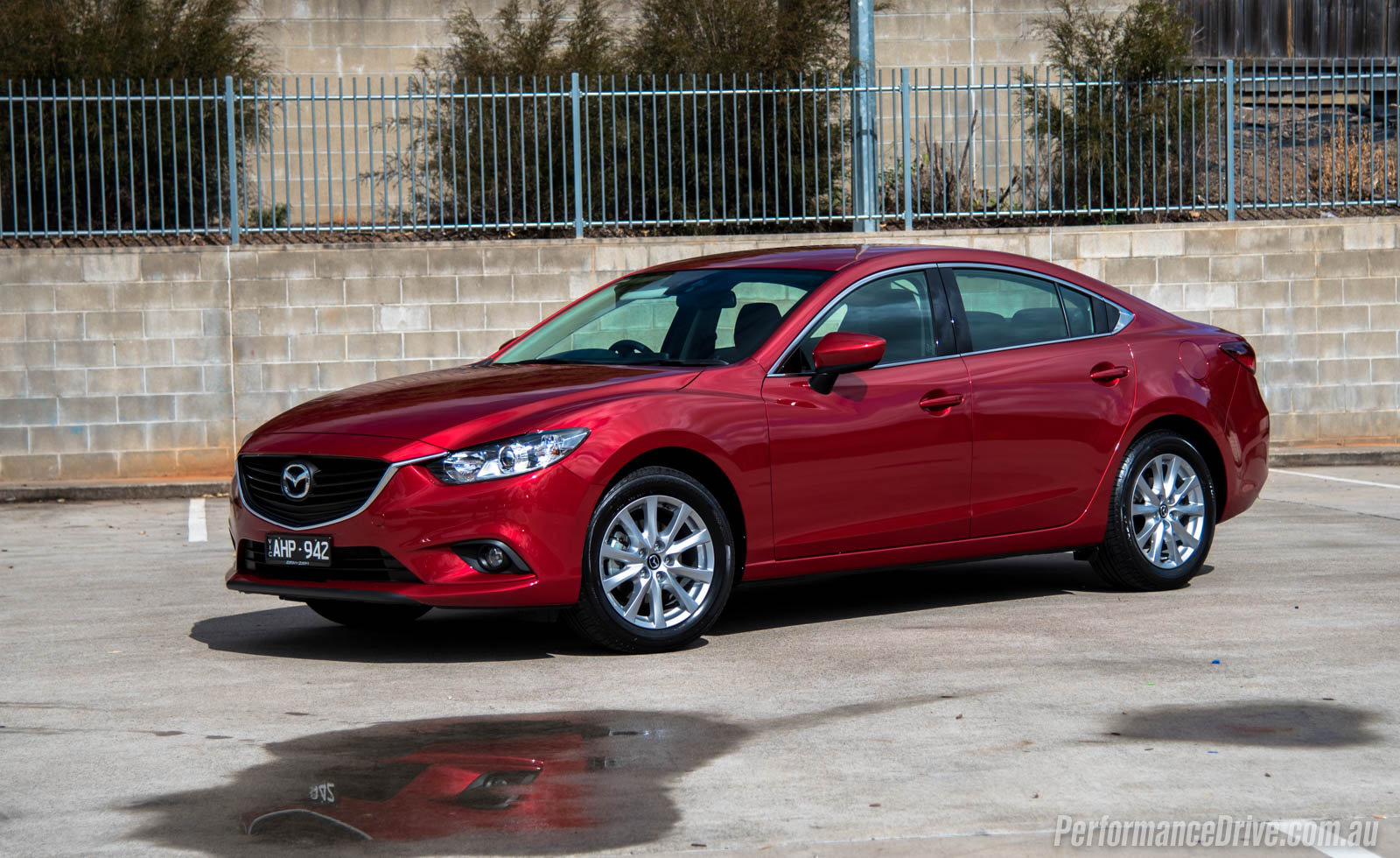 Fewer people than ever before are buying cars like the Mazda6, with the sedan category in a quick decline to its arch-nemesis, the SUV, and its pesky little sidekick, the compact SUV. 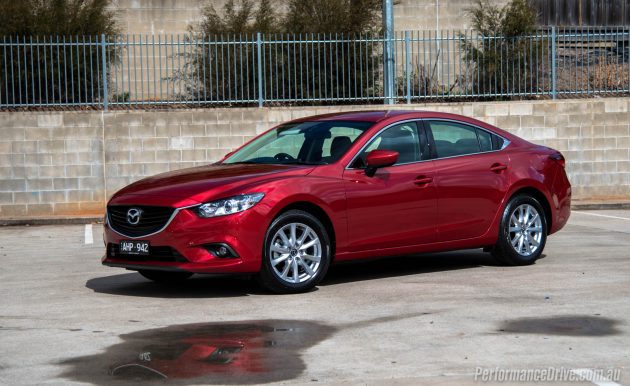 Earlier this year Mazda gave its staple sedan a minor refresh, installing more safety equipment while dropping the price, just to sweeten the deal. But the real question is, is it good enough to combat current car buying patterns and get more bums in a sedan?

The range is split into four variants, with our review car here, the Sport, kicking off at $32,490 (plus on-road costs). Despite the aspirational name, the Sport is the entry-level model. 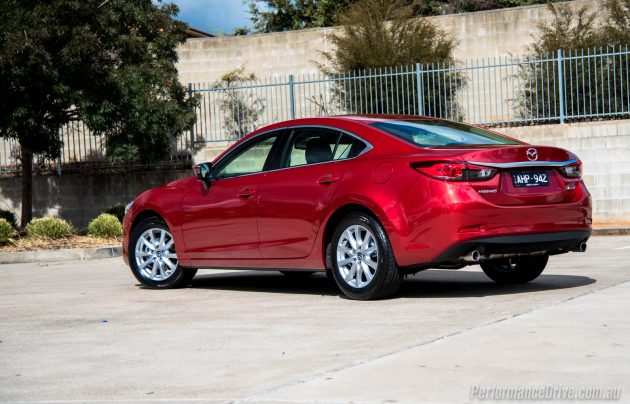 The 2016 Mazda6 update brought in $1200 worth of added safety equipment – previously optional extras. The safety package is made up of a rear-view camera, blind-spot monitor, cross-traffic alert, and smart city braking which provides autonomous braking capability in emergencies. This is all standard now, even for this base model. Not many other base models in this class are able to boast this level of standard safety.

Although the Sport is the baby of the range, the overall fit, finish and equipment included for $33k will keep most buyers satisfied. Standard goodies include stop start technology, dual-zone climate control, leather steering wheel and gear knob, automatic wipers and lights, cruise control, a 7.0-inch touch-screen interface with MZD Connect and sat-nav as standard (one of the only base models in the class to come with sat-nav as standard too), fog lights, six airbags, and 17-inch alloy wheels.

It remains unchanged on the outside for 2016, infused with Mazda’s Kodo design language, complete with sweeping lines and a bulging bonnet. The curves add to the premium aesthetic; cheap is a word you can no longer attach to the looks of the Mazda6, or any Mazda in the lineup for that matter.

Stepping inside with a keen eye, you can spot the minor touches that make the 6’s interior such a pleasant place to sit. Textured black plastic trimmings are used for most of the dash, with some faux leather. The centre console housing the infotainment controls, handbrake and gear level have a particularly European look about them, and while fairly basic in material, the interior design gives it a chic edge over its Japanese rivals.

Practically speaking, this car will take care of you and the family, no matter their size. The cabin is spacious both front and back, with comfortable cloth-lined seats and decent bolsters for the front. The 6 is nearly five meters long, so there’s ample legroom and a massive 474L boot.

Mazda’s efforts to reduce road noise through modifications to the door seals, suspension mounts and even foam used in the seats, minimise most exterior bumps and rattles. The changes have worked, with a 25 per cent reduction in noise, vibration and harshness over its predecessor. There is a bit of tyre roar that enters the cabin, but the 6 can hold its own against its premium, and significantly-pricier European rivals in this respect. However, the 2.5-litre engine remains a noisy unit, emitting 40dB at idle and a harsh 86dB at full throttle. 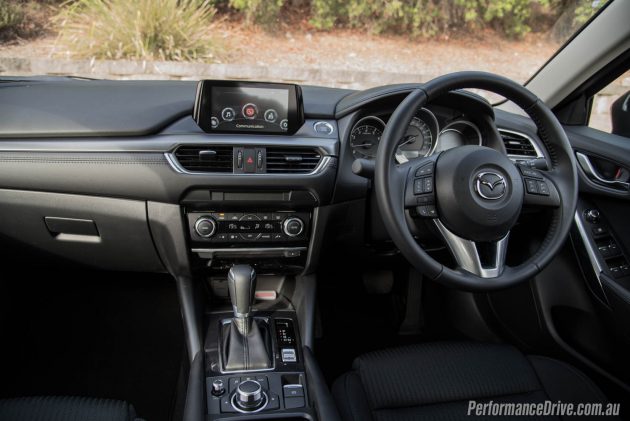 Powered by a 2.5-litre four-cylinder, also seen in the sporty Mazda3 SP25 models, it transfers 138kW at 5700rpm and 250Nm at 3250rpm to the front wheels, via a slick six-speed automatic transmission.

This powertrain’s forte is its smooth, economical and steady delivery of power, only running out of puff above the 5000rpm mark. If you push it, you’ll get a loud and raspy engine note through the cabin as mentioned, and reasonable performance for the class. We timed 0-100km/h in 8.03 seconds, which is 0.5 seconds quicker than the class-favourite Toyota Camry according to our stopwatch (8.5 seconds). It’s even got flappy paddles to keep your inner boy-racer happy.

Another admittedly surprising aspect of the Mazda6 is the impressive driving dynamics. Obviously we’re talking here about a mid-sized sedan, with an emphasis placed on practicality and being family friendly, however, a handful of Mazda engineers made sure it’s a steady performer.

The steering is light and provides decent feedback, with a competent chassis and suspension calibration ensuring the 6 is a high achiever in this category. The front axle can hold grip admirably well for a large and powerful front-wheel drive car. It feels competent and steady under punishment, with only the narrow-ish generic tyres being the first weakest link.

Tone it back and drive like a civil person and the powertrain becomes effortless around the city. It is perfect for the urban commute. The engine is undeniably frugal, with an ADR combined cycle figure of 6.6L/100km. This makes it significantly more economical than the Toyota Camry (7.8L/100km), which also uses a non-turbo 2.5-litre four-cylinder. We returned figures of 6-7L/100km in the real world, and as low as 5.5L/100km on the highway. This is very impressive for a non-turbo vehicle.

Ultimately, the Mazda6 cruises around the city in a fashion that makes you want to drive economically, in comfort and quietness. It is a delightful daily transportation device. 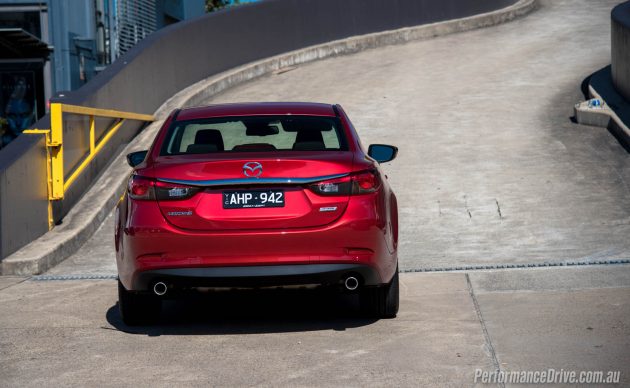 In the mostly conservative mid-size sedan segment, the Mazda6 stands out with modern Japanese style, and now excellent value. It’s feature-packed, even in base model Sport guise, and it is one of the more enjoyable and engaging drives in the otherwise boring class. If you’re in this space you simply must take a closer look at the Mazda6. It’s worth mentioning Mazda also offers a potent and even more economical turbo-diesel option, but it does require a price premium.

PROS:
– Price; lots of car for the money
– Practical motoring at its best
– Standard features
– Nicest design in the class?