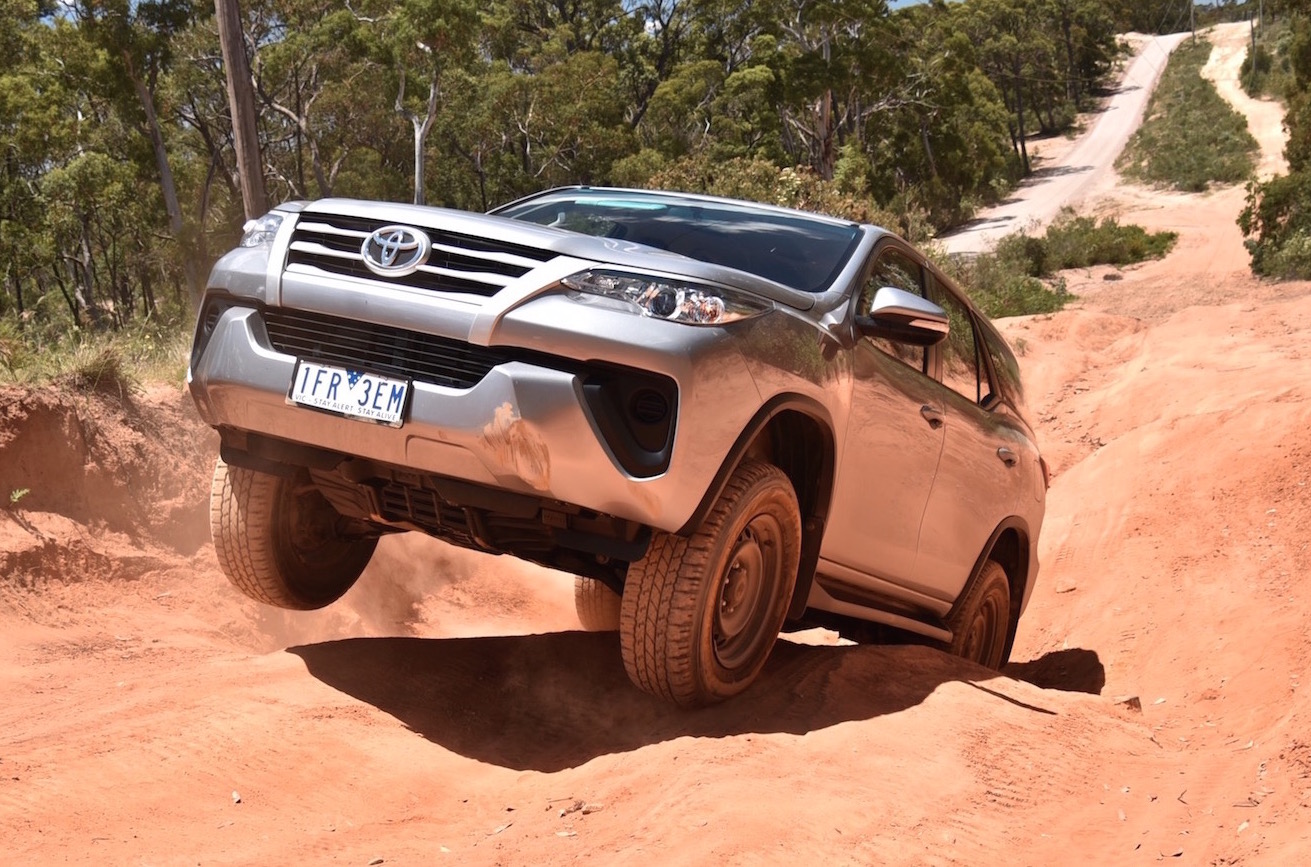 Toyota’s sales dominance is set to continue, now almost over-providing for popular corners of the market. Enter the all-new 2016 Toyota Fortuner. It joins the showroom as Toyota’s fourth seven-seat SUV. 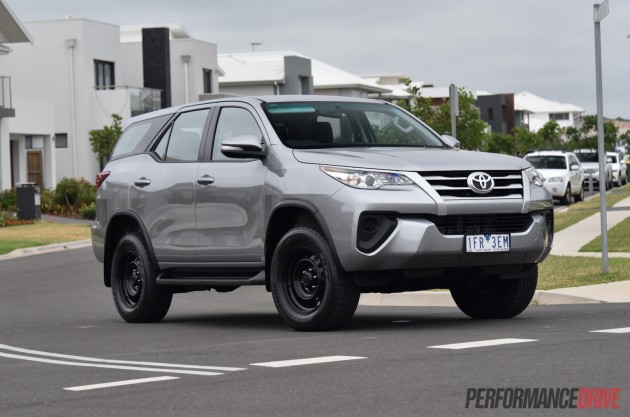 Most manufacturers have just one seven-seat SUV on offer, if any at all. Toyota is targeting families and adventurous types with the new Fortuner, but does it do anything the Prado can’t already do? Before we go into the finer details we’ll get the basics down first

The Fortuner rides on the same platform as the new HiLux. This gives you some clue as to what type of vehicle it is and what it’s designed to be capable of; serious off-roading. The Fortuner is primarily a rough and tough SUV that just so happens to offer seating for seven.

Under the bonnet is the same 2.8-litre turbo-diesel four-cylinder engine as seen in the latest HiLux and Prado, producing 130kW and 450Nm (420Nm for manual). This is the only engine option, but it can be paired to a six-speed manual or six-speed auto (as tested).

Buyers can select between three main variants, spanning from the GX (as tested), the GXL, to the top-rung Crusade. Prices kick off at $47,990, plus $2000 for the auto. This makes it around $5000 more affordable than the equivalent Prado. 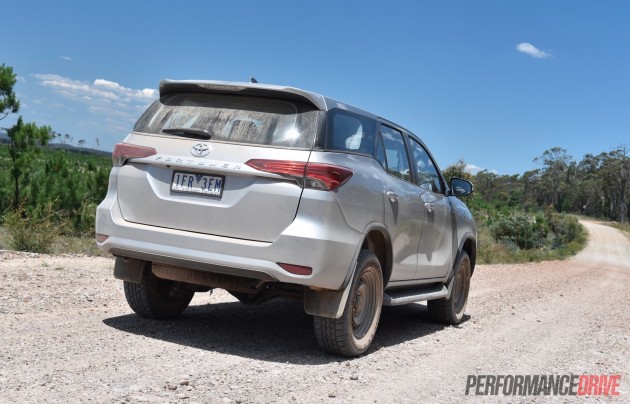 Being based on the HiLux, you don’t expect the interior to be that flash. But it’s not too bad. Toyota has applied lots of basic yet durable plastics to the decor for that robust and rugged feel, with some modern design themes such as silver highlights and a curvaceous dash adding some futuristic appeal. Compared with the slightly more expensive Prado, the Fortuner’s cabin seems longer and taller, albeit a touch narrower.

The brown seats aren’t very attractive to look at but they are surprisingly soft and supportive. They’re situated to provide good headroom and legroom in the front as well. Although, like in the HiLux, the steering column offers limited rake and reach adjustment, resulting in a less-than-ideal driving position in our opinion. In the middle row, which can be adjusted for recline and slide, passengers aren’t going to be complaining about room or comfort.

It’s only in the third row that you might receive some expressions of discomfort from taller children and adults. The lower seat cushion is a big square seat, however, the backrest is short and headroom is restricted despite special cutaways in the ceiling. It is perhaps at the larger end of the scale compared with some of the other heavy-duty SUVs though, such as the Isuzu MU-X and Holden Colorado 7. Interestingly, it feels like there is more third-row space than what’s offered in the Prado.

Luggage space is rated at 200 litres with all rows up, or 716L with the third row down, and 1080L with all rear seats down. This compares well with the Prado’s 104L, 553L and 974L offered, respectively. There aren’t any cubby holes or tie-down hooks in the back, unfortunately. 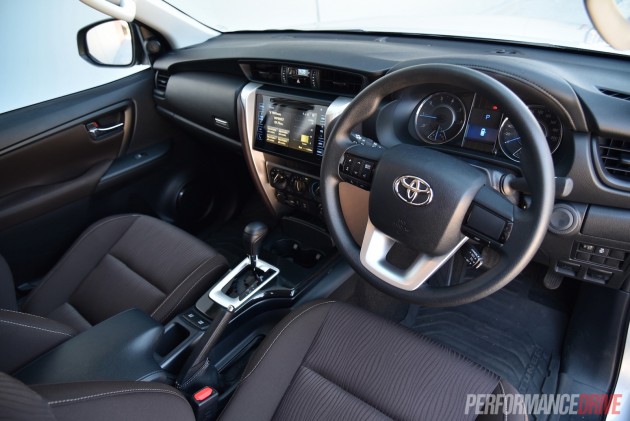 For the front passengers there is a modern touch-screen interface. It’s simple to operate, with big clear buttons making selections easy even on the go. We like the way the screen doesn’t look like a stick-on tablet like it does in the HiLux. Instead, it’s properly embedded into the dash and blends in with the design. Connected to it is a six-speaker stereo which gives off decent sounds, especially for a base model unit.

Going for the base GX doesn’t get you many creature comforts or extra luxuries, obviously, but it does come with most necessities as standard. There’s front and rear air-conditioning, a rear-view camera, first and second row cup holders and bottle holders, voice recognition technology and Bluetooth, and a cooled compartment in the front. As you’ve probably noticed, the GX doesn’t come with alloy wheels. Instead, it gets 17-inch black steel rims to match the off-road personality and go-anywhere intentions. 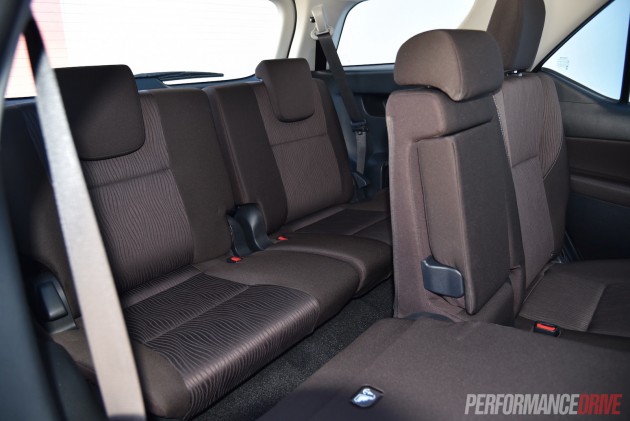 On the road the Fortuner feels like a tall, hide-riding 4×4; it’s impossible to mistake this for a station wagon, like some SUVs and softroaders. It uses a solid ladder frame chassis underneath with a live-axle rear end and coil springs, and double wishbone independent front suspension.

It leans into corners with ute-like body composure, and the steering is mostly formal and logical with only one purpose in mind. Tyre squeal is also premature if you’re in a bit of a rush around roundabouts or right-angle turns. You aren’t alarmed by any of this though. In fact, it gives off an attractive rugged driving personality. It’s a bit like walking around in gumboots; you know they aren’t the most aesthetically pleasing but when the time comes, you’ll be glad you’re wearing them.

That brings us to the off-road driving. This thing is designed to be an all-terrain, all-conquering machine. And it is. There is a whopping 279mm of ground clearance available, which means it is one of the tallest-driving mainstream SUVs on the market. It easily overshadows the Prado’s 220mm. 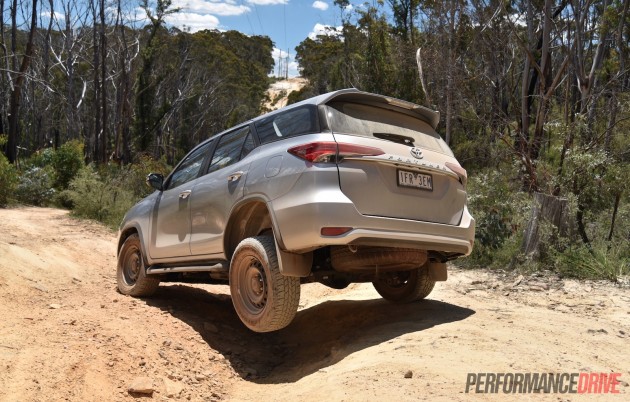 Approach and departure angles aren’t as impressive, rated at 30 degrees and 25 degrees compared with the Prado’s 32 degrees and 25 degrees. During our off-road test in Lithgow the nose actually scrubbed out and caused a dent, but we think this had more to do with the protruding and pointy design rather than the actual approach angle.

Off-road performance is simply astounding. Traction is paramount, particularly with the standard locking rear differential engaged. Low-range crawling makes steep inclines a breeze, or you can leave it in high range (H4) for general slippery conditions. It really is a beast when it comes to off-road stuff. It might fall short of the Prado’s on-road poise, but it certainly excels in the rough stuff. The standard 265/65 tyres are quite grippy and aggressively patterned too, providing plenty of give thanks to the thick sidewalls.

As for Toyota’s new 2.8-litre turbo-diesel, the unit is noticeably smoother, quieter and more refined than the 3.0L unit it replaces. Matched to an equally fresh six-speed auto, the Fortuner gets along just fine. It is swifter than the heavier (by 200kg) Prado, too. It gradually moves off the line with a hint of turbo-lag, with max power spiking at 3400rpm. Peak torque is available between 1600rpm and 2400rpm, resulting in a useful mid-range and decent highway grunt. Flat out, we timed 0-100km/h in 12.49 seconds – about 0.1 second quicker than the manual GXL Prado we tested a few months ago. 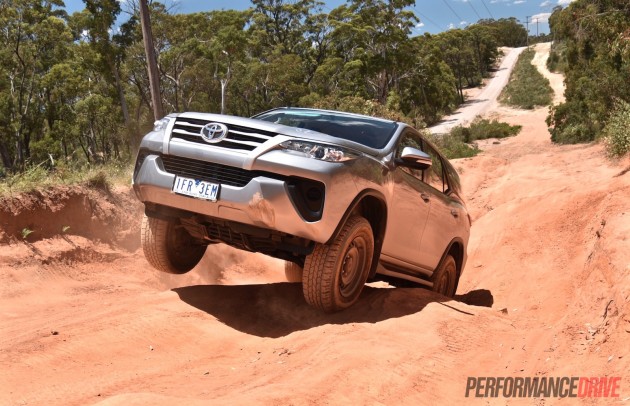 At first we were asking what does the Fortuner do that the Prado can’t already do? After a week in the GX we can confirm this is a much more heavy-duty vehicle. Everything from the interior layout and materials, the exterior dimensions and suspension, and even the drive character are all skewed toward off-road driving in the Fortuner.

If you’re thinking about buying a Prado but can’t quite stretch to it, financially, the Fortuner is a great alternative in terms of practicality, features, and of course reliability. However, if you’re serious about getting dirty and doing some proper exploring, the Fortuner has the clear advantage. It is the most capable seven-seat SUV we’ve ever tested, this side of $50k.

CONS:
– Fuel economy better with less-popular manual
– Ride and handling like a (modern) ute
– Exterior design takes some getting used to?