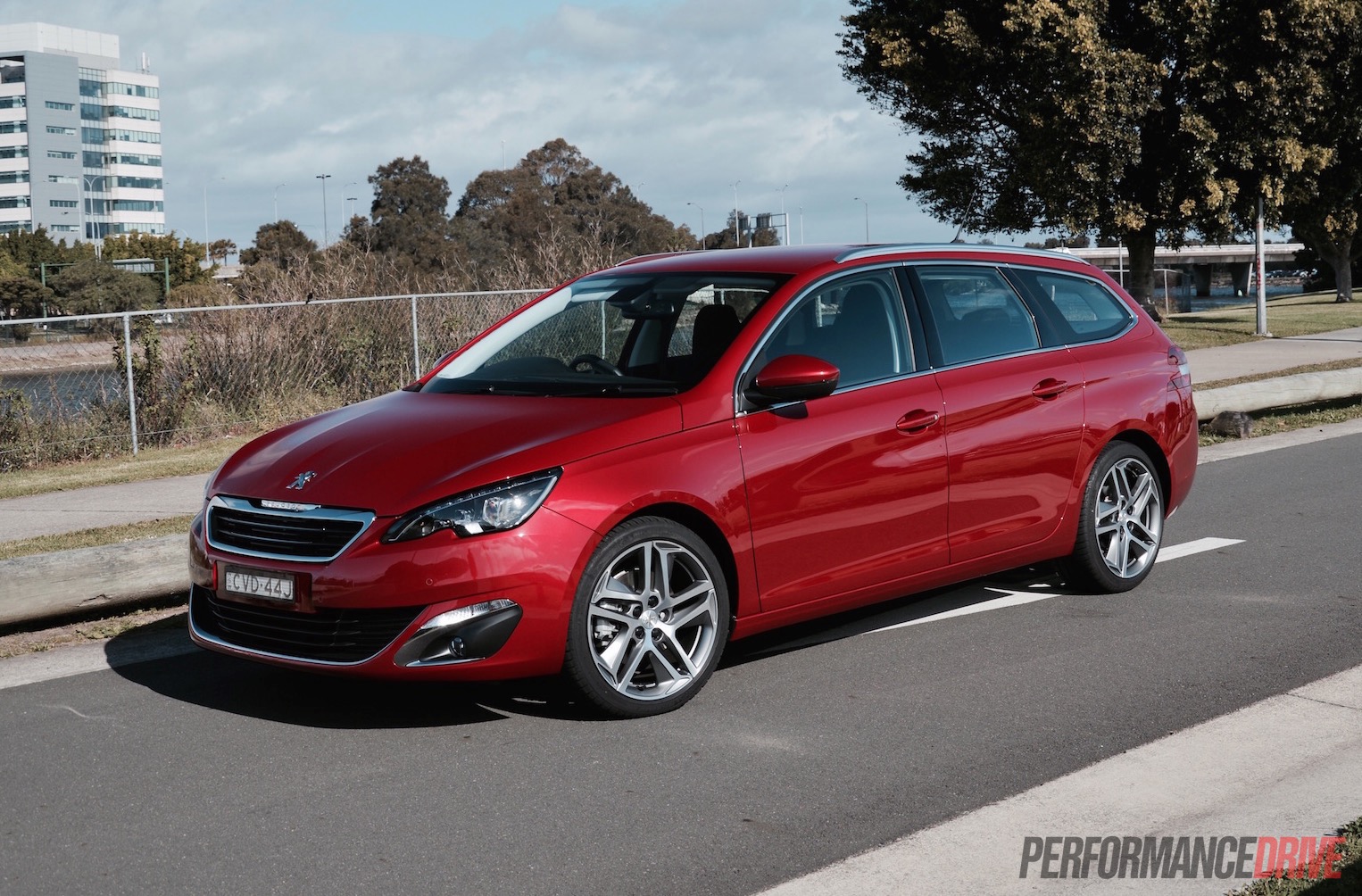 If you’re in the market for a practical small car but you’re tired of seeing the same boring Japanese models, the 2015 Peugeot 308 Touring could be right down your alley. 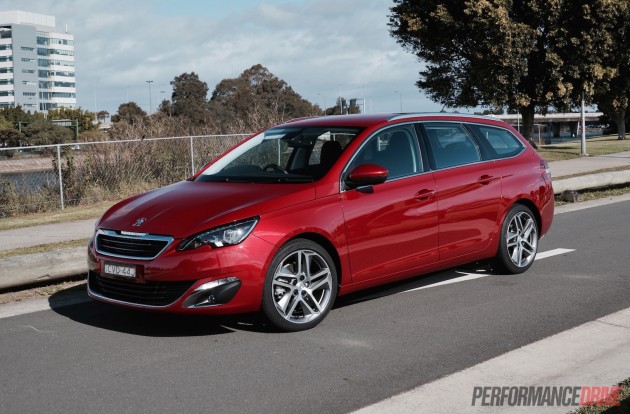 The Peugeot 308 is one of the lesser-known contenders in the popular small car market, often overshadowed by not just the Toyota Corolla and Mazda3 frontrunners, but also the Volkswagen Jetta and Honda Civic in terms of monthly sales (in Australia). Peugeot’s local arm underwent some changes recently and since then, sales have increased noticeably for the award-winning Frenchy.

So far this year 705 examples have been bought by Australians, more than double the effort during the same period in 2014 (269). This is partly thanks to some sharper pricing and also thanks to the new model being introduced in October. At 705 units, it is the 15th most popular model in the 32-strong fleet of small cars currently available in the country. Not all are offered in wagon form though, which gives the 308 a bit of an edge. Peugeot Australia says that in its first month on sale, the wagon exceeded initial sales expectations by 300 per cent.

European cars have definitely been coming down in price over the years, with the 308 range kicking off from just $19,290 for the base model Access 1.2T. The Touring Allure wagon variant we’re testing here, featuring a new 1.6-litre turbocharged petrol engine kicking out 110kW and 240Nm, starts at $34,689 (excluding on-road costs). It’s available exclusively with a six-speed automatic and front-wheel drive. 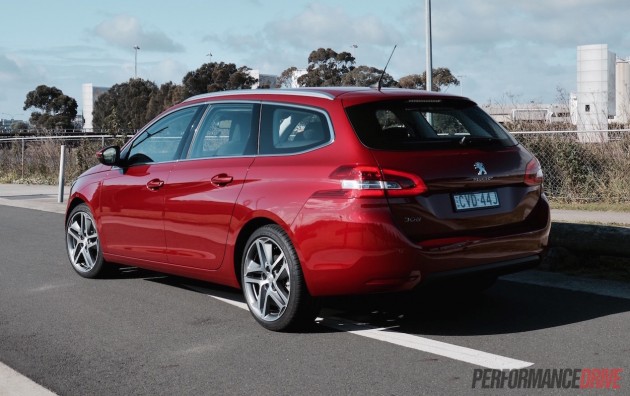 From the moment you open the door the 308 is steaming with style and French design. There isn’t a conventional dashboard, button, or control in the entire cabin. Peugeot seems to have gone to extra lengths to ensure this practical runaround stands out in the crowd. There is no clutter around the dash or console, with most functions and controls incorporated into the touch-screen. There are only some climate control options down below for the demister and air recycle, and nothing else.

After spending only a small amount of time in the cabin, you come to realise Peugeot might actually be onto something with this reduced-clutter philosophy. There’s just no fuss, and nothing to distract you. Mind you, you do have to spend some time getting used to where everything is within the touch-screen before you can make quick selections while on the go – even turning the fan speed down involves multiple selections.

For the front passengers there’s a set of comfy and supportive seats wrapped in what feels like a really robust and hard-wearing material, while headroom and legroom and the general environment is airy and spacious. Rear seat space is a little tight for this segment, but the seats are comfortable and cushy with decent drop down to the floor for your legs. 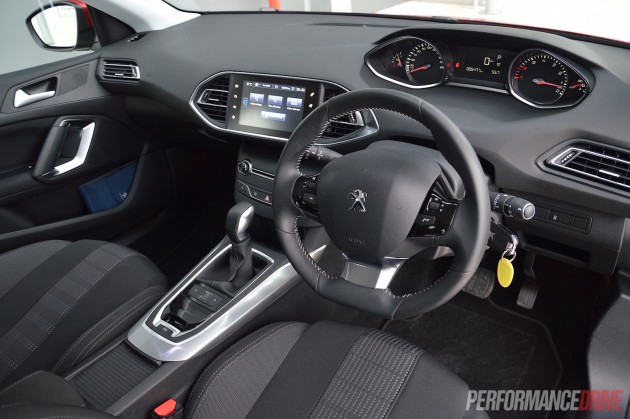 Around the city the 308 is very easy to maneuver and park. There’s good visibility through the front and corners, and even checking the rear blind spots. The only area that does suffer in terms of a clear view is the instrument cluster. Peugeot has placed it right back on the dash. While it might look cool it can be completely obscured by the steering wheel, depending on your position.

The tiny steering wheel takes some time to get used to but it is fun to hold and turn. It makes you feel like you’re driving a little sports car. And then when it comes time to navigating through roundabouts you can simply flick it around. There is a lot feedback coming through the wheel too, so you always know where the wheels are and how the tyres are coping. It’s definitely a fun car to drive in even the most mundane conditions.

Ride comfort is supple yet taught enough to be categorised as ‘European’. The Michelin 225/55 tyres aren’t that low profile, which enhances the ride quality further. Over mid-corner bumps the suspension does well to keep the platform settled. The suspension seems to be set up quite nicely for Australian conditions, if inadvertently.

If you like to up the pace a bit, the 308 responds eagerly. It loves to tackle mountain roads, offering impressive grip and a distinct and exciting lightness. It remains confident and planted at all times too, leaning in and staying committed to the bend well into and beyond the apex.

In terms of engine performance, the specs place it at the higher end of the class. On the road though the 1.6 feels fairly average. If you’re expecting the zip and pop of a small, European turbo engine you might be a bit disappointed here. While there is nothing wrong with the unit per se, it presents a similar, dull-ish character to the naturally aspirated Japanese rivals.

On that note, some praise should be directed toward engineers for removing any lag or surge that you would typically feel with a turbo engine. Flat out we timed 0-100km/h in 8.2 seconds, which is about average in the segment. Mid-range punch is perhaps stronger than initial take-off acceleration, with the maximum 240Nm available between just 1400rpm and 4400rpm. 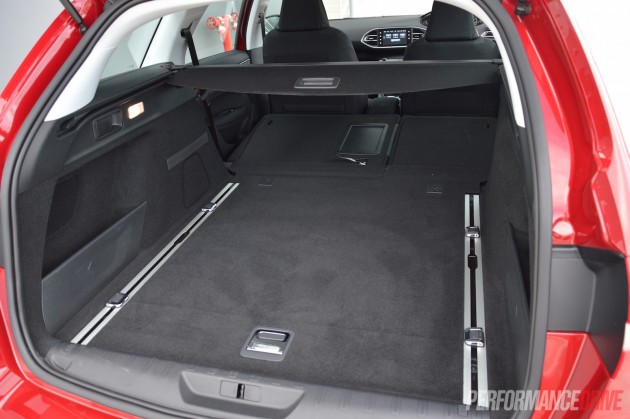 This is a great overall package. It’s practical, it stands out in the class with a fresh and modern design, and it handles like a decent little go-getter. Some things to consider are the initial price, which is quite high (although it does come with stacks of equipment), and the 1.6 engine which is neither exciting or that fuel efficient for the segment (we averaged around 8.3L/100km, official average is 6.5L/100km).

Unless you’re really against diesel engines, we’d suggest you check out the 2.0 turbo-diesel version. It is around $2000 more expensive but it offers 370Nm, matched with the same 110kW. It also offers an official average fuel economy of just 4.2L/100km. 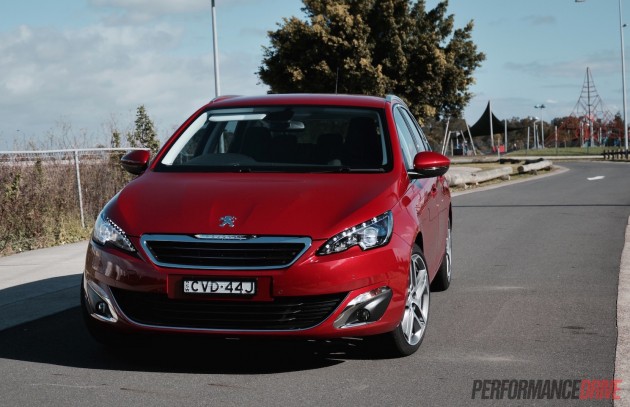