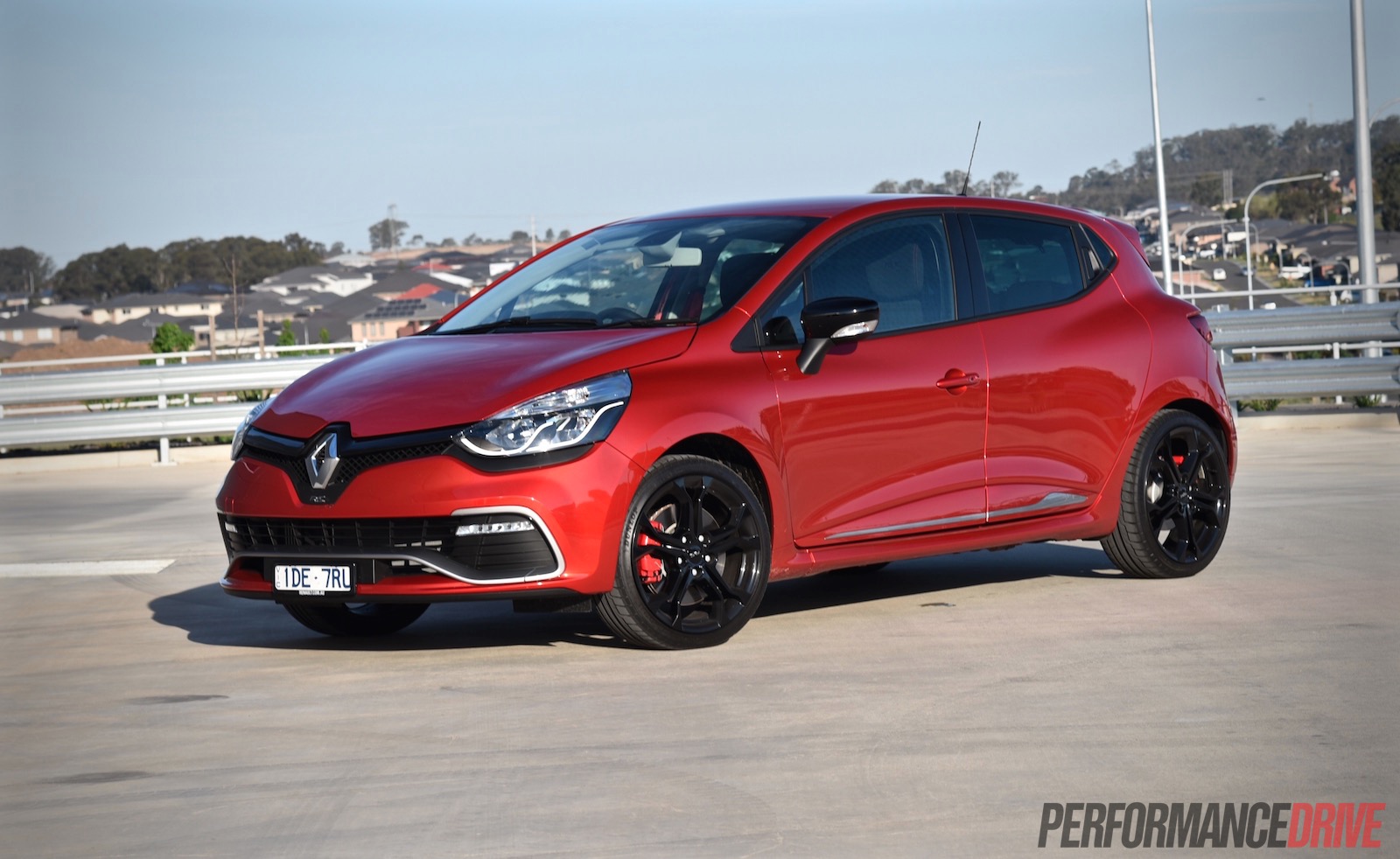 It carries such a reputable nameplate, but can the 2015 Renault Clio R.S. 200 Cup still be the best compact driver’s hot hatch with such fierce rivals fighting for the lead? 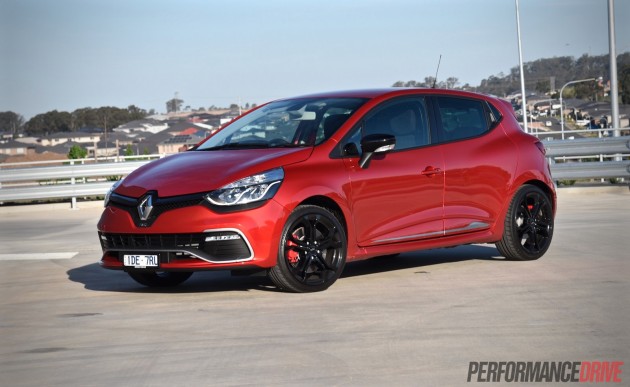 The Clio R.S., or Renault Sport, is one of the veterans of the compact hot hatch segment. It blends chic French styling with serious powertrain and chassis credentials to support everything from spirited mountain drives to hardcore track sprints.

Renault announced the all-new model back in 2013. It upset a lot of fans, initially, because it lost the old-fashion manual transmission in place of a dual-clutch automatic. Nowadays though, automatics are becoming more and more popular, bringing eye-blinkingly quick gear shifts and superior fuel economy over their manual counterparts.

The latest 200 Cup model comes with a 1.6-litre turbocharged four-cylinder engine producing a class-leading 147kW of power, and 240Nm of torque. It’s mated to a six-speed dual-clutch (EDC) automatic transmission with front-wheel drive. There is no manual option.

Prices have fluctuated for the hot Clio in the past couple of years, but now it’s settled at $31,990 (excluding on-roads). This makes it the most expensive car in the class, towering over the Ford Fiesta ST (from $25,990), the Peugeot 208 GTi (from $29,990), and even the dual-clutch automatic version of the Volkswagen Polo GTI (from $29,990), in terms of starting prices. 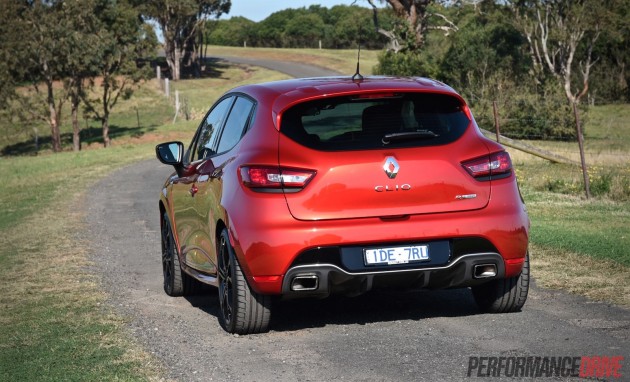 French cars have always had a unique styling theme, well distanced from designs from Germany and Japan, and even from the increasingly popular Korean marques. You only need to take a quick glance at the Clio R.S. to see what we mean. From the beady headlights, curvaceous panels, and the suitably yet subtly bulging wheel arches, it screams out uniqueness and sportiness in equal measures.

Open a door and you’ll be hit by a similarly high-impact swarm of freshness and specialty. The cabin features a fairly straight-forward black and red two-tone colour scheme, but the dash and door trims are elegantly styled, with the main centre fascia protruding outwards on its own platform.

New for the latest model is a touch-screen interface system. These systems are becoming a staple element in modern-day vehicles, so now it’s at a point where we don’t credit a touch-screen system alone but merely credit how well it works. In the Renault it’s pretty good but it doesn’t lead the class. The menus are intuitive and there’s a decent mix of apps to keep us all familiar with our beloved androids and ‘i’ accessories, but for us there aren’t enough options within the interface. Fortunately, there is a bulky control stick which pokes out from the steering column that can help you navigate your way around the functions.

It’s a similar story with other parts of the interior, in that, it doesn’t accommodate your needs as much as it should. For example, the air-con fan speed goes from off, 1, 2, windscreen demister, and then max. And there are two cup holders on the centre console, but they are way too small to contain any sort of cup. Like other French and Italian cars, it’s like Renault has gone out of its way to be different purely for the sake of being different, without considering practicality. For some areas anyway.

In terms of other downsides to the package, we’re not a fan of the card-like key which can be quite awkward to hold and store in your pocket. We also find the interior a bit cheap and over plasticised, especially for a car that is the most expensive in the class. The four-speaker stereo is average too, again, for holding the title as the most expensive car in its class.

There is a respectable list of standard features though, including sat-nav, Bluetooth and USB connectivity, front and rear door pockets, a starter button, and selectable driving modes. Of course, the mechanical aspects are also well-dressed, with tasty items such as sports suspension, brakes, a sporty bodykit, and 18-inch black alloy wheels all coming as standard. 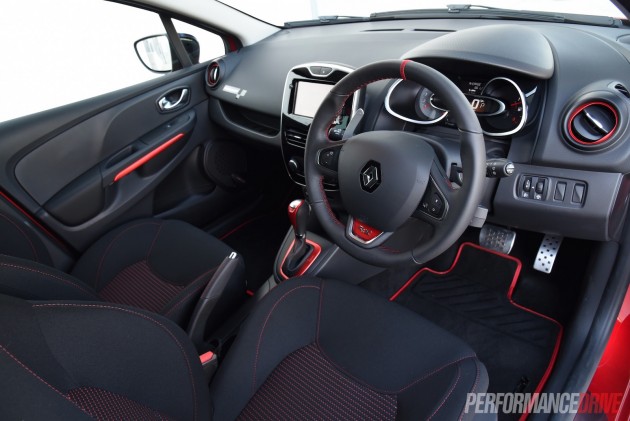 Renault hot hatches are considered the bee’s knees when it comes to front-wheel drive dynamics and driving enjoyment. They often set the benchmarks for other brands to follow. Not anymore, as far as we’re concerned. Let us explain.

This car offers brilliant handling in terms of turn-in grip, pin-point accuracy, and traction to escape from apexes. However, the rivals now offer this in equal or higher proportions. This means the Renault’s trump card, its handling, may have expired.

Of course this doesn’t detract from the Clio’s prowess in the corners. It’s still an awesomely committed and confident vehicle through everything from high-speed sweepers to tight hairpins. It tips in with no body roll and remains on your preferred line like it’s a real-life slot car. You can achieve huge g-forces, and the 205/40 tyres aren’t likely to give up before you do.

If you’re an ambitious driver you can also flick the tail out for short bouts of oversteer either by throttle lift-off at the right time, or by using momentum. Drifts don’t last long, being a short wheelbase front-wheel drive, but they are very easy to control, regaining composure smoothly and rather gracefully. Power delivery is outstanding too, even through the arc of a bend, with excellent grip from the front wheels thanks to a tight limited-slip differential.

Engine performance is not as impressive as the figures suggest in our opinion. Power builds progressively yet seems to tamper off the higher you rev it. This is great for economy but not good for a vehicle with a reputation for being the best screaming hot hatch around. This is not helped by the EDC transmission either, which likes selecting higher gears as soon as possible in the hunt for economy.

The dual-clutch unit has a mind of its own, sometimes requiring lots of throttle application before kicking down, while other times, when it changes mood for no reason, it will kick down too soon and actually surprise you. It’s all over the place. Engaging the R.S. sport driving mode does at least put it into a consistent frame of mind, however, the gears are held right up in the rev range and it changes down quite aggressively for any sort of public road driving.

In this mode we actually left it in auto rather than using the paddles on our usual mountain route test. Using the paddles doesn’t really amplify the driving experience in our opinion, as they don’t respond to your touch as quick as you’d like. It changes up automatically at the redline too and won’t hold into the rev limiter. This would become very annoying out on the track. Adding salt to the wound, the paddles themselves feel strangely soft and require a complete pull in, missing out on the nice mechanical feel of most other paddle-shifters around.

Overall, we are a bit disappointed in the Clio’s performance. This might be because the expectations are really high. But we think it’s mainly because this car is almost becoming outdated by the more capable and more enjoyable rivals. 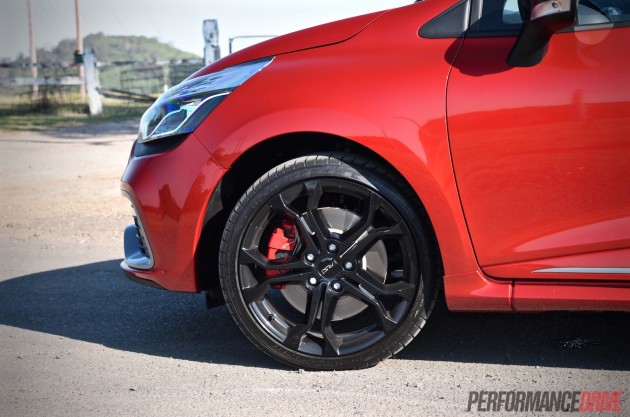 To answer the original question, we think the latest Clio R.S. 200 Cup has lost the title as the ‘best compact hot hatch’. It’s not that it’s a bad car. It’s that the rivals are so good at the moment that the Clio is unable to stand out in any specific area – except boot space. Inside, there are just too many things to get used to in our opinion, and on top of this, there’s the high price to deal with. There’s also no manual option. It leaves little reason to choose a Clio R.S. over the top-notch rivals.