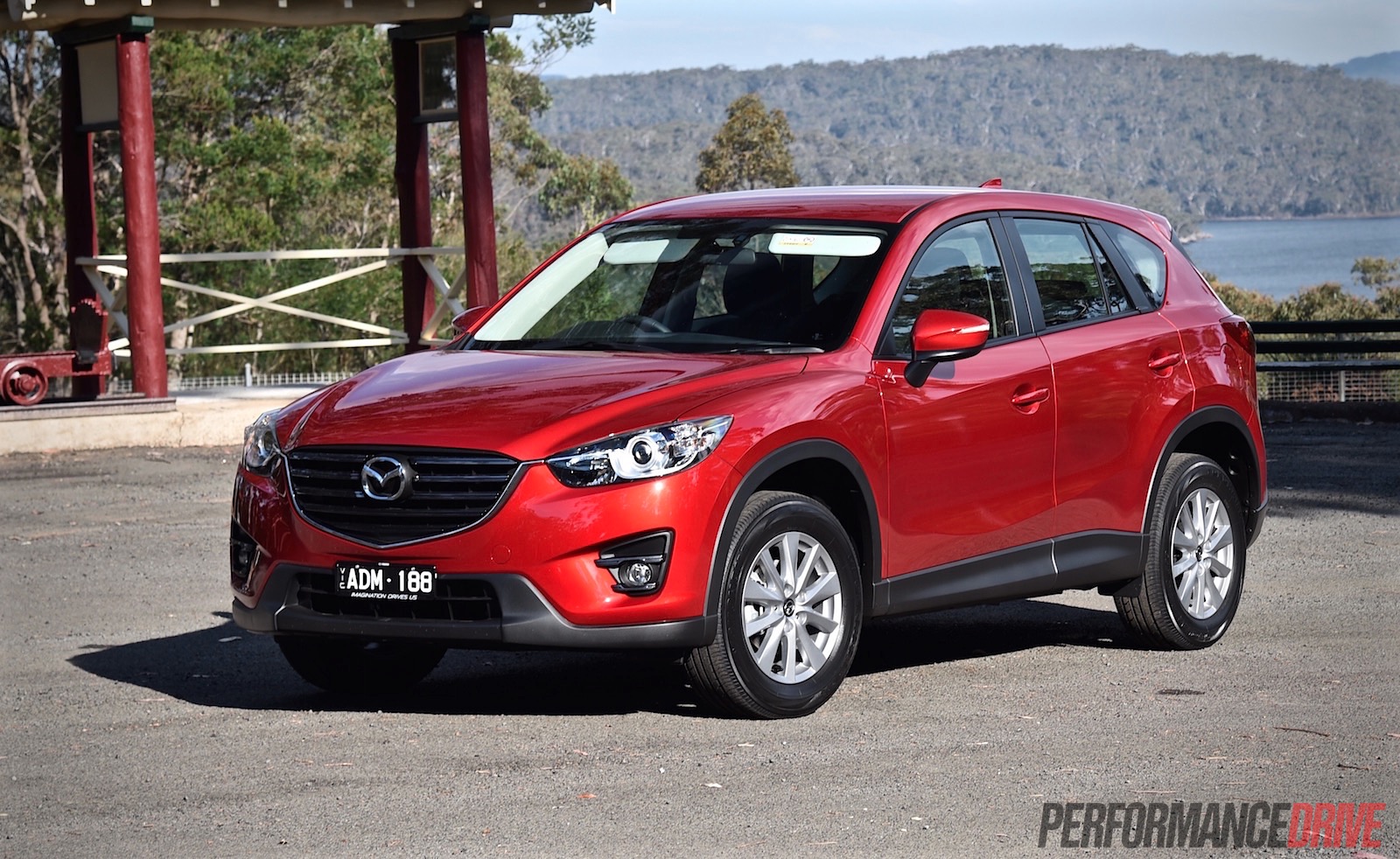 How do you decipher the overwhelming and overflowing quantity of SUVs on the market at the moment? A quick and easy way to cut down your shortlist is to first check out the best-sellers. And in the sub-$60,000 mid-size SUV segment, the 2015 Mazda CX-5 runs so far ahead of the competition, it’s actually snapping at the heels of other, more popular segments. 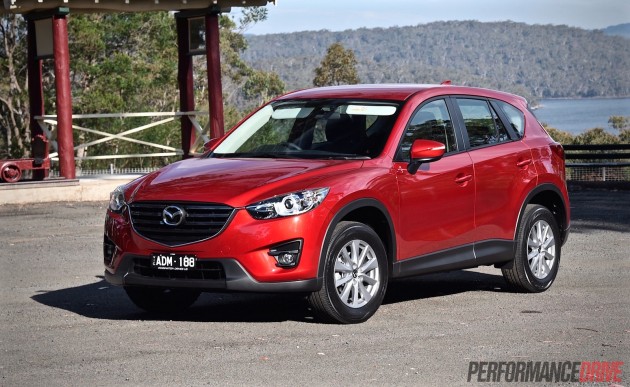 So far this year in Australia (through September) Mazda has sold 19,013 CX-5s. To give you an idea of just how popular that is, there has been 20,291 Holden Commodores and 17,167 Toyota Camrys sold in the same time frame, and that includes plenty of fleet and government sales. It of course stands ahead in its class too, topping each the Toyota RAV4, Mitsubishi Outlander and Nissan X-Trail figures by over 5000. In fact, Ford Kuga, Holden Captiva 5, Jeep Cherokee, Hyundai Tucson, Suzuki Grand Vitara, and Renault Koleos sales put together still don’t match the CX-5’s effort. Needless to say it is the best-selling SUV in the country at the moment.

Enough of the sales stuff though. The Mazda CX-5 is the Japanese company’s mid-size SUV, sitting between the CX-3 and CX9. It was first introduced in 2012 and was facelifted earlier this year, now wearing the new-look Kodo design language and drooping front grille. Mazda also increased safety and equipment for 2015.

There are four main variant levels to choose from in Australia, spanning from the Maxx, Maxx Sport, GT, and Akera. Some of these can be had with a 2.0-litre front-wheel drive petrol setup, while all-wheel drive models can be had with a more powerful 2.5 petrol or a 2.2-litre turbo-diesel. Mazda Australia says the sales are split up 50 per cent Maxx Sport, 25 per cent Maxx, 15 per cent GT, and 10 per cent Akera. 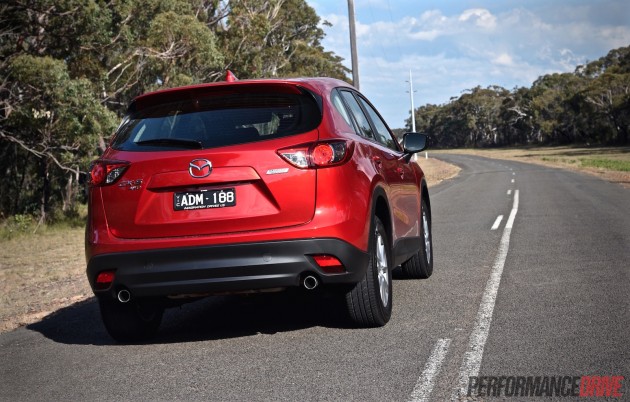 Mazda, the brand itself, is among the most popular in Australia too. Last year it came third overall. And part of the reason we think it does so well is because of the interiors it produces. All of its vehicles are filled with sporty yet user-friendly and practical decors, with modern shapes and a liberal spread of quality materials.

The same can be said for the Maxx Sport. It is perhaps the best variant of the bunch in terms of value-for-money and packaging. You get sporty seats which are genuinely comfortable and supportive – the best in the segment in our opinion – and you get a load of standard features. We like the tones and textures Mazda has gone for, including the faux carbon fibre trimmings (actually not too bad for fake stuff), and the hard rubbery material for the dash. The materials seem to express a certain cabin quietness and warmness too, unlike some of the bland and scratchy setups in rival vehicles.

Most of the on-board entertainment and functions are embedded within the 7.0-inch LCD interface system which Mazda calls MZD Connect, with a very convenient hand controller down on the centre console. Not many vehicles in this class and in this price range come with sat-nav as standard, but the CX-5 Maxx Sport does. It also comes with a fashionable suite of apps including access to social media mediums via Aha, as well as in-built music streaming services such as Stitcher and Pandora. In the Maxx Sport music is sent through a decent six-speaker stereo. A nine-speaker Bose system is available on some variants, for those who appreciate really crisp, high-quality sound.

Safety has been improved for the 2015 model, as mentioned, with all variants getting a rear-view camera, which is now regarded as a must-have for family SUVs. All variants have been awarded five stars by ANCAP, but for those who want added reassurance there is a $1230 Safety pack option. The pack for the Maxx Sport adds blind-spot sensors, low-speed crash avoidance with automatic braking technology, rear cross-traffic alert, and an anti-glare rear-view mirror.

Cabin space is at the larger end of the class. In the front you’re treated to an open and airy environment with a low cup-holder-filled centre console and storage box, while the dash is forward enough to minimise the chance of claustrophobia. Headroom and legroom is completely adequate for this size vehicle.

For the rear passengers there’s a sporty-contoured bench which features the same super-soft and supportive padding as the front seats. It is one of the most comfortable rear benches in the class, however, it’s not as roomy as the Mitsubishi Outlander’s flatter and more basic setup, for example. Cargo space is sizeable as well but it’s not quite class-leading, rated at 403 litres, or 1560 litres with the rear seats folded down. 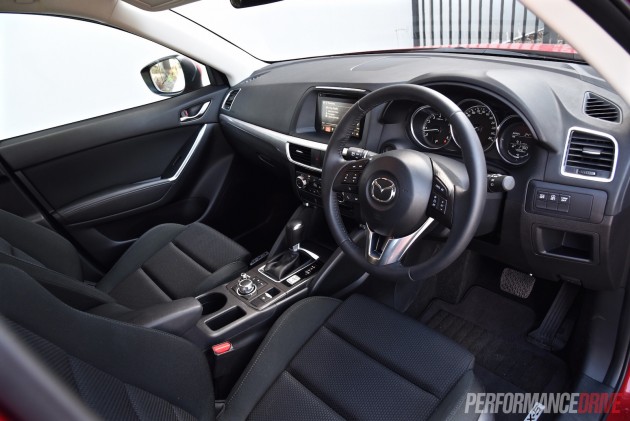 You know how we mentioned why we think Mazda does so well in Australia? Another reason we think is the handling and drive character of its vehicles, even for the mainstream ones like the CX-5. No other Japanese SUV in this class manages to feel as together and complete as the CX-5.

Without stepping too far into ‘sporty’ territory, which most buyers in this segment will probably turn away from, the CX-5 Maxx Sport offers a taut yet forgiving ride. It turns in with confidence and holds its stance, but if you encounter a bump it won’t ricochet up your spine. The steering and stability is somewhat unsettled by mid-corner bumps, but that’s the trade-off you get for being comfortable. The CX-5 walks the fine line between the two inevitable characteristics, for this price range anyway – some of the European competitors offer superior handling but they are firmer and less forgiving.

Electric power steering seems to have critics raging these days. In the CX-5, we can’t really find a perceptible fault, again, for this class of vehicle. You get sufficient feedback and it’s enjoyable enough to encourage you to take the windy mountain route over the boring freeway cruise.

As for the 2.5-litre engine, it feels energetic and is enthused quite easily by even gentle throttle application. This is especially the case if you hit the ‘sport’ mode via the cool little toggle switch down near the gear lever. In this mode the gears are held higher up in the rev range and it kicks down sooner. We’re a bit put off by the engine noise in this mode though as it does intrude on cabin ambience in a negative way. The loud engine is likely due to Mazda’s ‘SkyActiv’ technology philosophy which includes a high compression ratio of 13.0:1. Fortunately, the six-speed auto is a very nice unit. It changes up and down gears at the appropriate time and in good time.

Performance is pretty good, with 0-100km/h coming up in 8.7 seconds (as tested). There’s a reserve of torque up to a certain point (peak 250Nm at 4000rpm), but it does need to be revved for any sort of uphill overtaking or sudden moves. As a result, fuel economy is not the best. On the official combined cycle test it’s rated at 7.4L/100km, however, our week-long drive didn’t return much lower than 9.0L/100km. And that brings us to one of our main niggles we have with this vehicle. We’d recommend going for the 2.2-litre turbo-diesel option. It produces 129kW and 420Nm, only it uses 5.7L/100km (official average) – and it’s probably even quicker (and quieter) for the 0-100km/h sprint. 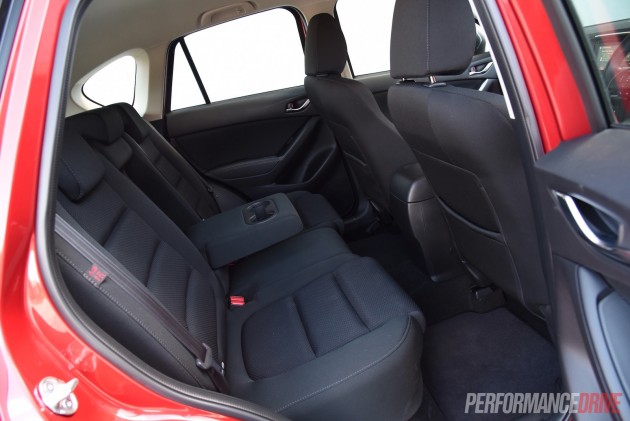 The Mazda CX-5 Maxx Sport is the most together, refined, well-equipped Japanese SUV in the class. It shows up some European offerings in terms of quality in some areas, styling, and user-friendliness, and it’s as practical as they come. The only potential downside to this vehicle in our opinion is the slightly under-class-leading rear legroom, and the fuel economy in relation to its performance. These are obviously very minor setbacks on an otherwise outstanding profile. Like we said, we’d suggest checking out the diesel model if you can. It is around $3000 more expensive but this would no doubt pay itself off later down the track.