The 2012 Holden Commodore SV6 Series II is the quickest Commodore this side of the snarling SS V 6.0 V8. It’s also the only V6 Commodore available with a six-speed manual transmission. So what’s it like? And does it provide the thrills of the SS, without the fuel bills? 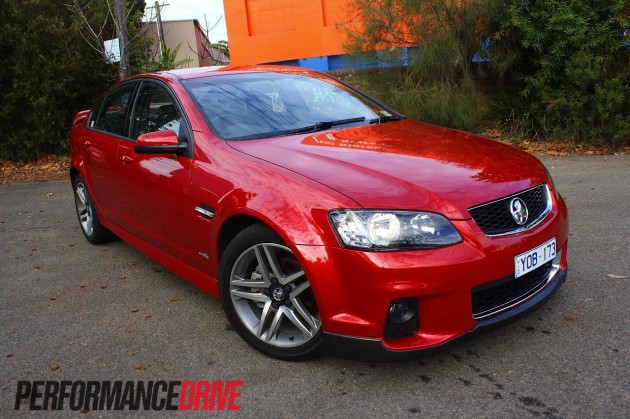 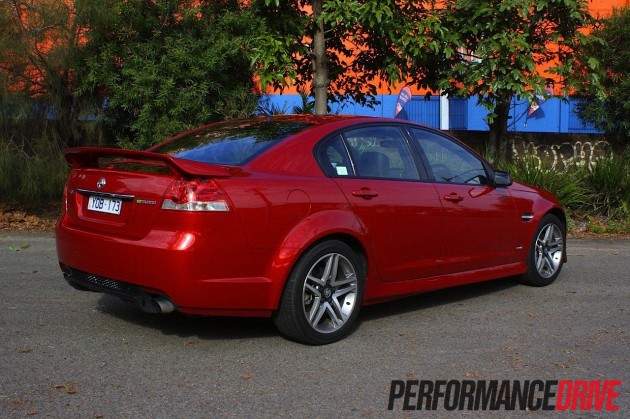 While the VE Commodore has been around for a good six years now, Holden has continued to introduce upgrades to the range to bolster what is one of the best value large sedans in Australia.

The Series II upgrades are mainly centered around the interior, as well as a few tweaks externally. The latest revisions give the model a certain fresh look and feel before the VF comes along in 2013.

As the name suggests, the SV6 model gets the sports treatment and is powered by the most powerful petrol six available in the Commodore range; the 3.6-litre SIDI (sequential ignition, direct injection) V6. It produces 210kW of power and 350Nm of torque. The engine is also available in the Calais and Calais V. 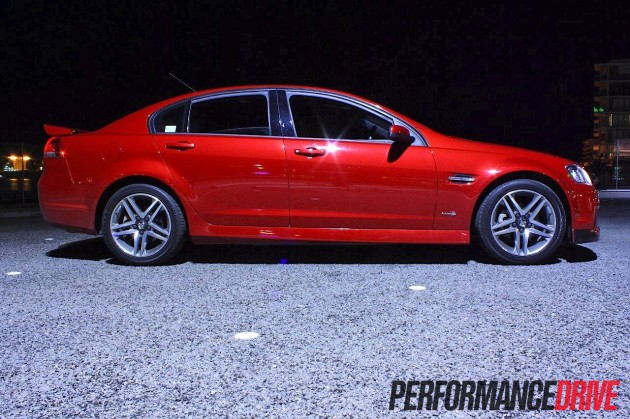 Without adding any extras, the SV6 comes with all the essentials that you would expect in a 2012 model car. The Holden iQ 6.5-inch LCD colour screen in the dash is the standout among which, and is a comprehensive piece of equipment. It’s got Bluetooth, iPod connectivity and it’ll even rip and store 15 CDs worth of music onto the in-car hard drive. Hand over an extra $990 at the time of purchase and you also get a satellite navigation system (as tested).

Once learnt, the iQ system is pretty simple to use, although, if you have quite large fingers it can be a bit tricky in terms of button spacing. We accidentally clipped the hazard lights button directly underneath the unit as well, as it’s placed right where you rest your thumb while navigating the interface. Holden needn’t place it in such a prominent position. 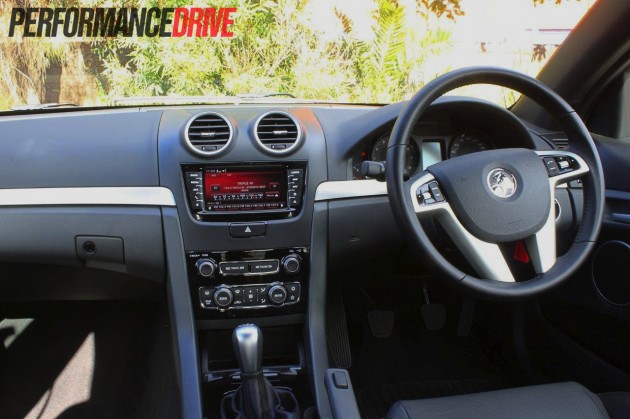 What we also found out of place were the front cup holders. With a couple of 600ml bottles in them, you have to twist your elbow like a contortionist to change gears. We’d love to see something similar to the pop-out cup holders seen back in the VY and VZ return in the upcoming VF.

The dash surround is a great improvement in the Series II. The piano black finish with plenty of chrome painted touches on knobs and switches is much nicer than the old black plastic and rubber of the Series I.

The interior plastics on the doors and dashboard are a little bit tacky and the dual canon circular air-con vents will divide opinions, including in the PD office. But if it’s complete interior quality you’re looking for, you’d be looking at the Calais anyway. If you’re a person who is less fussy on the finer details and is interested more on concentrating on the next bend, you will find the SV6’s cabin a satisfying environment. 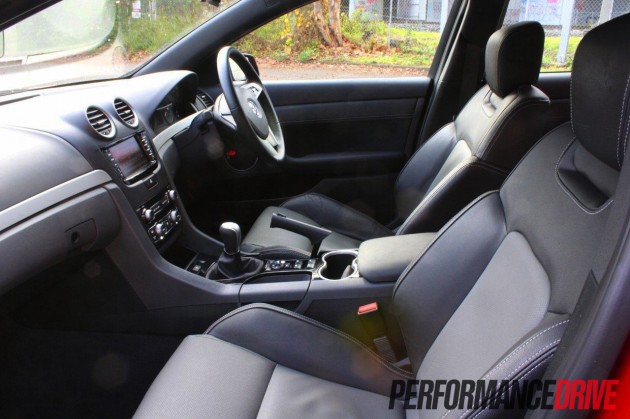 The sports seats are clearly made for big Aussie (and American?) bums. However, they offer good lateral support for those built more like a MotoGP rider than an NRL player, and for ladies for that matter. But if you are a footy player looking for a ride, you and four teammates plus your bags will fit comfortably in the SV6.

The seats come standard in cloth, while for $2500 you can option up to leather seats (as tested). We think it would be hard not to opt for the cow skin, especially as you’re paying nearly $50,000 all up anyway.

On the outside, the SV6 stands out very nicely from the base models. A set of 18-inch alloy rims, a rear spoiler, dual exhaust tips, and the optional black front lip on the VE’s beefy body with pumped guards has it looking like it’s ready for the gym. It also gets the silver highlights around the openings in the front end for the Series II, like the SS, providing a touch of style.

Our test model is covered in the dark red ‘Sizzle’ exterior paint, while many other attractive colours are also on offer to help the SV6 stand out. 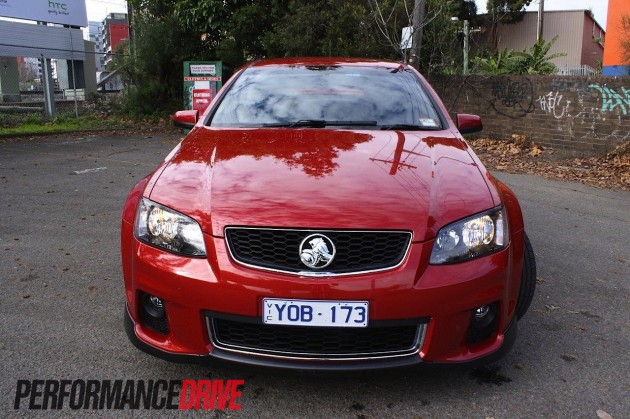 The VE had its visual critics when it was launched, but the fact is it still looks very much like a modern car six years on; kudos to the Aussie designers at Holden HQ.

As for passenger safety, the Commodore joined the five-star ANCAP safety club when the VE launched all those years ago. Driver and passenger get dual stage, side impact and curtain airbags, while the Commodore is packed with more acronyms than a rap singer convention, with safety devices such as ESC (electronic stability control), ABS (anti-lock brakes), EBD (electronic brake distribution), EBA (electronic brake assist) and TCS (traction control system).

If you skipped to this section the SV6 is going to be your type of Commodore. Especially if you don’t want the fuel bills of the V8. The 210kW V6 does its job on flat roads. Where you will miss the grunt of the extra cylinders is climbing hills or pulling along a boat or caravan. But if you’re not worried about towing, the SV6 has plenty of toe.

At around the 2000rpm mark is where the fun starts. The rev needle climbs from there to redline with a real heave, achieving max torque at 2800rpm. The power delivery is also smooth and linear. 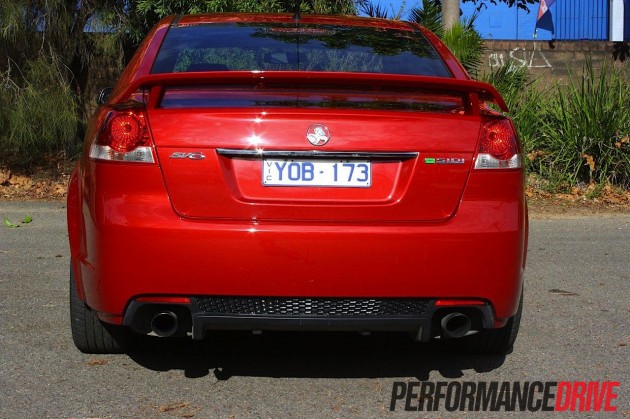 The manual gearbox is clearly geared much shorter than what you get with the V8 manual and it’s even slightly tighter than the SV6 auto transmission. What this means is on most twisty bends you’ll get away with fourth and even fifth gear and still have plenty of pull out of the corner. In other words, you really don’t need to switch cogs like a WRC driver to get the heart racing.

On the highway, sixth gear actually seems too short as well. At 110km/h you’re up at around the 2000rpm on the tacho. Making the sixth a bit more of an ‘overdrive’ gear would probably go a long way in dropping fuel consumption. Not that it’s all that bad, for a big sedan with this much power anyway.

Around town we achieved approximately 11L/100km. With a bit of experimenting and being gentle on a flat freeway, you can get it down into the 5.0L/100km range. By the end of a trip it’s likely to be around eight or nine in most real-world circumstances – the whole ‘Sydney to Melbourne on one tank’ claim is completely plausible. 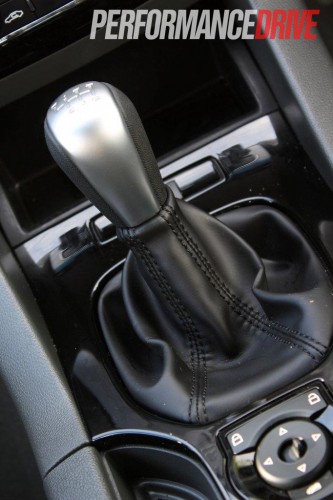 The manual transmission really had us in two minds during our test. In the city, we were crying for the self-shifter. Now that’s no complaint on the gearbox itself. The clutch isn’t too heavy and the shift is smooth and precise. The throw is also short and cogs are easy to place once you find your rhythm. As we said earlier, the 350Nm of torque will have you just lazily switching between third, fourth and fifth most of the time around town. In start-stop environments, knowing you can have the car doing it itself for no extra cost does run through your mind though.

Once you break the suburban carparks and you really get the left hand and foot working, the six-speed manual option gets you into Craig Lowndes-mode. And that’s where the auto does fall short. As we said, it’s a bit of a catch 22 situation, and it depends on what sort of driving you like.

Being a sports model, the SV6 is equipped with stiff and supportive suspension, ready for hitting the twisties. The SV6 also comes with Bridgestone Potenza 245-wide rubber (in decent condition on test). The setup is a bit harsh in terms of ride, while cabin noise is rather high on abrasive tarmac. The upshot, of course, is that it means it’s an absolute scream in the bends. 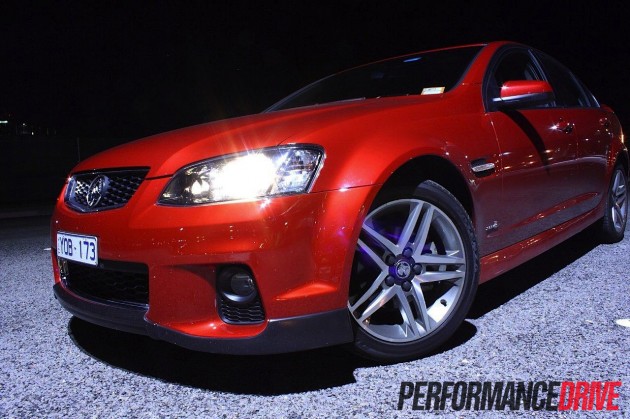 For something with four doors weighing in at 1656kg, it eats up corners very well. Steering response is instant and with all of the electronics doing their thing your confidence grows after every bend. If the road is smooth, you’ll rarely feel that it’s running out of grip, even if the corner is well off camber. It changes direction like a much smaller car and you’ll be surprised at how much speed you can carry into a bend, and how much lateral load the chassis can cope with.

Driving on anything that’s a little rough, pure physics do come into play as the contact patch is reduced. So if you carry too much speed in these conditions into a corner you will start to feel that front outside tyre ready to clock off, resulting in mild understeer. The stability control does very well in correcting this.

Under strenuous conditions the brakes do a decent job, but you do end up using the gears to help when heading into the corners; the anchors don’t feel quite strong enough to cope with all that mass, during hard driving. During downhill braking zones, for instance, the ABS did begin to vibrate through the pedal during our drives, but we didn’t experience any fade from excess heat (this could be subject to our test model only).

All up, few cars could give you this much fun and still carry an entire family.

Long time V8 owners will get a surprise at how far the humble little six-pack has come. It doesn’t have that V8 soundtrack, or quite the neck snapping torque, but it won’t let you down when it comes to passing, and general scooting about in traffic.

We think of the SV6 as the master of all compromises. If you’re too far into life to own a two-door sports car – and/or if you don’t want the huge fuel bill of a big engine – but you still want something that you can escape and feel young again in, the SV6 will do just that.

As for going for the manual over the auto, well that’s purely down to the environment you live in and how comfortable and active you like to be behind the wheel.

If you deal with a lot of traffic everyday, we’d delete the third pedal. If you live outside the city on the other hand and you love that feeling of being in complete control and in charged of the powertrain, the manual is what you need. After all, it won’t be long until the manual is gone forever. 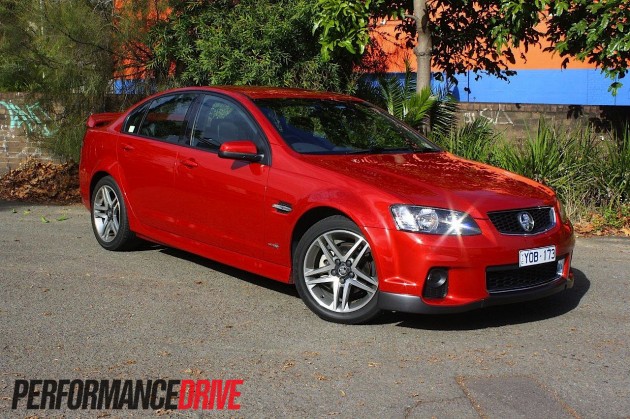 Ford Falcon XR6 FG MkII – 4.0-litre inline six cylinder, 195kW/391Nm – 1677kg – $39,990 (manual)
The Holden versus Ford battle is about half a century old. Truth is, they both make great value sedans. Its engine isn’t as powerful as the SV6 and doesn’t have quite as good fuel economy. But they aren’t separated enough to go against your usual allegiance.

Toyota Aurion Sportivo SX6 – 3.5-litre V6, 200kW/336Nm – 1555kg – $40,990
A serious contender to the Commodore and Falcon in the sporty six cylinder war. Great power and refinement but the front-wheel-drive holds it back from being a real driver’s car. 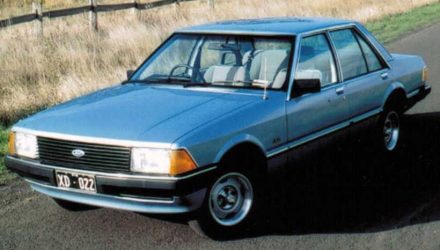 Josh Barnett specialises in motorsport and road testing. His passion for cars is long and wide, and his experience is just as impressive. Josh's work has appeared in titles such as Street Commodores and Fox Sports.