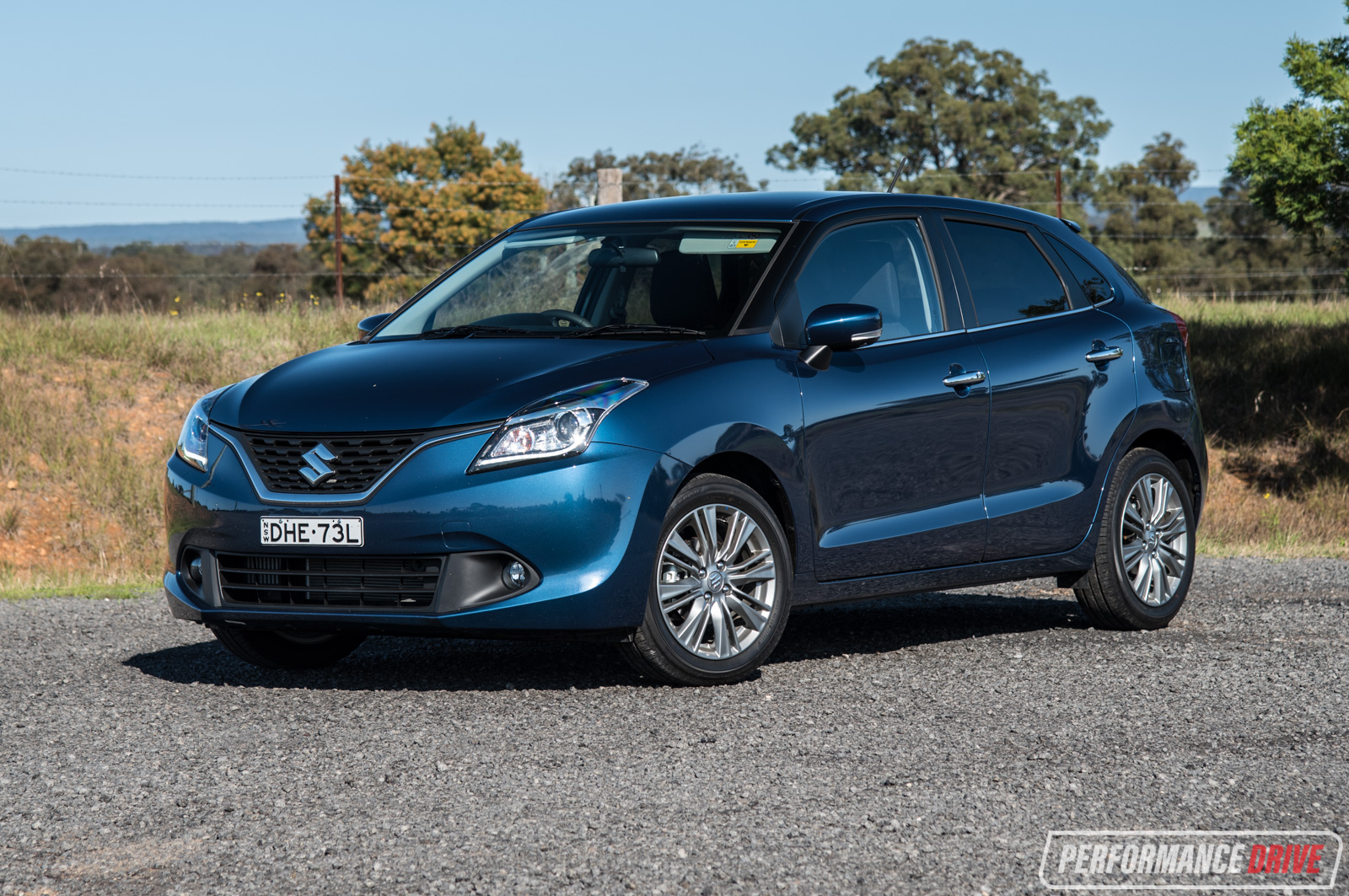 Like a moose sitting among a pack of wolves, the new, larger, Indian-made 2016 Suzuki Baleno certainly has its work cut out. It does bring some fresh ideas to the small car market though. Can it win over the swarms of customers in this segment? 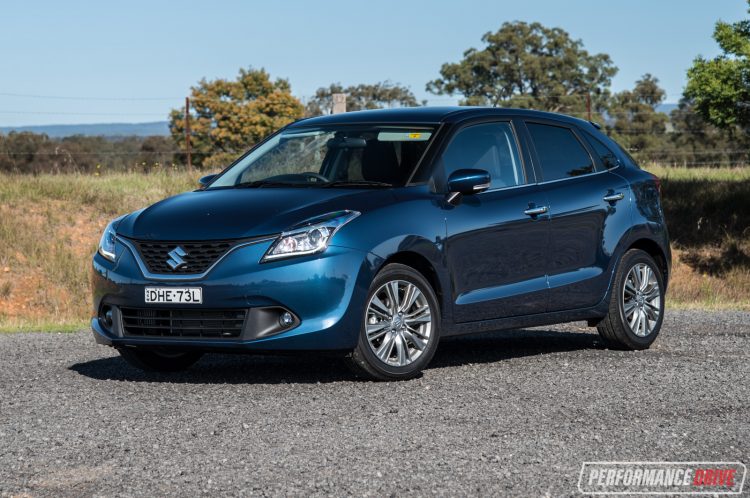 According to the Federal Chamber of Automotive Industries, the new Baleno continues in the compact car class along with the likes of the Mazda2 and Toyota Yaris. This is mainly due to the below-$20,000 starting price for most variants. In terms of external dimensions, and the price of the flagship GLX (as tested), it’s actually more in line with the big guns like the Mazda3 and Toyota Corolla. This puts a lot of pressure on the Baleno.

Prices for the base GL manual start at $15,990. Add $1000 more and you’ll get automatic, while this GLX auto-only jumps up to $21,990. The GLX does stand out with a lot more features and it gets an exclusive 1.0-litre turbo three-cylinder engine producing 82kW and 160Nm. At this price it stands desperately close to the $22,230 and $22,490 Corolla and Mazda3 base-spec auto models, respectively (manuals are slightly cheaper).

As a result of all this, we’re a bit confused as to what to compare the new model with. You can judge it against the Mazda2 and co, or the Corolla fleet. For this review we’re going to try to take a look from both angles but skew it slightly more toward the Corolla-size purely due to the price of this GLX specifically. 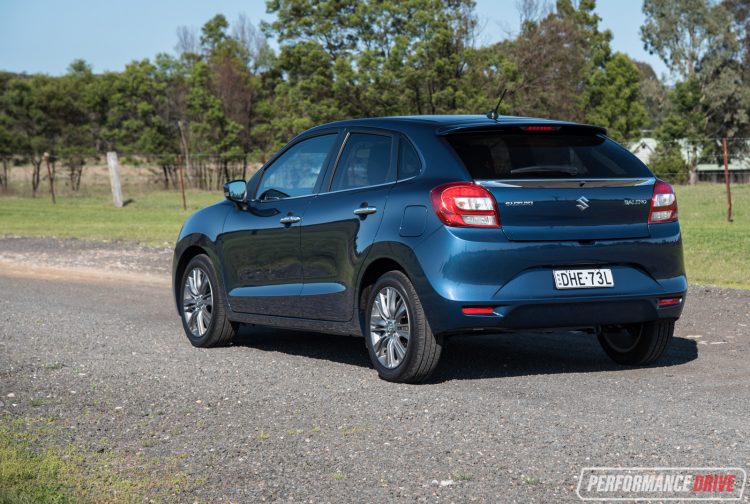 The new Baleno measures 3995mm in length and 1745mm in width, against 4330mm and 1790mm for the Corolla hatch and 4470mm and 1795mm for the Mazda3 hatch. As you can see there isn’t much between them. Where the Suzuki shines is how it manages these dimensions. In the cabin it is very open and airy, with thin pillars and plenty of room to move about. Rear seat space is particularly credit-worthy, offering more space than some of the Corolla-sized rivals.

One of the reasons there is so much room is because the layout and decor is pretty basic. The low-grade plastic door trims, for example, are narrow and the seats aren’t thickly-cushioned or liberally bolstered. Running down the centre is a low and clutter-free console with some storage pockets at the front and a flip-up armrest and storage box in the middle. There’s also a manual handbrake taking up some room, and bottle holders in all of the doors. Unfortunately, there are no climate vents in the back and no flip-down armrest in the middle, although there is a handy 12V socket. 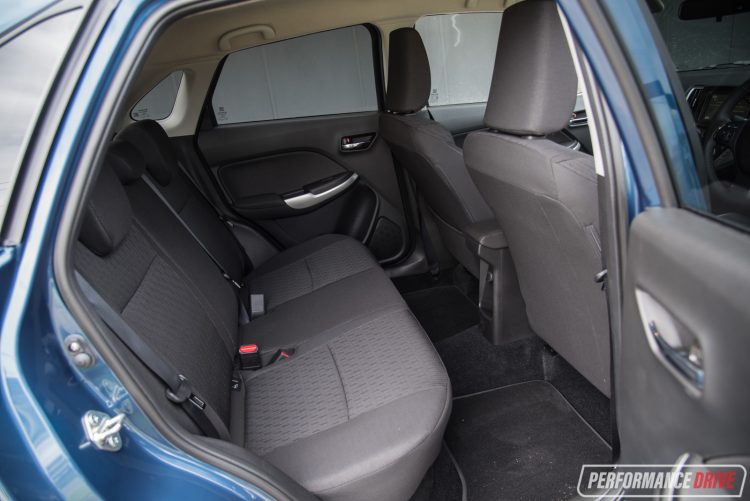 We wouldn’t go as far as saying the interior atmosphere is off-putting but it does lack quality and refinement. Only the essential is provided, with very little flair or design flourish spicing things up. Most of the grey plastic texture is repeated across the door trims, dash and centre console, making it feel bland compared with the rivals, with only some silver highlights brightening things up somewhat.

Perhaps the best element to the new Baleno GLX in terms of accommodation is the touch-screen interface. This is borrowed from other vehicles such as the new Vitara. We like the system. Sure, it’s not as advanced as some that are out there but considering the price point it packs everything you could need. Satellite navigation is standard, along with a rear-view camera and climate control. Navigating your way around menus is easy and immediately fathomable, with four main quarters at the home screen to dive into. We’re not really a fan of the LCD screen used inside the instrument cluster, with its bright blue graphics. It reminds us of the Chinese Haval SUVs. But it does add a degree of modernity. 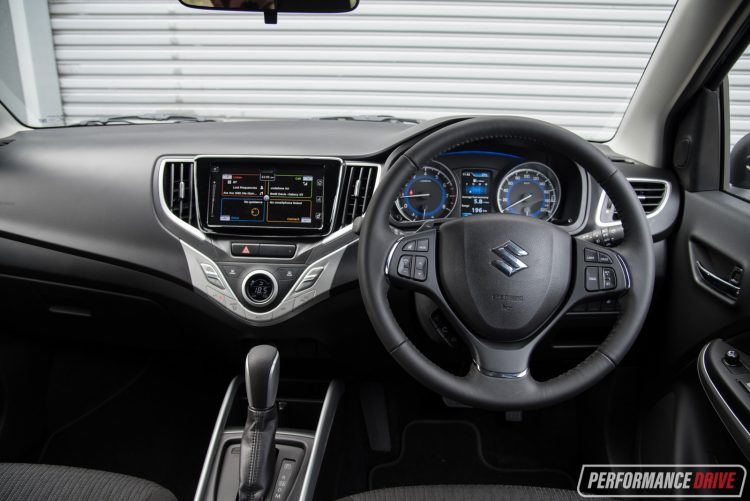 Boot space is rated at 355 litres. That’s good if you compare it with FCAI-placed rivals like the Mazda2 hatch (250L), and even more impressive if you stack it up against the larger Mazda3 hatch (308L) and Corolla hatch (280L). Our only gripe with the boot is that it is narrow and deep, meaning you do need to bend down to reach your items. Being narrow also presents some limitations in terms of the shape of the objects you’re planning to cargo. A space-saver spare wheel helps to open up volume.

ANCAP hasn’t tested the new model as yet, and we fear this is where its Indian roots might start to show some cracks (Indian vehicles are notorious for falling behind in highly-regarded safety tests). The European NCAP division has tested it and handed down a rating of four stars, which doesn’t bode well up against the popular rivals which are all five stars. In Australia the GLX comes with six airbags, stability and traction control, electronic brake force managing, a height-adjustable driver’s seat, hill-holding and speed limiting functions, and cruise control. 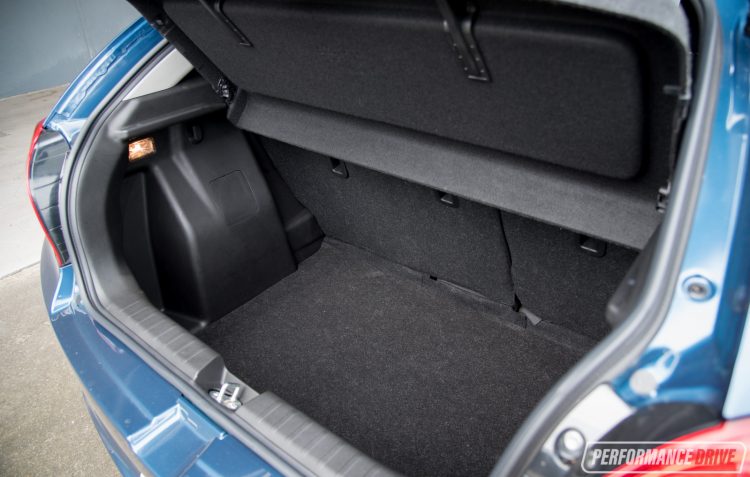 As a general run-around small car the new Baleno is a decent mode of personal transport. With its capacious cabin and generous boot, you’ll be able to cart around five in relative comfort and with as little fuss as needed. However, looking beyond a simple mode of transport, there are a few critical flaws that you ought to consider.

Most of the customary controls and foundations are of average or below average refinement. Starting with the suspension and ride quality. At the rear is a rudimentary torsion-beam layout with separate coil springs and dampers. The calibration, we feel, isn’t up to the standards of any of the front-running rivals, whether you’re looking at the Mazda2/Toyota Yaris or the larger Corolla and so on. 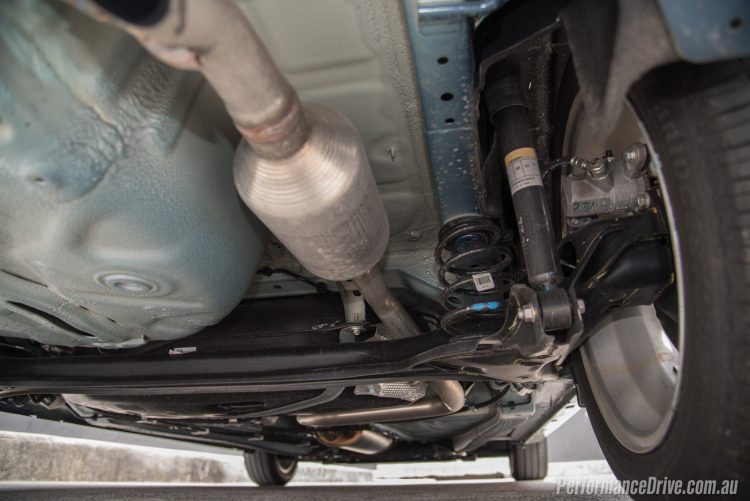 Bridge connections and road imperfections send shockwaves through the cabin, accompanied by audible absorption crashing and some bump-steer. Higher-speed stability is also poor, floating in the wind with an unsettled rear end making it (and you) feel nervous. Around long sweepers this negative sensation is only amplified, and especially noticeable if you’ve just stepped out of one of the common Japanese mainstays. Not helping is a vague steering setup. You’re often dealing with moments of nothingness on-centre with delayed response and only snippets of communication.

So, how about that quirky little engine? It is very economical, that’s one certainty. We averaged 5.6L/100km on test and we think you could expect around 6.0L/100km in regular city use. This is great for real-world economy and compares well with even some of the European rivals. 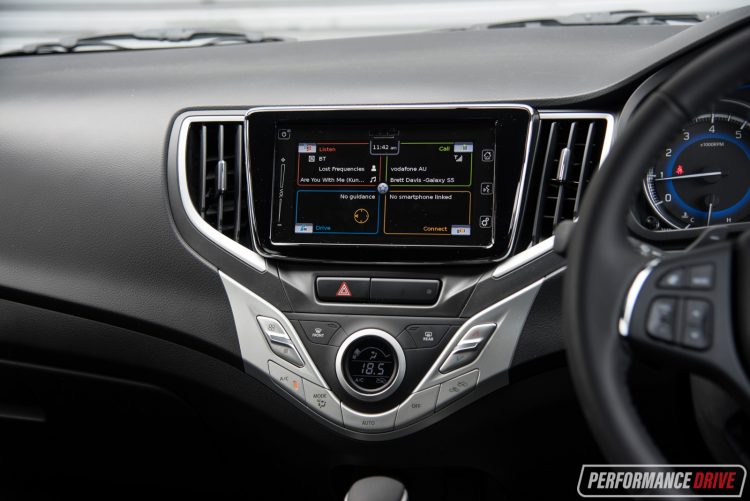 Engine torque is surprisingly strong with good mid-range, providing its maximum 160Nm between 1500rpm and 4000rpm. If you give it full throttle you will be struck by an unusual – and not very appealing – engine note. We’ve driven plenty of 1.0-litre three-cylinder cars before, and most are quite fun, producing a spirited and energetic thrum as you skip along. The unit here doesn’t sound nice at all. It’s reminiscent of an old belt-sander in fact, and it generates plenty of displeasing vibration. It seems like there hasn’t been much engineering in the insulation department either to try and drown some of this out.

Again though, the actual performance and outputs are rather decent, and the economy is brilliant. We timed 0-100km/h in a respectable 9.67 seconds, which isn’t too bad compared with 9.4 seconds we’ve achieved in the 103kW CVT automatic Corolla, for example. Any praise in this area should probably be directed to the weight; the GLX tips the scales at just 955kg (tare).

We wanted to really like the new Baleno with its interesting turbo engine and quirky design. As a stand-alone product, perhaps in a second-world country, the new Baleno could be seen as a useful piece of transport. However, up against the ever-rising standards set by the similarly-priced rivals, the new Baleno in GLX form falls short in most areas in our opinion. Even if you’re a loyal Suzuki customer, we do recommend you at least test drive some of the rivals before signing the dotted line here.

The fact that it technically sits in the smaller and cheaper compact class (according to VFACTS) doesn’t help if you’re looking for sheer affordability, although it is definitely one of the largest in that class. We think if this GLX was priced from around $19,000, it would make a lot more sense. But sitting above the $20,000 sweet spot places it in the firing line of the more thoroughly engineered and extensively-evolved competitors.