Welcome to quite possibly Australia’s most insane Lamborghini Gallardo to ever grace the land, and the country’s first Gallardo to feature a Heffner twin-turbo package. Built by the guys at RamSpeed in Sydney, this ‘LP 840-4’ Italian exotic goes, sounds, and looks truly out of this world. 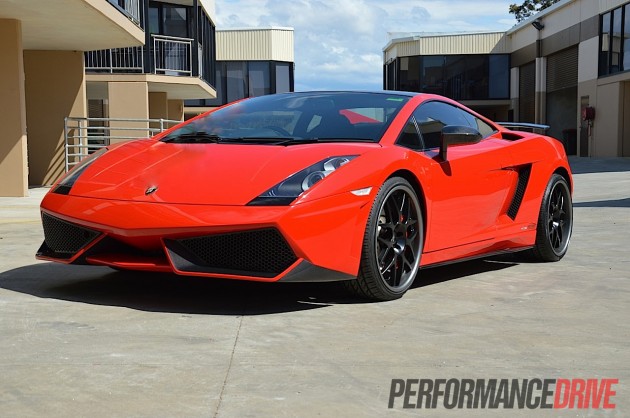 As you might have guessed judging from the ‘LP 840-4’ name, this RamSpeed beast is packing some serious grunt. On the dyno the car has had trouble laying down a definite figure, however, on a mild tune it produces a massive 840hp (626kW) and 910Nm. How? Let’s go through the build to find out.

The project started with a 2006 Gallardo fitted with a six-speed manual transmission, as a base. It was then stripped apart with the engine taken out, while most of the rear end was dismantled to accommodate the epic Heffner twin-turbo package, shipped from the US. 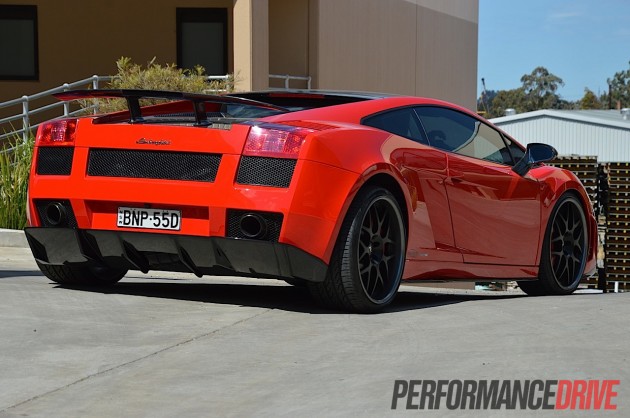 It consists of two 62/65 ball bearing turbocharges with 46mm Precision wastegates, a Heffner A/W intercooler, and a Heffner ceramic-coated three-inch exhaust system (full specs at the bottom of the page).

From start up to redline the engine sounds like a cross between a jet taking off and Formula One car. It’s one of the most surreal sounds you can imagine, and then you come to realise it’s coming for a street registered motorcar that you could potentially drive to work everyday. 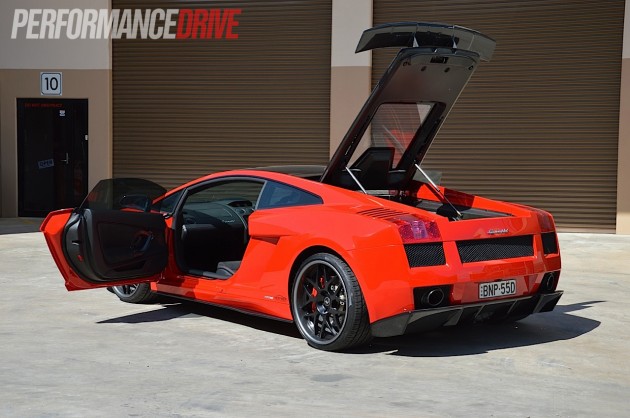 It’s hard to believe, just looking at the finished product in the flesh, that the Italian exotic was pulled apart in the first place. Everything is to such a high quality standard, you could almost mistake it for a production model. 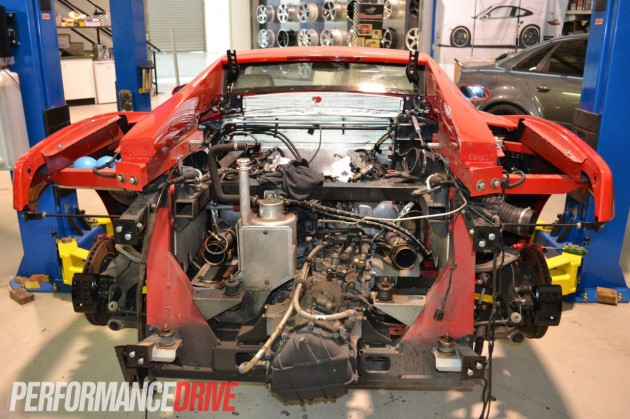 That is, of course, until you take a peek under the rear hatch. Sitting at the most southerly end of the engine bay are the chrome intercooler pipes and turbo dump pipes. 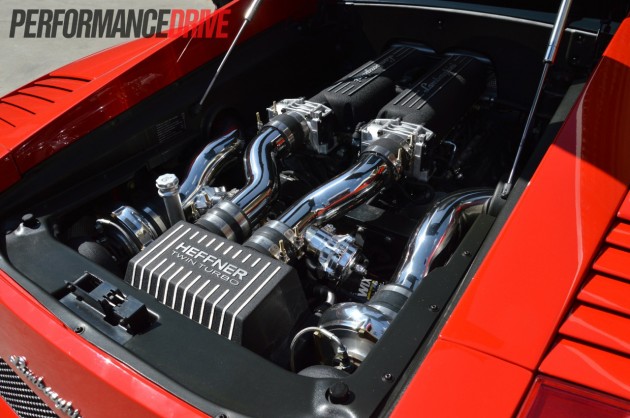 To better understand what this car is all about, and to comprehend just what 626kW means, we were lucky enough to tag along on a drive in the monster.

Trundling about in traffic, the car is quite conventional. Apart from the lumpy idle, which RamSpeed tells us is hereditary for all Lambos, you wouldn’t really know this is an extensively tuned vehicle. It’s not until pressure is put on the accelerator that things become more noticeable, especially on back off as the wastegates and blow-valves chirp and sneeze. 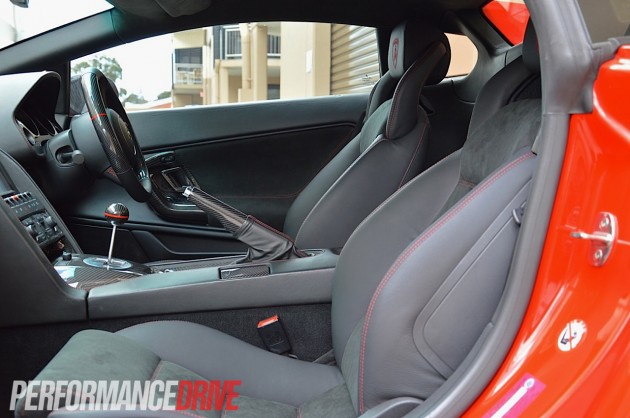 First gear is over in a manner of one-to-two seconds, after you adjust the throttle to ease wheelspin, while second gear pulls like a train that’s been struck by lightning. There’s wheelspin in second gear as well, but even then, the Gallardo remains firmly focused on getting to the horizon as quick as possible, pulling you along with serious g-forces.

We’re probably going to keep coming back to it but it’s the sound that really heightens the sensation. A V10 Lamborghini is always going to be stimulating, but with two turbochargers whistling and gushing away, it’s one of those cars that has you shaking your head in awe. It echoes and shrieks up the road like a cataclysmic event erupting the street. 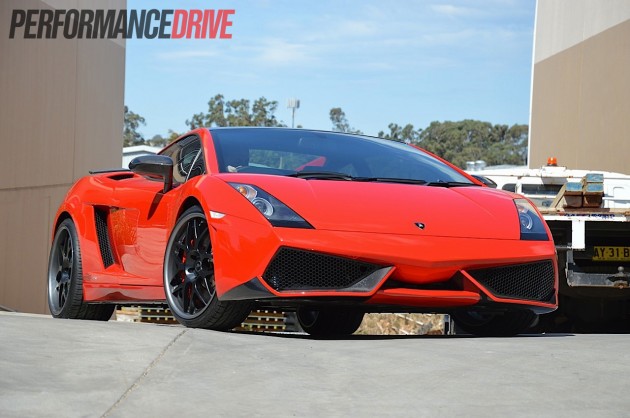 When you step out, it’s equally tremendous to look at as it is to be propelled in. The car is simply stunning to behold, it’s almost too overwhelming to be able to take it all in on first glance.

Intricate details you might miss include the mesh grille along the entire rear face of the car; the carbon fibre side skirts, and the louvers above the rear wheels which extract heat. 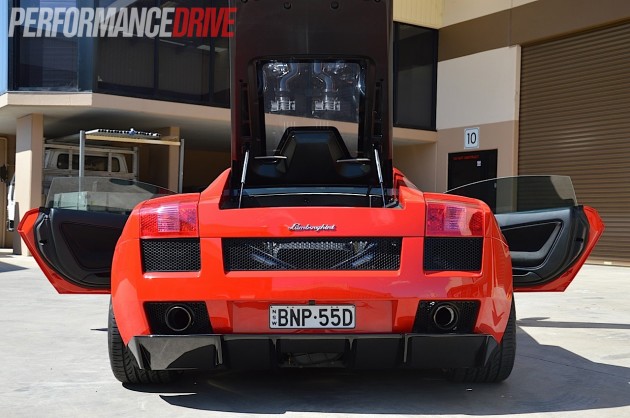 The body features various revisions to give it a fresh look, such as an LP 570-inspired carbon fibre rear wing and front bumper bar, with some clear indicators updating the finer details.

The rest of the body features a 2012 LP 570-style carbon fibre bodykit which is made locally by RamSpeed here in Australia. It’s a bespoke kit that is inspired by the Gallardo Super Trofeo. At the front sits an aggressive nose with two large intakes at each corner, while at the back is a race-car-like carbon splitter and diffuser which spurs out like piece of weaponry. 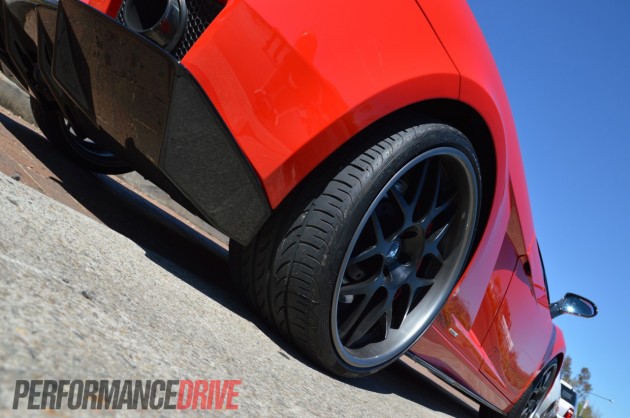 Topping off the visuals are a set of 20-inch forged alloy wheels painted in matt black with gunmetal lips. They expose the huge disc brakes with red-painted calipers, and are wrapped in 245mm tyres on the front and 305mm tyres on the rear.

Inside, RamSpeed has given it a complete makeover as well, with a custom in-house retrim in black Alcantara and leather with red stitching. A Lamborghini logo has been painstakingly woven into the headrests. 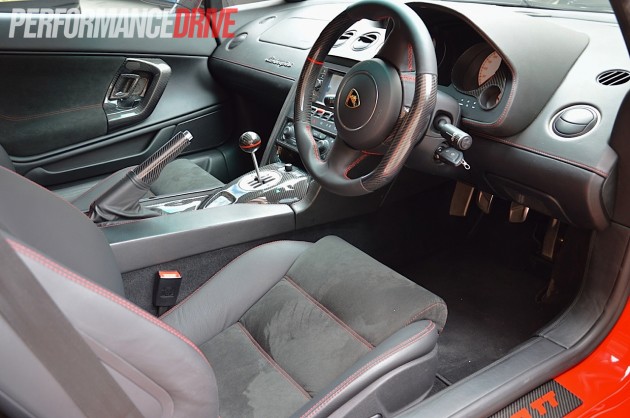 Overall, you would have to agree, this is one of the most stunning street car packages around. It’s got the looks, the sound, and, with the twin-turbo kit, the performance to blow even super sports bikes out of the water. 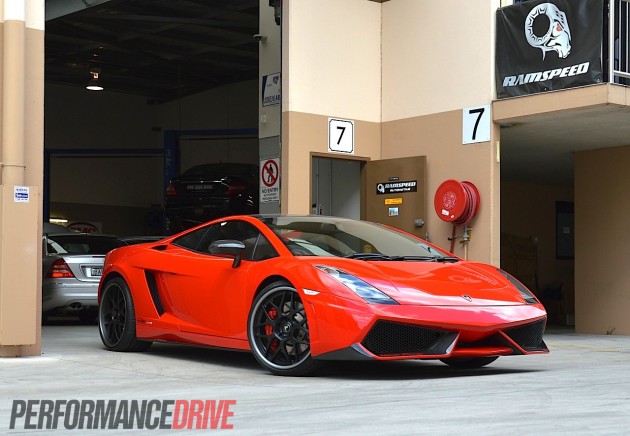 Click play on the video below for a quick overview and drive impression. The video includes a couple of easy acceleration runs at no more than half throttle.
(As much as we would all like to see this thing go under full power, on the street, the national speed limit comes up in just a few seconds. It would be interesting to see what it would achieve down the quarter mile.)

Head over to RamSpeed’s website for details on this and plenty of other high end high performance tuning upgrades.