Nissan deserves a pat on the back for having the guts to design a compact SUV that stands out. While the 2014 Nissan Juke Ti-S design is daring, it’s certainly refreshing. It’s getting to the point with today’s SUVs where all we can do is pick the size… ‘would you like that in small, medium, large, or extra large, sir?’ 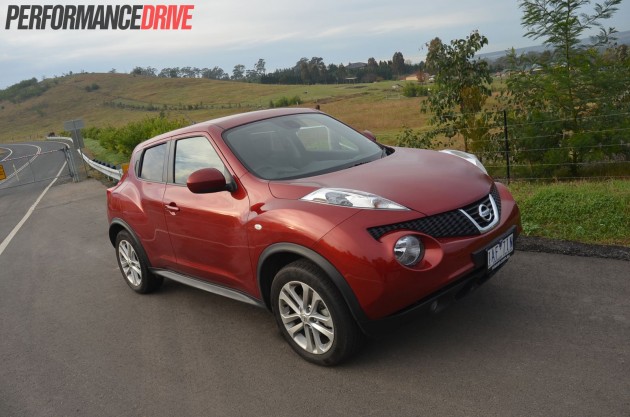 The Juke might be new to Australia but it’s been rolling out of overseas showrooms since 2011. It’s built on the Nissan B platform, the same platform used for the Nissan Pulsar and current Renault Clio.

The ST-S and Ti-S share a gutsier 140kW/240Nm turbo four-cylinder (same engine found in the Pulsar SSS), with the ST-S using a six-speed manual while the Ti-S comes with a CVT auto. The Ti-S is also the only variant with 4×4 on-demand technology. 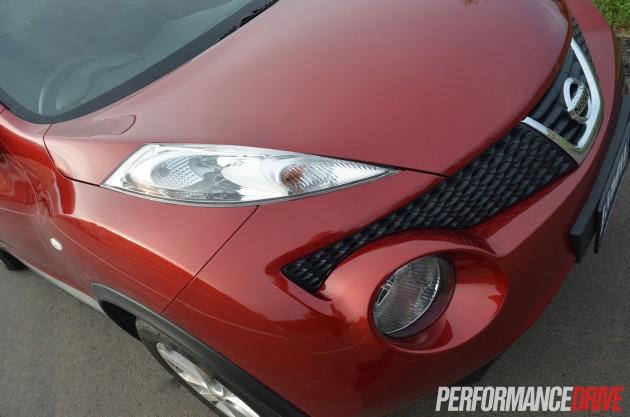 What initially looks like a small package is actually rather sizable once you jump in the driver’s seat. Front passengers will appreciate the easy-to-slide in access and tall supportive backrests. The lack of a centre armrest is a crime, but no doubt it’s been left out to keep the cabin airy. The leather seats feel soft to touch, but tough enough to withstand a kid or two.

While the rear does lack some headroom for taller passengers, legroom is fine and the seat is comfortable.

So given it’s super-compact on the outside, but roomy on the inside, where’s the shortfall? The boot. It’s very narrow and really only large enough (201 litres for AWD Juke, 354 litres for 2WD models) for a small pram and a few bags of shopping. Forget the golf clubs if you have rear passengers. If you don’t have rear passengers you can lay the 60/40 split-fold seats down and away you go.

If you like large coffees, the cup holders are big enough to swallow a super-size. There’s also deep storage pockets in the doors that can hold a large bottle.

The interior design doesn’t exactly follow on with the car’s courageous exterior, but it’s not a deal breaker. All of the buttons around the driver are clearly marked out. Well, all except the interchangeable climate and drive mode controls. It’s confusing at first, with every button changing function when swapped, but you get used to it. The first few times you’ll scratch your head as to where the climate controls have gone. 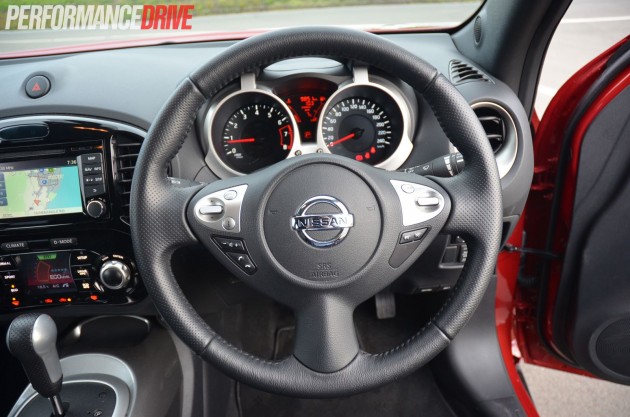 Nissan sure does know how to make a good-looking steering wheel that is nice to hold with enough buttons within thumb’s reach. What’s not good is the lack of reach adjustment for the steering column, only height. Too bad if your eight-year old wants a drive.

Connectivity-wise, all of your Bluetooth devices can be paired up to the car’s infotainment system, which also includes satellite navigation, USB and aux input, as well as a reverse camera. The system itself is a bit on the clunky side, but it does the job. The volume knob would be better if it were on the right side and not the left.

Other standout features on the Juke Ti-S include keyless entry, heated front seats, and rain-sensing wipers.

Like the Nissan GT-R, the Juke’s glasshouse gets narrower from front to back, gently sloping downwards to resemble the profile of a helmet. Because the rear door handles are located on the c-pillar, the Juke is easily mistaken for a coupe.

The large wheel arches dominate the car’s appearance from most angles apart from the front, where the lack of a proper headlight design means the fog lights steal your attention.

Whether you like the look or not is up to you, but like we said at the start, it’s certainly refreshing to see some quirky and interesting shapes out on the road. 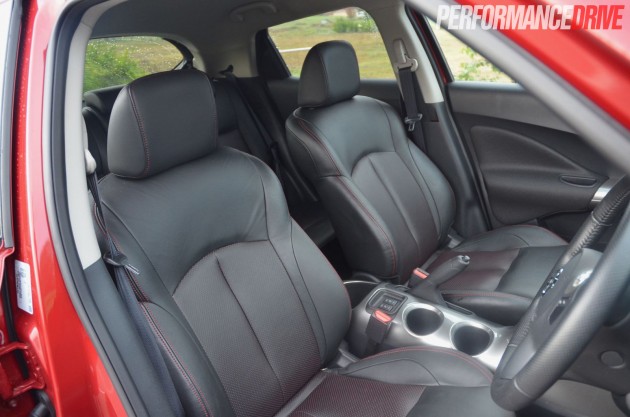 Under its cartoon-like exterior is a well-balanced, dynamic chassis that feels active and ready to pounce. It’s made for people who like to sit up high and like to dart through the city – because let’s admit, nobody is buying a Juke to drive across the Nullarbor.

The steering feels quite connected for a compact SUV, and responds to small inputs by the driver. It’s well weighted out on the freeway and at car park speeds.

There are three drive modes on offer in the Ti-S; two-wheel drive (front), variable, and four-wheel drive. For most applications, we found the Juke is best left in front-wheel drive, not only for its fuel saving measure, but it offers good enough dynamics that you rarely find traction issues. For loose-surface roads, opting for variable, where the system will only send drive to the rear wheels when slip is detected, is the best bet.

The Ti-S is the only model in the lineup to get a multi-link suspension arrangement at the rear. All other Jukes feature a torsion beam setup. As a result the ride is plush and remains planted when pushed, which is handy considering the 140kW on offer. The odd large pothole will upset the ride, but it’s definitely not spine jarring.

With its 1.6-litre turbo four-cylinder lifted straight from the SSS Pulsar, the Ti-S has enough poke to leave a lot of cars dead in their tracks. Especially other compact SUVs.

Nobody, including us, expected the Juke to run a 0-100km/h time of 7.4 seconds. We did it a handful of times just to make sure it wasn’t a mistake, like we always do for all vehicles that we test. But it’s not the standing-start sprint that is its best asset. It’s the combination of the rev-happy engine and elastic CVT transmission that make it fun. 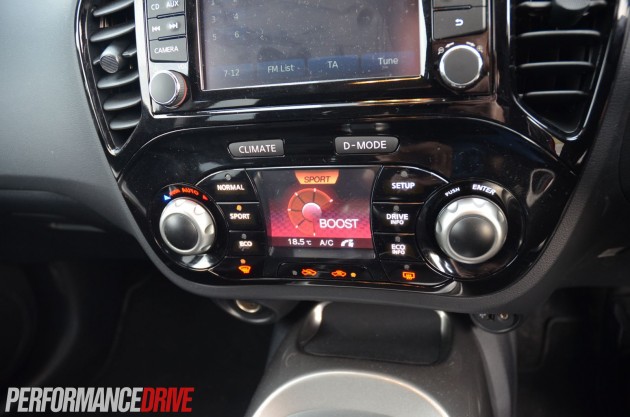 We’ll be the first to admit that it’s not often we take to liking any car with a CVT transmission, especially not small ‘sporty’ compact SUVs, but in this application, with this engine, the combination is effective and well matched. The CVT can be left in full automatic mode or it also offers a manual mode that’s quite engaging, allowing you to slot up and down eight step gears. The changes are quick and precise.

There’s little we can pick on with the engine. The torque band starts early and maintains a strong mid-range thanks to its 240Nm on offer from 2000rpm to 5200rpm. Effortless bursts of acceleration on demand are only half a prod away.

The Juke sipped an average of 9.3L/100km during our week with the car. It’s not too bad considering we were pushing the engine more than needed most of the time. We’d expect figures in the low-eights to high-sevens if driven with caution. The official average is 7.4L/100km.

The petrol tank is quite small at 46 litres. This means if you drive it hard you can expect to fill up every 430km or so.

The Juke is great as a city runabout for the simple fact it’s easy to park. You get good visibility through the front, though the small rear window can be painful, and the short overhangs front and rear mean you can fit into tight spots quickly without fear of banging into things. 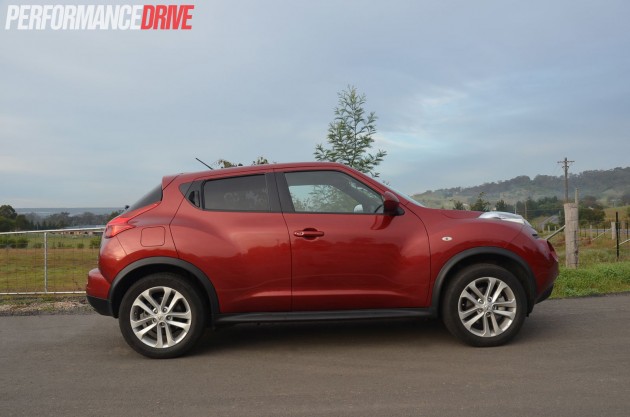 Without a doubt the Juke Ti-S is the standout in its class if you don’t require much boot space and put road dynamics first. It’s a comfortable compact SUV that offers plenty of poke, and it isn’t afraid of a bend or two.

In Ti-S trim level, it also offers enough creature comforts to keep you happy, and your backside warm. Question is, could you dare to be different and live with the styling?

CONS:
– Styling not to everyone’s taste
– Lack of centre armrest
– Boot is tiny and very narrow 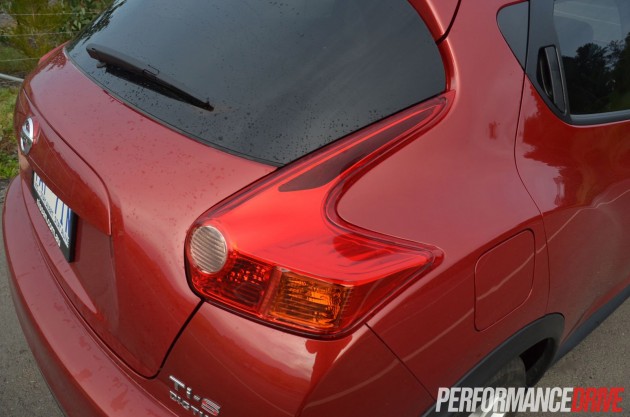 Putting the all-new 2022 Hyundai Tucson to the tes

Just picking up the shopping... #mclarengt #every