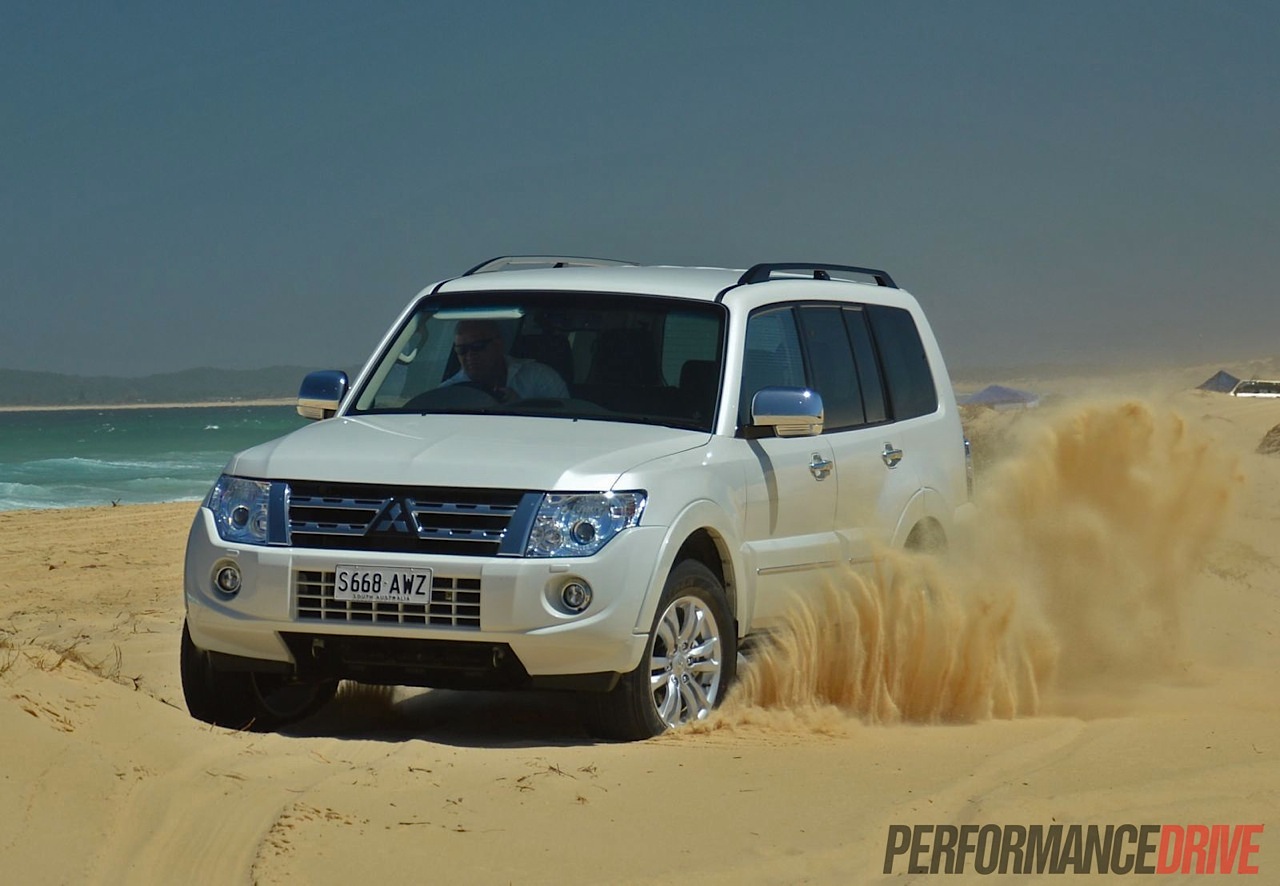 One of Mitsubishi’s longest running models has just been updated and now comes with more technology and safety, and one of the most comprehensive mechanical off-road packages around. Welcome to the 2014 Mitsubishi Pajero Exceed – also known as the Swiss army knife of the SUV world. 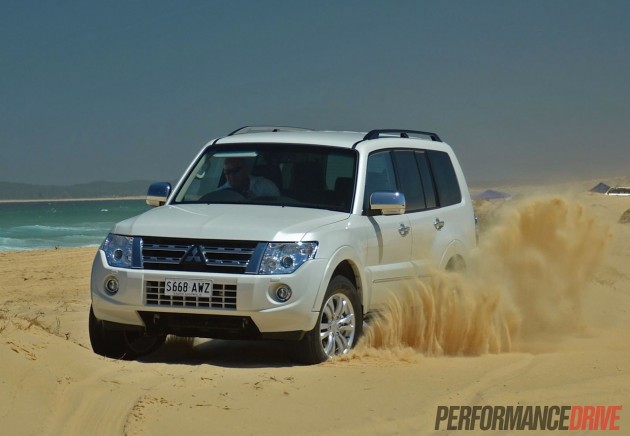 This is now the fourth generation Pajero, and although styling hasn’t changed much since its conception in 2006, there is now more technology and features on board than ever before. You may have been given advice that buying a later version in a model’s lifecycle is the best as it’s the most complete iteration. This applies in full right here.

The Exceed is the top-of-the-range model in the four-tier lineup. It’s the most expensive and the most equipped. All variants come with the same 3.2-litre turbo-diesel four-cylinder, producing 147kW and 441Nm, and all feature an all-encompassing and heavy duty part-time four-wheel drive system. 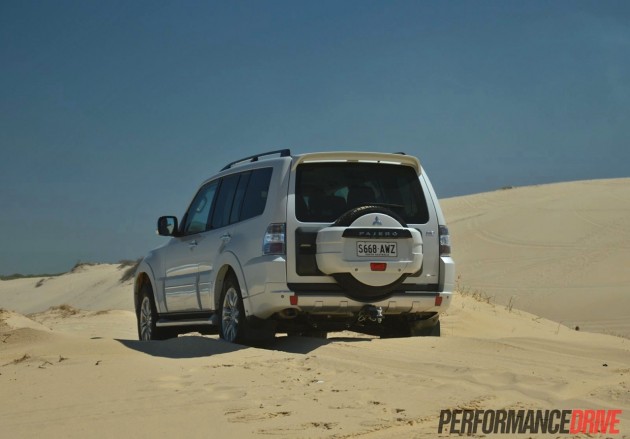 It’s a very family-oriented cabin inside the Pajero Exceed. The ride is high and the window sills are low, providing excellent vision for all passengers. The ceiling is also high so it doesn’t matter if you’re an NBA star or Danny DeVito (or Muggsy Bogues?), you will feel comfortable and at peace with the interior environment.

Nestled in the rather basic and ageing dash is a new Multi-Communication System (MMCS) touch-screen interface with 3D satellite navigation and a reverse-parking camera as standard. The interface is able to control most on-board functions except the front and rear climate control, which is situated lower down with a straight-forward yet user-friendly layout. Air vents for the climate control scale the inner corners of the ceiling, with vents for second and third-row seats.

For the Exceed, buyers get to experience a new 860-Watt, 12-speaker Rockford Acoustic Design stereo system with a kicking sub-woofer in the cargo area for deep doof-doof sounds. It’s a nice unit that is easily capable of transforming the large cabin into a bit of a moving party room.

In the second row of seats legroom and headroom is boundless, while a flip-down nine-inch DVD player keeps passengers happy and entertained in between destinations. It comes with two sets of wireless headphones – those in the third row miss out, unless they buy their own.

Speaking of the third-row seats, the two-seat bench is only suitable for children. Legroom is restricted due to a high floor, which pushes knees sky high. There aren’t many seven-seaters around that are accommodating for adults, apart from the monstrous and much more expensive Mercedes-Benz GL-Class and Toyota LandCruiser. The mechanism to lift and lower the third row is a little cumbersome and requires two hands to operate. 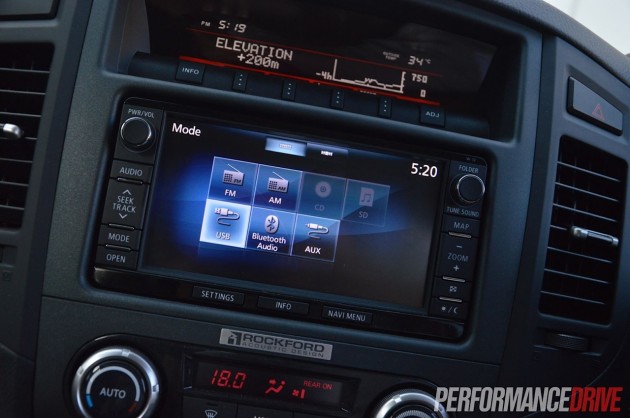 Overall, the interior is a little bit basic compared with its rivals. The wood-printed panels on the dash and door trims do little to fancy up the decor, and the leather upholstery is more hard-wearing than luxurious. It has to be kept in mind that this is a rugged vehicle; introducing more pampering qualities might not be worth the risk of hindering this personality, in case they are too brittle for the occasion.

Dusk-sensing HID headlights on the Exceed are a welcome touch, while the body-coloured bumper bars, chrome exterior trimmings, and 18-inch alloy wheels help to distinguish this as the top-line variant. All 2014 models are also kitted out with enough safety devices to keep ANCAP pleased. It’s been awarded a five-star rating.

If you’re in the market for a Pajero, chances are, you’re interested in going places that are knee-high deep with mud and creek water, or places that are scattered with mounds and rocks that are the size of small hatchbacks.

For you, your eyebrows will rise and rise and your eyes will open wider and wider with every specification you read. There’s differential locks for the centre and rear. There’s a two-stage low-range transfer case. And there’s gauges for current elevation, ambient atmospheric pressure, and a complete trip computer with economy and temperature readouts. In other words, it’s probably more prepared for an adventure than you are. 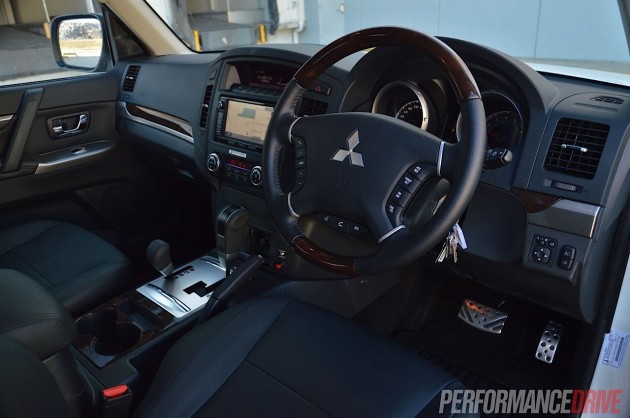 You can immediately feel the heavy duty nature of the Pajero. The steering requires a lot more turns lock to lock than your average car or even SUV. This helps when you’re covering tough terrain but it is tiresome in and around the city.

Surprisingly, the suspension and ride isn’t as agricultural as you might think. Underneath is a fully independent front and rear suspension setup. It’s all bolted to a rigid ‘RISE’ (reinforced impact safety evolution) monocoque body with an integrated one-piece chassis.

In the front, the ride is commendable, absorbing anything from speed bumps to nasty potholes with little impact on ride. There is some aftershock, however, this could be isolated to this test vehicle which has almost 6000km on the clock – it might be in need of new dampers due to repeated journalist testing.

Handling is not usually a word in an SUV’s vocabulary. And with the Pajero, there isn’t much handling to talk about. It leans into corners with its high centre of gravity and the long-winded steering rack certainly doesn’t provide any kind of engaging feedback. You tend to give it some slack though, especially when you experience its ability to venture anywhere off road… even at the beach. 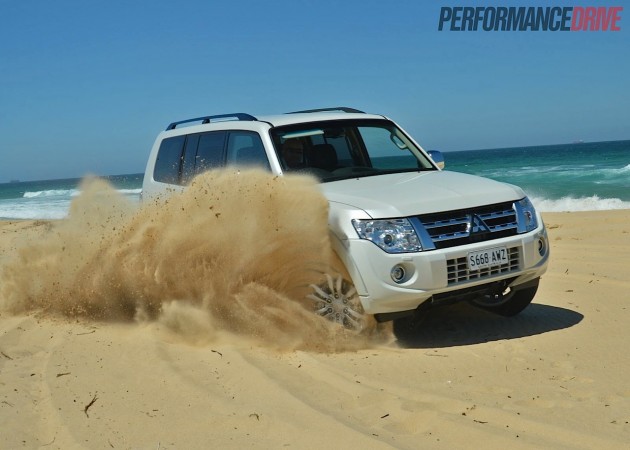 Thick, soft sand is no contest for the Pajero. It simply swims over the stuff like it’s a hovercraft. Letting around 50 per cent of the air out of the tyres certainly helps, and engaging the centre and rear diff locks pretty much makes excessive wheelspin impossible.

Approaching steep inclines from the front is one of the Pajero’s master skills, with its short front overhang and 36.6-degree approach angle. Departing is a little tougher, with a longish overhang and 25-degree depart angle. So long as you have the optional heavy duty towbar fitted, you have nothing to worry about.

The engine supplies enough torque and power in its rev-range sweet spot of around 2500-3000rpm. We timed 0-100km/h in 10.7 seconds. Amusingly, the turbo four-cylinder lets off a sneezing wastegate sound when the turbo dumps excessive boost pressure.

Water crossings are fun and with a fording depth of 700mm, you can get right amongst it with some of the best 4x4s in the industry, even modified ones.

The 225mm ground clearance means it can clamber over logs and rocks as good as if not better than most of its competition; Ford Territory (175mm), Holden Colorado 7 (217mm), Jeep Grand Cherokee (up to 218mm), Nissan Pathfinder (229mm), Toyota LandCruiser Prado (220mm). Even if you snag an obstacle, there’s an abundance of high-strength protective plating underneath to keep components safe. 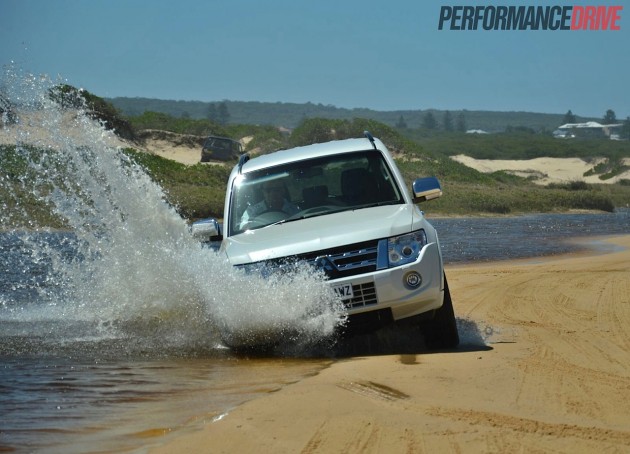 At no point does the Pajero feel out of its depth off road, no mater what you throw at it. About the only limitation is that rear overhang, which actually measures up well against its rivals. It’s a brilliant off road piece of equipment and one that will continue to be loved by 4×4 enthusiasts for years to come.

As a family transporter, fuel economy is reasonable for a vehicle of this size and stature – we averaged 9.8L/100km – and the cabin environment is friendly and robust enough for most situations.

The best aspect of this vehicle is the utter competence and skill during off-road driving, and, perhaps more prominently, the piece of mind of Mitsubishi’s five-year/130,000 warranty.

If you’re interested in this because you’d like a luxury SUV for cruising about, you’re better off looking at some of the less-4×4-capable yet more deluxe/stylish and visually attractive SUVs in other segments.

CONS:
– Tiresome steering; too many turns lock to lock
– Not as luxurious as the competition, cheap plastics/materials inside
– Heavy side-hinge tailgate 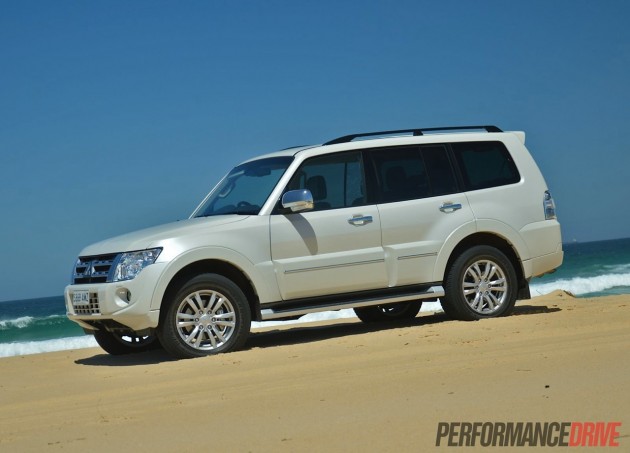